What Your Favorite Junk Foods Look Like When Rebranded for Hipsters 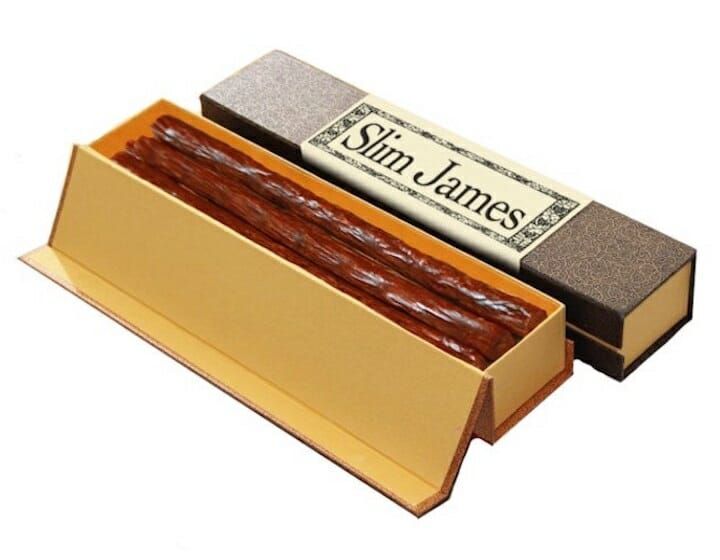 Hipsters and junk food don't mix. After all, how's one supposed to fetishize obscurity when stuffing one's mouth with the same Twinkies that have been enjoyed by generations of squares for almost 90 years now? Besides, try squeezing into skinny jeans after squeezing a few of those spongey, sugary, cream-filled tubes into your throat. And don't even get unnecessarily bespectacled Brooklynites started on whether the fruit in Fruit by the Foot is locally sourced (or even fruit at all). Which is likely what inspired Dan Meth, a talented and hilarious artist who's worked for BuzzFeed among others, did the marketers of some of the world's favorite garbage snacks an enormous favor by rebranding them as hipster junk foods to tap into that sweet, sweet, ever-lucrative hipster market.

Twinkies are literally the gold standard of trash food. Nothing about them feels natural. Ask yourself: What seems in your brain to be the more likely source of Twinkies: that a baker baked them in a bakery, or that astronauts discovered them in an alien’s nest in a space forest on the dark side of the moon? I think you know the answer. Twinkies are probably not of this world.

[dx_custom_adunit desktop_id="RTK_K67O" mobile_id="RTK_5yk0"] One of the hallmarks of junk food is individual wrapping. There’s no hope of dignity in eating dessert after you’ve desperately clawed it out of some crinkly cellophane. That’s why hipster Twinkies aren’t wrapped, but placed lovingly in a decorative box. You don’t frantically extract these snack cakes from some crass, plastic wrapper. Instead, you select them from their artisanal packaging. You’re so discerning.

Everything about the Cap'n Crunch's Crunch Berries box screams at you. First, there are the crunch berries themselves, whose colors read like warnings. Then there’s the visage of the Cap’n, in which his eyes appear to be silently crying out for rescue. And the disembodied demand to “CRUNCH-ATIZE ME, CAP'N!” carries deeply discomfiting sexual undertones. The whole package is violently threatening.

Now this is more like it. This version of Cap’n Crunch is an invitation. I’m lounging on my porch swing with a bowl of Crunchberries and a mug of steaming coffee. Sunlight dissolves the dawn mist as a cool breeze off Narragansett Bay welcomes me to the morning. I hear the muted call of a seagull in the distance. I am serene, a sense of peace rippling through me from the anahata. I close my eyes and accept the soft release of death. Thank you, Cap’n.

[dx_custom_adunit desktop_id="RTK_K67O" mobile_id="RTK_5yk0"] “Macho Man” Randy Savage has been dead since 2011, yet can you even read the name of this product without hearing his voice hollering at you to “SNAP INTO A SLIM JIM”? Almost no amount of rebranding could reverse this association in ‘90s kids’ lizard brains of nasty gas-station meat with hyper-aggressive commands to eat it, just eat it, you f--king jackal.

The only branding redirection left open to Slim Jim, then, is the most drastic of all: a name change. But since hipsters live pretentious lives of arch formality anyway, this is an elegant solution. Not only does it put a sock in Mr. Savage’s phantom screams from beyond the grave, it also lends a wholly unearned air of sophistication to a truly vile snack that remains, essentially, mashed-up and dried-out cow a--holes.

Dunkaroos may be the Platonic ideal of ‘90s junk desserts. They’re basically just Teddy Grahams that come with a tiny tub of nasty frosting, but the packaging was perfectly designed to sell to stupid little third-graders. All they did was trade those boring teddy bears for something that resembles Poochie the Dog but as a kangaroo, and suddenly every boomer mom had to listen to their bratty millennial kids shriek all through the supermarket for this garbage.

[dx_custom_adunit desktop_id="RTK_K67O" mobile_id="RTK_5yk0"] Those millennial brats didn’t get any smarter when they got older. This packaging applies the same principles to a generation of snot-nosed kids who grew up into insufferable hipsters. The box looks like a shipping container, so it has that exotic, imported-from-Down-Under feel. But it’s also deluxe, so dummies will happily fork over a 4,000-percent markup for it, forcing them, out of the need to shield their pride, to pretend it’s not revolting shit.

For a hot minute in 2010, Four Loko was all anyone could talk about. Because this caffeinated alcoholic beverage was so potent that sales were restricted or even banned. Human nature being what it is, the restrictions led to a wave of interest in the drink, and kids started buying up all the stock to throw Four Loko parties. Everyone who attended a Four Loko party woke up the next day with the worst hangover of their lives. And that’s how they learned that not only was Four Loko of questionable safety, it was also basically sewage.

The main thing of hipsters is wanting to look sophisticated, ironically or not, without having any actual taste at all. Four Loko was packaged and marketed for young boneheads who party irresponsibly without apology. But pour that same exact swill in a fancy wine bottle, charge quadruple, and watch hipsters line up around the block to buy it by the case and act snooty about it.

[dx_custom_adunit desktop_id="RTK_K67O" mobile_id="RTK_5yk0"] Just about any ‘80s or ‘90s kid has fond memories of Nerds, the candy detritus whose packaging anthropomorphized literal crumbs into adorable pals. They’re the quintessence of everything that appeals to kids about candy while revolting adults: Brightly colored, mess-making and cartoony. And they boasted the unique but pointless feature of combining two flavors in each box.

The secret to tricking hipsters (and there’s no group easier to trick) is to make everything look handmade and artisanal. It doesn’t have to actually be handmade as long as it looks that way. Hipsters aren’t anywhere near that discerning. Throw some garbage in a brown paper bag and make a small fortune selling it online to idiots in their 20s.

Fruit by the Foot, Before

For some reason, ‘90s kids were obsessed with getting their candy in tape form. Bubble gum? F--k you, Bubble Tape. Fruit Roll-Ups? Nah, we want that s--t by the foot. Fruit Roll-Ups were already a nicely processed step away from generic fruit leather, the most disgusting-sounding snack of all time. But it was still too close. Stretch it out into a tape, make the coloring even brighter and less natural, and then kids really wanted this garbage.

Fruit by the Foot, After

[dx_custom_adunit desktop_id="RTK_K67O" mobile_id="RTK_5yk0"] Fruit by the Foot is a tough nut to crack for the artisanal-minded hipster, since the natural inclination is simply to take two steps back into the world of homemade fruit leather. But that’s more “survivalist lunatic” than truly hipster. So keep the “by the foot” concept and package it like some overpriced AF pomade. And just for good measure, change the name to French. Nothing’s more hipster than surface-level Francophilia.