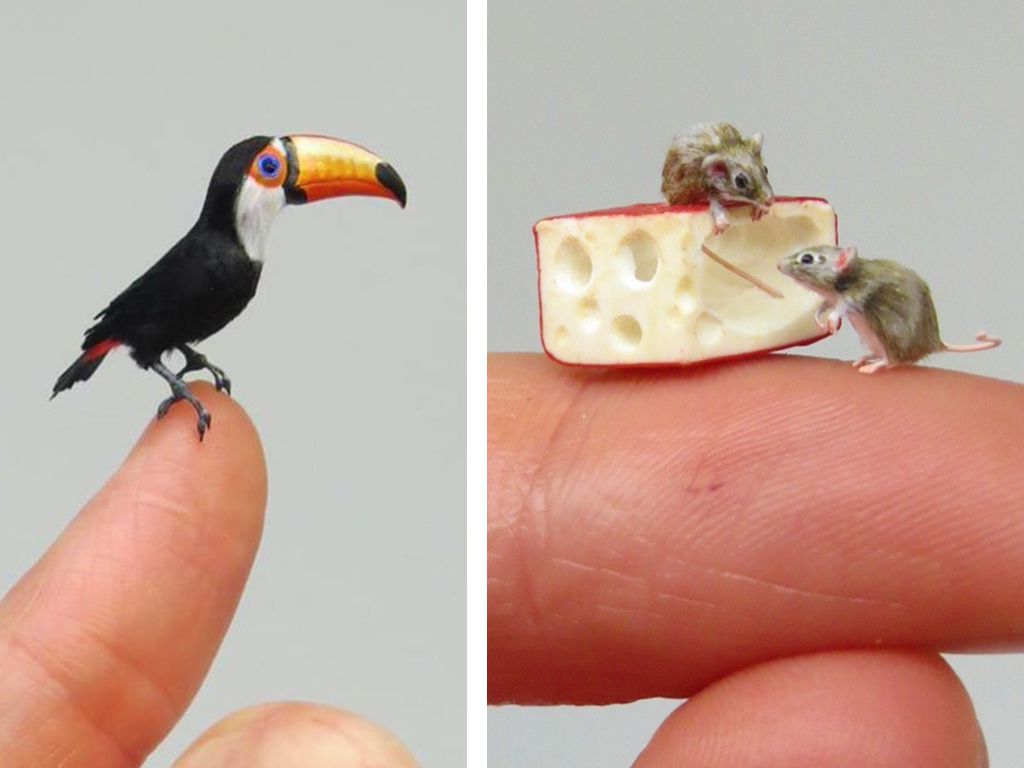 To truly recreate any object in miniature form, you have to pay attention to the smallest details. That’s something Hungarian miniature artist Fanni Sandor knows first hand because this biologist worked in various nature conservation projects.

But once her kids were born, she started dedicating herself to creating miniature works of art that are so intricate, they'll blow your mind. Lately, Sandor has been focusing on accurately recreating miniature animals that you’d swear were the real thing.

As a biologist and nature lover, Fanni Sandor is very familiar with all sorts of species. So, she uses the knowledge from her career as inspiration to recreate tiny animal sculptures, like this miniature owl that looks so realistic, you'd swear it was photoshopped. Even the sharp claws look real!

During an interview, Sandor said: "In my twenties, I saw professional miniaturists' work for the first time through the internet. I was completely fascinated. I realized there are a lot of miniature lovers who live around the world, and some of them are making miniatures at an artistic level. That was the point when I decided I wanted to be a professional miniaturist and I wanted to make art with my works."

It’s a Lizard of a Day

"I'm used to drawing, painting, and sculpting, so I had the basic skills which are needed for this art form,” she said. Sandor practiced day and night until she mustered up the courage to show her first new generation of miniature work to the world. "In my work, my most important aim is to produce realistic and detailed representations," she explained.

Although these chipmunks aren’t as anthropomorphic as the adorable Disney characters, they’re cuter than a puppy at an animal shelter! No attention to detail was spared when putting these sculptures together. Sandor even made some cracked nuts to make it seem like the chipmunks were having a feast.

Duckling and the Butterfly

"The first step of making miniature animals is collecting a lot of pictures of the animal species I want to sculpt,” said Sandor about the intricate process she goes through to build these sculptures. “After that, I make a few sketches of the animal. The drawing is very important, because it’s much easier to sculpt if you do some study drawings of the subject.”

"I crazy-love miniature things, ever since my childhood," she added. But this isn’t a new hobby, either. She did her first miniatures when she was 6, but Sandor didn’t turn it into a profession until later in life. And judging from this adorable mini-mouse hiding away in a slice of bread, it’s safe to say she found her calling.

The details of the two hummingbirds are impressive enough, but the flowers are so realistic, they look digitally edited. For Sandor, mastering this art involved honing her basic artistic skills with her love for miniature art. After tons of practice, she managed to perfect her miniature artwork.

Her Work is for the Birds

The attention to detail in her pieces is simply insane. These Budgerigar birds look truly genuine, especially the scalloped markings on the nape, back and wings. But how long does it take to make these miniatures?

The Eagle and the Fish

The complexity of her miniature art pieces varies, but it often takes anywhere from two days to a whole week to complete one sculpture. It's safe to say that this eagle capturing a fish must have taken at least a whole week. And look at the way the water looks. It’s like the eagle had literally dragged the fish out of the water.

The hedgehog alone looks real right down to its tiny black eyes, button nose and thin lips. But Sandor took this sculpture a step further and built a realistic looking nest where it could rest. She told Bored Panda that: "The nature-based subjects inspire me principally, so mostly I make lifelike animals and plants."

Sandor shared how she sculpts her miniature masterpieces, and it's definitely an arduous task. “For sculpting, I use paper embossing tools and pin ending tools,” she said. “After baking, I add more details to the sculpture with my carving tools.”

This is One Foxy Miniature

“It’s very important for me that I paint the finished sculpture very detailed; however, the fur or feather coat will cover the paint,” she said. “And the last step is the furring or feathering. I attach the fibers or feathers to the body with a strong glue. The legs are made of wire."

Check Out These Hole-y Mice

That cheese looks good enough to eat. No wonder those mice are hanging around there! Oh wait! It’s just another one of Sandor’s recreations. She currently has about 29.8 thousand followers on social media, but that’s not the only thing she’s proud of.

Sandor’s work on her miniature animals even earned her an honorable and well-deserved title. "In 2014, when I thought my miniatures were good enough, I applied for the IGMA Artisan title in the animal figures category, and I got it. (IGMA—International Guild of Miniature Artisans was founded to promote fine miniatures as an art form),” she joyfully explained. Hey! We'd be proud too!

This Bird Is a Rebel

Creating miniature figures, like this bird who’s perched on a “no fishing” sign while holding a fish in its mouth, is no easy feat. In 2016, she was honored for her work again. “After two years of hard work, in 2016, I was awarded the IGMA Fellow title (this honor is given to those whose work is the epitome of excellence) and I was over the moon.”

A Small Toucan of Appreciation

Most people would probably give up within the first 15 minutes of creating an art piece like this. So, these fabulous miniature sculptures must require a ton of patience. Clearly, Sandor is someone who loves what she does and is a master of her own craft.

A Quick Splash and It’s Off

The bird is without a doubt beautiful. Just look at the way the water appears to splash right underneath. It’s as if the bird has literally taken a quick splash in the water right before flying off. Sandor obviously has a steady hand for such intricate work.

These mini possums are wonderful. A lot of people would get irritated trying to make these, but Sandor did an incredible job and nailed every detail. From the color of their fur to their pink claws and right down to the tails, it's like looking at a composite photo.

A School of Ducks

This school of ducks may be the most adorable thing you’ve ever seen. Not only are there two different sets of ducks, but she also crafted six tiny ducklings, two of which are completely mesmerized by a miniature butterfly.

Sonic! Is that you?

Sandor continues to amaze her followers with miniature creatures like this tiny hedgehog who’s just as cute as it can be. You gotta love those tiny paws! It’s amazing that someone would even think about trying to sculpt such a tiny creature, let alone accomplish it.

These tiny creatures are truly magical. It’s difficult to imagine the patience and skill that Sandor used in order to achieve this level of perfection. This one’s simply magnificent and a bit frightening at the same time.

This mouse must be stocking up for the winter. It’s standing on top of a bagel which is on top of other types of tiny breads. And who said mice only eat cheese? This one appears to be quite fond of pretzels, too.

A Nest for Robin

Sandor created a nest out of a miniature bowl with a Robin bird standing over it. Now this is talent! It’s hard to pick a favorite because this artist is able to achieve so much detail in such a tiny art form.

Miniaturist artists like Sandor are total art wizards. This is someone who has managed to recreate real animals like this owl in such a way that you often can’t see all the details without a magnifying glass.

Some of Sandor’s work is so realistic that it almost seems as though she’s frozen these creatures in time and miniaturized them, like this frog that’s in the process of eating that fly. It’s so whimsical and wonderful, we can't take our eyes off it.