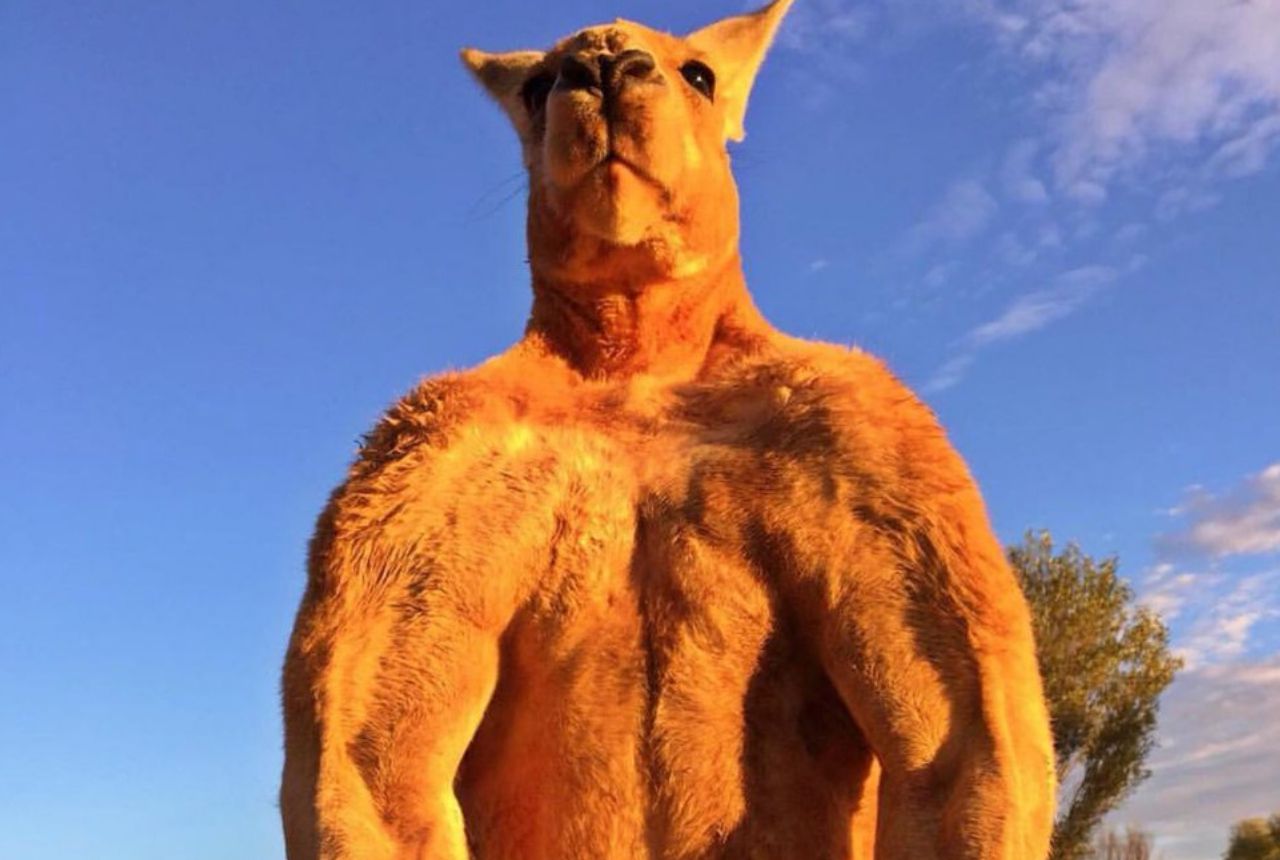 It's the end of an era. After a long and healthy life, internet celebrity kangaroo Roger has passed away. The kangaroo became famous for his enormous muscles, but this was only one part of his life story. So now, the internet is saying goodbye to Roger in a very heartwarming manner.

Roger the Kangaroo was once possibly the internet's most famous marsupial. After growing to an impressive stature, he became the basis for bodybuilding memes and jokes.

[dx_custom_adunit desktop_id="RTK_K67O" mobile_id="RTK_5yk0"] Roger once stood at an impressive 6 feet, 7 inches tall. When he was at his full strength, he was a sight to be reckoned with, although he chilled out a lot in later life.

Roger's best human friend, Chris “Brolga” Barns, is a huge fan of kangaroos. In fact, he's founded a sanctuary to look after rescue kangaroos like Roger who can't be rehomed in the wild.

Roger may have been impressive to behold as an adult, but his life was almost over before it truly began. Barns rescued him from certain death one fateful day on an empty highway.

[dx_custom_adunit desktop_id="RTK_K67O" mobile_id="RTK_5yk0"] Barns found Roger on the side of the road as a tiny newborn joey. His mother had been killed, and he didn't stand a chance at survival, so Barns took him home. Back then, Barns had no idea how big Roger would get.

Barns wasn't unprepared to look after baby Roger - he had opened his own baby kangaroo rescue service the previous year, and played host to lots of tiny bouncy animals.

Kangaroos start out life incredibly small, in spite of how large they grow as they get older. Barns' love of pintsized creatures meant that he was able to look after plenty of small kangaroos, but they then faced a problem.

[dx_custom_adunit desktop_id="RTK_K67O" mobile_id="RTK_5yk0"] Hand-reared kangaroos can't be successfully returned to the wild, as they've become too reliant on humans. So while Barns could save these baby animals, there was no place for them to stay as they got older. Thankfully, Barns found a solution.

As Roger continued to grow, Barns founded the Kangaroo Sanctuary, a place for rescue kangaroos to spend their lives in peace and safety. Naturally, the enormous Roger became the alpha male of the group.

There are plenty of kangaroos at the sanctuary, and not all are quite as big and broad as Roger. These animals are allowed to live a relatively normal life, even if they do have more contact with humans than would be common in the wild.

[dx_custom_adunit desktop_id="RTK_K67O" mobile_id="RTK_5yk0"] Barns' life is far from normal - tiny kangaroos bounce around all over his house, playing with toilet paper and getting into mischief. As they get bigger, they're not given quite as much free reign and spend less time in human bathrooms!

Ripped To The Max

Roger was exceptionally strong, growing to a huge size. As the alpha, he wouldn't let Barns get too near without acting aggressively, which was a good sign - it meant he hadn't become too domesticated by his life at the sanctuary.

The super strong kangaroo won the heart of the internet for his impressive physique, with people all over the world wanting to learn more about Roger and his family.

[dx_custom_adunit desktop_id="RTK_K67O" mobile_id="RTK_5yk0"] All of this attention ended up bringing a lot of interest to Barns' sanctuary, with visitors coming from across the globe to see Roger and the other kangaroos playing together. This helped Barns to expand his efforts, helping to protect more kangaroos that couldn't be returned to the wild.

Sadly, Roger's life was never going to last forever. The strong kangaroo kept his muscles to the end, although he was a lot more docile and slow after losing leadership to another kangaroo.

Finally, Barns released a video online explaining that Roger had died. All at once, there was an outpouring of love and condolences from across the internet.

[dx_custom_adunit desktop_id="RTK_K67O" mobile_id="RTK_5yk0"] Professional news outlets and interested onlookers alike expressed their sadness at Roger's passing. The tributes came from far and wide, as everyone bid farewell to this enormous kickboxer.

Many expressed how Roger had been an inspiration to them, showing what can be achieved when we work hard to overcome our challenges. By going from a tiny abandoned joey to becoming a huge, hulking alpha, Roger taught his fans a lesson in resilience.

In a tribute on Twitter, one of Australia's biggest news websites, news.com.au, stated: "It's a sad day for Australia... One of our greatest icons, Roger the ripped kickboxing kangaroo, has passed away. RIP buddy."

[dx_custom_adunit desktop_id="RTK_K67O" mobile_id="RTK_5yk0"] Barstool Radio said of the kangaroo's passing: "RIP to Roger the Kangaroo... 12 jacked years with us were not enough."

Meanwhile, Twitter user Stephanie (@Hubba__Bubba) said: "Rip to the world's most famous kangaroo :( my dreams of going to Alice Springs to see Roger are now shattered."

But life moves on. Roger's son, Monty, is even taller than his father, and just as broad. It's clear that while Roger is gone, his legacy remains intact.

[dx_custom_adunit desktop_id="RTK_K67O" mobile_id="RTK_5yk0"] For now, Barns is enjoying reposting pictures from Roger's heyday, both of him flexing to show off his muscles, and relaxing on the warm desert sand.

Goodbye, Roger - you will be missed. So long, and thanks for all the memes.