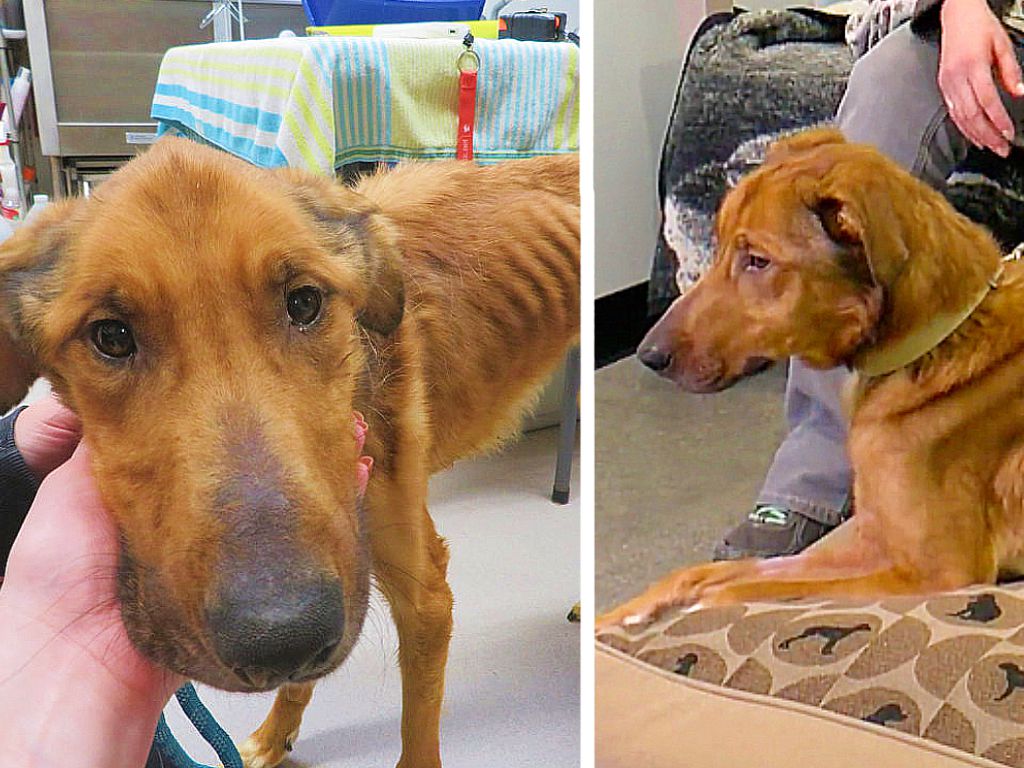 The poor animal weighed just 23 pounds, when a dog his size should weigh as much as 70 pounds. The deputy immediately took him for emergency treatment.

A deputy sheriff in Dunn County, Wisconsin made an unexpected discovery by the side of the highway at the beginning of November: an extremely malnourished dog who needed immediate help. The dog was in such bad condition that it nearly seemed as if it was too late for him to get the help he needed.

At the Brink of Death

The poor animal weighed just 23 pounds, when a dog his size should weigh as much as 70. The deputy immediately took him for emergency treatment and the diagnoses were worse than he expected.

Jamie Wagner of the Humane Society says that Gabriel's condition was the worst the shelter had ever seen. He was emaciated to the point that there was barely anything left of him. He could no longer do the activities that most dogs like him can, such as running, barking or playing fetch.

Said Walker, "He was barely able to stand, let alone walk. He was having a hard time breathing." The dog was also shy and skittish, which is to be expected of a dog in this circumstance. Would he be able to recover or was the damage done to this dog too much to overcome?

Both the shelter and the Sheriff's Office suspected immediately that Gabriel was the victim of animal abuse. He had no ticks or fleas on him, so he was likely being kept by a human owner, but not being fed.

Prepared for the Worst

The workers at the Humane Society are no strangers to heartbreak, so they were prepared for the worse. To their amazement, Gabriel's case didn't go the way they anticipated.

To everyone's surprise, Gabriel began gaining weight as soon as he arrived at the shelter. What's more, he gained it fast. This dog had the determination to get better and he proved that he was able to surpass the greatest expectations of his caretakers.

Piling on the Pounds

In just one short week at the shelter, Gabriel managed to put on nearly 20 pounds in weight. His recovery was a miracle, not just in terms of surviving, but because of how fast he was able to grow.

The dog's name, given to him by workers at the shelter, is a reflection of his miraculous recovery. They named him after Gabriel the Archangel, because this pup certainly had someone in a high place looking out for him!

Very quickly, Gabriel's personality began to shine through. He regained the use of his faculties and was soon running and jumping around, as strength returned to his body. If you look at this dog today, it's hard to believe he was ever the sick dog that first entered the shelter just a few weeks ago.

Gabriel's story went viral, gaining attention both on the local news and around the world thanks to the internet. Concerned wellwishers kept tabs on his story to see how his recovery was going. And this attention would prove to help not only Gabriel, but other dogs in his situation.

The Humane Society started providing a weekly update on Gabriel's progress on social media. Thousands of people were excited to see how the dog grew stronger, and how much progress he made.

In just a couple of weeks, Gabriel gained enough weight that it wasn't possible to tell that he'd ever been starving. Meanwhile, donations for the shelter started flooding in as people became concerned about helping Gabriel and the rest of the animals that were being looked after.

As with all dogs, Gabriel loves to play and chase his ball, as he is now able to do again. He's now given plenty of opportunity to play fetch, but is wrapped up warm as protection against the cold.

The Hope of Justice

Meanwhile, the Sheriff's Office was hardly staying idle. An arrest was eventually made in connection to Gabriel's case, under allegations of animal abuse. Thankfully, Gabriel is now in good hands.

Speaking of Gabriel, Walker said, "He’s a fighter, and, you know, he still has lots of life left in him and he’s not giving up." From the moment Gabriel entered the animal shelter, it was clear that he had an incredible fighting spirit in him. He proves his every day with his incredible determination to keep going!

Since his rescue, Gabriel has become something of a local celebrity, and he enjoys going on outings to meet new people and discover new places. His story means a lot to he people in his town and they show that to him by giving him plenty of treats and attention whenever he's around.

Even the local Girl Scouts can't get enough of Gabriel. He's a loving, caring pup who effortlessly makes friends with anyone he meets.

The Day is Saved

The world was very nearly denied Gabriel's charms. Thankfully, a few good Samaritans were able to save him, and he'll be living a long, happy life for plenty of time to come, with the help of this incredible charity, who aren't done helping dogs...

Dunn County Sheriff's Office is no stranger to dogs - they boast a very special canine companion, the eager (and very fluffy) Rookie who serves as their mascot.

The malnourished dog was taken to a local shelter. The Dunn County Humane Society prides itself on doing everything possible to help unloved pets find their "furever" home.

Forever Homes for All

The Humane Society mostly deals with stray or abandoned cats and dogs, aiming to give them a good home. Some of their fundraising efforts are absolutely adorable.

One fun event held by the Humane Society is its annual Dog Swim, in which pets are allowed to run rampant across an outdoor swimming pool. This certainly beats the mudbaths they'd get from disappearing into a lake or river.

It's not uncommon to see volunteers and representatives from the Humane Society fundraising or asking for donations across Dunn County. Their most requested donation item? Bleach. There are a lot of things to clean when you run an animal shelter.

Dunn County Humane Society is good at finding homes for many of its dogs, as they go on to live healthy, full lives. That said, some are healthier than others to begin with, but that doesn't stop them from unconditionally loving all animals that come their way.