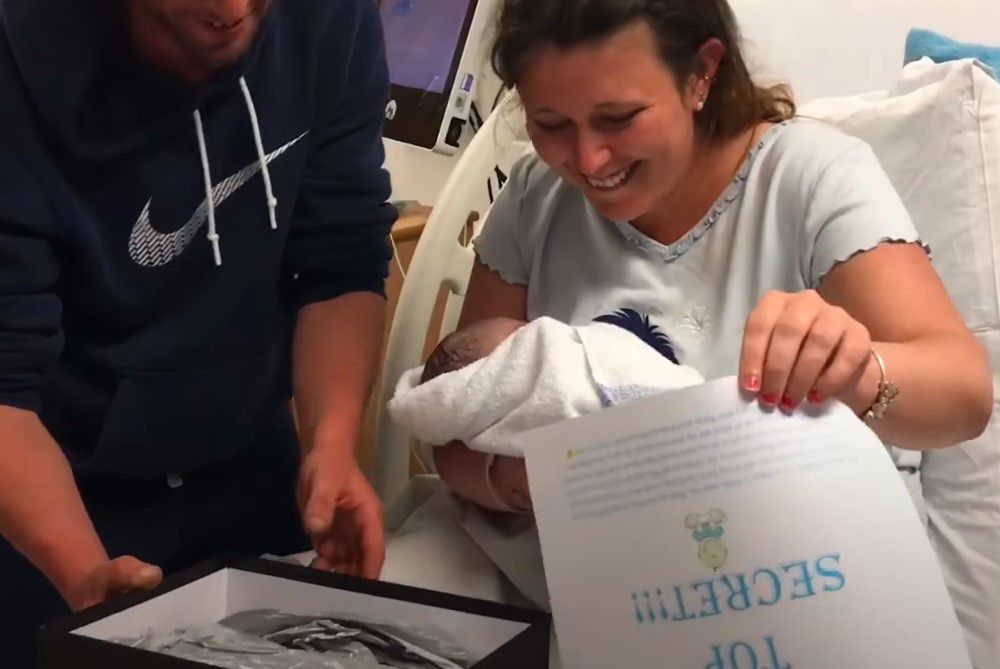 Sitting in the hospital bed amid the beeping machines, she cradled her newborn baby. Despite her exhaustion from giving birth, she was elated to hold her son finally.

She wasn't sure what to make of it when her husband approached and handed her a box she had never seen before. It held the secret her mother had kept hidden until her death.

Katrina held the pregnancy test in her shaking hands and unwrapped a second one just to be sure. The second one told her the same thing - she was pregnant.

She couldn’t contain her excitement as she told her husband, Danny. But just when the couple thought things were looking up, the bad news came.

Katrina’s mother, Joanne, hadn’t been well lately, so she made an appointment with her doctor.

Unfortunately, when the biopsy came back, it brought the news nobody wanted to hear: she had an aggressive form of lung cancer. It was terminal, and she only had a few months left. Katrina and her sister, Sarah, were devastated.

Katrina just couldn’t process the news. She couldn’t bear the thought that her beloved mother, who had been there for her entire life, would soon be gone forever.

And, even worse, her mother wouldn’t be there when her baby boy entered the world. She would never get to hold her grandson, and her grandson would never know her. She turned to her sister for support.

Sarah and Katrina had always had a special sisterly bond, so it was only natural that they turned to each other for comfort when they heard about their mom’s terrible diagnosis.

They resolved to put on brave faces and spend as much time as they possibly could at their mother’s side in those final weeks. Little did Katrina know, their mom was carrying a secret.

Katrina was, understandably, at odds with her feelings. She couldn’t reconcile the joy of being pregnant with the anguish of imminently losing her mom.

Although this was meant to be one of the happiest times in her life, she couldn’t feel it fully while her mother was slowly being taken away from her. When the day came, she felt numb.

Katrina and Sarah had watched the strong, brave woman they knew deteriorate into a shell of her former self, but they had tried to remain strong for her.

Finally, the day came when their mom gave up her battle with cancer. They said their tearful goodbyes and stayed by her side right to the end. But their mom had one final surprise up her sleeve.

Katrina was devastated that her mother wouldn’t be there to meet her grandson - they had lost her just six months before she was due to give birth. Nevertheless, life went on.

Katrina’s pregnancy progressed without a hitch. On Friday the 13th of that May, she gave birth to a beautiful baby boy, surrounded by her sister, husband, and other loved ones. But still, someone was painfully missing. But there was a surprise in store.

Katrina’s sister Sarah is a prominent YouTube vlogger. She and her husband had millions of subscribers to their channel, so naturally, Katrina’s birth was shared with the world, too.

But what nobody knew was that Sarah and her mom had made a special pact just before Joanne had passed away, and now was the time to reveal it.

Sarah had been holding onto her mom’s secret for six months. Just before Joanne had passed, she had given Sarah special instructions for the day of the baby’s birth.

Sarah took the box in her hands and gave it to Denny. She told him to take it to Katrina, who was still recovering in her hospital bed, waiting for her baby boy to be cleaned and weighed.

Katrina sat in the hospital bed holding her newborn baby. She was exhausted from the birth but so happy to finally have her son in her arms. Sarah kept the camera rolling for the bittersweet moment that followed.

Denny walked over to his wife and baby and handed Katrina a box she’d never seen before. Inside was the secret her mother had taken to her grave.

Katrina untied the black ribbon, opened the box, and immediately began to cry. A whiff of her mom’s favorite perfume and a gift. She carefully lifted out a baby onesie and read the embroidery on the back - the name ‘Harrison’.

Katrina could hardly breathe through the tears. Her beloved late mom had named her son from the grave.

You see, when Katrina and Sarah had found out about their mom’s terminal illness, they still desperately wanted her to be a part of her grandson’s birth.

So the sisters had come up with a heartbreakingly beautiful plan. Just before Joanne passed away, Sarah asked her to name Katrina’s baby so that she could be a part of his life - even if only in spirit.

"My name was handpicked by Nanna Joanne in heaven," the back of the onesie read.

The video of the heartfelt name reveal was uploaded to Sarah’s YouTube channel with the description: “Due to our mum being diagnosed with terminal lung cancer just a couple of months before my sister found out she was pregnant, my sister made an incredible decision.”

Sarah continued: "Wanting our mum to have an important part in [her grandchild's life], my sister decided my mum was to choose the name and was to tell it to me just before we had to say goodbye to her.”

"My sister and her partner wanted the name to be a surprise until the day their baby was born, so his name is a secret I have been keeping for the last 6 months." But that’s not all.

This is not the first time someone takes a secret to their grave, nor will it be the last one. It happens more often than you may think. Even those closest to you may keep things secret from you that you won’t know until they’re gone forever.

Anyone, and particularly those who were raised at a time when certain things were not tolerated, can keep deep secrets. That’s what happened in the next story:

"I've done some wicked things," she muttered on her deathbed. Those were some of the last few words she said to her family before passing away.

For years, they wouldn’t know what exactly she meant by that. Until one day, one fortuitous encounter changed everything. They could have never expected something like that from their granny.

Fern Britton, aged 65, is a well-known British television presenter, famous for having conducted the cookery game show Ready Steady Cook between 1994 and 2000 on the BBC.

Her grandma had an interesting background and story that she was more or less aware of. However, there was something about her he never suspected until one fateful day.

Britton was born in London, but a part of her family was born very far from the United Kingdom. One of such members was her grandmother, who “was christened with many names, but the one she chose to use was Beryl Hawkins.”

Britton defines Beryl as tough and independent, and states that she “would today be known as a proud feminist.”

Grandma Beryl was born in Mauritius; she was the daughter of a British soldier deployed to the island. Then, she moved to Penang, a British dependency on the Malay Peninsula.

That’s where she met her husband, Britton’s grandfather, who was a prosperous rubber plantation owner. Britton’s mother and uncles were born on the island. However, the family’s destiny would soon take a turn.

Before the outbreak of WWII, Beryl and her kids moved to London, where they would settle down; but Beryl’s husband stayed in Penang.

He later became involved with the local government and became a prisoner of war in the notorious Changi jail. But for the next few years, Beryl and the kids carried on with their lives in London, where Britton was born.

Britton remembers Beryl as “a wonderful parent and a fantastic grandmother - always making me fancy dress outfits and knitting jumpers for my dolls or teddies.”

“She would tell the most tremendous stories about her life and travels on banana boats, playing bridge to earn her passage,” she recalls. Little did she know, she concealed one secret that she would take to her grave.

“When we came back from trips via the boat train from Southampton, she would always smuggle something into the country,” Britton recounts.

“Queuing in the huge customs sheds, she'd feel faint or have a funny turn just as she reached the front of the queue. Everyone would rush around in concern, and they'd push us through without checking her bags.”

“Back on the train, she'd open her handbag and there inside would be a watch or two. She would have made a wonderful spy!” Britton says.

But that wasn’t all. There were some other details about Beryl that made her an enigmatic and intriguing person. Sometimes, she would do certain things that seemed unexplainable to everyone around her.

Lying About Her Age

“She pretended to be older than she was,” recalls Britton. “When she sent us to the local corner shop to buy her 20 Kensitas cigarettes, the lady behind the counter would always say: "Isn't she wonderful, your grandma, for an 82-year-old?"”

“In fact, she was only 67 when she died. But the eccentricities that delighted me as a child might have revealed there was guilt”. But Britton wouldn’t find out until years later.

“I’ve done some wicked things,” Beryl said to Britton’s mother during her last moments, before passing away at age 67. Those were some of the last few words she ever uttered. But what did she mean by that?

It would all be revealed by Britton’s random letter from a stranger, years later. Britton had published a novel inspired by her grandmother’s life. Someone read it and spotted some uncanny signs.

One day, Britton received an anonymous letter. It was a man who had seen her on TV and read her novel. He asked if her parents were Ruth and Tony Britton; she answered that those were indeed her parents’ names.

"This might be a shock," he wrote back. "But I think I'm your uncle - your grandmother was my mother."

“I wrote back asking for proof,” Britton says. “And he sent me a clearly treasured batch of letters and photographs, showing him as a small boy on the beach with, quite unmistakably, my grandma.”

“Before her marriage to my grandfather, my grandma had become pregnant. This must have been immediately after the First World War,” Britton reveals.

“All we know is that she had a little boy, and gave him to a family in some kind of private fostering arrangement. She never forgot him and wrote many letters sending money and asking after him.”

“She even went to visit him and had photographs taken with him as a toddler. Though when she married and went to Penang, it seems the letters stopped. She had to block him from her new life.”

She Left Him Stranded

“As her little boy grew up, he decided to try to find her - and he did. When she opened the door to him, she must have panicked. She called for my uncle to close the door on him and tell him never to come back.”

“My uncle never knew he had turned his own half-brother away. Despite this, my secret uncle grew up, married and raised a loving family. He never appeared bitter, though his mother's rejection, especially when he was older, must have been deeply painful.”

In order to protect the privacy of those depicted, some names, locations, and identifying characteristics have been changed and are products of the author’s imagination. Any resemblances to actual events or places or persons, living or dead, are entirely coincidental.