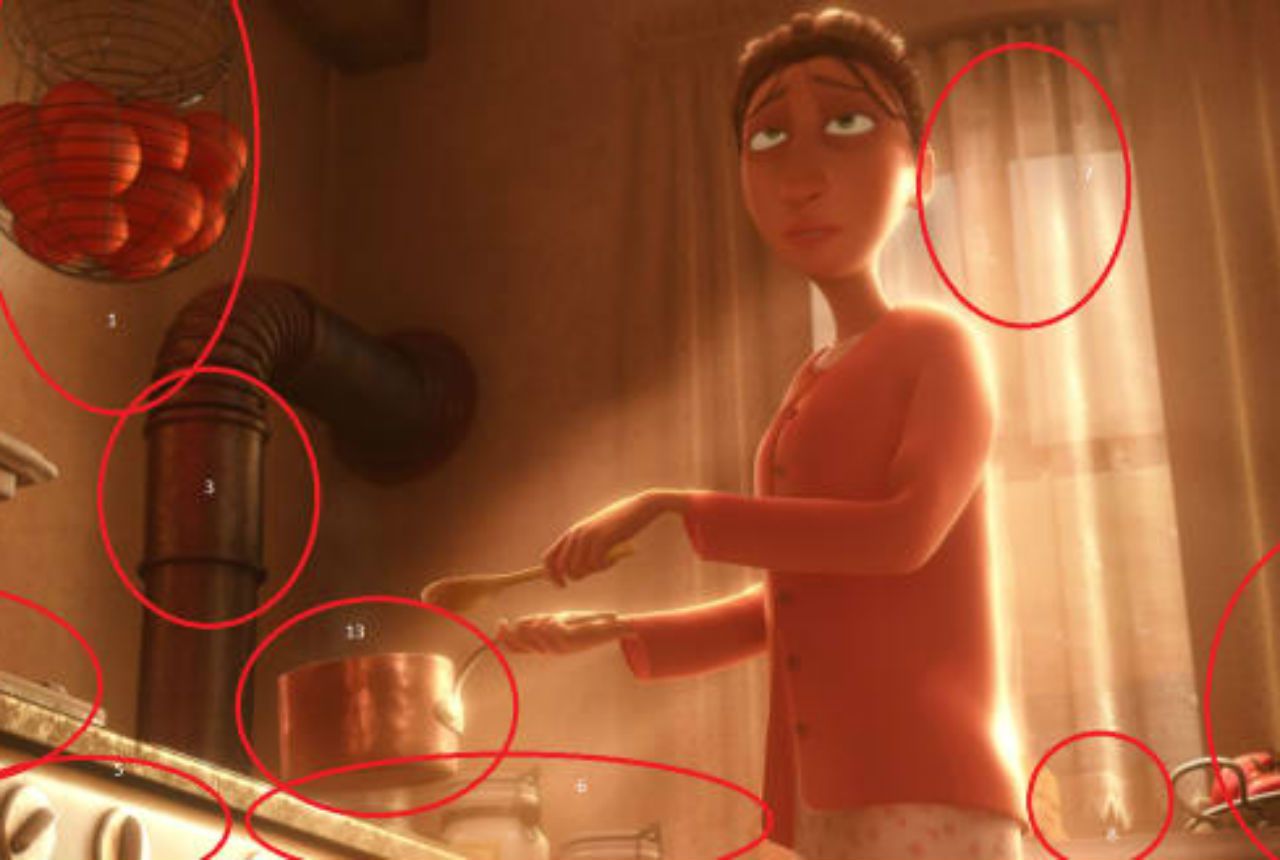 One of the best things about watching Pixar movies is trying to spot all of their subtle nods to other films and filmmakers. If you’re a fan, you already know some of the obvious ones. But this is about the Pixar easter eggs you probably haven’t noticed. So sorry, those Pizza Planet and A113 references in every movie aren’t going to make this list.

By now, we’ve become all too acquainted with Pixar’s shorts, those incredible mini films that precede every full-length feature. In a scene from 1995’s Toy Story, you can spot the titles of some of those shorts as books on a shelf behind Woody.

Come Play with Us (Toy Story)

Lee Unkrich, one of the editors on Toy Story (he would go on to direct the sequels, Finding Nemo and Coco), is a huge fan of The Shining. So it’s fitting that the film’s antagonist should live in a house that shares the same decor as a hell hotel.

Sid’s toolbox in Toy Story bears the Binford Tools logo. Unless you were a fan of the ‘90s TV show Home Improvement (it starred Tim Allen, who voices Buzz Lightyear), this one might have gone over your head.

Letters from Up (Toy Story)

Thought to be one of the greatest Pixar easter eggs out there, a postcard on Andy’s bulletin board is apparently addressed to (or from) Carl and Ellie, of Up. Thing is, the postcard actually only appears in a trailer for the film and not the film itself. Still, we have to believe there’s some familial relation between the two.

Blink and you’ll miss it… The batteries used to power Buzz Lightyear in Toy Story 3 bear the logo of Buy N Large, the company from WALL-E that’s pretty much responsible for Earth’s destruction.

The Casey Jr. Cookies box in A Bug’s life is a reference to one of Disney’s early animated features, Dumbo. Casey Junior is the train that transported the circus, while J. Grant is a nod to Joe Grant, an author and director at Disney.

When Mike and Sully throw Randall through the door to banish him into the human world, he winds up in a trailer in the middle of nowhere. Except it’s the same trailer seen in A Bug’s Life, when Flik goes to Bug City.

Monsters, Inc. features several easy to spot Finding Nemo references, including a beloved stuffed toy owned by Boo. So it’s only fitting that Finding Nemo should include a callback, in the form of the same fish mobile in the dentist’s office that Boo has in her room.

Doc Hudson’s Superhero Past (The Incredibles)

You have to look closely, but during the final battle scene in The Incredibles, you can spot a familiar blue car in the background. It’s Doc Hudson, the future mentor of Lightning McQueen in Pixar’s next film, Cars.

The two old men seen at the end of The Incredibles are actually based on real people. Frank Thomas and Ollie Johnston were two of Disney’s original animators and part of Walt Disney’s “Nine Old Men.”

With a Vengeance (The Incredibles)

There’s a scene from The Incredibles in which Frozone is held at gunpoint by a police officer. It’s a nod to one of Samuel L. Jackson’s previous films, Die Hard with a Vengeance, where a near identical scenario takes place.

Bomb Voyage is a French mime supervillain who’s featured in The Incredibles. But he also turns up in the background of a scene from Ratatouille, as a regular ol’ mime just trying to make a few kids laugh.

As Remy makes his way through the city, he’s startled by the shadow of a dog cast against a wall. But it isn’t any old dog… if you’re familiar with Up, Dug’s stocky build is pretty unmistakable.

WALL-E’s penchant for collecting old Earth junk seems to have a Toy Story theme. On one of his shelves, you can see an old Rex doll peeking out between a couple of bowling pins.

The bottle cap that’s pinned to Carl’s jacket in Up features a soda brand from the first Toy Story. It’s the same grape soda that can be seen in the Buzz Lightyear commercial that plays after Buzz is kidnapped.

The Legend of Sully (Brave)

The wood carving of Sully that can be seen in the Witch’s shack is not only a nod to the lovable Monsters, Inc. loaf; it’s also one of the first clues behind the famous Pixar Theory. Is the Witch actually a time traveling Boo? Probably, but we may never know for sure.

In a scene from Toy Story 3, Molly is reading Tween Magazine, the cover of which features the face of Finding Nemo’s Darla. Similarly, one of the magazines in the Finding Nemo dentist’s office has an image of Mr. Incredible on its cover, and Ratatouille’s Colette can be seen in Inside Out.

During the final event of the Scare Games in Monsters University, several kids’ toys are scattered on a mock bedroom floor. One of them looks like Arlo, a character in the film The Good Dinosaur.

Figment of the Imagination (Inside Out)

There’s a photo of a dragon on top of a bunch of miscellaneous stuff inside of Riley’s mind in Inside Out. The dragon is actually Figment, the Imagination mascot of Epcot, in Walt Disney World.

While we’re all familiar with the A113 references in every Pixar film, the PA 1200 nod in Finding Dory is a little harder to recognize. Unless, of course, you already knew that 1200 Park Avenue was the address for Pixar Studios.

The Marine Life Institute in Finding Dory is actually based on the Monterey Bay Aquarium. It’s just about two hours outside of San Francisco, the city that Riley’s family moves to in Inside Out. You can see her in the back of the crowd of kids in Finding Dory.

When Lightning McQueen heads to Sterling’s office at the Rust-Eze training center to talk about retirement, you can see a brief homage to Disney’s Cinderella on one of the shelves. It’s a gold version of the princess’ pumpkin carriage.

While it isn’t as difficult to spot as some of the other easter eggs here, the poster for The Incredibles 2 is a fun homage in Coco’s streets. Of course, it’s mostly because the entire family is undead.

The scene in Coco that takes place inside of the Bureau of Family Grievances office is most known for its A113 door reference. But check out that old Apple computer on the desk. It’s a nod to Pixar’s co-founder, Steve Jobs.

And the One Thing You Never Realized in Ratatouille (Ratatouille)

In Ratatouille, when Ego tastes Remy’s food, he falls in love with it. Remy’s is the one dish that can win him over. Turns out, there’s a reason… and Imgur user ManImgurUsernamesAreDifficultToThinkOf has a theory as to what it is.

When Ego takes a bite of Remy’s ratatouille, he flashes back to his childhood — and to his mother’s cooking. But it’s the cookware that you should be paying attention to… because it’s already appeared once before in the film.

In the film's first big scene, that same cookware can be seen in the old lady’s kitchen. But it isn’t just the pots and pans… Other items from the old lady’s house are the same as items seen in Ego’s childhood flashback.

Which means that the old lady and Ego’s mom are the same person. And the ratatouille that Remy learned to make is actually the same ratatouille recipe from Ego’s childhood, which is why he fell in love with the dish.