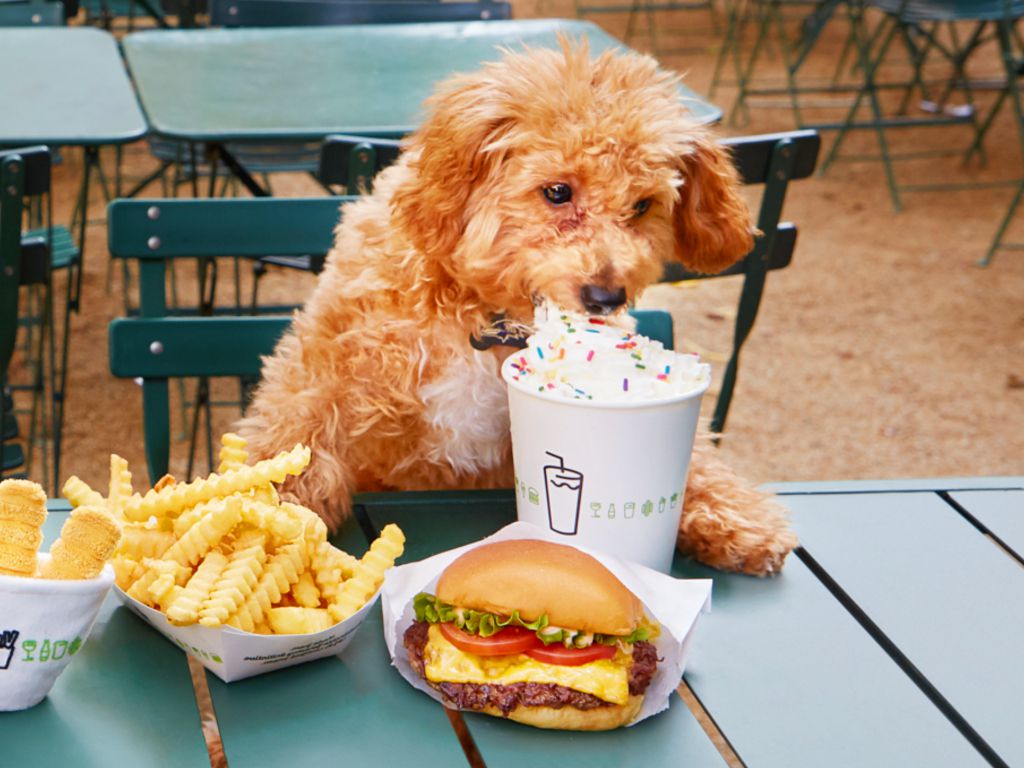 Restaurants are far safer for your furry friends than you might believe! Even if you can't bring your pup with you inside, restaurants are working hard to make themselves pet-friendly in other ways to get around that Health Department curve. We love a good outdoor patio and we also enjoy these secret and not-so-secret menu-items for our pups.

One of the more popular "secret" puppy menu-items is the Puppuccino at Starbucks. No, it isn't coffee for your pup (which you should never do). A Puppuccino is a little whipped cream in a small cup that you may or may not be able to add your pup's name to, just for fun. It is a secret, so you do have to ask for it by name.

Sure, there are some burger joints that'll sell you a patty a la carte, but In-N-Out specially makes Pup Patties. When you order a Pup Patty, you're ordering an unseasoned patty served in a doggy bag. But it's just for Fido and you don't have to worry about any of those toppings. It is a secret menu-item, though, so you will have to ask for it by name.

Everyone loves cupcakes— including dogs. In order to keep our furry friends in the loop, Sprinkles Cupcakes offers Pupcakes. These little numbers are made with premium ingredients like egg-whites, sugar substitute, and a yogurt "frosting" specifically for your pup and they're right on the menu in plain sight.

Dairy Queen is one of the most notable pup-friendly menu items on our list— the Pup Cup. That's because it's usually free. Yes, FREE. It might be limited to only one-scoop of ice-cream in a small cup, but that's one-scoop you don't have to pay for. But this doggy-menu item isn't on the real menu. You'll need to remember the name Pup Cup and ask for it.

If you're stopping at Shake Shack and have your pup with you, don't forget to order a Pooch-ini. The Pooch-ini is made up of a cup of vanilla custard and one or two very large dog biscuits. Traditionally sized for larger dogs, it's still safe to let your smaller dog have a lick or two. This Shake Shack item is listed on the menu right above their other pup-friendly item, "bag o' bones."

Sonic has been known to bring out a doggy treat or two with your food if they know you have your pup with you. A pup cup with ice cream is also a possibility. It's an incredibly pet-friendly restaurant, which makes sense since it's a drive-thru establishment. But you've got to tell your server when you order that you have a dog with you.

Joe's on Juniper is a swanky dive-in located in Atlanta, Georgia. Servers usually bring a water bowl to the table for your pup. And even though there isn't an official dog-menu, you can ask for a plate of scrambled eggs for your pup. Usually, the wait-staff will be accommodating, but that all depends on who your server is. You just have to ask.

Posana is a dine-in restaurant located in Asheville, North Carolina, which is known as a "dog-town." The restaurant has always allowed dogs on the patio, but only recently created a farm-to-table menu for your furry companions consisting of grilled chicken breast with grains, Brasstown Doggie Beefloaf, and bacon soy ice-cream treats. And by farm-to-table, we mean a three-course meal. Yes, please.

Lazy Dog offers a bowl of brown rice with the options of chicken or grilled hamburger patty. For now, you have to ask for this dog-friendly platter by name, but your server will be happy to put the order in. Lazy Dog has an official dog-menu on the way, so keep an eye out for that!

Tim Hortons is mostly popular in Canada and the chain resembles a set-up similar to America's Dunkin' Donuts. They've created the Doggy Timbit, which are like regular Timbits, but made plain and without sugar to make them dog-friendly. The only thing you have to do to get your pup a sweet set up of Doggy Timbits is ask them to make an order of Timbits dog-friendly.

At Art & Soul in Washington, D.C, there's an entire Pooch Patio menu dedicated to our furry friends. A couple of the items from the Pooch Patio menu include the Bowser Beer, a nonalcoholic brew, and the Gravy Train, which is beef and rice in a savory gravy. Sounds like a wholesome meal for a well-deserving pup.

The Tin Shed Garden Cafe is a dine-in restaurant located in Portland, Oregon. They offer two doggy menu-items, Fido Food and Doggie Dessert. The Fido Food includes sweet potatoes and chicken and the Doggie Dessert includes their house-made peanut butter and banana ice-cream. The Tin Shed also has a special on Tuesdays that states that with the purchase of one "human" food item, you get one "doggie" food item for free. Bring it on, deals!

Every Monday of the month, Banger's Sausage House and Beer Garden hosts an event called Mega-Mutt Mondays. They place a special sausage on the menu for pups and let the dog park inside of their beer garden run wild with doggies. And yes, it's located in one of the more pet-friendly places— Austin, Texas.

P. Terry's is a primarily drive-thru establishment. They more often than not have dog treats at the ready to offer if you roll-up to the drive-thru window with your dog in the car. If they don't offer or if you don't have your pup with you, then it doesn't hurt to ask for one. We highly doubt they'll say no— unless they run out, of course!

There's an off-menu item consisting of a plain hamburger patty called the Dog Burger at select Johnny Rocket locations. Even though some locations offer it, you'll still have to ask for it. Because Johnny Rocket's doesn't have an official dog-menu, there's no sure way of knowing which locations offer a pup-friendly dish unless you ask.

Known for their dog-friendly drive-thru and patio seating area, you might just get a milk-bone thrown in vanilla custard if the employees at Culver's know there's a dog in the car. But just in case they don't know, all you have to do is ask for a pup custard and voila, both you and your furry-companion get to nibble on something sweet.

At Besa Grill in Clearwater, Florida, there's a Doggie Dining menu available so your pup can eat while you do. K-9 Meatballs include rice, beef, and carrots minced into a ball and served with gravy. And don't let anything keep you from getting dessert. There's a Cookie Plate available for pups, too.

Rock & Brews has a doggy-specific menu, the "Dog Side of the Menu." Addie's Feast is made up of roasted chicken, sweet potatoes and brown rice. But there are plenty of other items on the dog-menu, like Burger Patties, that are sure to fill your pup right up.

Dog Park Cafe is a dine-in restaurant located in Temecula, California that's known to favor their four-legged customers. Everything on the menu caters to your dog. Like the Doggie California Roll made up of cod, rice, cheddar, and seaweed— all rolled up and ready to go. You might have to find somewhere else to eat, though, if doggy-inspired menu items aren't up your ally.

Watering Bowl is a dine-in restaurant located in Denver, Colorado that offers a couple of items specifically for their four-legged customers. During your visit, you can try their Doggie Cakes that cost roughly $18. This pet-friendly Colorado gem is known for their weekday Yappy Hours, where pup-owners get some great deals and pups get to roam around unleashed and socialize.

Similar to a Starbucks' Puppuccino, this menu-item isn't technically on the menu. But if you happen to drive-thru Dunkin' Donuts with your pup in the car, you can order a Puppy Latte. It's a whole lot of whipped cream in a cup. They'll love it.

Located in Leesburg, Virginia, Fire Works Pizza hosts an event from May to August called "Pups on the Patio", where a special menu is made for just for pups. Pup-owners can also snap photographs of their furry-friends enjoying themselves and enter it into a contest for a chance to win prizes. Any other time, the restaurant remains pet-friendly, just without the special menu.

This one is a bit confusing and circumstantial. This yummy whopper flavored dog bone isn't actually sold in any Burger King restaurants. No, the Dogpper can only be secured when you place an order for Burger King through DoorDash. Free with purchase, but limited to one per purchase.

Some Rita's Italian Ice locations offer furry companions either a cup of vanilla ice with a treat on top or a cup of vanilla custard. Not all locations do it and there isn't an official menu. But if you have your pup with you when you stop by, and want to double-check, feel free to ask if they offer it.