Hundreds Gather To Hug This Puppy With A Broken Heart 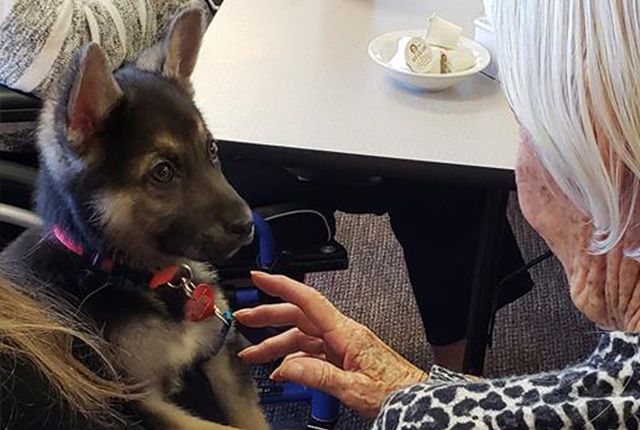 Logan was unlike other dogs. And we’re not just saying that because he’s super cute. Because you can’t tell by looking at him, but, medically speaking, he’s in serious trouble. So when he arrived at a rescue in Washington, workers were certain the sick puppy was in need of hugs. But he also desperately needs more help...

Logan is a German shepherd, and he’s adorable. You only have to look at him once for him to enchant you with his cuteness. So how this pooch doesn’t have a forever home is beyond us. But, fortunately, he’s not on the streets...

Logan Was Taken In By A Rescue, But It Wasn’t Exactly The Right Fit

The rescue in Washington where Logan lived adored him. Like most rescues, Logan received a couple of routine checkups. And that’s when a horrible truth was revealed...

The Rescue Realized Something Was Wrong With The Pup

Logan had stolen everyone’s hearts, but it was his own heart that was a big issue. The folks at the rescue learned that Logan had a serious heart defect, but they didn’t know what to do about it.

Why Had Destiny Cursed This Cute Dog With A Bad Heart?

If there’s one creature on this planet that didn’t deserve this heart condition, it was Logan. He was young, innocent and cute as can be. This sick puppy needed hugs to cope with his prognosis, and that’s not all.

Logan Needed Someone Who Knew How To Handle His Condition

Unfortunately, the rescue that found him couldn’t help. But they knew who could. So they sent him to Rescued Hearts Northwest in Ferndale, Washington. They were like a beacon of hope.

They took Logan to the vet for some extra tests. Sadly, the tests only confirmed the initial diagnosis. The pup was in distress, and his time was growing short with each passing day.

Logan’s Foster Mom Was Brought To Tears By The News

Lindie Saenz, Logan’s foster caregiver, was told that Logan had only a month to a year to live. The echocardiogram showed he had two faulty valves, and the hopes of fixing them were slim.

But Logan’s New Friends Weren’t Ready To Give Up

Logan’s days were numbered, but everyone stayed positive and helped him settle into his foster home with Saenz. They couldn’t believe how playful and spunky the pup was. Then the family came up with a great idea...

They Didn’t Want To Waste Another Minute Crying

The Saenz family wanted to show Logan the world before he died. There was so little time and so much to do, like going to the beach, swimming, playing in the snow, and eating cheeseburgers and ice cream.

No matter where the family took Logan, people fell in love with him instantly. He was such a sociable little pooch. The love from strangers gave the Saenz kids a light-bulb moment. They knew what Logan needed most...

This sick puppy needed hugs. Lots of them. And his foster family intended to get him at least 100. So, with the help of the rescue, Logan’s family and friends created an event named Hugs for Logan and spread the word throughout the community.

Their 100 Hugs Goal Was Pretty Reasonable, But They Were Shock By The Results

The family was overjoyed when they discovered that more than 200 people showed up to the event with their arms wide open and their hearts ready to give some much-needed love to Logan.

People Came From Far And Wide To Meet Logan

One couple had driven all the way from Oregon just to give Logan the TLC his little heart needed. Everyone in Logan’s life was overjoyed and grateful for all the people that were eager to give Logan a hug. But they had to make sure he was OK too.

They Didn’t Want To Overwhelm Him Either

Logan’s foster family gave him tons of breaks so he wasn’t overwhelmed by the experience. Thankfully, everyone understood, and they waited patiently for their turn to share a one-on-one with Logan. And the pooch seemed to love it.

There Were Plenty Of Laughs, And A Few Tears

Logan loved meeting his many admirers, but his new friends were both happy to see him and sad at the same time. They knew his condition was critical, and they wanted to make him as happy and comfortable as they could. But all hope was not lost...

The Event Drew A Glimmer Of Hope

The event inspired the Saenz family to add more to Logan’s bucket list. But then a doctor reached out to them with a claim that was too good to be true, and they were elated...

The Doctor Was Confident He Could Do It

Dr. Brian Scansen of Colorado State University (CSU) Veterinary Teaching Hospital sent Rescued Hearts Northwest an optimistic email claiming he could fix Logan’s heart if they could get the pup to Colorado.

So The Rescue Began To Raise Money

They raised enough money to fly Logan to Colorado for the surgery. On Jan. 31, 2019, Logan went under the knife. Everyone at CSU was keeping their fingers crossed they could save Logan, but things didn’t go the way they planned...

The medical team tried for four hours, but they couldn't get the catheter/balloon in to fix a defective valve. This surgery was only going to buy Logan the time he needed to have his open-heart surgery anyway. But to do that, the pup had to wait a few months.

For now, Logan's family, friends and supporters are doing everything they can to keep him alive. But that hasn’t stopped the Saenz family from taking Logan on tons of adventures across the country. And there’s still hope.

To date, fundraising for Logan has hit around $45,000 of its $60,000 target thanks to the puppy's many kind and loving supporters. Meanwhile, the pooch is doing well and attending puppy kindergarten. He goes once a week and is considered a star pupil.

He Also Enjoys The Simpler Things In Life

Logan loves playing in the snow. He’s already figured out how much fun it is to go up and down the stairs. But his favorite pastime involves finding sticks. And that’s not the only new development in Logan’s life...

The Pooch Now Has Two Foster Families Who Adore Him

According to Logan's GoFundMe page, Lindie Saenz is fostering Logan with her family. So, essentially, this lucky dog is loved and taken care of by many. No wonder he seems to be in good spirits. But he’s still lacking something...

Logan Needs To Gain Weight For The Surgery

So far, he’s gained a little less than 2 pounds since he returned from Colorado. He currently weighs 22.11 pounds and is eating large-breed puppy food. He also gets tons of treats. But it’s still not enough...

Logan Has Less Than 2 Months To Get His Weight Up

Logan needs to weigh anywhere from 40 to 50 pounds. For now, the best thing the rest of us can do is continue sending Logan positive vibes (and donations, if possible) so he’ll grow strong enough in time for the surgery. Hang in there, Logan. We’re rooting for you.