Camila Villafane
A Dog’s Favorite Stuffed Toy Got Rescued and Repaired and It Was Adorable February 12, 2019 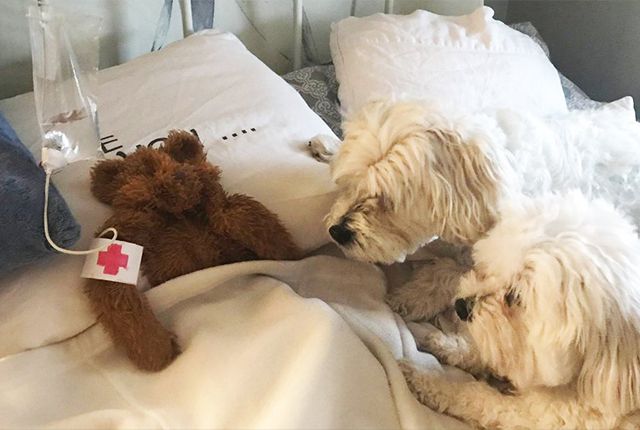 Most dogs love shaking, chewing and loving stuffed toys. And sometimes they’ll carry them around as if it were their own flesh and blood. But when one dog’s stuffed dog toy suffered a serious booboo? Well, that's when his owner sprang into action to save its life.

Something Was Horribly Wrong

Something had happened in Michaella’s household that had changed everyone's lives. No one noticed it at first. But there was something seriously off with their family. They just couldn’t quite put their finger on it yet.

Someone Was Missing In Action

[dx_custom_adunit desktop_id="RTK_K67O" mobile_id="RTK_5yk0"] Everyone in the family was accounted, or so they thought. But one very special person was missing. This individual was a friend to everyone. But he had a special connection with one family member in particular.

Lucky, the dog had a very best (stuffed) friend and they were virtually inseparable. But when his favorite soft toy vanished without a trace, Lucky felt like the unluckiest dog in the world. But where did the dog’s stuffed toy go?

They Were Friends For Life

The friendship between Lucky and his toy bear had blossomed over a number of years, so discovering what happened to his BFF was quite a blow to the household’s beloved pooch once it reappeared.

It Was His Playmate

[dx_custom_adunit desktop_id="RTK_K67O" mobile_id="RTK_5yk0"] Lucky used to take the bear out to play all the time. He also protected it like it was his baby. But even dogs can have an off-day. So, when Lucky went outside for a bathroom break, he accidentally left the bear outside. And something bad was approaching, too.

There was a winter storm heading in their direction, and Lucky hadn’t realized he had left his best friend outside. The stuffed animal was undoubtedly buried under the snow. But would they find it in time?

It Was Real To Him

It didn’t matter if the soft toy wasn’t really alive. It was real to Lucky. So, the next day, her dad, Terry Wallace, (Michaella's dad) went looking for the missing bear, and he found it. But it certainly wasn’t the happy ending anyone expected.

He Had Some Bad News

[dx_custom_adunit desktop_id="RTK_K67O" mobile_id="RTK_5yk0"] Wallace brought the soft toy back into the house, but it was in really bad shape. The first thing he had to do was break the news to his daughter, Michaella, who moved away to attend college. But it was a sad day for everyone when he shared the pics in the family group chat.

He Broke It To Her Gently

Using the family’s group chat, Wallace informed his family that he had found one of Lucky’s babies outside. But he had some horrible news. The soft toy might have passed away from the elements.

Wallace Worried For His Dog

This had been Lucky’s very best friend. The two of them were like hand and glove. He was afraid that losing the bear would freak the pooch out. But when Wallace found the bear, he was both elated and worried by the condition it was in.

[dx_custom_adunit desktop_id="RTK_K67O" mobile_id="RTK_5yk0"] Leaving a stuffed bear outside is like leaving someone stranded in the middle of a desert. The poor soft toy had been exposed to the elements for far too long. But thankfully, all hope was not lost.

There Was A Glimmer Of Hope

Once Michaella’s mom brought the bear inside, the dad started performing CPR on the stuffed bear. It was touch and go at first, but he managed to find a weak pulse. He also kept his family in the loop so they could send the bear some positive vibes.

Wallace managed to ‘revive’ the bear, but it wasn’t out of the woods yet (no pun intended). The bear needed time to recover. So, Wallace set up a makeshift medical room and hooked it up to a fake IV drip, and the whole thing was beyond adorable. Isn't this the best dad in the whole wide world or what?

On Pins And Needles

[dx_custom_adunit desktop_id="RTK_K67O" mobile_id="RTK_5yk0"] Usually, Wallace would have put his foot down and enforced the “no visitors” policy. But he knew how much the bear meant to his dog, Lucky, so he allowed him and their other dog to check up on their friend. But Michaella wasn’t sad. It was quite the opposite.

Most people would have been worried, but Michaella knew that the stuffed bear was in good hands. She simply loved how her father took the toy’s predicament to such adorable extremes, and she wasn’t the only one.

Michaella decided to post the screenshots her dad sent her, as well as the teddy’s recovery process on Twitter. Everyone thought it was so adorbs that they kept liking and sharing the story until it went viral.

The Internet Fell In Love

[dx_custom_adunit desktop_id="RTK_K67O" mobile_id="RTK_5yk0"] People were falling in love with the story, despite the fact that the dog’s stuffed toy had a near tragedy that almost severed their friendship forever. But we’re sure Lucky learned his lesson and will think twice before leaving his bear outside when he goes on a bathroom break.

Everyone Grab Some Tissues

Twitter users couldn’t believe the lengths Wallace had gone through to aid in the bear’s recovery. But this pawsome dad had stolen their hearts as well. His heroic efforts to keep the bear alive may have brought people to tears, too.

Comments started flooding Michaella’s Twitter post fast. They simply couldn’t believe the anyone’s dad could be this cool and adorable. If anyone deserved the best dad of the year award, it would be this guy. The man went above and beyond for his pooch's favorite stuffed toy, so in our book, Michaella's dad is a total hero.

It Was A Real Tear Jerker, Too

[dx_custom_adunit desktop_id="RTK_K67O" mobile_id="RTK_5yk0"] The shared story brought a little sunshine into everyone’s lives and maybe even a few smiles. After all, Michaella’s dad had the cutest idea ever. But some people, like  @ksheldon, were bawling their eyes out.

People Wanted Wallace To Adopt Them

Some netizens loved Wallace so much for doing this that they were practically jumping at the prospect of having Michaella’s dad adopt them like @hibbary did. Not that you could blame them. We can totally relate.

While the Twitter community recovers from melted hearts syndrome, Michaella will likely be able to concentrate on her college courses now that she knows all is right with the world again. Meanwhile, Lucky the dog is enjoying life next to his adorable stuffed BFF.