Texas Man Builds Home of His Dreams With Nothing But an Old School Bus and $2,200

Camila Villafane
Texas Man Builds Home of His Dreams With Nothing But an Old School Bus and $2,200 October 5, 2018 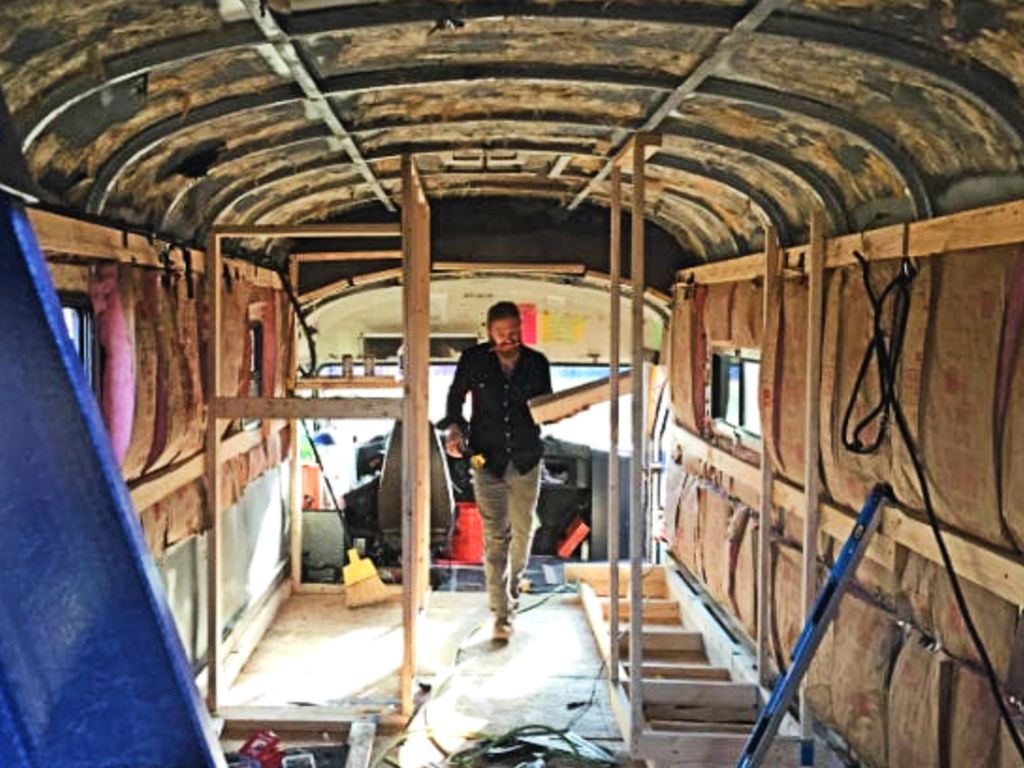 He started modifying the school bus in September 2015. He managed to brave the heat and the cold in Texas. But a year later, he was done. However, the financial drain was higher than the cost of the bus.

Talley decided to get rid of the original yellow color of the bus by painting over it with white Rust-Oleum. But it wasn’t just for looks that he chose this color.

Everyone has their own idea of what a dream home should look like. There’s no right or wrong either. It can be as lavish and outlandish as a celebrity home, or a tiny little cabin in the woods. But most people wouldn’t have envisioned living in a home with wheels. But that’s exactly what happened when a man built his dream home out of a school bus.

He Never Built Anything In His Life

Michael Talley had painted a couple of houses when he went on mission trips in the past. He even helped install a few plastic lattices. But that was it. “I have never built anything,” he confessed on Imgur. So how was he going to pull this off? It's not like he was playing around with paper and glue. He actually wanted to build a house!

He Had Two Dreams

There were two things that Talley wanted to achieve. He wanted to travel around the world, but he always envisioned himself building a tiny house. However, he had a background in graphic design and illustration. How would these skills help him build his dream home?

Living In The Country

In order to make his dreams come true, Talley had to make a radical change in his life. “I sold all my possessions and moved out of my apartment and out to the country to build my dream tiny house,” he wrote on his GoFundMe page.

No matter what Talley did, life kept throwing him tons of obstacles. First, his girlfriend cheated on him. Then he lost his dog and one of his grandparents too. The only thing that kept him sane was his dream.

Building a dream home isn’t exactly cheap, but life got even more complicated when he was fired for reporting a crime to a cop. It sounds insane, but he had no way of fighting it because of the place he lived in. “I have no recourse in the State of Texas.”

His Days Were Numbered

Talley’s days of paying $1,200 a month for a tiny apartment in North Austin, Texas eventually came to an end. He had found his new home, and the best of part of it was, that it even came with wheels.

He decided to park his new home in South Austin where there was plenty of shade. Best of all, he only had to pay $100 a month in rent. Now that seemed like a bargain, but what exactly was he living in?

It Was A Fixer Upper

Talley’s new home was a fixer upper. Fortunately, he had some really helpful friends like Mariah and Justin, who drove from Missouri to help him out for a whole week. But he knew that he was going to need financial help too.

He set up a GoFundMe account with a goal of $5,000. The money would allow him to buy most of the much-needed materials to build the interior of his new home. But sadly, he only reached $310. How would he end up making his dreams come true?

He Needed A Better Plan

It became clear that to make his dream home a reality, he would have to come up with a better plan and rely on more friends to help him out. But his new home was not an easy thing to operate.

It Was A Burden

A home with wheels sounded amazing in theory, but the reality was a nightmare. “It's bulky, expensive to operate, and expensive to service. But this is my school bus,” he wrote on Imgur.

It Was A Burden

“I purchased the bus from the Austin Independent School District for a cool $2,200 off PublicSurplus.com,” he wrote on Imgur. He actually won the bidding war with another guy who also wanted the bus. But was it worth the trouble?

He Called It A Day

"Ultimately I decided upon a school bus because I thought, 'Hey, there's already for walls and a roof. Throw some wood and some light bulbs in there and call it a day,'" he wrote on Imgur. Needless to say, it wasn't as easy as it sounds. He spent a year coming up with a tiny home design for the interior of his bus. But the project would end up taking a lot of time.

Talley armed himself with the knowledge he found on YouTube. It turns out other people had turned school buses into homes too. So, he decided to start working on his very own tiny home project. It may have been a super tiny home, but it was more than enough for him.

His home might have been 202 square feet, but he was totally okay with that. The new kitchen he built was bigger than the one he had in his old apartment. Overall, he managed to achieve the impossible in a short amount of time.

He started modifying the school bus in September 2015. He managed to brave the heat and the cold in Texas. But a year later, he was done. However, the financial drain was higher than the cost of the bus.

Talley decided to get rid of the original yellow color of the bus by painting over it with white Rust-Oleum. But it wasn’t just for looks that he chose this color.

Colors Down The Road

“White is best for the heat here in Texas, and leaves me open to add colors down the road,” he wrote on Imgur. Meanwhile, his wooden interior didn’t get a paint job, because he couldn’t decide on a color. But the overall look was incredible!

“The tiny home has been gussied up with dark hardwood floors, butcher block, and white subway tile with black grout in the kitchen.” But Talley was conflicted about what to do with his bedroom.

A twin bed was good for space. But although this man built his dream home out of a school bus, he was still single. So, he decided to put the bedroom in the back of the bus, so he could have room for a bigger bed. He also raised the roof. There were still a few more details to work on, but his dream home was almost done.

Before Talley started raising the roof on the bus, a friend offered to let him park in his farm in Manor, TX. He didn’t charge him either. Aside from raising the roof, he spent his spare time sitting on top of it, drinking wine and watching the sun set.

Talley sealed the cracks between the welds with Bondo so that the elements couldn’t get inside. It was a good thing too, especially in winter where it could get down to 35 degrees Fahrenheit.

After finishing up all of the framing, he moved on to the wiring and the plumbing. In the end, “the bus is SO much roomier than I thought it would be!” He never realized it was going to be this much work, but it paid off.

If He Can Do It, So Can You

Talley admits that this was one of the most difficult things he had ever done. Mother Nature didn’t help. During construction, he had to endure hail storms and 2 floods. But he says, “If I can do it, you can too.” Now is that inspiring or what?