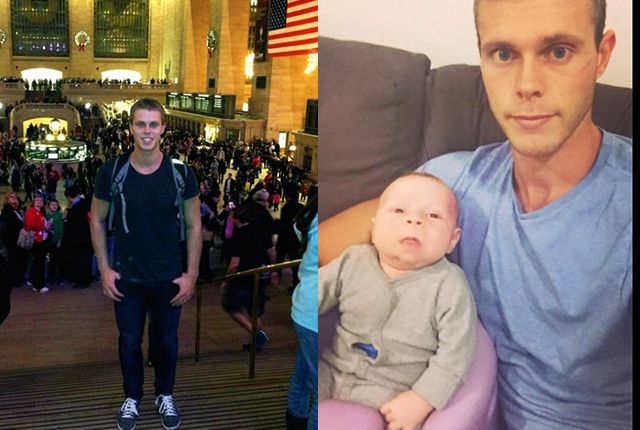 Tommy Connolly had everything. A solid part-time job, friends and a great family. He was even a student at the University of the Sunshine Coast in Queensland, Australia. As far as anyone was concerned, there was nothing out of the ordinary about his life. But then, when he least expected it, Tommy got a phone call that completely upended his life. Because it presented a challenge with which even an older, more experienced man would struggle. But Tommy stepped up to the plate and took it on. And that's just the beginning of how 23-year-old Tommy Connolly became the world’s youngest grandfather...

After college, Tommy Connolly got into the realty business. He did this by setting up a company with his business partner and Un-Realty co-founder, Reece Purcell. But it wasn’t easy.

There have been obstacles along the way, and a lot of people, like his former boss, told him he couldn’t go into this line of work all alone. But he was determined to become the best realtor in town. Not too long ago, he had bigger problems to worry about, though.

Tommy joined the track and field team at the University of the Sunshine Coast in Queensland, Australia. His prowess as an athlete was impressive. So, he decided to think outside the box and participate in non-college related sports competitions. But things didn’t go as planned.

He wanted to race in the national and international championship competitions. That would have been his ultimate goal, but then, life threw him a hurtle that even he couldn’t jump over and things got...well, pretty interesting to put it mildly.

The Next Great Adventure

Australia offers tons of challenges for outdoor enthusiasts. And Tommy took advantage of them all. He hiked, climbed, and even went water rafting. But sports weren’t the only thing that he was looking forward to.

Tommy loved sports, but it wasn’t his only passion. He wanted to start his own business, which is why he majored in business and economics. But that didn’t mean he was willing to give up on sports either.

Best Of Both Worlds

He hoped that he wouldn’t have to sacrifice his love for sports. In fact, he intended to have the best of both worlds by juggling his business with sports. But he also wanted to do a little traveling too.

Tommy had spent some time exploring remote areas in Australia, but he traveled abroad as well. In fact, he got an opportunity to travel to the United States too. But he also wanted to help the less fortunate while remaining in his native country.

He Was A Do-Gooder

Tommy had a big heart. He had cycled from Brisbane to Sydney to raise some money for underprivileged kids living in Ecuador. But there was so much more that he wanted to do with his life, until a long-lost relative came into his life.

He Had A New Responsibility

He had a lot of ambition and an urge to travel, which he wanted to do before he got older, and had more responsibilities. But he never foresaw being a father, let alone the world’s youngest grandfather.

Leave No One Behind

Tommy has always lived by a simple philosophy. “When bad things happen, it's your family that supports you. It means no one gets left behind or forgotten.” So, he decided to help a teen who had lost her way, and what he did for her should seriously grant him a medal.

He hadn’t seen his cousin Kiarna since they were both little kids. But when she walked back into his life, she was a grown 17 year old teen. The two of them used to be very close. But time had passed, and Kiarna had been living in Southport, if you can call it living.

Out Of The Blue

Neither of them had spoken to each other in more than 10 years. Then, out of nowhere, she messaged him on Facebook, and she had news that left Tommy utterly speechless.

She Was A Wayward Child

Kiarna’s parents couldn’t look after her, so she wound up homeless. Then, she did what she had to do in order to get by, even if that meant taking things without paying for them. She also turned to controlled substances because she was in so much pain.

Kiarna dropped out of school after sixth grade and was on the streets after that. But she got clean by the time she was 15. Then she got pregnant at 16, and the bad news was that her baby’s daddy was behind bars.

When Tommy reunited with his cousin, she was already 32 weeks pregnant. But that didn’t scare him off. In fact, he took her in immediately and offered to become her guardian. And it was a good thing he was on school break, because he had his work cut out for him.

He Had Just Enough

Since Tommy was on a holiday break from the university, he had been working full time at a fruit and vegetable wholesaler. So, he saved up to $2,800, which was just enough to move into a new home and buy some baby items the new baby desperately needed.

A Lifetime Of Instability

Kiarna had a traumatic upbringing brought on by a “lifetime of instability and bad history”. Tommy was concerned that authorities would take the baby away from his cousin after it was born. So, he stepped in.

He spent the months that followed working extra shifts, adjusting his financial budget, buying furniture and clothes for the baby, and of course, taking Kiarna to all of her doctor’s appointments. It seemed like things were starting to look up for Kiarna.

The Gift Of A Better Life

Mr. Connolly took her cousin in as if she were his own daughter in order to keep the family together, and to make sure that Kiarna didn’t end up back on the streets. In the end, he turned her life upside down. Then, came the main event!

On March 17, 2015, Tommy was in the hospital’s waiting room while working on his university assignments, which were due the following day. Then Kiarna gave birth to a beautiful baby boy named Kaydan, and the happy family became three.

When news broke out about what Tommy did, the story went viral. But he never meant for the world to learn about it. “When I tried to "update some of my mates" about my cousin, Kiarna... I accidentally updated the world. Why did the post go viral?” he wondered.

He was quickly dubbed the world’s youngest grandfather, but from Tommy’s modest perspective, he did nothing special. “If you picked a few people and did something randomly nice for them (big or small) and asked them to pay it forward to a few other people, the butterfly effect could explode.”

Kitty, License, And Braces, Oh my!

Aside from giving her a safe place to stay, Tommy also got Kiarna a kitten, bought her clothes, and taught her how to read. On his Facebook page, he added, “She's just passed her learners driver's license test and I'm teaching her to drive a manual, and also booked her in to get braces for her teeth next month.”

A Long Way To Go

Kiarna went through a lot as a young girl, but Tommy knows she’s tough. “There's still a long way to go, but things are on track and she has the opportunity she deserves.”