The Creepiest Urban Legends You’ve Never Heard of (Until Now) 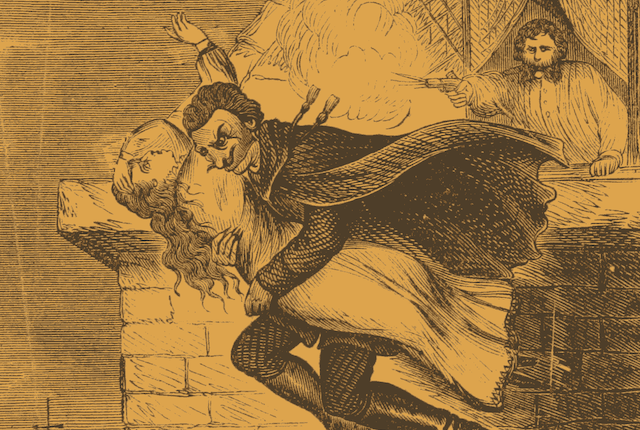 You’re familiar with Bloody Mary, the Hookman, and the Killer in the Backseat. For centuries, urban legends have been an enormous part of our storytelling history. Because they stir something primal in people. They evoke our greatest fears. And our paranoia. Or even our laughter. But not all stories are as famous as other. There are still some juicy legends that may surprise you. So here are 25 urban legends you never heard of (until now).

In the mid-1940s, the owner of a Georgia slaughterhouse set fire to the building, trapping his young bride-to-be and her lover inside. Although abandoned, 911 calls continue to come in from the building, and a woman has been seen walking along the top floor.

[dx_custom_adunit desktop_id="RTK_K67O" mobile_id="RTK_5yk0"] In December 1867, a passenger train was traveling through Angola, New York when the rear car broke free and rolled down an embankment, causing two coal stoves on board to break open. The resulting fire killed 50 passengers, and it’s believed the train and its passengers can still be seen traveling the area.

In the 1950s, a pig mask wearing man who lived on Holland Road would set pigs’ heads on spikes around his home to deter visitors. One night, three boys attempted to sneak onto the property and wound up with their own heads on spikes, while “Pigman” disappeared into the night.

The Woman in Grey

Two store employees watched as a woman in a grey dress entered, pulled a bottle of milk from a shelf, and left without paying. When they tried to chase her down, she had disappeared. This repeated several times until finally they were able to track her down to a local cemetery. Hearing an infant’s cry from a nearby grave, the two dug up the coffin, opened it, and discovered the woman’s corpse clutching a crying baby, surrounded by empty milk bottles.

[dx_custom_adunit desktop_id="RTK_K67O" mobile_id="RTK_5yk0"] Near Dumbarton, Scotland is a supposedly cursed bridge called Overtoun Bridge. Since the 1950s, at least 50 dogs have leapt over the bridge onto the waterfalls below for no apparent reason. And in 1994, a man threw his two-week-old son over the side, believing him to be the antichrist.

The Curse of Lake Lanier

When the reservoir was built in 1956, no one would have guessed it would go on to become the site of an oddly high number of water-related deaths and unexplained homicides. In 1958, two women went missing near the lake. 18 months later, the body of one of the women surfaced, missing both hands and two toes. The body of the other woman wouldn’t be found until 1990, but the area is said to be hunted by a woman in blue with no hands.

In Wisconsin, a troop of Boy Scouts left for a camping trip and never returned, disappearing without a trace. Versions of the story vary, with the Scouts’ demise coming at the hands of a bus driver, their troop leader, or a lantern fire. But people who venture into the woods say they hear the rustling of feet and witness flickering lights.

The Witch Girl of Pilot’s Knob

[dx_custom_adunit desktop_id="RTK_K67O" mobile_id="RTK_5yk0"] A mother and daughter accused of witchcraft in 1916 were both burned at the stake. While the mother’s remains were transported to a city far away, the daughter was buried in a steel-lined coffin that was then covered in stone and encased in crosses. Tiny footprints can be seen in the gravel surrounding her grave, and people have reported seeing a young girl trying to escape.

The Curse of Giles Corey

Giles Corey was one of the unlucky many who suffered through the Salem Witch Trials. Before he was pressed to death, he uttered a curse against Salem, and his ghost now appears before something terrible happens, like the 1914 fire that decimated much of the city.

In the 1950s, a deranged father blindfolded his young daughter and tied her to the train tracks, where she was subsequently decapitated. Her ghost still haunts the tracks, where people have reported seeing her, dressed in white, turn to face them with solid black eyes and bloody tears.

The Hitchhiker of Black Horse Lake

[dx_custom_adunit desktop_id="RTK_K67O" mobile_id="RTK_5yk0"] On a stretch of Highway 87 near Great Falls, Montana, a Native American man with long dark hair has been known to wander in front of passing cars, slamming into their windshields. When the drivers pull over to investigate, the hitchhiker has vanished, and there’s no damage to the car.

After a young Japanese girl became the victim of a train accident that severed her body in half, her spirit continued to haunt the train station, dragging her upper half to the sound of “teke teke.” Depending on the version, she either attacks her victims with a scythe or rips their legs off when they can’t correctly identify the location of her own.

In Westfield, New Jersey, a million dollar home comes with both a high price tag and a creepy stalker. Residents of the house have received letters from “The Watcher,” a person whose duty it is to watch over the property, but who also needs to ensure the “young blood” they’ve requested is used to fill the house.

[dx_custom_adunit desktop_id="RTK_K67O" mobile_id="RTK_5yk0"] Throughout Texas, black-eyed children will come up on unsuspecting victims in mall or fast food parking lots, as well as residential homes. They’ll ask for rides or money, and they’ve been known to cause a general feeling of anxiety and unease.

In Japan, people tell stories of the Ningen, humanoid lifeforms that live in the Antarctic waters. They’ve reportedly been spotted by government whale research crews, who claim they’re 20-30 meters long, are completely white, and have human-like arms or legs.

The Skirvin Hotel in Oklahoma is rumored to house dozens of ghosts, including those of crying babies and a particularly handsy shower spirit. But the most well-known is that of the original owner’s mistress, a maid who died on the 10th floor while pregnant with his child.

The Platte River Ship of Death

[dx_custom_adunit desktop_id="RTK_K67O" mobile_id="RTK_5yk0"] On the Platte River in Wyoming, a ghost ship will materialize out of the fog, its crew huddled over a body. Those who continue to look at the ship’s crew will find the body to be that of a still-living loved one, who will die soon thereafter.

In 1985, a couple blamed their house burning to the ground on a painting of a crying boy in their home that remained undamaged. More than 50,000 of the paintings have been sold in Britain, and numerous owners have claimed to have experienced the same tragic event.

In 1892, 19-year-old Mercy Brown succumbed to tuberculosis immediately following the deaths of her mother and sister. At the time, a vampire panic had swept over Rhode Island, so Brown’s heart and liver were removed, burned, and fed to her brother, who died shortly after. Her spirit continues to haunt the cemetery where she’s buried.

[dx_custom_adunit desktop_id="RTK_K67O" mobile_id="RTK_5yk0"] Ranging from Juneau to the northern Barrow region to Anchorage is an area known as the Alaska Triangle. Over the past 50 years, more than 20,000 people have gone missing there, prompting many to believe the area is haunted by evil spirits or trickster demons.

At Cedar Creek in Algoma Township, Michigan, an old preacher named Elias Friske tethered a group of children and lured them into the woods to kill them. He dumped their bodies into the creek, and people say you can hear the screams of children at night if you dare to cross the bridge.

Twice a year, Lucifer would visit a roofless church at Stull Cemetery in Kansas because it — and the land it was on — are a gateway to Hell. Rain wouldn’t land inside the building, which led the town to tear it down. The graveyard remains haunted by hanged witches and Lucifer’s son, who has a tombstone there, marked “Wittich.”

[dx_custom_adunit desktop_id="RTK_K67O" mobile_id="RTK_5yk0"] A man in Tennessee unwittingly became involved with a married woman. When her husband found out about the affair, he attacked the couple, stabbing his wife and skinning the man alive. His body was never recovered, and legend has it, his skinned corpse continues to haunt Lovers’ Lane, armed with the knife used on him.

For Native Americans in California, Turnbull Canyon is known as “Hutukngna,” which means the Place of the Devil. The ghosts of those who were killed for refusing Christianity haunt the area, as do a number of other supposed spirits connected with witchcraft, an insane asylum, and an alleged plane crash in 1952.

On Riverdale Road near Thornton, Colorado, the remains of an old mansion sit on charred land. According to legend, a madman burned his wife and children alive there, and now the ghost of a woman in white wanders the area, joined by the spirits of slaves who were hanged on the property.