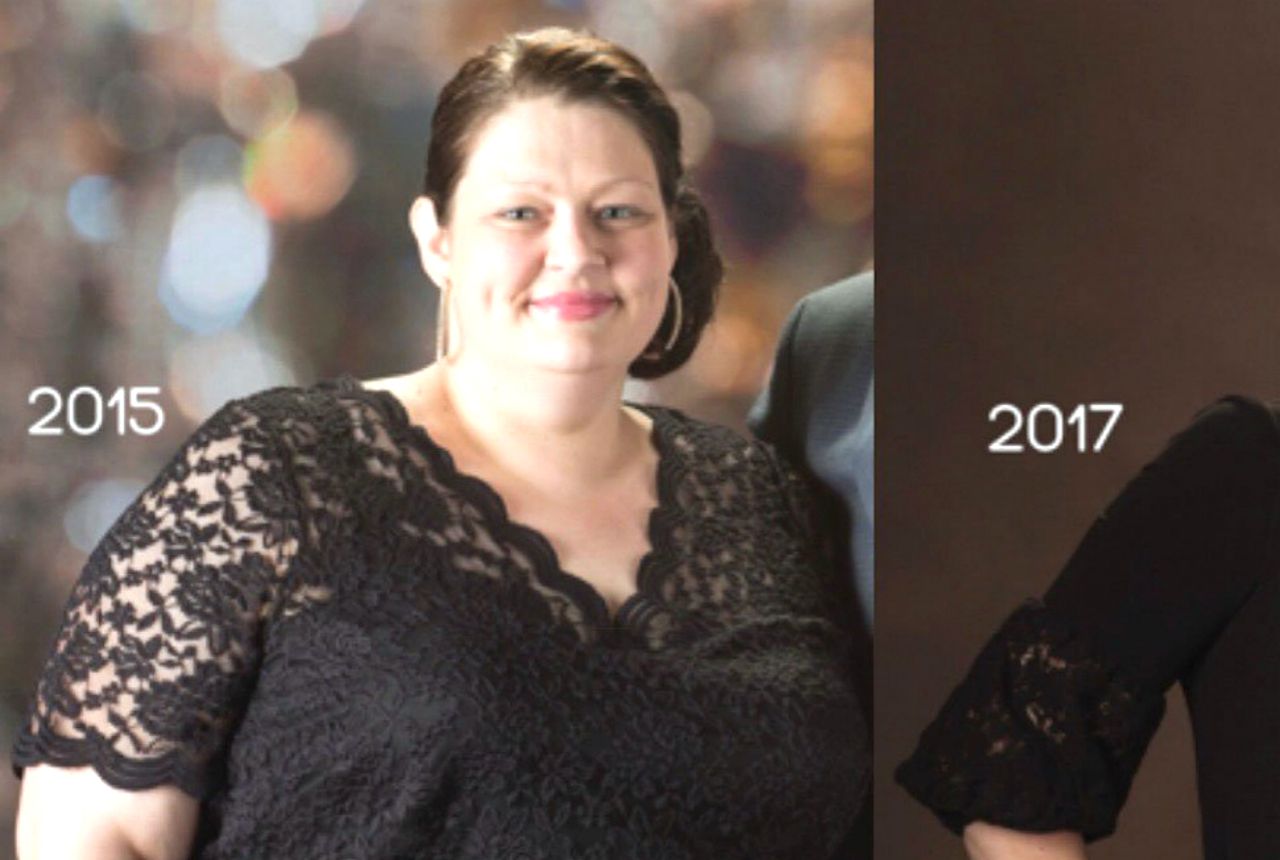 Getting back into shape can be a total nightmare. Just ask anyone who has tried to lose weight and keep it off for good. The first thing they’ll tell you is that it’s a lifelong struggle. But Amanda Wood decided she had hit rock bottom and needed to lose weight, stat. So she reached out to a nutritionist and a personal trainer, who offered her some much needed advice. That’s when Amanda Wood's weight-loss transformation began, and she discovered that the key to changing her life depended on her doing three things. After all, losing weight isn't about dieting for a week. It's about acquiring better eating habits that'll last a lifetime. Here's how this one woman lost more than 150 pounds will simple nutrition changes.

In the fall of 2015, Amanda Wood’s weight loss transformation began after years of feeling like she wasn’t really there. She told PopSugar, "There honestly wasn't any 'aha' moment. I just got tired of feeling invisible all the time.”

[dx_custom_adunit desktop_id="RTK_K67O" mobile_id="RTK_5yk0"] Wood had started to feel like no one was really looking at her anymore, and that completely destroyed her self esteem. In fact, to this day she feels as though people don’t often realize that the bigger you are, the more invisible you seem to be to others.

She Was Tapped Out

It wasn’t easy carrying around all that extra weight she had put on, and it had virtually left her tapped out and with virtually no energy. She shared with PopSugar, "I was just tired of being tired."

Before Wood started losing weight, she weighed 375 pounds and wore size 28 dresses. But she had a hard time admitting she needed help. "It makes me sad to even say that. I have never actually admitted to anyone how heavy I had been," she told PopSugar.

[dx_custom_adunit desktop_id="RTK_K67O" mobile_id="RTK_5yk0"] Her family doctor referred her to a nutritionist, and that nutritionist taught her how to lower the number of calories she ate on a daily basis and how to incorporate healthy portion sizes into her diet. But she also shared three tips that were very important for her weight loss transformation.

It took a lot of work, plenty of effort on her part, and a great deal of dedication. But two years after she had begun her weight loss journey, Wood had managed to lose 150 pounds by the time she was 37. She had definitely turned into a new woman!

Wood used an app on her phone to track everything she drank and ate. And as she continued to lose weight, she tracked the daily number of macronutrients, which makes up the calorie value of the food she ate.

Around noon, Wood will have chili, turkey meatballs with spaghetti squash, or chicken Caesar salad with low-fat Greek yogurt dressing. For an afternoon snack, she’ll have yogurt with fruit, crackers with cheese, or a pepperoni stick and an apple.

Breakfast is the most important meal of the day, so for Wood, her breakfast involves eating eggs or overnight oats. Since waiting until lunch time can be difficult sometimes, she’ll have a protein shake as a morning snack. Best of all? She loves sharing her food diary on her Insta account.

[dx_custom_adunit desktop_id="RTK_K67O" mobile_id="RTK_5yk0"] As Wood’s day starts to wind down, she’ll head down to the kitchen and prepare a meal that contains lean protein. This usually involves some type of seafood or chicken. She also accompanies the lean protein with some nutritious vegetables.

But What About Exercise?

It makes sense that dieting would also include exercising, but Wood had always felt umcomfortable in her own skin in the past. “I didn't enjoy working out and felt that everyone was judging me, so I always ended up quitting," she told PopSugar.

Wood knew she’d have to incorporate physical activity at some point, but she decided to wait until she lost 60 to 70 pounds before going to the gym and exercising. It turns out, that was a good call after all!

It Was Her First Time

[dx_custom_adunit desktop_id="RTK_K67O" mobile_id="RTK_5yk0"] Since she had already lost a couple pounds, she noticed that she had a great deal more energy than before. But she was still concerned about exercising because she had never really done it before. Little did she know, she'd end up falling in love with working out!

Her personal trainer provided her with three things that ended up transforming her life, (and body!) She had shown Wood a series of bodyweight exercises, taught her the proper form you need to properly perform these exercises, (which helped her avoid injuries) and also gave her the confidence to hit the gym.

She Now Loves To Work Out!

Wood’s trainer showed her how to use free weights, which she really enjoyed right away. Now she loves going to the gym and exercising vigorously. She told PopSugar, “I love pushing myself to try new things and heavier weights!” Really, there's no stopping her!

[dx_custom_adunit desktop_id="RTK_K67O" mobile_id="RTK_5yk0"] Amanda Wood's weight loss transformation was all about finding the perfect balance so she could learn to love herself while having a healthier relationship with the meals she consumes, even after she reaches her weight-loss goal.

Now She Indulges With Reason

When she exercises, she adds a couple of extra calories to her diet, and when she hangs out with friends, she’ll order herself a grilled cheese. “I can indulge within reason without throwing my goals completely off track,” she told PopSugar.

While some people would rather lose weight fast, Wood would rather reach her target weight at a slower pace. That way, she’ll be able to enjoy life’s little pleasures, which she would otherwise miss out on.

Her Clothes Didn't Define Her Anymore

[dx_custom_adunit desktop_id="RTK_K67O" mobile_id="RTK_5yk0"] One of the most unusual things that Wood has experienced on her weight loss transformationg was the realization that her clothes were a lot smaller now. When she takes out a pair of pants from the dryer, she still can't believe they belong to her.

Aside from having more energy, Wood can now shop for clothes at any store she wants. She can also board a plane without asking for a seat belt extender. But seeing the size of her clothes drop dramatically makes her feel incredibly proud of everything she's accomplished.

Instead of focusing on the number of pounds she wants to lose, Wood prefers to set mini goals in order to stay motivated. By doing this, she can concentrate on losing weight a goal at a time without the pressure of getting there "as fast as possible." Sometimes, easy does it!

[dx_custom_adunit desktop_id="RTK_K67O" mobile_id="RTK_5yk0"] Eating smaller bites helped Wood to reach her ideal weight. It certainly made it easier to manage her diet by eating bite-size chunks and focusing on losing five pounds instead of a bigger goal like losing 200 pounds. If you're constantly aware of how much you've got left to lose, you'll never celebrate how much you've already lost.

Wood is just a girl trying to get healthy one healthy meal at a time. She loves to shares tips and motivational messages on her Instagram, which also helpd hold her accountable of her weight goals. She also shares recipes and workout techniques, so if you're looking for a little inspiration, go check out her account!

Wood also gets a great deal of inspiration from others who use exercise and other healthy techniques to lose weight. She told PopSugar, “There are so many inspiring people that share amazing information and keep me motivated to keep going.”

[dx_custom_adunit desktop_id="RTK_K67O" mobile_id="RTK_5yk0"] "Be kind to yourself," she told PopSugar about dealing with the negative feelings you'll feel when trying to lose weight. She wants to remind people that you will experience days where you get off track on your diet, or where the struggle might seem like too much. But she urges people to not give up. If you fall off the horse, you get back on top again. After all, you're only human!