What Are the Weirdest Fan Traditions in Sports?

Zarouhi Mikaelian
What Are the Weirdest Fan Traditions in Sports? July 18, 2018 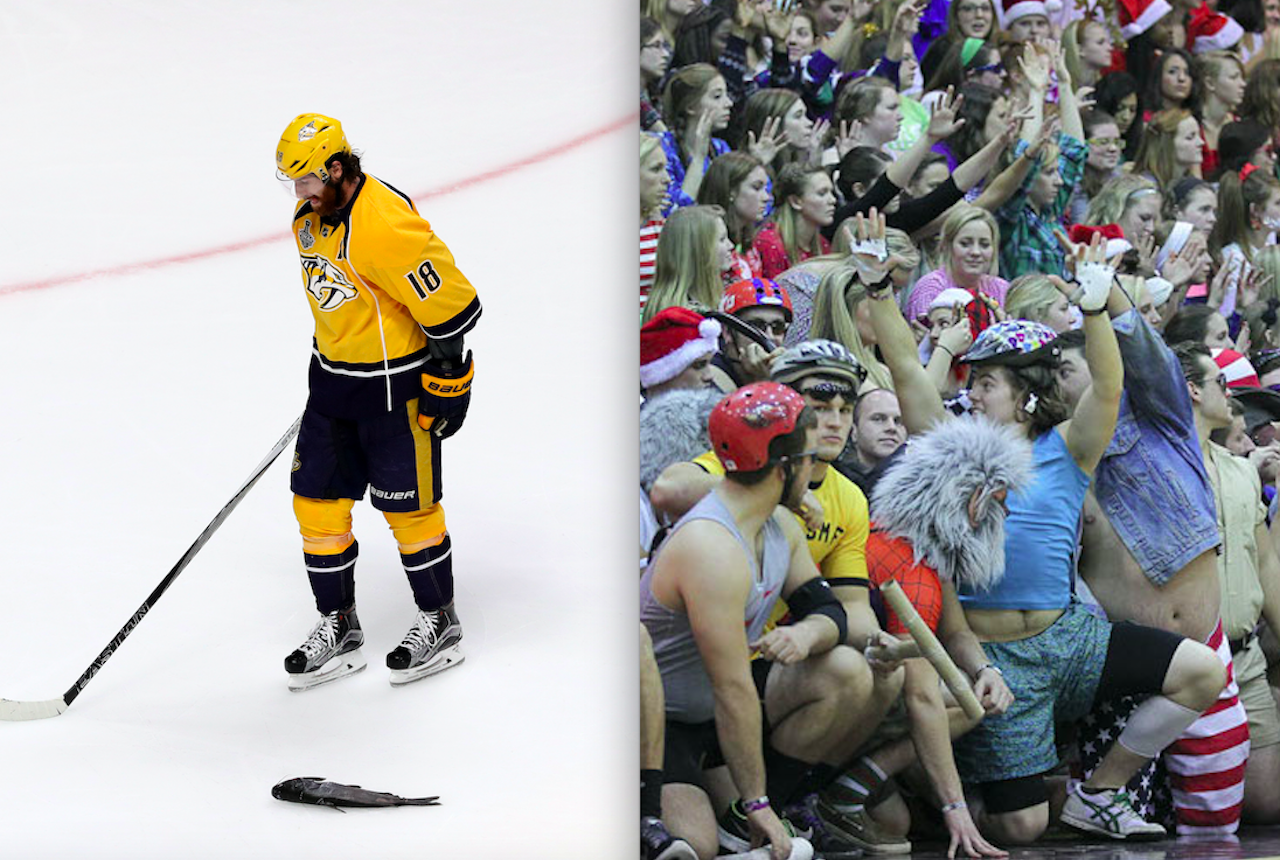 Fandom is responsible for so many acts that'd be insane otherwise. Throwing one's body through an table that's on fire? Just another Sunday for the brave/drunk members of Bills Mafia. TP'ing a basketball court to earn your team a technical foul on purpose? People do that too, in Arkansas. Risking a felony charge to burn upholstered furniture in the street? A common occurrence in Morgantown, West Virginia. And let's not forget throwing seafood onto the ice at hockey games, which apparently happens everywhere with a rink. Here are the craziest fan traditions in the sports world, in no particular order because I don't want any of these insane fans to hunt me down.

Every year, on the Friday before finals, students at the tiny Evangelical college in Indiana don all-out costumes and pack Odle Arena to watch a men's basketball game. The crowd remains silent until the Trojans score their 10th point, at which point, the place goes mad, and students rush the court.

Easily the most dangerous tradition on this list, every year, it seems Bills Mafia holds a contest to see who's the drunkest and dumbest Bills fan. Supporters regularly throw themselves through tables, but have recently upped the ante, sometimes lighting the table on fire, or replacing the table with an in-operation grill.

John Brown University fans cost their team a technical foul on every TP night, when students at the tiny Christian college in Arkansas cover their basketball court in toilet paper and storm the floor after the team scores its first basket. It looks like fun, but it's gotta annoy the hell out of opponents.

During the 1952 playoffs, Red Wings fan and owner of a local fish market Pete Cusimano chucked an octopus onto the ice at the Detroit Olympia. The creature's eight legs represented the eight wins then required to win the Stanley Cup. The tradition lives on, despite the NHL's efforts to curb it.

In the Predators' early years, home games against Detroit featured almost as many Red Wings fans as they did Preds fans, because the auto industry had moved so many jobs from Detroit to Nashville. Irked by the opposition's presence, Predators fans modified the Red Wings' octopus throw, chucking catfish onto the ice instead.

After big wins in any sport, Wake Forest fans take to the quad and cover the October Glory red maple trees with toilet paper. The tradition started around 1956, when the school moved from Wake Forest, North Carolina, to Winston-Salem. "On the old campus, students used to ring the bell in Wait Hall, an administration building," history professor Ed Hendricks told the school's website. "There was a bell pull that anyone could access, including students. When the university moved here, there were bells in Wait Chapel but no bell pull. Students had to find a new way to celebrate."

Late Raiders owner Al Davis coined the term "Raider Nation" in 1968, and the team's fans have run with it since, coming to games in terrifying costumes that fit with the squad's marauding, silver-and-black motif. The most hardcore members of Raider Nation sit in sections 104 to 107 at Oakland-Alameda Coliseum, otherwise known as the Black Hole.

Mountaineers fans love burning couches after big wins — so much that Morgantown has spent years trying to end the tradition. In 2005, fire officials ordered that "all upholstered furniture, debris and flammable objects" be removed from porches in student neighborhoods. Six years later, Morganton made couch burning a felony. That hasn't stopped Mountaineers fans.

The Hogettes were a group of 12 men who dressed in women's gowns, graden party hats, and pig snouts to support their squad and raise money for charity. Three members have been featured in an exhibit at the Hall of Fame. The group disbanded after the 2012 season. "Thirty seasons is enough of guys in pig snouts and dresses," Michael Tolbert, who founded the group in 1983, told the Washington Post. "... It's a new era. It was great seeing RGIII and Alfred Morris break onto the scene, and it’s a perfect time to retire the old era and start the new."

Real Seahawks fans know they ripped off the concept of the "12th man" from Texas A&M, where, the night before every home game, more than 25,000 fans show up at midnight for "yell practice" (a "yell" is Aggies' word for a "chant"). The tradition dates back to 1931, and is lit as hell.

In 2007, Chelsea banned their supporters from throwing celery onto the pitch, a tradition with mysterious origins, yet fans still carry the vegetable around as a show of support and shout the NSFW chant that goes along with it. Fans of Gillingham FC claim it was their tradition first, and that it came about because the veggie grew on their pitch, before Chelsea fans commandeered it.

A tradition since 1998, Badgers fans pass the time between the third and fourth quarters by doing exactly what House of Pain instructs listeners to do in "Jump Around." The tradition became so intense that school officials tried to cancel it over structural concerns at Camp Randall Stadium in 2003. But after a student protest, structural engineers confirmed the jumping wouldn't damage the stadium, and the tradition lives on.

Seriously, what's with hockey fans and the need to see sea creatures on ice? UNH fans throw a big-ass fish onto the ice after the team's first goal in each home game. In the 1990s, it cost the team a penalty, but Dick Umile, head coach from 1990 to 2018, didn't mind. "It's the Maine weekend, and the cops won't let the kid in with the fish," Umile once told the school's website. "I'm in the office before the game, and the students come to get me. So I go down there, get the fish from the cops, and we're walking in with the fish in the bag. The kids say, 'But coach, we're going to get a penalty.' I say, 'Don't worry about it. We'll kill the penalty. Just throw the fish.'"

Before the fourth quarter of Quakers football games, the Penn band plays a song called "Drink a Highball," which features the lyric "drink a highball and be jolly, here's a toast to dear old Penn!" But when the stadium stopped permitting alcohol at school football games — preventing supporters from doing as instructed — fans decided to get creative, tossing actual toast into the air.

In 1979, Denis Potvin of the rival Islanders injured Rangers center Ulf Nilsson with a massive hit (that Nilsson said was legal). Each time Potvin touched the puck that night, and every night he played the Rangers for the rest of his career, he heard "Potvin sucks!" Fans then started doing it when he wasn't around, chanting the line during the organist's rendition of "Let's Go Band." But Madison Square Garden banned the song to discourage "crude" behavior, so Rangers fans took matters into their own hands: Now, fans whistle the tune in the arena to prompt the cheer several times every game.