One-On-One NBA Player Matchups We Would Love To See 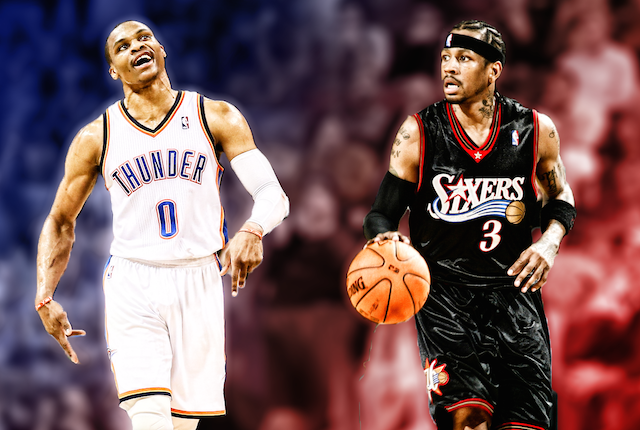 This would be incredible.

Battle of the best PF's of all-time.

Two of the most electric PG's of all-time. Westbrook's strength will allow him to score at will though.

A battle of two-time league MVP's would be really fun to watch. The only big difference is that Steph has the edge in three-point shooting.

Two of the best three-point shooters to ever play the game. Although they are similar, Reggie has the edge defensively.

NBA fans have always dreamed about a matchup between these two one-on-one. But Lebron is such a freak of nature athletically he can do anything in the paint.

MVP Derrick Rose vs. MVP Steph Curry would be incredible to watch. This would be an offensive shoot because these two aren't exactly known for their defense.

D-Wade would give Kobe a run for his money. D-Wade in the 06 Finals had one of the most dominating performances we have ever seen and he could definetly beat Kobe 1 v 1.

Scottie Pippen lived in MJ's shadow through his whole career. But there's a reason why.

I know you are all going to flip out because Shaq obviously had such a dominant career and was such a dominant player. But it would be so much closer than people think because of Dwight's strength in the post.

This matchup would be insane. Two of the toughest players to ever play the game going at it. Although Rodman has the size, Draymond is a lot better defensively.

There are people who say that if Penny didn't have all those injuries, he would be just as good as Kobe. Both playing in their prime would be great but you have to give the edge to the Mamba.

This matchup would be so fun to watch just because of all the drama behind it. But we know that Durant would punk Westbrook in the post and won't stand a chance defending KD's shot.

We saw flashes of them go at it in the NBA Finals but, Hakeem obviously had the upper hand because of experience. If they both played in their prime, it might be a little different.

The two best to ever play this game. Can we please turn back the clock to watch this??

The matchup that EVERYONE on planet Earth wants to see but will never see in their prime. MJ has the ability to score at will but LeBron's size, speed, and strength is so overpowering for anyone.

Tracy McGrady was basically Kobe before his injuries. Both of them healthy and in their prime one-on-one would be really fun to watch.