The Most Hilariously Dumb Sports Quotes Of All Time

Zarouhi Mikaelian
The Most Hilariously Dumb Sports Quotes Of All Time April 16, 2018 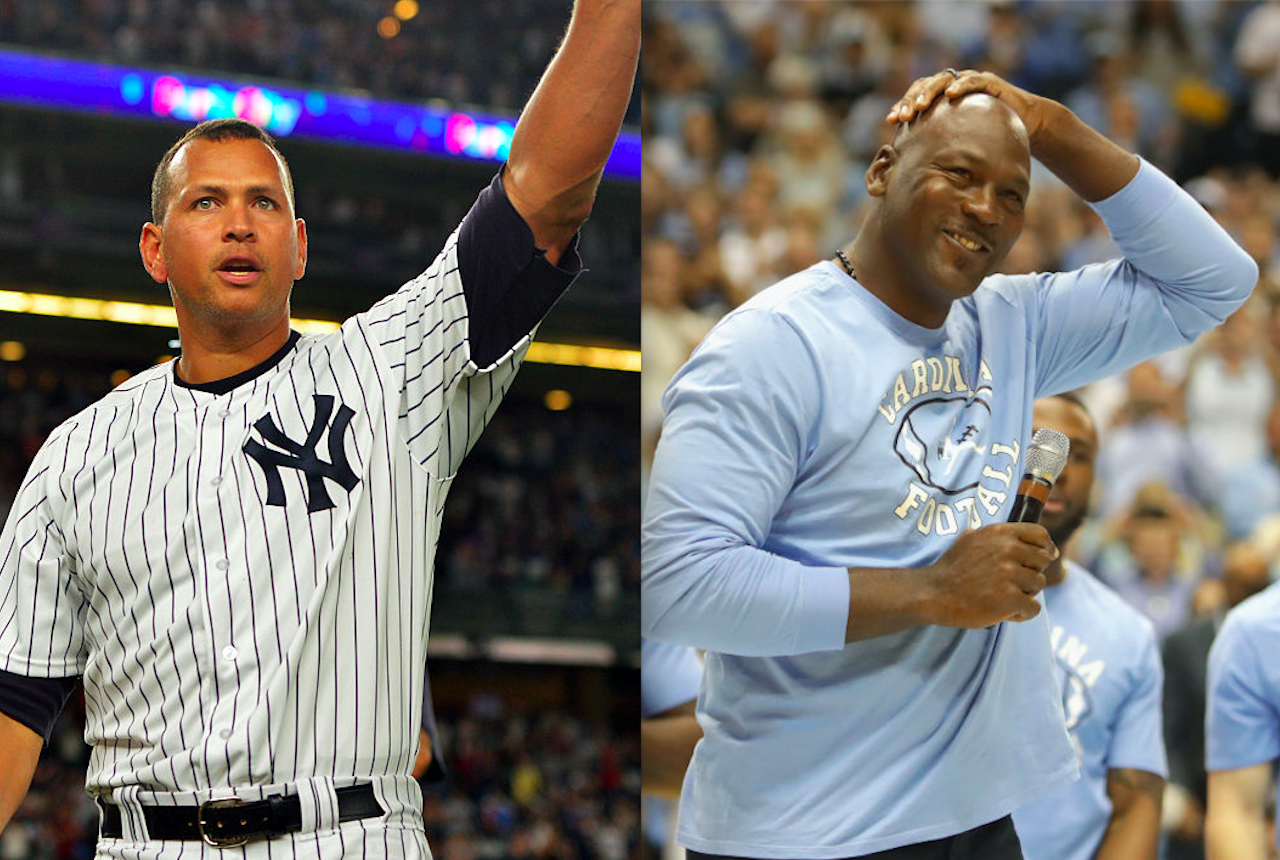 Sports quotes that are so dumb they'll make your head spin

An athlete doesn't have to be a soccer player, an NFL kicker or a kickboxer to shock sports fans with what feet can do. Instead, all they have to do is lodge those feet into their dumb mouths. Now, don't get us wrong. The sports world offers its fair share of intellectuals. But plenty of representatives fall unfortunately hard into the "dumb jock" stereotype. So here are a bunch of sports quotes that are so dumb, they'll make you dizzy. Except we had to exclude those from Charles Barkley so as to give others a chance to shine. It's only fair.

"We're going to turn this team around 360 degrees," said future Hall of Fame point guard Jason Kidd after the Dallas Mavericks selected him out of UC Berkeley with the second overall pick of the 1994 NBA Draft. It took him 17 years and stops with two other teams, but he finally turned the team around 180 degrees with a championship in 2011.

[dx_custom_adunit desktop_id="RTK_K67O" mobile_id="RTK_5yk0"] "Don’t say I don’t get along with my teammates," Owens said. "I just don’t get along with some of the guys on my team." One can understand the confusion, as it's highly likely that no one has ever been able to withstand a conversation with Owens for long enough to explain what a teammate is.

"Any time Detroit scores more than 100 points and holds the other team below 100 points, they almost always win," the former NBA player and head coach and current NBA analyst once said. With expert analysis like this, how does this guy not have another coaching gig already?

"Yankee pitchers have had great success this year against Cabrera when they get him out," said the two-time All-Star catcher, two-time World Series winner, and longtime broadcaster, famous for his senselessly meandering mouth. Anyone familiar with McCarver's work in the booth knows this won't be his last appearance on this list.

[dx_custom_adunit desktop_id="RTK_K67O" mobile_id="RTK_5yk0"] "I enjoyed the Luge," His Airness said. Unfortunately, Michael Jordan was referring not to his favorite sport in the Winter Olympics, but to one of the highlights of a trip to Paris, France: the Louvre, arguably the most famous museum on the face of the planet.

In the quarterfinals of the 1990 World Cup, England, led by manager Bobby Robson, barely squeaked by Cameroon, winning 3-2 on the strength of two late penalty shots, one in the 83rd minute and a game-winner in stoppage time. "We didn't underestimate them," Robson said. "They were a lot better than we thought."

"We must have had 99 percent of the match," said Dutch soccer legend and guy who couldn't have had great math grades Ruud Gullit. "It was the other three percent that cost us." Yet another example of why it's so important to always give 102 percent.

[dx_custom_adunit desktop_id="RTK_K67O" mobile_id="RTK_5yk0"] The Hall of Fame wide receiver has more catches than anyone in the history of the NFL, but Jerry Rice couldn't catch what was wrong with this sentence, instead letting it soar over his head: "I feel like I'm the best, but you're not going to get me to say that."

In 2012, the broadcaster blamed global warming for a rise in home runs: "It has not been proven, but I think it will be proven that the air is thinner now, there have been climactic changes over the last 50 years in the world, and I think that's one of the reasons balls are carrying much better now than I remember." There's plenty to blame on global warming. An increase in home runs is not one of them.

"The word 'genius' isn't applicable in football," Theismann once said. "A genius is a guy like Norman Einstein." Dumb, but not as dumb as it sounds: Theismann went to high school with a guy named Norman Einstein, who was the class valedictorian and went on to become an emergency room physician. Possibly due to too many head hits from Lawrence Taylor, Theismann referred to the Einstein no one knows.

[dx_custom_adunit desktop_id="RTK_K67O" mobile_id="RTK_5yk0"] David Beckham: good at free kicks, bad at vocabulary. When the now-retired midfielder was asked if he was a volatile player, he apparently confused "volatile" with "versatile": "I can play in the center, on the right, and occasionally on the left side." Oh, you beautiful idiot.

Lee Corso won 73 college football games as a head coach before becoming an analyst for ESPN in 1987. But man, does the guy with the "Not so fast, my friend" catchphrase suck at geography. "Hawaii doesn’t win many games in the United States," Corso said of the University of Hawaii Warriors.

"God created the sun, the stars, the heavens, and the earth, and then made Adam and Eve," the 2005 World Series champion once said. "The Bible never says anything about dinosaurs. You can't say there were dinosaurs when you never saw them. Someone actually saw Adam and Eve. No one ever saw a Tyrannosaurus rex." Let this be the answer to why Everett played for nine teams in his 14-year career.

[dx_custom_adunit desktop_id="RTK_K67O" mobile_id="RTK_5yk0"] As a three-time Gold Glove-winning center fielder and one-time All-Star who had a 17-year career in the major leagues, Mike Cameron covered a lot of ground. One thing he didn't cover: astronomy. "The sun has been there for 500, 600 years." Somewhere in that range, probably.

One shouldn't expect much in the intelligence department from someone who gets punched in the face professionally, but boxer Alan Minter's thoughts on the dangers of his sport will make you wish he'd punch you in the face instead: "Sure there have been injuries and deaths in boxing — but none of them serious."

Apparently, the mother of the ex of the former New York Yankees slugger had a point when she said A-Rod didn't have much going on between the ears aside from baseball. "Therapy can be a good thing; it can be therapeutic," the 14-time All-Star and 2009 World Series champion said. By definition, yeah.

[dx_custom_adunit desktop_id="RTK_K67O" mobile_id="RTK_5yk0"] Parents, keep this Hall of Famer away from your kids. "I want all the kids to copulate me," Dawson said when asked about his role model status. Unfortunately for the 1987 National League MVP, "copulate" is not a clumsy portmanteau for the words "copy" and "replicate" — it means "engage in sexual intercourse."

In one fell swoop, the major leagues' all-time steals leader confirmed that he couldn't do math to save his life and gave others cause to suspect he used steroids. "Well, I'm not one of them," Rickey Henderson said in response to a writer's assertion that 50 percent of the league was on steroids. "So that’s 49 percent right there."

Before his 1980 Heisman Trophy-winning season with the South Carolina Gamecocks, running back George Rogers wanted to set his goals high. How high, he wasn't exactly sure, because numbers apparently perplexed him to no end. "I want to rush for 1,000 or 1,500 yards, whichever comes first." The 1,000 yards came first, then the 1,500, before he ultimately finished with 1,781.

[dx_custom_adunit desktop_id="RTK_K67O" mobile_id="RTK_5yk0"] "I don't know, man," Mike Tyson said of his future plans after getting knocked the hell out by Lennox Lewis in June 2002. "I guess I'm gonna fade into Bolivian." Maybe the former boxing heavyweight champion of the world should have dissolved into the landlocked South American nation of Bolivia, as he'd get knocked out in two of his next three fights before calling it a career.

The man responsible for arguably the most pervasive meme of all time yielded yet another entry into the Meme Hall of Fame when he told a packed Dean Smith Center at the University of North Carolina that "The ceiling is the roof" during halftime of a game against archrivals Duke.