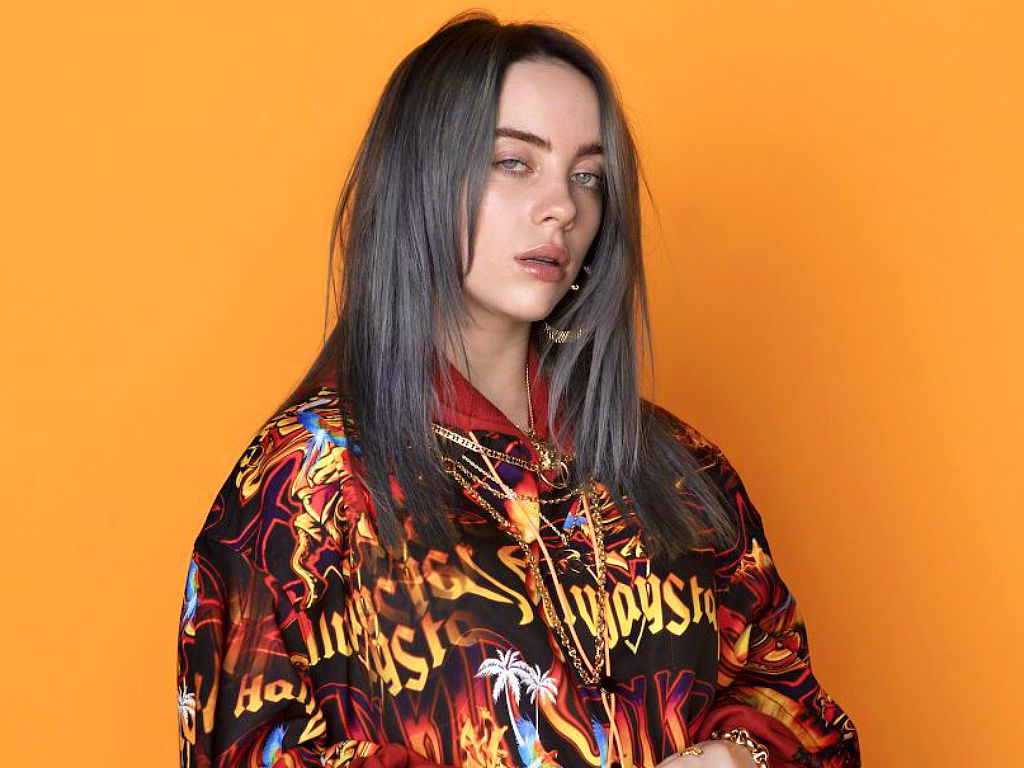 At an incredibly young age, the singer behind "Bad Guy" and "All The Good Girls Go To Hell" has already broken music records. Below are some facts about Billie Eilish that prove she's worthy of her crowning achievements, and some bizarre pieces of information that you didn't know before!

Her Middle Name is "Pirate"

Billie Eilish was born December 18th in Highland Park, Los Angeles. Her full name is Billie Eilish "Pirate" Baird O'Connell. Her parents originally wanted her first name to be Eilish after watching a documentary on conjoined twins but decided to call her Billie in honor of her late grandfather. She earned the nickname "Pirate" from her brother Finneas when she was four years old.

Eilish, at eight years old, was a member of the Los Angeles Children's Choir where she developed her skills as a singer and was taught how to "not ruin [her] voice completely." Billie's love for singing often came at her family's expense as she revealed to Vogue that "I sang so much that my family had to shush me." She began to write music at eleven years old.

Talent Runs in the Family

Billie's parents- Maggie Baird and Patrick O'Connell- aren't new to the Hollywood stardom scene. Baird is an actress whose credits include "Picket Fences," "Birds of Prey" and "Bones." She's also lent her voice to video games like "Vampire: The Masquerade- Redemption" and "Mass Effect 2." O'Connell is also an actor who has appeared in "Guiding Light," "Iron Man" and "Supergirl" as General Mathers.

Her Mother is so Proud

During her time with James Corden on "Carpool Karaoke", the host got to visit the singer's home and interview her mother regarding the young talent's rise to stardom. Watching her daughter's growing success "has never not been mind-blowing" revealed Maggie. Growing up, Maggie always encouraged her children's talents and when they'd make music, she would constantly ask "when is it going to come out?" She wanted Billie's songs to be heard by "everyone in the world" and now that it's happening, "it's too amazing."

Her Brother Produces Her Songs

Billie's brother Finneas helps her write and produce her music. In October 2015, he introduced her to the song "Ocean Eyes" which he'd previously been performing with his band. Calling him her "partner in crime," the two have continued to work closely together when it comes to music with Finneas producing all 14 tracks on Billie's album "When We Fall Asleep, Where Do We Go?"

She Suffers From Tourettes Syndrome

In an interview with Ellen, Billie revealed she's been living with Tourettes Syndrome which involves "involuntary movements and vocalizations." Officially diagnosed in November 2018, the singer was moved to reveal her disorder when videos of her performances began to appear visibly pointing out her tics (she experiences physical ones rather than auditory). She admitted she was hesitant at first to reveal her disorder because "I didn't want that to define who I was" but since doing so, she feels she's developed a deeper connection with fans, some of whom also have the disorder.

She Also Has Synesthesia

Eilish also revealed that she has synesthesia, a condition where certain sensory perceptions are associated with colors, letters, names, and/or numbers. During an interview with Rolling Stone, the singer said everyone she knows "has their own color and shape and number in my head."

Growing up, Billie loved horseback-riding. Instead of paying for lessons, she learned to ride by working at the local stable near her home. Still struggling with her confidence, the singer stopped going because "she couldn't take being the poor girl" surrounded by more social and richer girls. She also had her heart broken when she had to let another girl (who could afford the lessons) ride her favorite horse— a black mare named Jackie O— and decided to officially quit riding altogether. Billie continues to visit the stable and Jackie O in between touring "just to be with her."

She Lives a Clean Life, Despite Her Lyrics

Though most of her music has a very rebellious tone and contains explicit lyrics, Billie herself is a well-adjusted teen who plays by the rules. She's never taken drugs, doesn't drink alcohol or soda, eats healthy (she's a vegetarian), and if you listen closely, none of her songs contain swears despite her frequent potty mouth outside of the recording studio. In their feature article about the artist, Rolling Stone referred to Eilish as "an antihero who's safe to listen to with Mom and Dad in the car."

She's a Huge Fan of "The Office"

Eilish is a huge "The Office" fan and demonstrated her obsessive love for the show during an interview with Rainn Wilson, who played Dwight Shrute, where he quizzed her about the beloved series. In her song "My Strange Addiction," Billie uses samples from the episode "Threat Level Midnight."

As with most young girls, Eilish found herself smitten when it came to Justin Bieber. In a radio interview with KROQ, the songstress revealed Bieber "was like my first love" when she was twelve. She would fantasize that "he was in love with me" and they were in "a relationship." She recalled times when she would cry over the possibility of finding a boyfriend who wouldn't compare to the Canadian heart-throb of her dreams and how "it wouldn't be fair" to her future partner.

Not only is Eilish the youngest singer (at only 17 years old!) to have a #1 single on Billboard, but also the first female to have a #1 album in the UK. After the release of "When We Fall Asleep, Where Do We Go?", all fourteen songs instantly shot to the Billboard Top 100. Before becoming a star in her own right, Eilish opened for Florence at the Machine in 2018.

She's Open About Her Influences

Some of Billie's major influences when it comes to her music are The Beatles, Green Day, Avril Lavigne and Justin Bieber. She also credits Lana Del Rey's "unique and wide-ranging vocal delivery" on "Off to the Races" as one of her main inspirations. She's also a huge fan of Tyler, the Creator and Childish Gambino.

When it came to the music video for her song "you should see me in a crown," Eilish collaborated with Japanese artist Takashi Murakami. The animation, which features a cartoon version of the singer and the artist's iconic rainbow flowers, took "8 months from start to finish." The collaboration also inspired a July 2019 "making-of exhibition" in Tokyo's Animanga Zingaro Gallery which included preliminary sketches for the video.

Don't Tell Her to Smile

What completes Billie Eilish's tough chick style is her iconic "don't freak with me" facial expression. Her lack of smiling is due to her hatred for the common pleasantry stating "it makes me feel weak and powerless" and her belief that the polite gesture often feels like a forced action. The singer asks that if you even encounter her on the street "don't smile at me."

A Unique Voice Has Gained Her Notoriety

While some have recently criticized the singer's "whisper-talk" in her songs, Eilish has gained many supporters of her "ethereal" tone. Among her admirers are Demi Lovato, Elton John, Britney Spears and Julia Roberts.

The singer's baggy style of clothing is very much a double-edged sword. Her oversized aesthetic and love of bold colors expresses her desire to stand out from the crowd and get "out of [her] comfort zone." However, being a female in the music industry, Billie is aware of the sexist criticism that surrounds her success. Another reason for her outfit choices is the need to prevent people from body-shaming her, using the baggy style as a shield against comments concerning her chest.

The singer's struggle with body dysmorphia started when she joined a competitive dance company at twelve years old. Surrounded by "really pretty girls," she began to feel less confident about herself. Having to wear "really tiny clothes" also didn't help and made Billie afraid to "look in the mirror at all." To make matters even worse, during a hip-hop class, she suffered a ruptured growth plate in her hip, ending her dancing career and triggering a self-harming depressive state.

She's Afraid of the Dark

During an interview with Rolling Stone at her home in Los Angeles, Eilish revealed that despite her intimidating exterior, she does experience ordinary fears like most people. Her fears include the ocean and her garage and closet at night. She often races to bed after the lights go out "in case there's a monster underneath waiting to grab her." The singer admitted she had to stop watching horror movies due to having intense nightmares and suffering sleep paralysis.

"When We Fall Asleep" is About Her Fears

All the songs on the "When We Fall Asleep, Where Do We Go?" album feature something unexplainable that happens to you when you're sleeping like "sleep paralysis, night terrors, nightmares, [and] lucid dreams." Her lyrics attempt to describe "the feeling" these involuntary actions trigger.

In an interview with Pop Crush, Billie revealed her love for the horror film genre stating some of her favorite movies are "Get Out" and "The Babadook." She also enjoys watching "American Horror Story" and used "The Walking Dead" as inspiration for her song "Fingers Crossed." While most people found "The Human Centipede" franchise deeply unsettling, the singer found the first film "really hilarious."

The Outpouring of Love is Humbling

Billie adores her millions of fans and considers them "my family; they're the only reason I'm anything" according to Harper's Bazaar. She tries to dedicate her attention to them as much as possible, whether through social media or real-life interactions. Hearing stories about how her music has gotten her fans through hard times brings "shivers" down her spine and inspires her to continue contributing to the music industry.

Social Media is Her Strange Addiction

As much as Billie maintains contact with her fans on Instagram and through DMs, the singer admits she has a "love-hate relationship with social media." She considers it to be "insanely dangerous" and believes it "can ruin something," including the person using it.

In November 2019, the singer launched a children's clothing line including sweaters and onesies ranging from $20 - $60. The apparel is available to purchase on her website along with other merchandise related to her albums. The artist also has a collaboration with Urban Outfitters offering exclusive graphic t-shirts and hoodies for $44 - $79.

Eilish told Variety magazine, “Women should say, should do, and feel, and be exactly what they want. There should be nobody else telling them how to live their life. It just makes me so mad that if I start talking about it, I won’t stop. Men should not make women’s choices — that’s all I have to say.”