These Celebrity Halloween Costumes Blew Heidi Klum Out of The Water 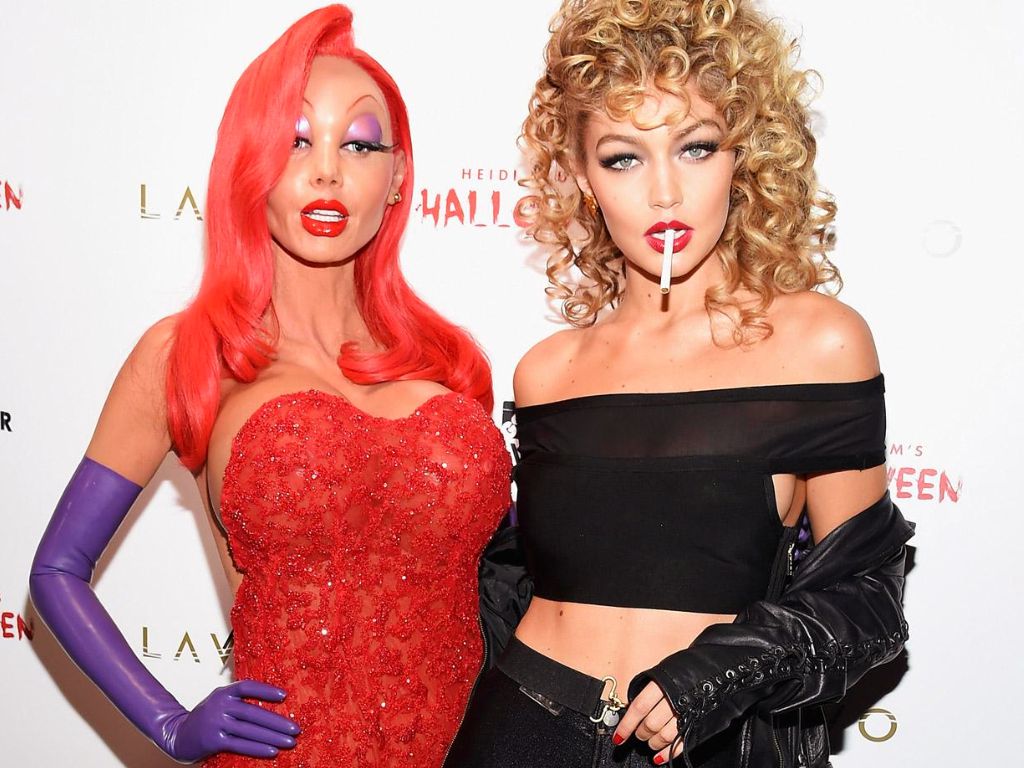 Halloween is one of the most anticipated times of the years. However, the only costumes that truly wow us are the ones worn by our favorite celebrities. Since the early days of Hollywood, we've been fascinated with what celebs were wearing and Halloween night is no exception. So here's our list of the best Halloween costumes worn by celebrities over the years...

Kendall Jenner as a Fembot

Last year Kendall Jenner wore this stunning costume to the Casamigos Halloween party in Las Vegas. Kendall dressed as a female robot, or fembot from the film, "Austin Powers: International Man of Mystery." Tay Hasselhoff attempted a similar look, but it was not as classy as Kendall's costume. Kendall also nailed the golden bouffant hairstyle.

Who would have thought that this gorgeous singer-songwriter-actress could be mistaken for Post Malone? Well, with the right attire, some fake tattoos, facial hair and a wig, it was possible. Last year, Rita dressed up as the rapper to attend the Kiss Haunted House Party.

Lupita Nyong'o, aka Oscar award-winning actress, recreated Dionne's classic look from the '90s cult-classic film "Clueless." When she arrived at Heidi Klum's Halloween party last year, she had every detail down, including the hat. And check out the bedazzled phone. We are totally butt crazy in love with this look.

Heidi Klum's Halloween party last year was full of iconic looks. When Bella Hadid and The Weeknd arrived as Lydia and Beetlejuice, everyone was stunned. This couple looked camera ready, so much so that someone stated a photographer stampede almost ensued on the red carpet. Also, Bella is wearing a diamond snake ring from Colette that's worth $7,200.

One of the best Halloween costumes from 2016 was Kylie Jenner as Christina Aguilera from her "Dirrty" music video. This look is a dead-ringer from head to toe. Kylie is wearing the black-and-blonde braids and a lip piercing, which was fake. Christina saw the post and reposted it to her story, praising the then 19-year-old Kylie for her look.

Evan Rachel Wood is most popularly known today as Dolores Abernathy on the HBO series, "Westworld." In 2010, Evan arrived at a Halloween party in LA as Magenta from "Rocky Horror Picture Show." Ironically, she played Magenta at the Wiltern years ago.

Carmen Kass, a model from Estonia, has been the face of brands like Michael Kors and walked the runway for designers like Calvin Klien, Ralph Lauren and Donna Karan. Back in 2002 when Carmen went to a Halloween Party hosted by Dolce & Gabbana, she arrived in fashion. Carmen dressed as Mia Wallace from "Pulp Fiction," looking similar to Uma Thurman.

Do a double-take because that's not Pamela Anderson and Kid Rock. It's actually Ariel Winter, from "Modern Family," and her boyfriend, Levi Meaden. They wore these costumes last year for Halloween, taking inspiration from what Anderson and Rock had worn to the 2002 AMAs.

In 2017, Lady Gaga created this spot-on Edward Scissorhands costume. The attention to detail from the scratches on the face to the disheveled hair has us gagging. Now we do have to note that Rami Malek also dressed as Edward that same year. However, Gaga had him beat. Rami looked good from the neck up, by his costume failed in comparison to Mother Monster.

Jason Derulo as the Night King

Sometimes you can't tell what is hiding underneath a mask. This camera-ready Night King is, in fact, singer Jason Derulo. He did this full transformation for a performance at Maxim's Halloween party in 2017. His crew, including the backup dancers, dressed up in coordinating costumes.

When "It" was released in September of 2017, many found inspiration for their Halloween costumes. The most frightening was LeBron as Pennywise. He was unrecognizable. Frankly, he was more terrifying than Bill Skarsgård, who played Pennywise in the film. Imagine seeing a 6' 8" clown dancing towards you.

Neil Patrick Harris & Family as Ghosts from the Haunted Mansion

Neil Patrick Harris and David Burtka have been creating the most perfect family Halloween costumes since their twins, Harper and Gideon, were born. In the past, they have done coordinating looks from "Star Wars" and "Alice in Wonderland." But last year, to showcase their love for Disney, they dressed as ghoulish characters from the Haunted Mansion attraction.

Over the years, many celebrities have attempted to create the perfect Barbie costume for Halloween. But none compare, or will probably ever compare, to when Queen B did it back in 2016. By the way, this was her second Halloween costume of the night. For her first costume, she recreated the looks from Salt-N-Pepa's video "Push It" with her daughter and mother.

If you look closely, you'll be able to tell that the Danny DeVito-look alike is really Jessica Simpson. Last year, Jessica created this look with her husband, Eric Johnson. The two recreated the cover from the 1988 movie, "Twins" which starred Arnold Schwarzenegger and Danny DeVito.

Two years ago, both Demi Lovato and Kim Kardashian West dressed as the Queen of Tejano music, Selena Quintanilla. While Kim's look was cute, Demi's was on point. Demi had the bangs, the makeup and the sparkly jumpsuit down. Seeing her as Selena, the similarities are undeniable.

Singer and songwriter Ciara turned heads last year when she arrived as Princess Nakia to the Bacardí Halloween party. Her family joined her by wearing other "Black Panther" costumes. Lupita Nyong'o, who played Princess Nakia in the film, showed her love for Ciara's Wakandan attire by commenting, "My Wakanda Knots have unraveled!" after reposting one of Ciara's videos.

On Halloween of 2017, Chance The Rapper and his wife, Kirsten Corley, recreated the famous photo of friends Tupac Shakur and Jada Pinkett-Smith. There are slight differences, but it's the attention to detail that matters. Kirsten wore similar jewelry as well as a close lip color to Jada, and Chance had a nose piercing with a golden chain hiding under his shirt.

Ginnifer Goodwin, best known for playing Margene Heffman on "Big Love" and Snow White on "Once Upon A Time," should add Rosemary Woodhouse to her resume. If anyone ever wants to remake "Rosemary's Baby," Ginnifer seems like a good contender. Who would have thought that Ginnifer and Mia Farrow looked so similar?

Gigi Hadid as Sandy from 'Grease'

The same year that Heidi Klum became Jessica Rabbit, Gigi Hadid transformed into the good girl turned Pink Lady. How does Gigi look so good as Sandy? She was styled by Monica Rose, the former stylist for the Kardashians. All of the pieces Gigi wore were purchased from stores like American Apparel and House of CB.

Dylan Sprouse and Barbara Palvin as Future Trunks and Gaara

Dylan Sprouse, twin brother of "Riverdale" star Cole Sprouse, and his girlfriend model Barbara Palvin dressed as anime characters and it was adorable. Dylan was "Dragonball" character Trunks and Barbara dressed as Gaara from the "Naruto" franchise. Totally odd choices, but it was one of the best costumes of the year.

Nicki Minaj and her new husband Kenneth Petty, who tied the knot earlier this year looked stunning as Harley Quinn and the Joker. This look makes us so excited for the new Suicide Squad movie "Birds of Prey," coming out next year.

When one bases their Halloween costume on a non-human animated character, the result can fall flat. That turned out to be false for celebrity couple Heidi Klum and Tom Kaulitz. Last year, the two spent a majority of their day in the makeup chair to undergo this ogre transformation.

Alessandra Ambrosio dressed up as Jessica Rabbit back in 2016, but this could not compare to when Heidi Klum transformed herself into the animated femme-fatale. To create this look, it took Heidi several hours in the makeup chair. She even met with her team weeks prior to plan and create molds of her body needed to create this get-up.

Heidi Klum as a Werewolf

Never failing to disappoint us, back in 2017, Heidi Klum arrived at her Halloween party dressed as a werewolf from Michael Jackson's "Thriller" music video. Her friends joined in on the holiday spirit by dressing as zombies. Together they performed a rendition of the famous dance.