Where Are They Now? The Cast of ‘Ned’s Declassified School Survival Guide’

Sarah LaPointe
Where Are They Now? The Cast of ‘Ned’s Declassified School Survival Guide’ October 29, 2019Leave a comment 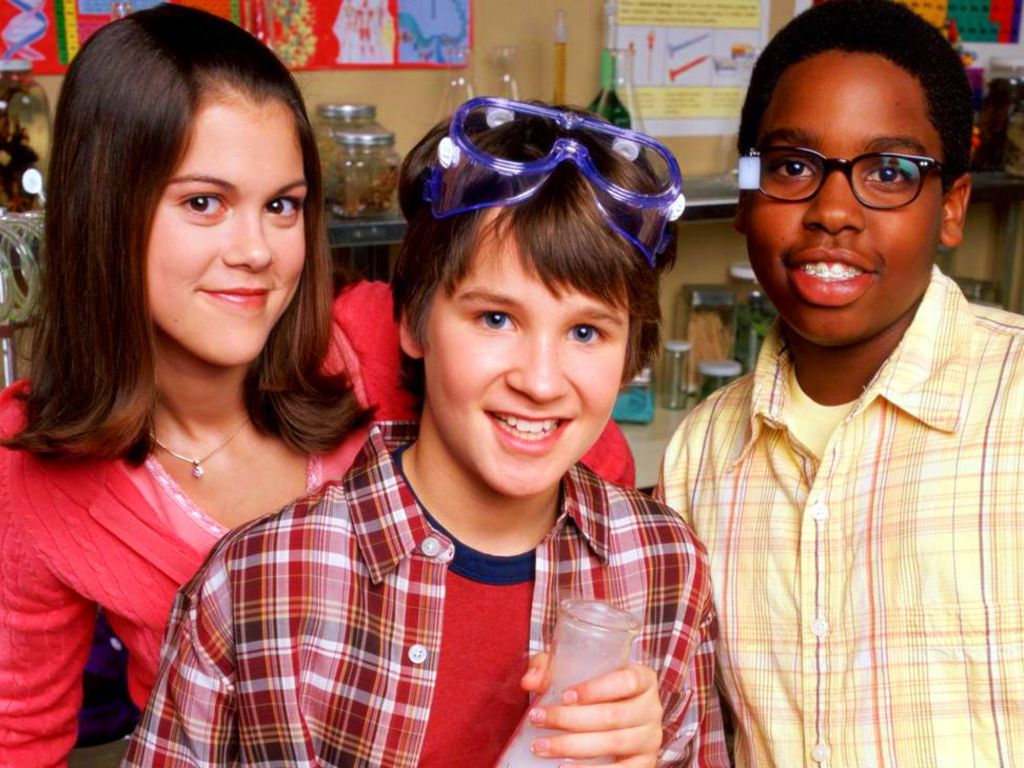 Debuting in 2004, "Ned's Declassified" followed a trio of best friends as they attempted to navigate middle school life. Throughout the show, main character Ned would offer "tips" on how to survive every obstacle from handling bullies, to studying for tests and charming crushes. Since graduating from the eighth grade, many of the students at James K. Polk Middle School have continued their acting careers while some have decided to explore new territory.

As the main protagonist, Werkheiser played Ned Bigby. Each episode centered around Bigby's "self-help" guide to surviving every aspect of middle school from escaping a bully's wrath to preparing for pop quizzes. Before his breakout role on "Ned's Declassified," Werkheiser appeared in "We Are Soldiers" and voiced the friendly ghost in "Casper's Scare School."

Since his Nickelodeon days, Werkheiser has starred in "Love At First Hiccup," "The Prankster" and "Sundown." He's also appeared on a variety of television shows such as "Greek," "Criminal Minds" and "2 Broke Girls." Werkheiser is also a talented musician, releasing a number of hit singles from 2011 - 2016. He recently appeared in the direct-to-video Christmas movie "Santa Girl" with "Wizards of Waverly Place" star Jennifer Stone.

As Jennifer "Moze" Mosely, Shaw was the most level-headed and atheletic of the trio of troublemakers. Towards the end of the show, she began to develop romantic feelings for her childhood best friend Ned and the two began dating. Her role on "Ned's Declassified" was her acting debut.

After "Ned's Declassified," Shaw went on to star in numerous television series such as "Aliens in America," "10 Things I Hate About You," "Faking It" and "Pretty Little Liars." She is set to star in "Reboot Camp" which is currently in post-production.

Playing Simon "Cookie" Nelson-Cook, Lee was the goofy nerdy one of the group who harbored a desperate crush on Lisa after her makeover despite shrugging off her early advances before her transformation. After some uncredited performances, Lee made his acting debut on "The Shield" before appearing in "Ned's Declassified."

Lee has gone on to appear in television shows such as "Good Luck Charlie," "Zeke and Luthor," "Glee" and "Crazy Ex-Girlfriend." He's also been the writer and director for various shorts and the television movie "Bollywood to Hollywood." He's set to appear in "Fruit of the Poisonous Tree" which is currently in pre-production.

Frequently tormenting Ned and his friends and causing chaos at James K. Polk Middle School, Swann played Billy Loomer. As the class bully, Swann showed aggression towards most of his classmates but showed a softer side to Moze whom he had a crush on. After Moze began dating Ned, Loomis became the reluctant boyfriend of Suzie Crabgrass and the two began a strained relationship based on their need to control each other.

Swann hasn't been up to much since "Ned's Declassified" except for a 2011 appearance in the short "Wonderchild." Before appearing on the Nickelodeon series, he credits included minor appearances in "Big Fat Liar," "Little Dreams," "The Honor System" and "Solid Gold." Outside of acting, Swann pursued a career as an underwater photographer and opened a studio called Swann Dive Photography.

Serratos played Susie Crabgrass, one of the most popular girls in school, who became Ned's girlfriend in Season 3. Before her debut on the show, Serratos made minor appearances on "Zoey 101," "7th Heaven" and "Hannah Montana."

Serratos has gone on to appear in the "Twilight" franchise as Angela, played Raven in "The Secret Life of the American Teenager" and currently stars as Rosita on "The Walking Dead." She also appeared in The Black Key's music video for "Howlin' For You."

Perhaps one of the most unusual characters at James K. Polk Middle School is "Coconut Head," played by Pinkston. Receiving the nickname due to his distinctive hairstyle, "Coconut Head" was a very cheerful companion to Ned and his friends and was a fan of the band Nirvana. Before his role on "Ned's Declassified," Pinkston appeared in "The Honor System," "Undercover Kids" and "The Sasquatch Gang." He also provided the voice of Todd Maplewood in "Ben 10."

Since "Ned's Declassified," Pinkston has appeared in "Extreme Movie" and shorts "A Death in Vegas" and "Hero Sandwich." He's also helped prank various fellow celebrities on "Punk'd" and starred as Rob in "This Just In." He also pursued a film degree at the Art Center College of Design and currently has a successful career as a DJ.

Black played Seth Powers, one of the coolest (yet also, the dumbest) guys at James K. Polk. An avid basketball fan, Powers was extremely dimwitted when it came to academics. Before "Ned's Declassified," Black got his start as Patrick Cassidy in "The David Cassidy Story" in 2000 and went on to star in "Bubble Boy" and "13 Going On 30." He also made appearances on "Charmed," "ER" and "CSI: Miami."

Since "Ned's Declassified," Black has only made one appearance in 2008 in the film "Generation Gap." In the Hallmark movie, he played Dylan who was expelled from school and forced to stay with his stern and estranged grandfather. Although the two had a rough first start, their relationship began to grow and they both "give each other some much needed lessons in love."

Marissa "Missy Meany" Johnson, played by Casey, was introduced in season two as an egotistical cheerleader with an obsessive crush on Ned. Using her uptight personality to intimidate her classmates, the only person she truly feared was Moze. Before "Ned's Declassified," Casey appeared on "8 Simple Rules."

Casey went on to appear as Mercedes Griffin on "Big Time Rush." She also made appearances on "House," "ER," "New Girl" and "Murder in the First." She played Margot in the 2017 series "Are You There God, It's Me Margot" and is currently set to star in "Young Lion of the West."

Machado appeared in season three as foreign-exchange student Faymen Phorchin who became Moze's boyfriend until she began to develop feelings for Ned. Realizing their relationship lacked spark, Faymen decided to return to Brazil to play soccer professionally. Machado had previously appeared in "Barney: The Land of Make Believe," "Confessions of a Thug" and "The Shield."

Machado has gone on to make appearances on "Lincoln Heights," "Flashforward," "Southland" and "NCIS." He has also provided the voice of Julian Marino for the videogame "L.A. Noire." In 2014, he played Nomar Arcielo in "Power" and in 2015, he starred as Tony Chessani in "True Detective." He's set to appear in two future mini-series, one called "The Wright" which is currently filming and "Proconsul" which is in pre-production.

Gordon "Gordy" Davenport, played by Norris, was the friendly but somewhat lazy janitor at James K. Polk Middle School. Good friends with Ned, he was always willing to lend a hand. Before appearing on "Ned's Declassified," Norris lent his voice to various television series including "Black Jack," "Cowboy Bebop" and "Transformers: Robots in Disguise."

Norris has continued to do voiceover work over the years, lending his vocal talents to "Codename: Kids Next Door," "The Spectacular Spider-Man" and "The Marvelous Misadventures of Flapjack." He also appeared as Timmy's Dad in the live-action film "A Fairly Odd Movie: Grow Up Timmy Turner!" and Buddha Bob in "Big Time Rush." Outside of voicework, Norris has had roles on "Veronica Mars" and "iZombie."

Before playing science teacher Mr. Sweeney, Creech made his debut in 1994 in "Leon: The Proffessional" and went on to appear on "Law & Order" and "CSI: Miami." He also had roles in "The Curse," "Ultrachrist!" and "The Island."

Since his time on "Ned's Declassified," Creech appeared in "The Curious Case of Benjamin Button" and "X-Men: First Class." He has also lent his voice to the video-games "Red Dead Redemption," "L.A. Noire" and "Grand Theft Auto V." He has also starred on "Brooklyn Nine-Nine" and "Ray Donovan."

Vice Principal Harvey Crubbs, played by Mitchell, took his job a bit too seriously and was constantly afraid of getting in trouble with the superintendent. Before "Ned's Declassified," Mitchell appeared on "Caddyshack," "ER," "The O.C." and "House."

Mitchell has continued to appear in numerous television shows over the years including "Cold Case," "The Suite Life on Deck," "Big Time Rush" and "Parks and Recreation." In 2017, he starred as Dad on "Worst Birthday Ever" and appeared as the News Reporter on "Superstore."

As the wood-shop teacher Dusty Chopsaw, played by Florek, was Moze's mentor who took great pride her in work. Before appearing on "Ned's Declassified," Florek starred on "The Equalizer," "Macgyver" and "The Fresh Prince of Bel-Air."