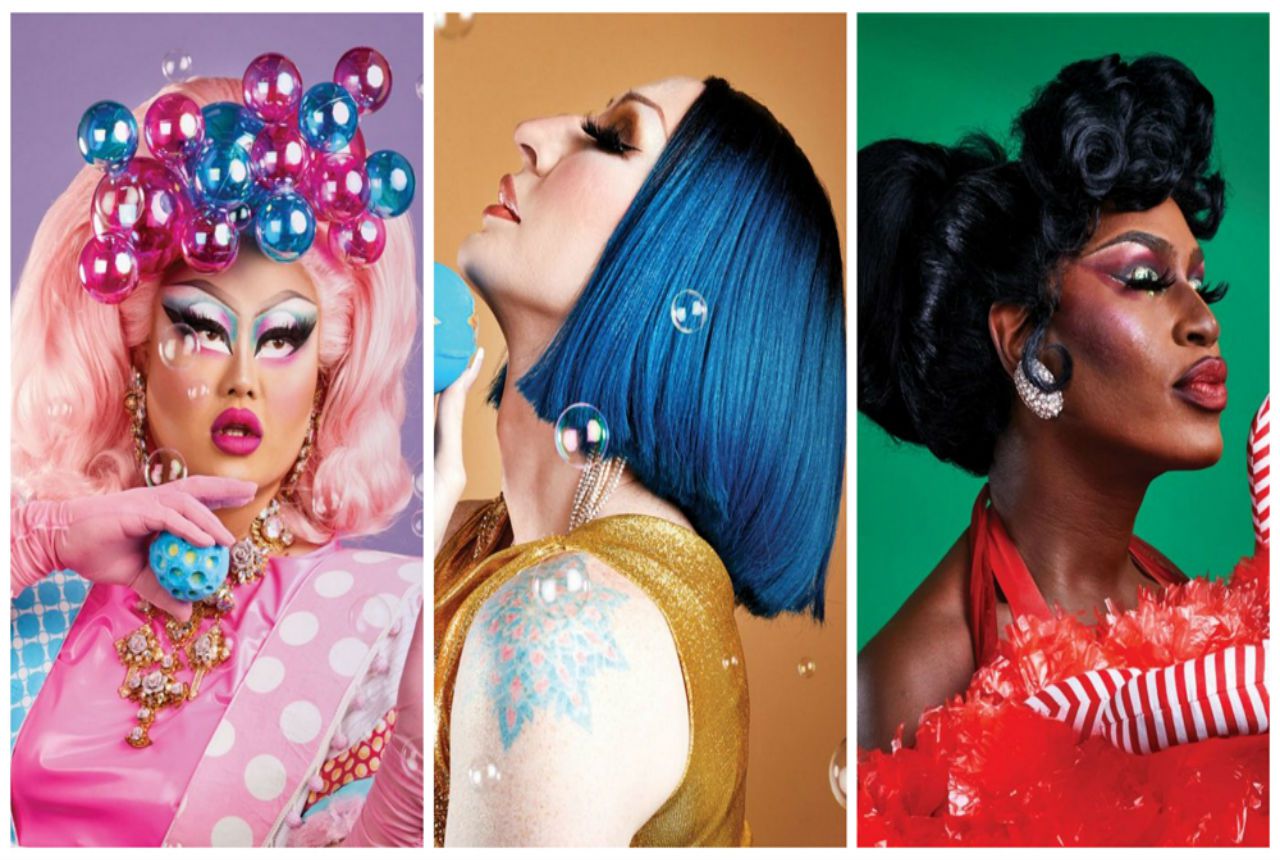 All RuPaul’s Drag Race winners are fierce AF. But the list of sickening, gagging-to-the-gods bitches who didn't win is as long as the wait between seasons. So we picked the 25 crownless queens most overflowing with charisma, uniqueness, nerve and talent...

The bald beauty from Puerto Rico, Miss Nina Flowers still stands out after a decade away from our TV screens. She was the first truly alternative queen. She slayed on the runway and captivated us in the challenges. She won the miss congeniality award, but many (including us) think she deserved to walk away with the crown.

[dx_custom_adunit desktop_id="RTK_K67O" mobile_id="RTK_5yk0"] Tatianna in season two was fine. Pretty, bitchy, but not much else. The Tatianna of "All Stars 2," though was a breakout star and would have been a worthy winner. In "Drag Race," there are always "choices," as Tati would say. But as anyone who has seen her spoken-word poetry masterpiece "Same Parts" knows, this bitch is a winner, baby.

Raven is a goddess. A double loser and double runner-up, she's also the strongest overall queen not to hold a "Drag Race" crown. Raven has everything from the look to the personality to the performances. Let the music play, but it’s a torch song, because Raven has been robbed.

The only queen to have ever lost threetimes, Shangela has come a long way from season two. Her dominant performance in "All Stars 3" should have resulted in the crown, and her elimination in that season remains the biggest "Drag Race" injustice of all time. Shangy won "All Stars 3." Sorry, Trixie, but she did.

[dx_custom_adunit desktop_id="RTK_K67O" mobile_id="RTK_5yk0"] Raja was so dominant in her season that it was tough for anyone else to seem like a credible threat. That is, until Manila gained steam in the back half of the season and almost snatched that crown. Anyone who doubts this rubber-faced vixen should watch her gold-standard "shantay, you stay" lip sync that made Delta Work sashay away.

Latrice is the miss congeniality of misses congeniality. On a list of beloved queens, there's no other lady that elicits the type of across-the-board love as Latrice. She also gave us words to live by: "I want people to realize that it’s OK to make mistakes, it’s OK to fall down, get up, look sickening, and make them eat it."

Willam remains the only queen to be disqualified for breaking the rules. That in itself makes her a winner in our book. But she also deserves a crown for just how entertaining she was on her season. And all that's not to mention her brilliant post-"Drag Race" career, especially "Chow Down (at Chick-fil-A)" with the incomparable Detox.

[dx_custom_adunit desktop_id="RTK_K67O" mobile_id="RTK_5yk0"] Detox stands alongside Raven as the strongest all-around queen never to have won. Detox can serve looks, comedy and brilliant asides without skipping a beat. Her rap in "Read U, Wrote U" from "All Stars 2" is an all-time "Drag Race" high. She might not have won either of her seasons, but she is absolutely a queen among queens.

Season five just keeps on giving. In possibly the strongest season, Alyssa stands out from the pack with her incredible faces, dancing, endless catchphrases and killer reads. Alyssa is arguably the biggest star to come out of "Drag Race," and that's because she's brilliant every moment she's on-screen. There's no one else as effortlessly good.

This talented queen is the definition of "party." A runner-up on her season, Adore left "All Stars 2" of her own volition, though due at least in part to Michelle Visage's (arguably) unfair critiques. It's a shame, because as one of the most gag-worthy queens around, she had a real shot at winning "All Stars 2." No matter. Adore will always be one of the fiercest ever.

[dx_custom_adunit desktop_id="RTK_K67O" mobile_id="RTK_5yk0"] Though talented, funny and fishy AF, Courtney wasn't the fan favorite of her season. But we have to talk about her win on a much different reality show: "Celebrity Big Brother U.K." She won hearts and minds. She educated the children and the straights on drag culture, gender and sexuality. She's more than deserving of that crown, and could be a future "All Stars" hall of famer.

Ben has to be included because she's a fan favorite. But a large contingent of "Drag Race" fans blame her for ruining an already lackluster "All Stars 3." When she left, neck-and-neck with Shangela, it stopped the season dead in its tracks. She could've had a crown if she wanted, but she quit. That said, she's incredible from top-to-bottom, serving humor and character in spades.

Pearl had one of the best story arcs of any "Drag Race" queen. She went from wooden caterpillar to out-of-her-shell butterfly. For attempting to read RuPaul and her epic staredown with Mother, she deserves inclusion on this list. Also, she is the hottest guy out of drag ever on the show. And you if queens get points for being fishy, Pearl gets points for being fine as hell.

[dx_custom_adunit desktop_id="RTK_K67O" mobile_id="RTK_5yk0"] Katya is the best. Period. Her personality. Her humor. The character. To paraphrase Alexis Michelle: No one does Katya like Katya. With Trixie, she broke out into superstardom on YouTube with "UNHhhh." Despite some recent personal troubles, she will always be that queen we'd all watch do anything. Legendary, not legs and dairy.

Can anyone serve mind-blowing looks like Kim Chi? The answer's nope. She's painfully lovely, and could've snatched the crown from season eight favorite Bob. She's the ultimate Instagram queen, but she's broken out through the sheer force of her lovability. Kim Chi doesn’t need a crown to be the most distinctive and influential queen out there.

Legs for days. Naomi is beautiful and delivers high fashion effortlessly. I'm in awe of everything about Naomi’s look, always. But Naomi is more than looks, and was a constantly enjoyable presence during her season. She's had some questionable moments on Twitter. But that aside, she's one of the best young queens.

[dx_custom_adunit desktop_id="RTK_K67O" mobile_id="RTK_5yk0"] Everyone loves an underdog. And the self-styled "cheap queen" captured our hearts in season eight through the sheer force of her personality. Chi Chi is a total lip-sync assassin. And despite a lackluster appearance on "All Stars 3," she is just the type of queen "Drag Race" serves so well. She may not be the most polished, but she is an absolute gem.

Bear with me. We know Thorgy gets on a lot of people’s nerves. And we're never going to defend white people who appropriate dreads. But Thorgy is talented, funny, a hard worker and amazing in so many respects. Woo! If she could only get out of her own head, she'd for sure sashay away with the crown.

Peppermint is one of those queens you love from the moment you first see her. She's so talented, and a lip-sync assassin. But what elevates her above the crowd is her hall-of-fame personality. One of the most deserving misses congeniality, she had a real shot at claiming the season nine crown. And as a transgender woman, she's shown incredible grace and poise during her public transition.

[dx_custom_adunit desktop_id="RTK_K67O" mobile_id="RTK_5yk0"] The front-runner for most of season nine, it's heartbreaking Shea didn’t win. She's the definition of an all-arounder. While a lot of the other queens are on this list because they stand out in one area, Shea is here because she kills it in every category: her performances, her looks, her cutaways, her personality, her wit. There's no area in which she scores less than a 10.

Trinity "The Tuck" Taylor defied all expectations. She succeeded where other "bitchy pageant queens" failed. Her shade was rooted in authenticity, never insecurity. She adapted her pageant experience to the metrics of "Drag Race." And she became a fan favorite in the process, surprising even Trinity herself. She never tried to change who she was. And that's why we love her.

Real talk: She does look like Linda Evangelista! Valentina gave us the most shocking elimination in "Drag Race" herstory. Her looks are amazing and she knows how to work a camera. There seems to be a lot of hate for Valentina among some of the other queens and among the show's fans. But Valetina's a winner regardless of her placement on the stacked ninth season.

[dx_custom_adunit desktop_id="RTK_K67O" mobile_id="RTK_5yk0"] Season nine had one of the deepest lineups of the show's entire run, so you might be surprised to see Farrah on this list. But if you're a Farrah believer, you know she's more than worthy. Especially after she really came back with a vengeance during the season nine reunion. And that one compilation of Farrah Moan moaning should prove she deserves a crown.

Aja's the Brooklyn queen to beat all Brooklyn queens. Her reading Valentina on "Untucked" is the greatest moment in "Drag Race" herstory. If you weren’t a convert after season nine, you sure as hell were after "All Stars 3." Totally let down by a guilty BenDeLaCreme, Aja was robbed of her more-than-earned chance to return to the "All Stars" race in favor of the lackluster Morgan.

Miss Vanjie… Miss Vanjie… Miss Vanjie! We don't know if anything will ever top Vanjie’s first-boot exit. With her single episode, we can justify her being on the same list as the other queens we named. Never has anyone made more of a splash in a "Drag Race" season premiere. Some queens are forgettable after 10 episodes. Vanjie made herself an icon with just one.