Where Are They Now? The Cast Of ‘Hannah Montana’ 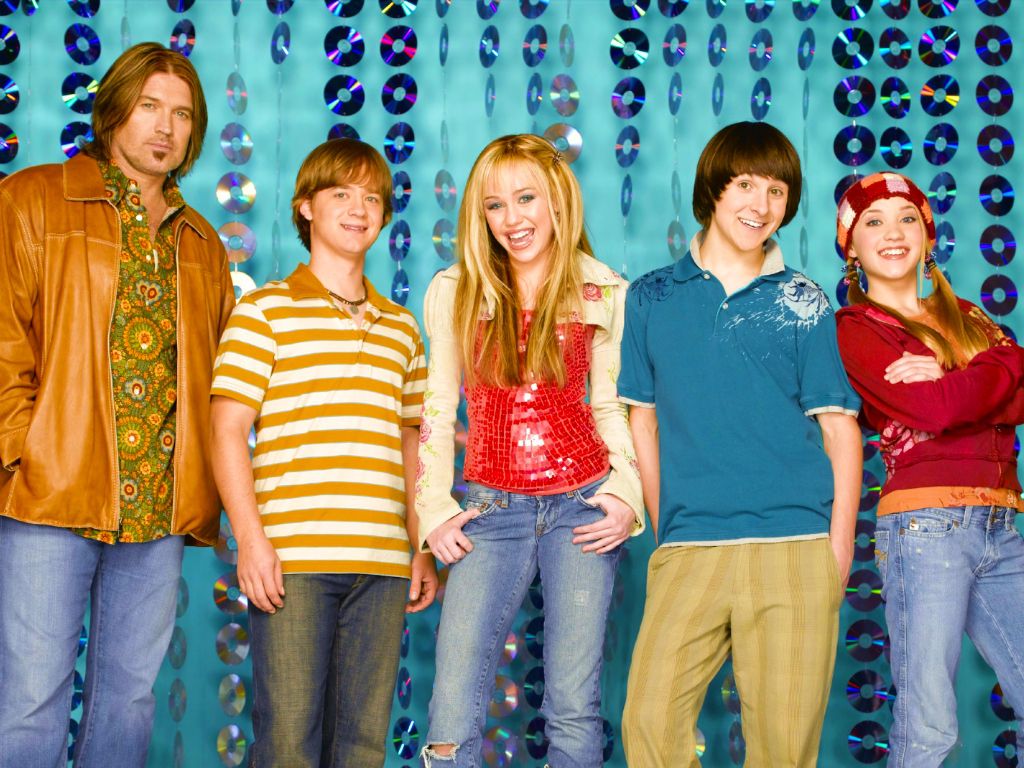 Unless you're born into a family of A-listers, succeeding in the entertainment industry is a near-impossible mountain to summit. Every  celebrity has to start somewhere and for Miley Cyrus, that origin point dates back to her Disney Channel days. Transitioning from the lead of "Hannah Montana" to soon become a pop icon, Cyrus is undeniably the series' breakout star. In addition to one-hit-wonder country star Billy Ray Cyrus, the cast of "Hannah Montana" counted numerous other B-list celebs in its ranks. Curious what series regulars like the seemingly ageless Jason Earles and one-time heartthrob Mitchel Musso are up to now? Peep this collection of "Hannah Montana" updates to see what your favorite former tween stars are up to day. I'm warning you though, present-day Moises Arias (aka Rico Suave) will creep you TF out.

Back in 2009, Billy Ray Cyrus kept busy by serving up some serious frosted highlights while acting as Hannah Montana's on-screen dad. Playing a role suspiciously close to his real life, (former country singer who is now the father of a pop star) Cyrus was clearly angling to exit the abyss of pop culture obscurity.

Now, Cyrus is doing the most to jump start his music career. According to his website, the country star is currently working on some new music while performing a steady number of low-profile gigs. He made a great comeback thanks to his appearance on Lil Nas X's "Old Town Road." Thankfully, Cyrus will always have his longest running role to date as Hannah Montana's dad IRL.

Back in the early aughts, actor Jason Earles defied both time and logic by playing Hannah Montana's 16-year-old brother. When the series first began filming, Earles was actually a 30-year-old fully grown man IRL masquerading as a teenager with cringe-worthy catchprases like "I said good day!"

Unsurprisingly, Earles still looks young AF despite the fact that he's a 41-year-old man. After "Hannah Montana" wrapped for good, Earles unsuccesfully attempted to stay in the spotlight with a series of Disney Channel cameos and straight-to-TV movies. While things may not have gone to plan professionally, Earles still managed to snag himself a smokin' hot wife.

During his reign as a series regular on "Hannah Montana," Mitchel Musso took his Bieber hair/bangs super seriously. Totally milking his status as a Disney heartthrob alongside other tween stars like the Jonas Brothers, Musso was as deep into his Mickey-eared contract as a child star could go. While starring in several Disney Channel Original movies, Musso also served as the host of the television series "PrankStars."

Sadly, Musso was never able to maintain the level of fame he enjoyed during his "Hannah Montana" days. A major "no-no" for any Disney Channel star, Musso was caught driving drunk and slapped with a career-damaging DUI charge. Unsurprinsgly, Musso was then dropped from the network all together.

Starring as Hannah Montana's on-again, off-again boyfriend for years of the series' reign on The Disney Channel, I'll admit I was super mad when Cody Linley's character Jake Ryan cheated on the undercover pop star. With sandy blonde hair and a megawatt smile, it's no surprise that Linley was the subject of MANY schoolgirl crushes during his days of tween stardom.

Post "Hannah Montana," Linley made the semi-successful transition to landing film roles and even scored a spot on "Dancing With The Stars." While he's definitely not starring in any Hollywood blockbusters, Linley has notably acted in two installments of the "Sharknado" franchise. Hey, there's nothing wrong with being a B-list celebrity, right?

Back in the day, Drew Roy lit up screens as Jesse, another one of Hannah Montana's love interests. With eyebrows on fleek and a brooding stare, Roy had all the makings of a tween star ready to break out into the ranks of adult Hollywood A-listers.

After his on-screen love story with Hannah Montana didn't pan out, Roy went on to star in the sci-fi series "Falling Skies." Thankfully for Roy, the series ran from 2011 - 2015 and earned the actor a dedicated fanbase. Most recently, Roy snagged a small role in the Lifetime movie "Blood, Sweat, And Lies."

Anna Maria Perez de Tagle played one half of the mean girl duo Amber and Ashley. Her character, Ashley, had fewer storylines on the show, but de Tagle continued to get other roles on Disney Channel, like a memorable spot in the cast of “Camp Rock” and its sequel.

In 2019, de Tagle married her longtime boyfriend Scott Kline Jr. in a beautiful ceremony. Her maid of honor was “Orange is the New Black” star Uzo Aduba. She also continues to act and sing and she recently appeared on Broadway in the show “Godspell.” She also had an appearance on the reboot of the show “Charmed.”

Selena Gomez played Mikayla, a rival pop star to Hannah Montana. She appeared on only two episodes of the show before her own Disney Channel series “Wizards of Waverly Place” premiered in 2007, making her role as Miley’s rival a little closer to fact.

Since her Disney Channel days have ended, Selena has moved on to bigger and better things in the entertainment industry. She has released five studio albums, stared in several major box office draws and recently added producer to her list of titles with the Netflix series “13 Reasons Why.”

Fresh off a long run on the soap opera “The Young and the Restless,” Tammin Sursok played Jackson’s long-term girlfriend in the final season of “Hannah Montana.” You might also recognize her from her role in Nickelodeon’s movie “Spectacular,” which aired in 2009.

The same year that Tammin scored a role on “Hannah Montana,” she scored another great role on “Pretty Little Liars” as Jenna Marshall, the vindictive blind girl. She appeared on that show from 2010 through 2017 and then slowed her career down a bit to focus on raising her two daughters with husband Sean McEwen.

With his appearance in “The Hannah Montana Movie” as small-town cowboy Travis Brody, Lucas Till stole the hearts of every theatre goer and earned nominations for two Teen Choice Awards. He also had a role alongside another iconic pop star, playing the love interest in Taylor Swift’s music video for “You Belong with Me.”

Till has continued to wow audiences on the big screen in the past few years, with roles like Havok in the “X-Men” series of films. He currently plays MacGyver in the reboot of the classic ‘80s show, and it is now in its fourth season.

Dolly Parton has had major star power for decades and her role on “Hannah Montana” was based in more fact than fiction. Parton is Miley Cyrus’s real life godmother. She has known Cyrus’ father Billy Ray since the early ‘90s when he first shot to fame with his hit single “Achy Breaky Heart.”

Dolly and her goddaughter Miley have always stayed close and the two continue to perform together from time to time. Most recently, they sang some of Parton’s hits like “Jolene” during a tribute to the country singer/songwriter at the 2019 Grammy Awards.

When she was just a tot, Noah Cyrus, the younger sister of Miley Cyrus got her first taste of showbusiness during a series of cameo apperances during the show's 2006 - 2010 run. While she didn't ever have a regular character, Noah Cyrus was certainly a staple of the series via a steady stream of unnamed roles.

To date, Noah Cyrus seems to be following in her big sister's footsteps. Dabbling into producing trap pop bangers herself, Cyrus has released successful tracks like "Stay Together" and "Make Me (Cry)." Her much-anticipated debut album is also set to drop some time in 2020.

During her "Hannah Montana" days, actress Emily Osment played the role of Cyrus' on-screen BFF Lily Truscott. During her time as a certified tween star, Osment also acted in straight-to-TV movies like the Disney Channel film "Dadnapped" and the ABC Family film "Cyberbully." Flexing her singing skills, Osment also recorded tracks for the soundtracks of her Disney projects.

Emily Osment has aged just like wine and is now fine AF. While she definitely doesn't enjoy the same fame as her former co-star Miley Cyrus, Osment has stayed active in the industry via several indie productions. Most notably, she starred in Freeform's "Young And Hungry" from 2014-2018.

After winning viewer's hearts over with his big eyes, comedic delivery and crooked teeth, Moises Arias earned himself a regular role on "Hannah Montana" as Rico Suave. As the longstanding foe of Jason Earles' Jackson Stewart, Arias' one-liners are the stuff of Disney Channel child star legend.

Unlike Emily Osment, Moises Arias has not aged very well. I don't know if it's the dreads or the steady stream of strange Instagram content, but Arias admittedly creeps me TF out. Despite his striking change in appearance, Arias is now a successful photographer featured in top name publications.

Before "Hannah Montana," Miley Cyrus was just the relatively uknown daughter of "Achy Breaky Heart" hitmaker Billy Ray Cyrus. However, thanks to her blonde wig and "sweet niblets" catchphrase, Cyrus became a certified child star thanks to the instant success of "Hannah Montana."

To date, Miley Cyrus has more than proven her staying power in the entertainment industry. From securing a coaching gig on the mega-popular reality series "The Voice" to releasing hit solo albums like "Bangerz" and "Younger Now," Cyrus' status as a multi-hyphenate entertainer isn't going anywhere anytime soon.

If you thought that Miley Cyrus would maintain her squeaky clean "Hannah Montana" image forever, think again. Desperate to show the world that she was all grown up and ready to twerk, Cyrus delivered an insanely controversial performance alongside Robin Thicke at the 2013 MTV Video Music Awards.

But in 2019, Cyrus took to Instagram to revisit her Disney character with a throwback haircut: Hannah's signature blonde bangs. While she had this 'do, Cyrus posted a few stories of herself singing along to 'Hannah'-era classics like "Best of Both Worlds," making us all relive our tween years.