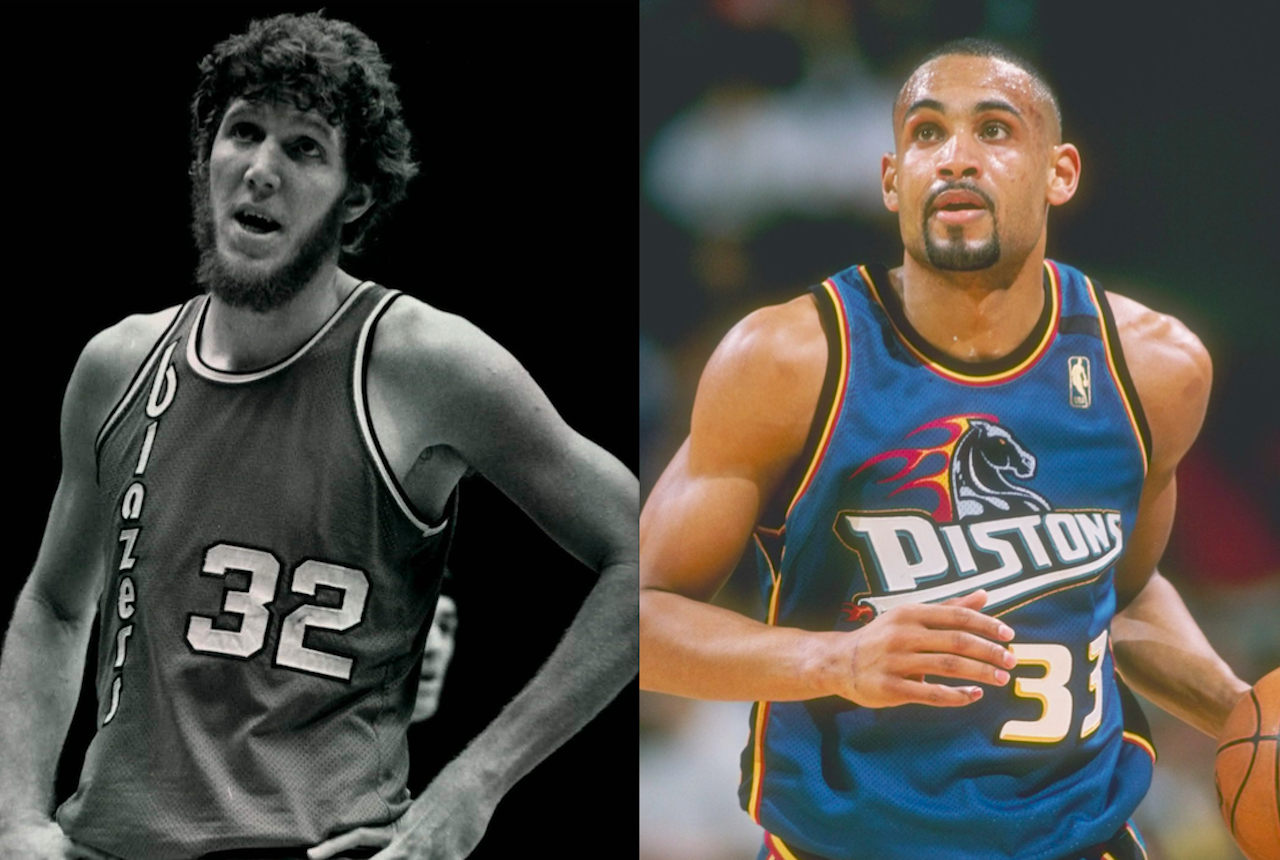 Turns out being a living giant is bad for your health. And making matters worse for NBA players: smashing those massive bodies into each other repeatedly. Oh, and changing directions at full speed. And leaping as high as one can before landing on hardwood floors. Far too often, these physical requirements of basketball have cost great players the careers they'd once seemed destined for, and have cost fans the chance to watch those players meet their potential. But if you don't believe it, just ask Yao Ming. Or Andrew Bynum. Or just about anyone drafted by the Trail Blazers. Find those guys and more on our list of the greatest NBA careers derailed by injury, in no particular order.

The center's Hall of Fame career was ravaged by knee injures. At one point he sat out three seasons in a four-year span, playing just 14 games in the lone year he made it onto the court. The 1977 NBA Finals MVP and 1978 NBA MVP played just 468 regular season games.

[dx_custom_adunit desktop_id="RTK_K67O" mobile_id="RTK_5yk0"] Grandmama was an immediate beast in the NBA, averaging 19.2 points, 11 rebounds, and 3.6 assists as a rookie and maintaining that production through his first five seasons. But as his back got worse, the power forward moved farther from the basket, limiting his production as he moved to small forward with age. He retired at 32 after just 10 seasons.

After his first three seasons, Arenas enjoyed a blistering three-year peak in which he averaged 27.7 points, 5.7 assists, 1.9 steals, and 2.6 threes per game while connecting from deep at a 36.1 percent clip. But with eight games remaining in 2006-07, he tore his MCL at the age of 25. After that, Agent 0 played in just 134 more NBA games, over a span of five seasons.

The small forward filled it up out of the gate in his NBA career, averaging 21.8 points per game through his first three seasons before a knee injury limited him to just 18 games in 1995-96, his third year in the league. Monster Mash played in just 141 games over the following three seasons before regaining his form: Over the last five seasons of his career, Mashburn averaged 20.1 points, 6.2 rebounds, and 4.7 assists per game, but knee injuries guided him into retirement. He played his last game at age 32.

[dx_custom_adunit desktop_id="RTK_K67O" mobile_id="RTK_5yk0"] The center earned five All-Star nods in just eight NBA seasons, leading the Cavaliers to the Eastern Conference finals in 1992, where his team lost to Michael Jordan's Bulls in six games. Due to recurring back problems, the former No. 1 overall pick didn't play past age 28. He retired with career averages of 19 points, 9.5 rebounds, and 3.7 assists.

One of the greatest college basketball players ever became a dynamic two-way power forward in the league, enjoying a three-year peak in which he averaged 20.9 points, 6.8 rebounds, 3.3 assists, 1.5 steals, and 1.3 blocks per game starting in 1991-92, his fourth NBA season. All that after undergoing arthroscopic knee surgery as a rookie. He stuck in the league until age 36, but more knee issues severely limited him. He's the first player in NBA history to play after undergoing reconstructive surgery on each knee.

The big man was an immediate force, posting averages of 20.7 points, 10.8 rebounds, 2.8 assists, and 2 blocks per game over his first three seasons, which culminated in a Rockets run to the NBA Finals in 1986. He missed just three regular season games in those first three years. But knee and back injuries limited him to just 213 games over the next six seasons. His last game came at age 31.

[dx_custom_adunit desktop_id="RTK_K67O" mobile_id="RTK_5yk0"] There was little the 6'8" wing couldn't do on the court, aside from make it out of the first round of the playoffs: The two-time scoring champ also had career highs of 1.9 blocks, 7.9 rebounds, 6.5 assists, and 1.7 steals. But knee and back injuries limited his explosiveness, and after age 25 he played more than 52 games in a season just three times.

D-Rose is still playing when he's healthy enough and he feels like it. In the 2012 playoffs, a season after claiming the 2011 NBA MVP award, Rose tore his ACL, stripping him of the elite explosiveness that made him an excellent penetrator. He sat out the following season and hasn't been all that productive since.

Despite being just 6'7", Stokes led the NBA in rebounding as a rookie, pulling down 16.3 boards per game to go with 16.8 points and 4.9 assists. He maintained that level of production until hitting his head during a fall in his third season. Days later he fell into a coma. Stokes was diagnosed with post-traumatic encephalopathy, which left him paralyzed. No one had more rebounds over the course of his three seasons, and he had the second-most assists in that span, behind Bob Cousy.

Best remembered as the guy drafted ahead of Michael Jordan, Bowie was selected second overall for a reason, having dominated on both ends of the floor during his time at the University of Kentucky. But persistent injuries to his lower body regularly kept him off the floor and limited his effectiveness. He played 511 NBA games over 11 seasons.

The Duke product had an incandescent first six seasons, averaging 21.6 points, 7.9 rebounds, 6.3 assists, and 1.6 steals per game. But ankle injuries limited him to just 135 games across the next six seasons. He remade himself into a valuable role player in his 30s, but never approached the elite star he'd been in his youth.

Yao played in 244 of a possible 246 games through the first three seasons of his career. Then the wheels came off. Over the next six years, the Hall of Fame center played just 242 games due to injuries to his left foot and right knee. During a three-year peak, Yao averaged 23 points, 10.2 rebounds, and 1.9 blocks per game.

By his third season, Roy was one of the game's best shooting guards, averaging 22.6 efficienct points and 5.1 assists per game. He tore the meniscus in his right knee in April 2010, but returned for the playoffs. However, his knee got worse the following season, limiting him to 47 contests. He retired, then made a five-game comeback in 2012-13.

[dx_custom_adunit desktop_id="RTK_K67O" mobile_id="RTK_5yk0"] The 6'7" guard devastated the league through his first four seasons, averaging 19.7 points, 6.7 assists, and 1.9 steals per game. But a knee injury and surgery limited him to just 19 games in 1997-98. Lacking his former explosion, Hardaway transitioned into a role player in his remaining years.

C-Webb was spectacular when he played, posting career averages of 20.7 points, 9.8 rebounds, 4.2 assists, 1.4 steals, and 1.4 blocks per game. But in 2003, an injured knee required microfracture surgery. He was still a productive player when he returned, but nowhere near the agile world-beater he'd been in his younger days.

Pistol Pete led the NBA in scoring in 1976-77, but perhaps his most impressive feat came a season later. Injuries to both knees severely limited his athleticism, yet the shooting guard still managed to score 27 points per game game and dole out 6.7 assists. After that season, he played just 92 games over two more years before retiring.

[dx_custom_adunit desktop_id="RTK_K67O" mobile_id="RTK_5yk0"] The first four years of O'Neal's career were mostly spent watching from the bench, which is a shame because injuries cut him down not too long after he broke into stardom for the Pacers. During his five-year peak, the big man averaged 20.7 points, 9.7 rebounds, and 2.4 blocks per game. But injuries started to take their toll, and O'Neal played in just 328 games over his last seven seasons.