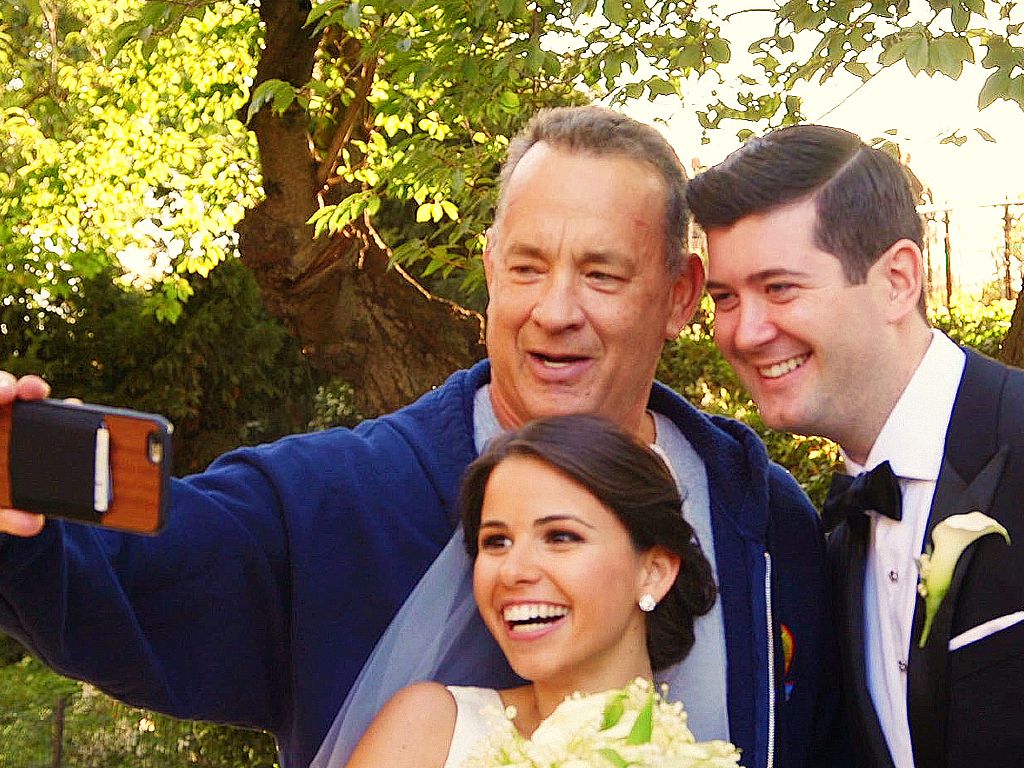 Celebrities are known for their love-hate relationship with cameras. If it's not the paparazzi hounding them for pictures, it's eager fans pleading for a selfie. Sometimes, a celebrity's encounter with the camera is purely accidental, which caused some of the hilarious and heart-warming moments below.

The Tenacious D singer and "Jumanji" actor recreated the infamous "Distracted Boyfriend" meme by accidentally crossing paths with this couple on his way to grab a bite in Atlanta. The incident quickly made the rounds on Reddit and Imgur when a clip of the interaction was uploaded to Black's YouTube channel JablinksiGames where it received over 4.7 million views.

Proving innocent pranks have no age limit, Queen Elizabeth snuck herself into a selfie captured by Australian hockey player Jayde Taylor while she posed alongside best friend Brooke Peris. Taylor tweeted (@_JaydeTaylor) the photo along with a caption showing her surprise over the royal ruse. Despite not being a fan of the social media trend, the Queen was captured again appearing in a selfie taken by Allan Branford in 2018 while attending the Newbury Racecourse.

"ANTM" model Winnie Harlow became the target of some royal hijinks when she was photobombed by Prince Harry during a match at the Coworth Park Polo Club. Harlow posted the picture on her Instagram (@winnieharlow) along with a shot of Harry's brother William and called the sneaky snapshot a "really cool" experience.

The Terminator himself couldn't resist the lure of a camera when he rode his bike toward a group of Thai tourists posing in front of the Eiffel Tower in Paris, France. Wearing dark glasses and a camouflage jacket, the actor and politician went unrecognized by the tourists until their guide began shouting "Arnold" as he rode off. On his Instagram (@schwarzenegger), he thanked the group for "letting me crash your photo!"

The comedic actor known for his roles on "Scrubs" and "Alex, Inc" surprised German newlyweds by appearing in one of their wedding photos in New York. Posing in front of a busy street in Times Square, the couple was oblivious to Braff walking by and only noticed the actor after their photographer confirmed his appearance by reaching out on Twitter. Calling the experience "one of my best photobombs ever," the actor certainly made a lasting impression on the couple's special day.

The "Castaway" actor couldn't resist being a part of this happy couple's photoshoot when he stumbled upon them while running in Central Park. Offering his well wishes, Hanks was then invited to pose with the newlyweds and he even took a few selfies with them.

During "Good Morning America," the singer photobombed the "Full House" trio while they took a selfie. Sneaking up behind John Stamos and Dave Couiler, Rihanna pulled a "DOUBLE BUNNY EARS" while Bob Saget took the picture. The image was uploaded onto GMA's Twitter and received almost 300 likes.

It appears celebrities love surprising couples when they least expect it. The comedian found himself captured in the middle of this Ohio couple's engagement photos taken at a local brewery. The photographer uploaded the images onto her Facebook (@Jaycee Marie Photo + Video) and revealed Chappelle was "so nice and truly made our day."

The "Breaking Bad" star found himself the center of attention after being captured in a couple's selfie at Coachella. Uploaded onto Reddit, the image instantly went viral and users also pointed out "Twilight" actor Kellan Lutz had managed to sneak into the picture, too (upper right corner, wearing a hat and sunglasses).

One photographer tried to get an edge on the former web-crawler and his lady-love by sneaking a selfie but instead captured a goofy display. New York creative director Alejandra Garibay was dining out when she spotted the couple and tried to snap a picture. Aware of her not-so-subtle attempt, Stone feigned surprise while Garfield went for an inquisitive gaze.

"The Wedding Singer" himself stumbled upon this lovely couple in Montreal and was invited to participate in their photoshoot. Groom Kevin Goldstein said the experience "made our photos and wedding that much better" according to the BBC.

Known for his comedic roles in "How I Met Your Mother" and "Forgetting Sarah Marshall," Segel decided he wanted to be the center of attention during this couple's engagement photos. Posing in front of an art museum in Philadelphia, the pair waved to the comedian who slowly began to approach them and said "just keep doing what you're doing, I'll get in a photo with you."

Believing she was "an inebriated tourist" intruding on the couple's special day, photographer Jen Menard was surprised when the bride recognized the star and invited her to join in. The image, captured at Audubon Park in New Orleans, has spread like wildfire on social media and gained 1,600 likes on Instagram.

The "Aquaman" star decided to come on land to photobomb newlyweds who happened to be taking pictures near the beach. Momoa and his family approached the couple "shouting congratulations" according to Dayton Daily News and was asked by the bride to pose for a picture. Momoa happily obliged, even flashing his trusty trident as he walked along the sandy shore behind the couple.

Reddit user PM_Me_Yer_Guitar shared a photo of his brother taken with the legendary "Rocketman" singer Elton John in the background at a ski resort. The user says John "didn't mind" having his photo taken and "kinda nodded" when he noticed the sneaky shot.

British heiress Alice Bamford was attempting to take a cute selfie with her baby while dining in Malibu when she accidentally captured a picture with one of Hollywood's most famous families. Behind her were seated Kim Kardashian and hubby Kanye West along with baby North caught in what was described by Daily Mail as not "quite the picture of domesticated bliss" the celebrity couple appears to be on television.

In 2014, the Canadian pop-star shared an Instagram post that featured him posing next to a sleeping man with the caption "Bae caught me sleeping." The image triggered numerous reactions varying from amusement at his comedic antics to downright anger over his immaturity. Writer Annie Castro’s father was the sleeping man in the photo and she explained her side of the experience by saying “My dad was waiting for his sister at his NYC hotel and dozed off. After waking up and getting in a cab, he started getting texts within minutes from people in Utah who had seen the photo. Oh, the world of social media.”

The comedian caught this lovely couple's attention by "slapping his belly" causing them to laugh during their photoshoot, according to Mashable. After offering his congratulations, Murray was invited to join them for a photo and happily obliged. The "Ghostbusters" star has a habit of making himself the center of attention during other people's private moments. In 2014, he crashed a bachelor party at a steakhouse and delivered some quality advise to the groom-to-be.

The singer and die-hard Ipswich fan decided to demonstrate his feelings toward rival team Norwich City by photobombing the team's ex-players. Sheeran's trolling came in the form of "flipping the bird" and angrily pouting in the background of the group's selfie.

The tennis player made quite the entrance when she stumbled into a beach wedding ceremony in a leopard-print swimsuit and posed with the newlyweds. The encounter happened during Williams' vacation to South Beach with BFF Caroline Wozniacki. She later posted the pictures onto her Instagram (@serenawilliams) with the caption "Wedding Crashers!! Congrats!"

The former NSYNC member crashed this pair's wedding when he decided to introduce himself to the couple and pose for photos. Timberlake was having lunch nearby and when noticing the two having their pictures taken, he went to offer his congratulations. Both surprised and delighted by the encounter, the bride told Entertainment Tonight "it was awesome of him to do that."

The Seventh Wonder of the World couldn't compare to the members of One Direction who were captured in a tourist selfie atop Manchu Picchu. Uploading the picture onto his Instagram (@mrmiatke90), Aaron Miatke commented that he had "ticked off two boyhood dreams" after the encounter.

While golfing at The Lodge at Torrey Pines, the (at-the-time) president decided to say hello to a wedding party that was having a ceremony nearby. The bride, not wanting to miss an opportune moment, ran "down the hall" and immediately "started crying" according to Entertainment Tonight when she encountered Obama who offered the groom an important piece of advice before tying the knot: "not to step on [the bride's] dress."

The Avenger himself decided to swoop in and pose for pictures with newlyweds celebrating at Bryon Bay in Australia. The photographer who captured the moment told Kidspot the actor "is the nicest bloke you could ever meet." However, according to Insider, the bride "was wondering... who this person was" much to the embarrassment of her groom.