Celebrities Twitter Beefs: Which Stars Threw The Most Shade At Each Other On Social Media?

Bridget Daly |March 7, 2018
Celebrities Twitter Beefs: Which Stars Threw The Most Shade At Each Other On Social Media? March 7, 2018 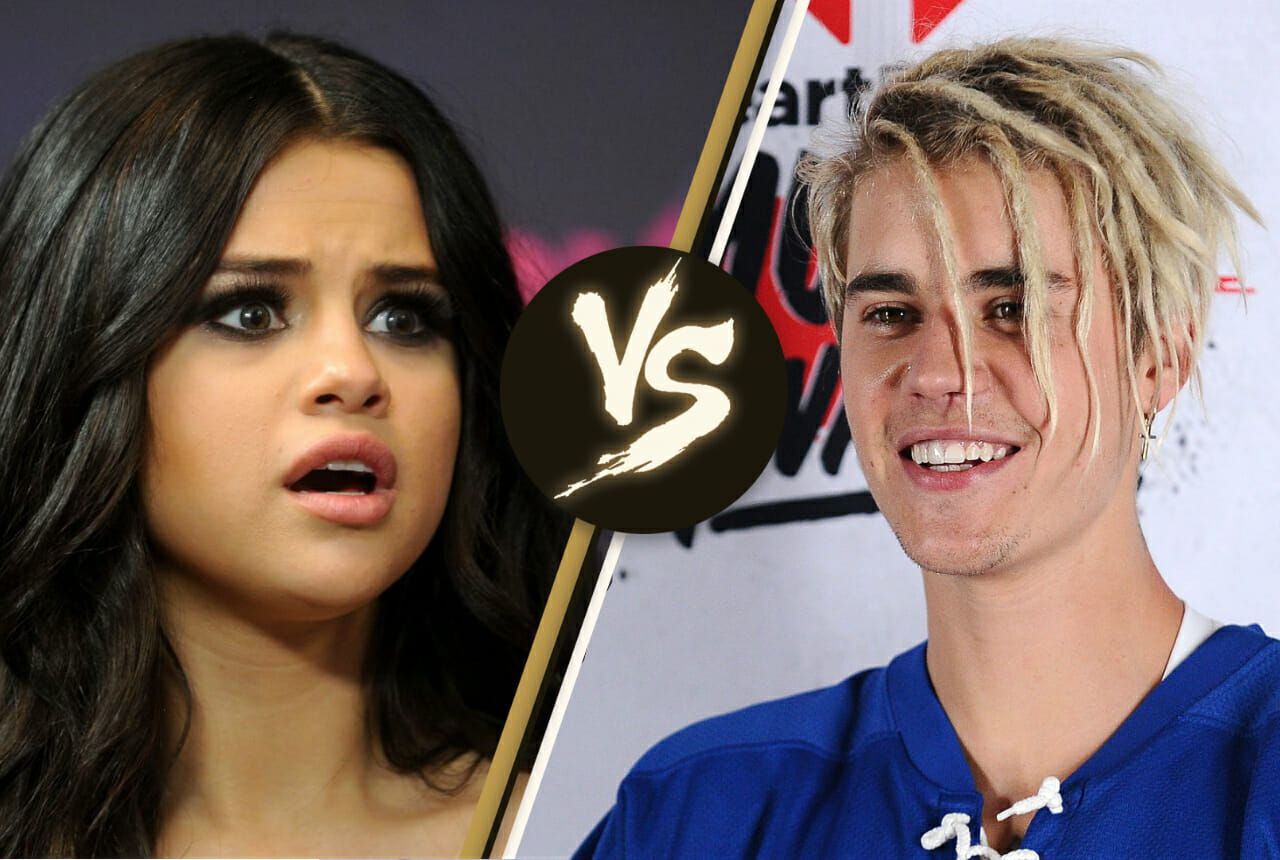 With the popularity of social media, it's no surprise that celebrity beefs are no longer exclusive to tabloids. Putting their famous feuds above PR moves, these celebs threw impulse control out of the window. And instead, they publicly put their industry mates on blast for the benefit of the entire Twitterverse. From Kim Kardashian to Katy Perry, these A-listers chose to air their dirty laundry for the entire world to see. And some had to learn the hard way that screenshots are forever. So here are all the best celebrity feuds on Twitter that had us @ing all of our mutuals.

When pop star Katy Perry was prompted by late-night talk show host James Corden to rank her ex-beaus according to their performance in bed, the Roar singer was quick to rate Diplo as her worst sexual partner. In response, Diplo tweeted "I don't even remember having sex" under a link to the offending news story. Ouch.

Rihanna And All Of Her Exes

Rihanna put all of her exes (looking at you Drake and Chris Brown) on blast with one simple upload to Instagram. "None of my exs are married or in happy relationships so it's safe to say that I wasn't da problem lol," read the text-only image. Washing her hands of her past relationship drama, it's clear that RiRi wasn't afraid of serving up some social media side-eye.

Notorious at the time for her spur-of-the-moment Twitter rants, Amanda Bynes savagely sounded off on Rihanna with a series of racist and extremely offensive tweets. "You look so ugly tryin to be white," she wrote before adding "Chris brown beat you because you're not pretty enough." When RiRi responded with a jab about Bynes needing intervention, the once-celebrated actress continued to hurl insults at the Disturbia singer.

When singer-songwriter Adrienne Bailon aired her grievances with ex-beau Rob Kardashian in the press, Kim Kardashian took to Twitter to stick up for her brother. "Funny how she says being with a Kardashian hurt her career yet the only reason she has this article is bc she is talking about a Kardashian," she wrote. Bailon must have forgotten about the golden rule within the KarJenner empire during her fling with the sole male Kardashian sibling--family over everything.

When comedian Amy Schumer roasted Khloe Kardashian's recent weight loss during her SNL monologue, Koko wasn't shy about stepping up and defending the work she had been putting in at the gym. "No need 2 tear down others just 2 make urself feel bigger," she tweeted. "It actually makes u quite small. I'm on a healthy journey. I don't care 4the hate."

Bette Midler was definitely not a fan of Kim Kardashian's infamous "I have nothing to wear" nude bathroom selfie. "Kim Kardashian tweeted a nude selfie today. If Kim wants us to see a part of her we've never seen, she's gonna have to swallow the camera," Midler tweeted.

Siding with her BFF Blac Chyna, Amber Rose blasted Tyga and Kylie Jenner's then-budding relationship back in 2015 during a radio appearance by slamming the Lip Kit queen's minor status. After Jenner's big sister Khloe Kardashian hopped on Twitter to plead with Rose to keep her family's name out of the press, the activist issued a savage clapback. "Let's talk about Ray J nutting on Kim," tweeted Rose, referencing Kim K's infamous sex tape.

On Instagram, uncle Snoop doesn't play. The veteran rapper hopped on the image-sharing platform to post a side-by-side image comparison of Iggy Azalea and Marlon Wayans' "White Chicks" character, implying that she looked like a man dressed in drag. "So we just gonna ignore that fact that iggy look like marlon from white chicks," wrote the Gin and Juice rapper.

A certified member of Taylor Swift's #GirlSquad, singer-songwriter Lorde was not content with simply sitting idly by while Diplo attacked her BFF. After posting a tongue-in-cheek Fundly link aimed at crowdsourcing butt implants for Swift, Lorde clapped back and attacked record producer's manhood. "Diplo should we do something about your tiny penis while we're at it hm," she tweeted.

Rihanna was NOT here for T-Boz and Chilli of TLC attacking her unique style and penchant for sheer clothing. After T-Boz slammed RiRi during a radio interview and made the sweeping statement that "you don't have to take your clothes off if your music is great," the "Diamonds" singer clapped back with a Twitter post slamming the girl group's fading relevance complete with a reaction image. To top it off, RiRi also changed her Twitter background to an image of TLC posing topless.

Ever-ready with the eye-catching social media uploads, Rob Kardashian took to Instagram to compare his sister Kim Karashian to a psychopathic character from David Fincher's 2014 film "Gone Girl." "This is my sister kim, the **** from Gone Girl..." wrote Kardashian. Not amused by the criticism, Kim K fled to Twitter to offer a rebuttal. "He thinks he's being funny," she said. I got mad at him and he posted that to get me back."

Back when Selena Gomez and Justin Bieber were still in splitsville (the first time), #Jelena shippers responded violently to Bieber hooking up with Sofia Richie. Flooding his Instagram with hateful comments and snake emojis, Bieber threatened to delete his account entirely--and that's when Gomez stepped in. "If you can't handle the hate then stop posting pictures of your girlfriend lol--it should be special between you two only," she commented. "Don't be mad at your fans. They love you. They were there for you before anyone."

Following Taylor Swift and Calvin Harris' nasty 2016 split, the famous DJ unleashed his fury via a string of hateful tweets. After Swift leaked the news that she had written Harris' hit single "This Is What You Came For," the Scottish record producer doubled down and slammed the pop star in a brutal tweet-takedown. "I know you're off tour and you need someone new to try and bury like Katy ETC but I'm not that guy, sorry. I won't allow it," he wrote.

Anne Hathaway And The Kardashians

Actress Anne Hathaway made a serious misstep when she posted a meme on Instagram that read, "In a world of Kardashians Be a Helena Bonham Carter." After Kardashian stans swarmed the comment section and condemned the Oscar-winner for for the shady comparison, Hathaway removed the offending image and instead uploaded text that read, "Post removed for unintended shade thrown."

If there's one thing that everyone knows after Keeping Up With The Kardashians for over a decade, it's that you don't mess with the most close-knit family in Hollywood. After Taylor Swift slammed Kanye West over his "Famous" lyric in which the rapper mentioned the possibilty of the two sworn enemies potentially having sex, Kim K served up some smokin' receipts on Snapchat that proved that the pop star actually approved the controversial bar. Look what you made her do, T-Swift.

Someone needs to school John Mayer on the golden rule of social media--screenshots are forever. In celebration of his ex-girlfriend Taylor Swift's birthday, Mayer tweeted a scathing commentary of the date itself. "Tuesday, December 13 may be the lamest day of the year, conceptually," he wrote.

Bob Saget wasn't just about to let his Full House co-star John Stamos post an Instagram glamor shot and get away with it. After Stamos uploaded a snap of himself riding a majestic white horse into the ocean, Saget piped in that he should "do an Old Spice commercial." Who knew that Saget could be such a savage?

Along with calling Chris Brown out on-air for missing his scheduled appearance on the syndicated radio program The Breakfast Club, presenter Charlamagne Tha God took to Instagram to throw further shade at the controversial singer-songwriter. After Brown posted an apology on his own IG page, Charlamagne slipped in the comment section to let fans know exactly what he thought of of the star's absence. Blaming the star's no-show on drug use, the radio personality then followed up with an insincere "Hope he's ok."

It looks like Erykah Badu was DEFINITELY not fooled by Jennifer Lopez's nail-biting Instagram pic because the singer-songwriter hopped in the comment section to let JLo know she's on to her game. While Lopez does indeed have a face fitting of her fame and status, Badu quickly caught on to the heavily-edited aspect of the airbrushed photo and accused the star of using the Facetune app. "Come thru face tune," wrote Badu after serving the snap with a venom-filled "lol."

According to Lindsay Lohan, pop starlet Ariana Grande wears far too much makeup. Back in 2016, the Mean Girls actress decided to use Instagram as her very own Burn Book and put Grande on blast three separate times for beating her face just a bit too hard. Totally not grool, Lohan.