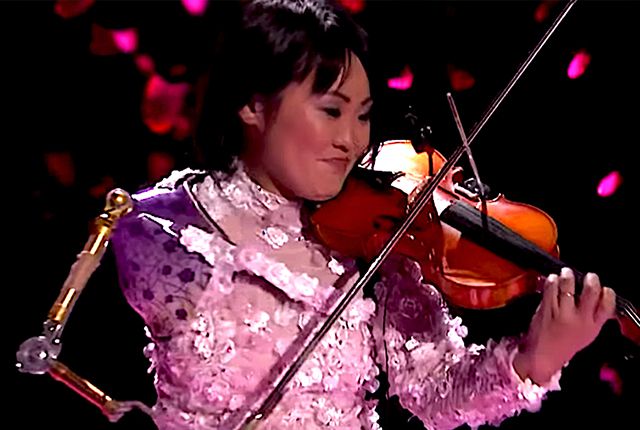 Manami Ito played the violin since she was 7. But a car accident seemingly guaranteed she would never play again. But this badass one-armed miracle violinist proved that nothing was going to stop her from achieving her dreams. Now she’s on her way to becoming a legend at "The World’s Best" on CBS.

Life Crashed Down On Her

In 2004, Manami Ito was in a horrible car accident. Thankfully, she survived. Unfortunately, she didn’t come out of the ordeal unscathed. As it turns out, Ito had suffered a terrible loss.

Unfortunately, Ito lost her right arm in the crash. Most people would have thrown themselves on their beds and never gotten back up. But Ito wasn’t about to let this little bump in the road stop her from enjoying life.

She Was Certifiably Brave

Instead of putting everything on hold, Ito balanced her life between her studies and physical rehabilitation. Eventually, all of her work and dedication paid off, and she became a certified nurse.

She Tried Her Hand At Sports

One day, Ito noticed that her fellow amputees were playing sports, so she figured if they could do it, then so could she. So, in 2007, she started swimming, and it affected her in an Olympic proportion.

In 2008, she swam in the Paralympics in Beijing and made it to first place. Then, in 2012, she made it to 8th place in the London Paralympics, and it was all thanks to her fierce determination and her prosthetic arm. Ito was determined to make her lifelong dreams come true, even if life had thrown her a major curveball.

She Could Do More

Ito knew that she was capable of more than just swimming. So, she started playing the violin using a regular prosthetic limb, and as it turns out, she was really good at it. Eventually, she got an arm that was lightweight and made playing a lot easier.

In Front Of A Live Audience

Ito perfected her craft and started performing in front of a live audience in places like the Takarazuka City General Welfare Center in Hyogo Prefecture in Japan and she loved every minute of the experience. But she had no idea she was on her way to becoming a one-armed miracle violinist.

If you weren’t happy with the way the Super Bowl went down this year, at least you had something to cheer about afterwards. But if you didn’t tune into “The World’s Best” talent show that night, then you might have missed Ito playing the violin (and that’s on you!).

Ito was able to blow audiences away on the new CBS talent show with her magnificent violin solo performance. In her bio video, Ito explained how it wasn’t easy getting from where she was to where she is now. It took a lot of courage and determination. But judging from her performance, it really paid off in the end.

All Hope Was Lost

She didn’t allow her condition to ruin her life, but it was rough at first. She didn’t leave her house for an entire year. But her mom hoped that she would one day play the violin again, and she did just that with the help of her prosthetic limb.

She was already a total hit and a role model in Japan. Now, Ito was ready to take on the world as "the miracle violinist." If her mission was to inspire people with her amazing talent and perseverance, then she accomplished that and more.

She Made Everyone Cry

Ito performance was so spectacular, that she was able to bring judges Faith Hill, Drew Barrymore, and RuPaul to tears during the show. This undoubtedly restored her faith in what she was doing, but it also inspired others, and the judges took notice.

Ito “Drew” Her In

After the performance, Drew Barrymore had something inspirational to say about Ito’s dedication: “I think not only are you talented but your perspective on life is something that the world definitely needs.”

She Rocked Her Solo

Ito had wowed the judges and the audience was left in tears. But was it enough for her to beat out the other competitors? After all, there were a lot of people to impress, not just Ru, Drew, or Faith.

Aside from the three main judges, Ito and her fellow competitors had to knock the socks off of the fourth judge, which didn’t consist of one person, but rather a collective of 50 people from 38 different countries called “The Wall of the Worlds.” So, Ito's performance had to outshine her competitors.

The Competition Was Tough

Ito had some tough competitors. Folks from all over the world were eager to go on stage, as they were ready to show off what they were made of. Ito had to go against underwater escape artists, stunt people, ballerinas, kids who could sing, and taekwondo experts, to name a few. But would her solo act be enough?

The First Hurdle Was Key

The Audition Round was first and it would be up to the Wall of the World judges to decide who made it to the battle round. But the point system was very important, so she had to impress everyone collectively.

She Had To Bag Enough Points

The American judges, Faith, Ru, and Drew could only give out up to 50 points each. But the Wall of the World judges can each give one point. So, moving to the next round would depend on who had the highest points.

The Road To The Battle Round

To move on to the Battle Round, competitors had to earn 75 points each. Anything less than that and they were dunzo! But getting to the top 24 was everyone’s ultimate goal, and Ito intended to make it.

If Ito managed to make it to the top 24, she would be able to compete for the title, and she certainly had a major incentive. The prize for the winner is a whopping $1 million. We’re sure that put more pressure than she’s ever experienced ever since the accident.

Did She Make It?

Thankfully, the one-armed miracle violinist was able to bag herself a total of 86 out of 100 points. Given how much raw talent the competition had, that’s downright incredible. Then again, Ito is one extraordinary individual. Just Ask Ru.

If anyone knows about overcoming adversity, it’s judge RuPaul. So, he praised Ito by saying: “It was absolutely beautiful and it really made me proud to witness your grace and your way of overcoming adversity. This is a lesson that every human alive needs to learn.”

She’ll Have A Good Run

The show will run for 10 episodes. So, Ito has plenty of chances to continue wowing America, and most importantly, the judges, who hold her fate and her chances of winning $1 million in the palm of their hands.

It’s Not Over Till It’s Over

Ito had undoubtedly hit a major snag during her 2004 car accident. But she found an inspiring way to turn an advantage into a disadvantage. Now, she’s showing the judges, the audience and the world that nothing is impossible.