A Woman Started an Instagram for Her ‘Pet’ Soup Ladle, and Now It’s a Viral Star 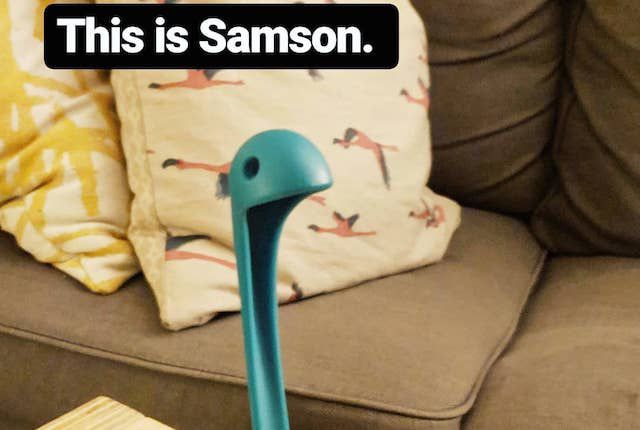 A company makes something called the Nessie Ladle. It is, as you might expect, a ladle that looks like the Loch Ness Monster. They gave its handle two simple dents meant to represent eyes. But for a woman named Margaret, they represented so much more. Because she crafted a whole identity for her ladle: Samson. Then she started a soup ladle Instagram to document their adventures together. Now, you can enjoy Samson the soup ladle Instagram and see what that little bugger is getting up to next.

That's Samson. He's Margaret's ladle. But you gathered that from this pic. What you might not gather just yet is how deeply your love for Samson the ladle will grow as you ride along his adventures.

[dx_custom_adunit desktop_id="RTK_K67O" mobile_id="RTK_5yk0"] We don't find this weird at all! If you can fit, a purse seems like a lovely place to live. You'd always have a cough drop by your side. And you'd get paid in "hastily shoved in spare change". That's it -- we're checking out purses on Zillow.

What an oddly charming gift! Beats a Target gift card, anyway. Good on you, cousin Jake. If you're taking requests, we'd love a radish.

[dx_custom_adunit desktop_id="RTK_K67O" mobile_id="RTK_5yk0"] It's nice to know that when you're a ladle, the rigid definitions of "pet" and "owner" don't apply. He's not "feeding his pets". He's "giving treats to his friends". His peers. We are all the same under Samson's eyes.

Here, we see Samson doing what ladles do. But he seems to be doing it of his own agency and volition. Because it gives him joy. Not just because its his job. We could all stand to learn a thing or two from Samson.

[dx_custom_adunit desktop_id="RTK_K67O" mobile_id="RTK_5yk0"] For humans, sink baths are just a baby thing. For ladles, they're the norm. Would that we could experience life through the lovely eyes of a child like Samson here.

The (Other) Odd Couple

Wait. Okay. Scrap the ladle/houseplant sitcom idea from before. This one is leaps and bounds more fruitful. Sam And Ham! It writes itself!

Samson is so polite. Whenever we're invited to a potluck, we just grab the nearest half-full bag of Cheddar Ruffles. Nobody at the potluck eats it, we take it home, and repeat it all over again come the next potluck. Why do people keep inviting us to potlucks?

[dx_custom_adunit desktop_id="RTK_K67O" mobile_id="RTK_5yk0"] Spices, but make it fashion. We are gagging, Samson honey. We know that cilantro tastes like soap to some people, but this lewk is clean to everyone. Yass!

What do you think they talked about? Normally it's taboo to bring up politics or religion at the dinner table, but we have a feeling that Samson knows how to tactfully navigate even the most hot-button of issues.

Don't Knock It Til You Try It

That's okay, Samson! Good on you for opening yourself up and trying new things. You can just stick to regular ladle food from now on. Which, as everyone knows, is... uh... let us get back to on that.

Nope! Of course not! It means everything is cheeks. And that's great! Cheeks are great!

Honestly, hamster? We love to dip out of social events early for hydration and anxiety-management purposes, too. You are our introverted, taking-care-of-yourself, destigmatizing-mental-health, rodent hero.

Think Outside The Bun

Yes! There it is! We told you we were gonna get back to you about "regular ladle food", and we did! Regular ladle food is Taco Bell! So if you've got any hungry ladles at home waiting to be fed, get thee to a Taco Bell, stat!

[dx_custom_adunit desktop_id="RTK_K67O" mobile_id="RTK_5yk0"] And some people say Mountain Dew is unhealthy. If it inspires self-esteem and confidence in just one person -- er, ladle -- then every bottle brewed was worth it.

Lost In The Sauce

But does he like to read the squishy hot sauce packets' jokes? Because we can't make up our minds if they're trying too hard, or if they're actually fun. What do you think? Join the conversation on #TacoBellSauceJokesAreTheyGoodOrAreTheyBad.

We've just got nothing but respect for Samson. The Crunchwrap is the platonic ideal of a Taco Bell order. It's crunchy, yes. But also chewy. The beef playfully framed by its lettuce, cheese, sour cream, and the aforementioned sauces. Only thing its missing? Some high-class plating from Samson himself.

[dx_custom_adunit desktop_id="RTK_K67O" mobile_id="RTK_5yk0"] First, he plates curry perfectly. Then, brings food to a hamster. Then, treats himself to some Taco Bell. Now, he concludes his day with the perfect dessert? Samson is truly #CulinaryGoals.

Sure, when Samson skitters back and forth on the rolling pin, it's "cute" and "charming", but when we do it, it's "you're going to break our rolling pin" and "please get out of the kitchen".

Honestly, we ain't mad at that. Every chef needs their signature. Emeril has "Bam!" Paula Deen has butter and casual racism. And Samson has little dotted foot prints.

[dx_custom_adunit desktop_id="RTK_K67O" mobile_id="RTK_5yk0"] In our divided times, Samson reminds us of one issue we can all find common ground on. Icing is, indeed, fun. From red frosting to blue frosting, from the Betty Crockers in the heartland to the Mrs. Fields in the cities: We can all come together on icing.

Those are, without a doubt, more cookies than we've ever baked in our entire lifetime. And it's not even all of them? Dang, Samson, don't hurt 'em.

If you want to follow more of Samson's tasty adventures, he's on Instagram @samsontheladle. But you probably won't get any free cookies just by following him. We tried.