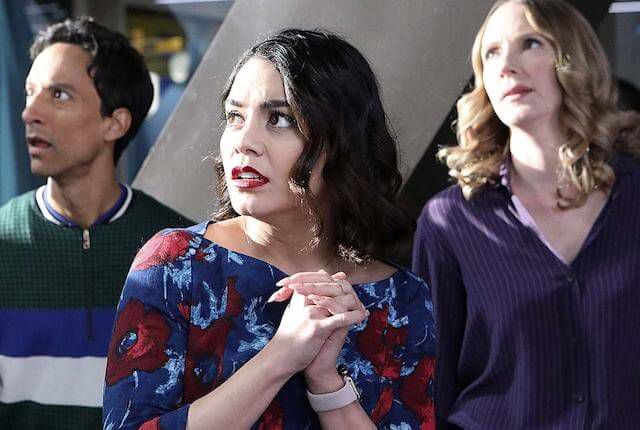 2017 has been a big year for TV (and the industry in general). From its highest highs to its lowest lows, this year has given us both the best and the worst TV we’ve seen in a long time. And, sure, we’re all about celebrating the finest achievements in television. But where’s the fun in that? Especially when we could just as easily spend our energy talking about all of the garbage we’ve seen this year. So that’s what we’re going to do. Here are the biggest TV disappointments from 2017.

“Wisdom of the Crowd”

We probably shouldn’t have been surprised that “Wisdom of the Crowd” sucked as hard as it did, but still. The series had a better cast of stars than most other CBS shows. Leave it to the network, though, to ruin a good thing by making it just like every other thing in its lineup.

The thing about “Taken” is that no one really cares how Bryan Mills developed his “certain set of skills.” All we care about is how he uses them to get his idiot daughter back. So while Clive Standen does an alright job as the younger CIA op, the fact is that he will never be Liam Neeson.

Can we all just admit that anything starring Katherine Heigl these days is doomed to fail? Does she even know how to play anything outside of the too smart, too good looking professional female? No. She can’t. It’s unfortunate, because we actually really loved seeing Laverne Cox outside of “OITNB.”

“Prison Break” would have been better off had it just accepted retirement in 2009. But 2017 seemed to be a big year for (unsuccessful) TV reboots, and dammit if “Prison Break” wasn’t going to be on that list, too. …how does that one “Frozen” song go?

It’s sad that “Training Day” was one of the last projects Bill Paxton worked on before his death earlier this year. Sad because there was zero chance it would live up to the greatness of the film — particularly in the hands of CBS, which, again, only knows how to produce one show.

Oh look, another reboot. Maybe the one good thing to come from TV this year will be the realization that no one is interested in seeing their beloved series remade for new ratings. It’s doubtful, but it’s still nice to dream.

“Bloodline” was a once-great show that tried to pack too much into its third season. Not only was there too much, but there was too much of the same shit we’d seen over the last two seasons. Only now the shit was somehow shittier? It became very confusing, very quickly.

This show was so full of plot holes that not even the good looks and okay-ish acting skills of its two leads could keep us invested. And having seen the 1979 film it was based on, we wanted to be invested. Alas, shit is still shit, even if it’s shiny and pretty.

Remember when “Grey’s Anatomy” first aired and people kinda hated Meredith Grey? Like they were expected to root for her, but they just wanted to punch her through the TV? “Girlboss” is that, minus the fast-paced drama that kept “Grey’s” fans watching into the second season.

We’re kind of convinced the people behind “Imaginary Mary” were big fans of 1991’s “Drop Dead Fred.” The animation quality certainly feels like it’s from 1991, and Mary is just as obnoxious (if not more so) as Fred. But there’s a way to do this type of show, and “Imaginary Mary” is not it.

“House of Cards” has been on a decline for a while now. Season 5 proves that recycling the same political and moral themes over and over definitely has its own shelf life, and we’re looking forward to this one’s expiration. Actually, scratch that. We’re mostly looking forward to the reign of Claire.

While we love the emotional ride in every episode of “This Is Us,” we can’t say we love the show’s tactic of pulling on the same heartstrings week after week. What was so special about season 1 is overused in its sophomore run. We’re hoping it — like our own awkward adolescence — is just a phase.

It seems as though “The Walking Dead” fatigue has finally, finally begun to set in. While the occasional jaw-dropping episode used to keep fans invested in an otherwise repetitive narrative, this last season has left us feeling more than wanting. It’s just not enough anymore, “TWD.”

Like other reboots on our list, “Dynasty” delivers on style but completely lacks the magic of its predecessor series. If you’re into campy soap operas, you may think you’ve found a winner here, but it won’t be long before “Dynasty” becomes another addition to the CW graveyard. Like “Melrose Place.”

Lee Daniels is so much better than “Star.” If you can get past the melodrama (chances are, you won’t be able to), the character development is sure to let you down. And though it may try to be the next “Empire,” it winds up more like that knockoff prom dress you tried to buy once from overseas.

“Arrow” is a great series, but even great series can be disappointing. Especially because the last four seasons have been near perfect, we kind of expected, you know, the same. This year isn’t the same, though (but Felicity is back to being super annoying, so there’s that).

The biggest problem with “The Defenders” is that it just took too damn long to become Defenders. More than half the season was spent on individual drama and a setup in which we were told over and over how they’re just not going to get along. Why couldn’t we have started the series at episode 5?

We kind of had higher hopes for “Powerless”; not only was it a DC property that wasn’t going to air on the CW, but it was a DC property with an actual sense of humor. Or, at least, it tried to be. Turns out, overacting and stale jokes don't go very far these days.

What the hell happened with the MCU on TV this year? If you thought “Iron Fist” and “The Defenders” were bad, “Inhumans” puts both to shame. It’s not even badgood, like the train wreck that was 1994’s “Fantastic Four.” It’s just… God damn, it’s just so f—ing terrible.