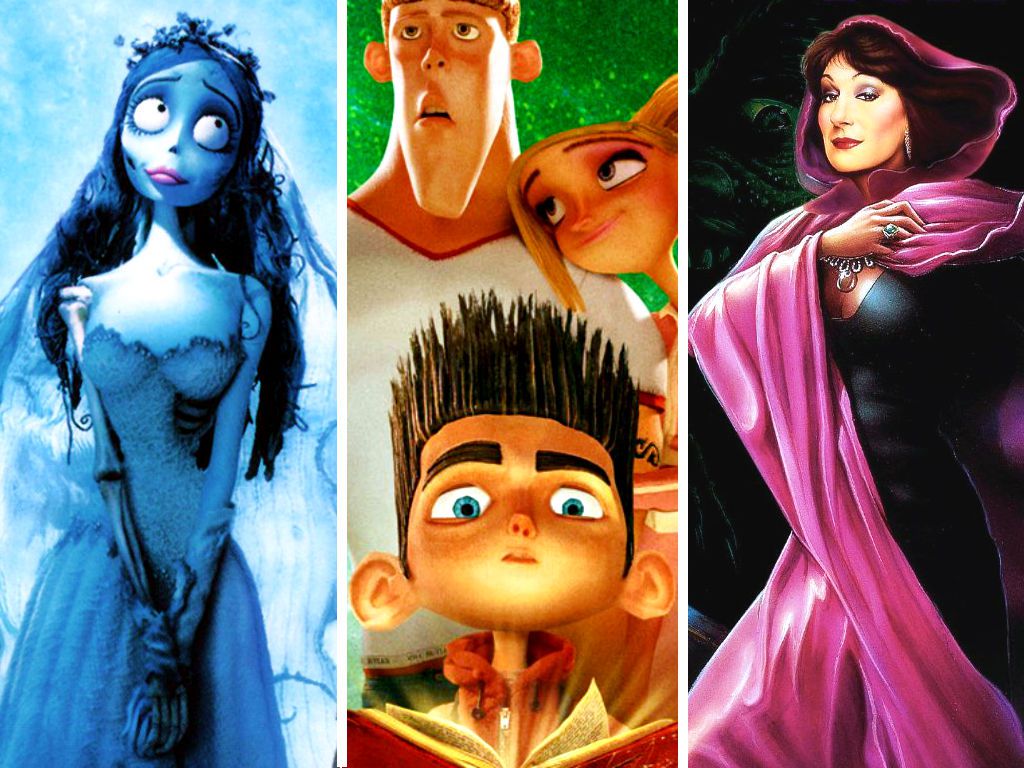 Hocus Pocus is a Disney movie that was released in theatres but actually flopped. After so much television airplay it developed a cult following and now is a beloved movie to watch around Halloween. It tells the story of a teen boy who accidentally raises three bad witch sisters from the dead and he's have to save the day - more specifically the three witches from stealing his sister's life force.

It's the Great Pumpkin, Charlie Brown

Casper is a movie that follows a father and daughter who movie into a haunted house. The daughter ends up befriending the youngest ghost, Casper, who - you guessed it - is a friendly ghost. The two of them end up forming an unlikely and very cute friendship.

Monster House tells the story of three teenagers who realize the haunted house on their street isn't really haunted - it is a living breathing monster house! With the talented voices of Steve Buscemi, Catherine O'Hara, and Maggie Gyllenhaal lending their skills to the film, it's a very spooky fun Halloween romp.

ParaNorman follows a boy named Norman who loves the paranormal probably because he has a special ability where he can talk to ghosts. He is left in charge to save his town from some zombies that come to life and terrorize the neighborhood.

The Nightmare Before Christmas

The Nightmare Before Christmas is both a Halloween and a Christmas movie. It tells the story of the pumpkin king, Jack Skellington, who wants to do Christmas for one year instead of Halloween and things don't go according to plan.

A new Addams Family movie is coming out later this year but nothing beats the 90's one - both of them. The first Addams Family follows the spooky family as they find their long lost Uncle Fester and try to bring him back into the family.

Halloweentown is one of the Disney Channel's original movies. It tells the story of a teenager who finally gets her witch powers and but also in the interim has to help save the magical town that her Grandma lives in - Halloweentown. It's the perfect family Halloween movie.

Practically any Tim Burton movie is a Halloween movie in our eyes. Corpse Bride is another stop-motion movie about a man that practices his vows for marriage and accidentally awakens a corpse bride who assumes he is now married to her.

The sequel to the original Addams Family is even more festive than the first. It tells the story of Uncle Fester falling in love with a truly evil woman who sends Wednesday and Pugsley to a camp, they have a scene reenacting the first Thanksgiving - while that's not Halloweeny it does fit for the fall season!

R.L. Stine's spooky children series came to life in the Goosebumps movie. After accidentally setting a bunch of monsters from fictional books loose a boy and his new friend must save the day and put all of the monsters back into the books.

Under Wraps is a very fun Disney Channel Original movie that follows a group of young teens who accidentally awaken a mummy. The teens decide to help the mummy in attempts to find his long lost love and avoid the bad guy who's trying to steal the mummy.

Mom's Got A Date with a Vampire

When a brother and sister are grounded they're forced to meet their mom's new boyfriend and he's bad, so bad, that he's a vampire! Instead of finding a way to escape grounding, they must now save their mom from her new vampire boyfriend.

The beloved cartoon came to life with the fun Scooby-Doo movie. The gang is invited to an island to inspect all of the spooky things going on at the resort. It's very cheesy, but very fun, and Matthew Lillard plays a spot on Shaggy.

This movie follows the story of a boy, Elliot, who befriends an alien and has to keep him a secret from his parents and adults. One scene Elliot, E.T., and his siblings go trick-or-treating with E.T. and they dress him up as a ghost, proving maybe it is too easy to hide an alien from your mom.

Frankenweenie follows the story of a boy dealing with life after his dog dies. Instead of moving on the boy brings the dog back from the dead but the pup is a little bit different now that he's a frankenweenie. The boy's neighborhood isn't into this new frankenpup and he is determined to prove them wrong.

Wallace and Gromit: Curse of the WereRabbit

This movie is based off the hit British cartoon "Wallace and Gromit" but this one follows the story of Wallace, who's obsessed with his garden, turning into a were-rabbit every night sand terrorizing his and everyone's gardens. It's up to Gromit to save his buddy and the day.

When a couple passes they are forced to haunt their home they lived in. A poltergeist named Beetlejuice persuades them to shout his name three times and he can help them with their haunts and things get out of control. Some parts can be a little spooky for young ones but overall it is a fun and spooky family film.

Buffy the Vampire Slayer the movie actually came before the television show. It's about a valley girl cheerleader who must accept her fate to become the next vampire slayer. It starred Luke Perry and Kristy Swanson in their peak 90's prime.

On Halloween night, two twin sisters have to save their parents from their greedy, witchy aunt's clutches, along the way magic and hijinks ensue. It was one of the Olsen twins' classic television movies and is still fun for the whole family.

The animated film Hotel Transylvania became quite the little series of spooky fun movies. Dracula runs a resort for spooky people not from the human world but things go haywire when a little human boy discovers the resort and falls for his bitingly cute vampire daughter.

After the success of Pirates of the Caribbean Disney tried to make another movie based on a ride: The Haunted Mansion. While this one wasn't nearly as successful as Pirates it is still a spooky fun time. It tells the story of a family, led by Eddie Murphy, who movies into a haunted mansion.

Halloweentown's sequel is almost as great and fun as the original. An evil warlock steals a spell book from Halloweentown and is determined to turn everyone into the Halloween costume they're wearing on Halloween. It's up to Marnie and her family to save the day again!

The Witches is based off of one of Roald Dahl's beloved books of the same name. It is about a boy who stumbles upon a convention of witches at the hotel that he and his grandmother are staying at. These witches are meeting to begin their plan to turn children into rats.

The Goosebumps sequel is arguably more Halloweeny than the original - I mean even the world "Halloween" is in the title! A couple of friends find Slappy and a Goosebumps called Haunted Halloween book, Slappy comes to life and is determined to bring all of his ghoul friends to life for Halloween.