Behind the Scenes of Instagram’s Most Elaborate Photography

Camila Villafane
Behind the Scenes of Instagram’s Most Elaborate Photography October 4, 2019Leave a comment 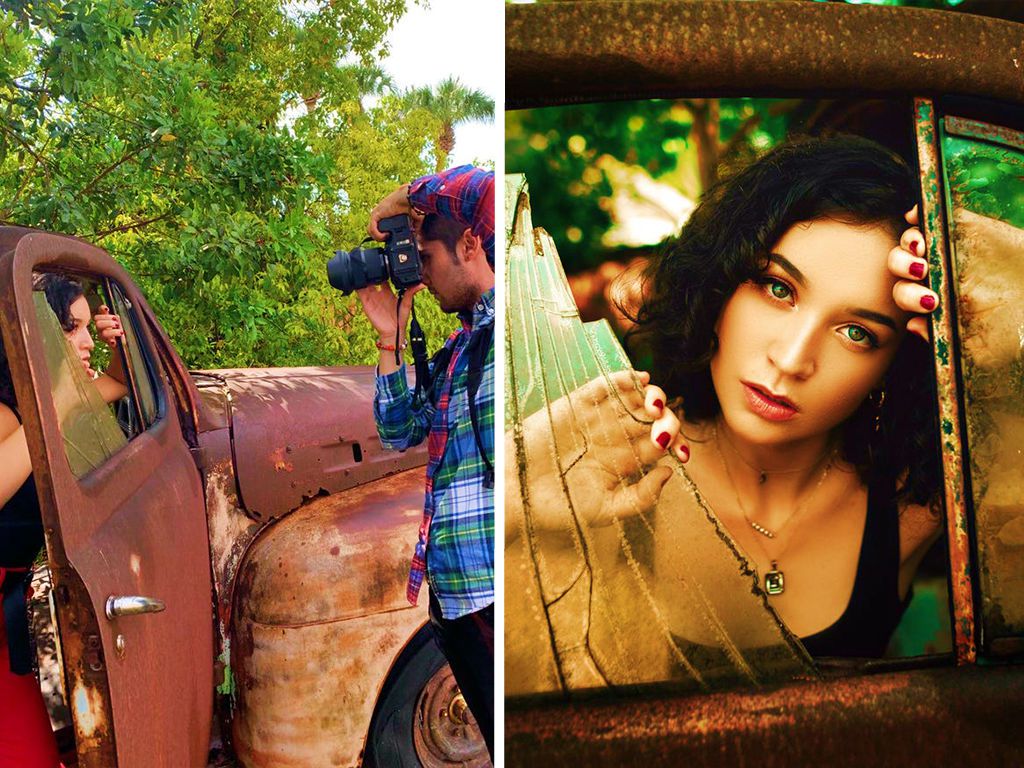 Even perfection needs a little retouching sometimes. Sometimes it takes a team of assistants, professional lighting and a studio of props just to make one gorgeous photo. These Instagram models and influencers shared their behind-the-scenes photos, revealing how they create their masterpieces...

Her Beauty Flowed Out of Frame

Kihmberlie is so gorgeous that not even a frame can contain her beauty. That’s why in this photo, it seems as though her black dress is flowing out of the picture frame.

She Had to Crawl Into Hole in a Wall

To create the effect, Kihmberlie needed a frame, a flowing sheet to mimic her black dress flowing out of it, and of course, a hole in the wall she could crawl into to make it seem like she was a 2D photo inside the frame. It took 4 or 5 edits to get it to look just right.

She Was a Rose Surrounded by Roses

She looks so elegant in her pink dress with a column of white light and hundreds of roses in the background and on the floor. But the behind-the-scenes concept wasn’t quite as pretty or easy.

It Took Hours to Poke Roses into Foam Boards

Kihmberlie spent hours poking roses into foam boards only to discover that she didn’t have enough flowers to fill up both boards. So, she cut the top off of the one board. Then she set both of the pieces up against some chairs and left the rest of the flowers on the floor. And to make herself short enough to fit into the set, she had to do lunges under her dress.

In this shot, the gorgeous model kind of looks like Belle from “Beauty and the Beast," trapped inside some sort of snow globe. Meanwhile, the overhead lamp made her look so ethereal and magical. But she wasn’t really in the globe, of course.

She Had to Borrow Her Mom’s Dress

The globe is actually a giant transparent ball that she inflated. Then Kihmberlie wore her mom’s wedding dress. She also had to throw a sheet on the floor to make the scene appear more theatrical. After that, it was just a matter of  finding the right angle and doing a little photo editing to get the finished look.

She Redefined the Concept of a Water Bed

To her Instagram followers, it seemed like Kihmberlie was posing while laying on a mattress that was floating in a body of water. But the behind the scenes image was a lot less elegant.

She Was Burning Up in 100-Degree Weather

In reality, she looked like she was next to a highway. She inflated a mattress, placed it over a blue tarp, and then threw in a bunch of blankets over it. But it was tough pulling off this shot because she was lying under over 100-degree weather.

She Defied Gravity for Basketball

In this shot, Kihmberlie is like Superwoman leaping towards the sky as she tries to catch the ball. It’s pretty impressive stuff, but she didn’t get this shot on her first or even on her second try.

She Nearly Died Making This Jump

Her props included a trampoline, a ball, and of course, the sky as a background. But she had to drive 45 minutes to get the trampoline. Plus, she had a hard time jumping high enough because the trampoline was a mini. She fell a few times and nearly tripped over the trampoline. And getting the ball in the shot was definitely a pain in the you know what.

She Had a Breakthrough Moment

This photo could be on the cover of a fashion magazine like Vogue or Elle. Kihmberlie certainly put her best face forward, (pun intended!) as she broke through yellow paper.

She Used a Large Yellow Paper From Amazon

The stunning model bought a large piece of yellow paper from Amazon and tore a hole big enough to fit her face through. Then she stood behind it with her legs wide open, stuck her head through the hole, and posed. But she admitted that it was very hot behind the hole.

Much like Kihmberlie uses props, angles and digital touch ups, a Mexican photographer known as Omahi creates stunning images like this one. In this shot, you can see a black hand holding a rose over the mouth of this beautiful woman.

The Shoot Was Done in a Bathroom

In reality, there are two guys holding a black blanket behind the model. One of the men has his hand painted black and he’s holding a rose over the model’s mouth. But the shocking part is that this epic shot was taken inside a bathroom.

He Recreated Some Drive-By Romance

Omahi managed to create a kissing scene that was totally movie-worthy, almost like the kind of thing you'd expect to see as the movie poster for “The Notebook”. To the untrained eye, it appears that a man is holding an umbrella while he and his girlfriend stick their bodies out of separate cars and share a smooch during a thunderstorm.

He Took Advantage of the Weather

While the final product looked seriously magical, Omahi had to pour rainwater over the umbrella using a water bottle. There was no actually lightning strike in the background either. That was digitally added later, and the photo was enhanced so you could see the two lovers kissing. But he took advantage of the cloudy weather and made it work.

He Brought the Desert to Her

Omahi lives in Mexico, and the desert was just too far away to create this photo. But by looking at it, you’d swear that this was an Arab woman with sand running down from her hand in front of her face.

He Used a Flat Screen for the Desert Backdrop

To make the look realistic, Omahi had the model wrap her head and face in a shawl. Then he had her stand in front of a flat screen projecting an image of a desert. After that, it was just a matter of using lighting and having her release the sand from her hand on cue to get the perfect snap.

A London-based blogger named Laura J. Hyatt went viral when she shared a photo of herself looking like a vision while she was surrounded by floating flowers. But the reality was a lot less glamorous.

Her Photo Was Shot in the Backyard

For starters, she was floating in a kid’s pool full of flowers in her backyard. Her legs were sticking out of the edge of the pool, and the person she was staring at was her mom who was also standing over her in the pool taking a photo of her daughter.

He Froze Water Droplets All Around Her

Florida-based photographer Chris Hernandez finds ways of turning something mundane into and out-of-this-world shot with the help of lightning, angles, and Photoshop, like this photo of a woman who seems to have water droplets frozen all around her.

He Turned a Puddle Into a Whimsical Photo

While the photo looked seriously whimsical, Hernandez actually had the woman sitting on a regular puddle of water on the side of the street. As she splashed the water, he took a snap and created a shot that was to die for.

He Captured a Stunning Chilly Photo

Hernandez seemed to have done the impossible by capturing a photo of a beautiful icy woman using her magic to create an icy border around her. But some people might see a woman trapped in a lake that’s about to freeze over.

He Threw Ice on Glass Over Lying Model

The model wasn’t trapped under an icy lake, of course. She was lying on a carpeted floor under a table with a glass surface. Hernandez then threw ice over the glass but made sure that it didn’t cover the model’s face. This proves you don’t need a lot of money to create an effect.

He Turned Her Into a Firestarter

Photographer Geo Leon who works in the Orlando/Tampa, Florida area, knows all about mastering angles, imagery, and directing a model to create an editorial masterpiece. Like the time when he made it seem like this model had a flaming match in her mouth while a map in the background burned down.

He Burned a Map Behind Her

In reality, there’s a man behind that model who’s holding a regular sized world map that’s been set on fire. But he zoomed in and used Photoshop to brighten the image, which made one heck of a difference.