Behind The Dudes of Dude Perfect: Meet Their Wives and Children 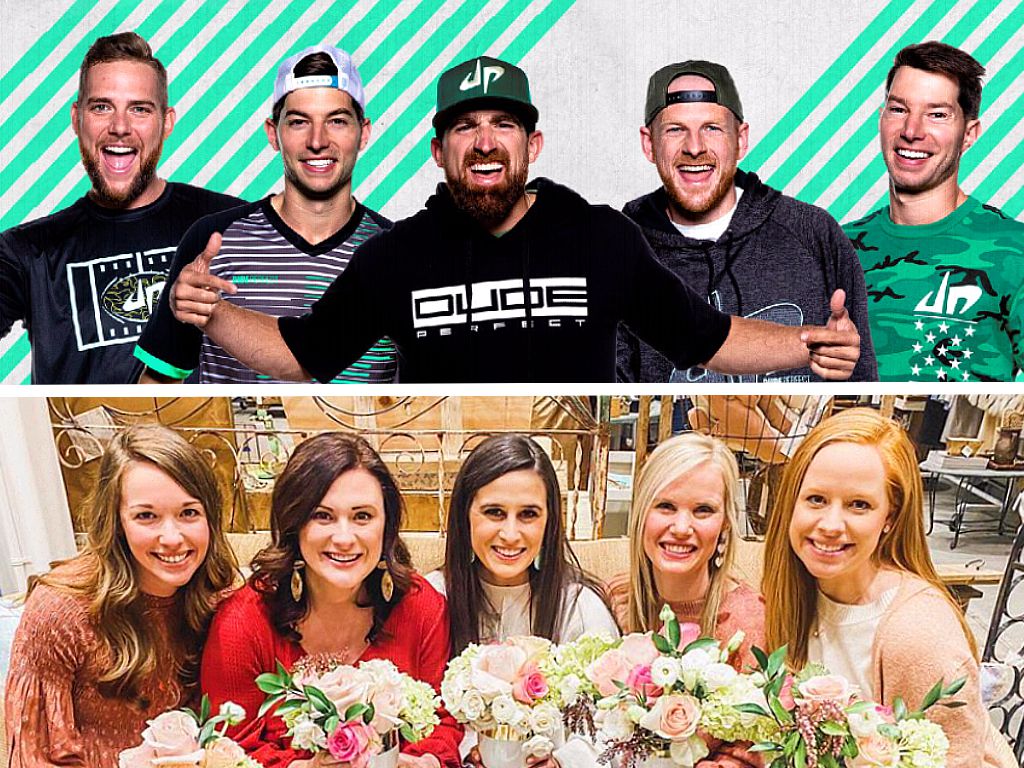 Dude Perfect is a YouTube sports show hosted by a group of friends. The group consists of twins Cory and Coby Cotton, Garrett Hilbert, Cody Jones and Tyler Toney, all of whom are former college roommates at Texas A&M University. We know and love these guys but who are the people behind the scenes that they spend most of their time with? Meet the wives and children of the guys in Dude Perfect.

Coby Cotton is a minute older than his twin brother, Cory. The Texas native was born on July 17, 1987 which makes him 32 years old. He is married to Aubrey Ellet, and the two of them married in 2017. They do not yet have any children.

Aubrey Ellet is Coby Cotton's wife. The pair got married in December of 2017. The pair actually got engaged in August of that year and announced it on all of their social media channels. The pair do not have any children yet but they will have their whole lives together.

Cory Cotton is Coby's twin brother and he is one minute younger than Coby. Cory is married to Amy Cotton, and the pair got married back in 2016. He actually welcomed a pair of twins too, Crew and Collins in 2018. He currently lives in Dallas with his family.

Amy Cotton is Cory's wife. The pair met in church in 2015 and were married in 2016. She was born on March 8, 1991. According to her Instagram, Amy is currently pregnant with a baby boy, who will be the younger brother to twins Crew and Collins Cotton.

On November 30, 2018 Amy Cotton gave birth to fraternal twins Crew and Collins Cotton. The first-time parents got the best of both worlds because Crew is a boy and Collins is a girl, which Cory found out during a fantastic gender reveal on an episode of "The Dude Perfect Show" last year.

Garrett Hilbert is yet another one of the dudes of "Dude Perfect" who is also happily married with a family of his own. He was born on May 13, 1987 and is currently married to Kristin Hilbert. The two of them have three children: Lincoln, Iris, and Owen.

Kristin Hilbert is Garrett's wife. She actually attended Texas A&M University football games with her future husband when they were in college together. The pair were married in 2011. Her first instagram post was actually a photo announcing that she was pregnant with her first child and now the pair have three children together.

Owen Hilbert is the oldest child of the Hilbert family. His birthday was on February 6, 2015. His father, Garrett, instagrammed photos of the family celebrating with Owen jumping and the family eating donuts that spelled out "Happy Birthday Owen."

Lincoln James Hilbert was born August 15, 2016, and his birth was announced on his parent's social media accounts. He lives in Frisco, Texas with his family. He is the middle child of the family in between Owen and Iris. He is a little bit bigger now than shown in the photo as he is turning 4 years old this year.

Iris is the youngest member of the Hilbert family. She was born April 12, 2018. She is the only daughter that Kristin and Garrett have. She seems to be a very happy toddler as her mom has a variety of cute photos of baby Iris posing with their big dog.

Tyler Toney is another original member of the "Dude Perfect" series. He is actually seen as the leader of the group even though he is the youngest. He was born March 24, 1989 and is currently married to Bethany Toney. The pair have two children together.

Bethany Toney is Tyler's wife. The have two children but also have two dogs named Sadie and Annie. She owns The Cookie Doe in Texas which is a cookie company where she makes custom-made cookies. They also have an Instagram page where you can preview the variety of cookies she makes.

Barrett Nathan Toney is Bethany and Tyler's oldest son. He was born on February 11, 2017. He just turned three years old and seems like a very fun kid. His dad has shown him on his instagram playing guitar and in years past he has dressed up as an elephant for Halloween.

Colton James Toney is the youngest son of the Toney family. Colton was just born last July. He hasn't yet made many appearances on his dad's YouTube videos because he is still a baby, but the Dude Perfect twitter shared the news of his birth along with dad Tyler and mom Bethany.

Cody Jones is the tallest of the "Dude Perfect" guys coming in at 6'6" tall. He is married to Allison Jones. He was born on October 9, 1987 in Plano, TX. He and his wife have two children named Landry and Lucy. He is also an avid hunter and absolutely not a vegan.

Allison Jones is Cody of Dude Perfect's wife. The pair married in June of 2016. She is one of the few Dude Perfect wives who is not very active on social media. She does seem to be a happy mom though, always posting pictures of her children and family on her Instagram page.

Landry Jones is Allison and Cody's oldest daughter. She was born in June of 2016. She dressed up as Jessie from "Toy Story" for Halloween, when her whole family dressed as Toy Story characters and celebrated in Walt Disney World. She seems to enjoy being a big sister too, and is often photographed hugging her little sister.

Lucy Jones is Cody and Allison's youngest daughter. She was born in July of 2018 which means that she will be turning 2 years old later this year. She dressed up as Forky the spork character from "Toy Story 4" alongside her family for Halloween. The pair announced her birth via Cody's twitter showing a picture of him and the newborn together.

Panda is the mascot of the Dude Perfect franchise and show. They nicknamed him Jack Black because of actor Jack Black's work as Po the Panda in the "Kung Fu Panda" movies. Dude Perfect has stated they will reveal the identity of the person who is in the panda costume if they tie PewDiePie in subscribers, but they have not yet done so.

Sean appeared in early videos with Tyler but has been MIA from Dude Perfect for a bit. It is rumored that he is the panda, but that has yet to be proven. He was also roommates with the five other guys while in college. He now helps them shoot videos as their cameraman.

The six guys of Dude Perfect actually started out as roommates of the Texas A&M University. The school is located in College Station, TX which is central to Austin, Dallas and Houston. Coby and Cory were communication majors, Garrett was an architect major, Cody was a real estate and finance major, and Tyler was a wildlife and fisheries major.

Dude Perfect's YouTube channel started back in 2009 when they posted a few videos of them doing trick basketball shots and betting on them with sandwiches. They then released a trick shot video from the Christian summer camp Sky Ranch which jumpstarted their YouTube career. They currently have 49.5 million subscribers.

Dude Perfect's YouTube show was such a big success that they took it to television. In September 2015, they started their own show on CMT, before the show was moved to Nickelodeon. The second season premiered on Nickelodeon on July 16, 2017, following the premiere of the 2017 Kids' Choice Sports Awards. On July 27, 2018, the program was renewed for a third season of 15 episodes but no word yet on if it will be renewed for a fourth season.

They Make a Living on Their Competitive Duels

One of the things Dude Perfect is best known most for is their variety of battles. The gang battle each other in a variety of different sports and games from iPhone apps to shark fishing to even bubble wrap popping. Tyler has won the most battles out of everyone and Coby has won the least.

Teaming Up with Whistle Sports

Take a Page From The "Go Big" Book

The Dude Perfect team also decided to take to some pages-- literally. Cory Cotton wrote a book called "Go Big" in 2011 and he wrote about how the gang gained success on social media and the secrets they have learned along the way. He also unveiled five practical principles for taking your passions, skills and dreams to the next level.