Best Video Games of the ’90s 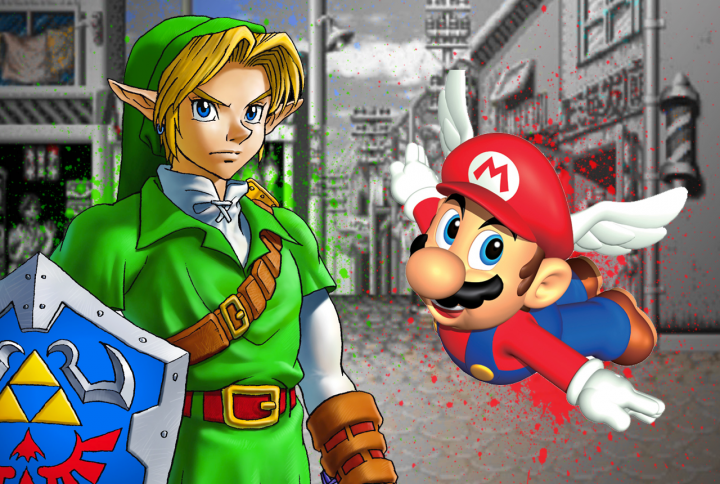 No more was Donkey Kong relegated to throwing barrels at everyone's favorite plumber, he was given his own adventure on his own island. The looked amazing, it played even better, and you could swap players at anytime in order to gain an advantage. Also, you got to ride a rhino, an ostrich, and a marlin. Sign us up.

How happy were we all when we finally didn't spend our entire allowance at the arcade trying to take down Shredder and the rest of the Foot Clan? In 1992, Turtles in Time was available on SNES! Cowabunga, dudes! With all four turtles as playable characters, this side-scrollers is one of the very best of the '90s.

The beginning of the fighter genre, this has all of the characters that not even your parents can forget.

For most of us, this was probably the game that introduced you to the rage-induced controller throw. The crazy-hard tunnel level was infuriating while also endearing when you were finally able to get past it.

Arguably the greatest game ever, Link to the Past is a sprawling RPG filled with memorable dungeons, epic quests, fun items and the genius alternate map, the Dark World. Puzzles, pendants, the Master Sword and of course, Ganon, Link's adventure has it all. This game is about as near to perfection as a game can get.

Who didn't to play as their favorite NBA player in a two-on-two style game? Oh, and you also get to punch your opponent, shoot from anywhere on the court and dunk a flaming basketball. Fun times!

With the SNES, like many other successful NES games, Metroid also got a 'super' upgrade. Samus received a new mission along with new power-ups and a bit more focus on exploration. Super Metroid was a must-play in the 90s.

With the release of the SNES, everyone's favorite Blue Bomber got not only a new adventure, but new abilities, upgrades and the assistance of new characters. While X is no Mega Man II, its one of the best of the 90s.

When Nintendo released the Super Nintendo console, with it came Super Mario World. Once again Mario was talked with rescuing the princess from the clutches of Bowser. But this time, Mario had the help of Yoshi, a feather cape and the ability to have a back-up power-up.

Quite possibly, hands down the best split-screen multiplayer experience ever, ruining countless friendships over "screen-peeking."

Mortal Kombat pushed the envelop when it game to fighting games. It will always hold a place in our hearts, right before we hear "finish him" and someone rips the still-beating heart out of our chest. Nothing quite like beating an opponent and then ripping their head off and pulling their spinal cord out through their severed neck.

One of the best RPGs in existence, Chrono Trigger somehow finds a way to make time travel feel like an emotional, religious experience.

This entry in the Final Fantasy series propelled the JRPG into the spotlight in the west. It's considered by some to be the best of the series and also one of the greatest games ever.

Bringing about the most celebrated villain in all of video game villainy, SHODAN is finally making a return to video games years after this masterpiece released.

The game that started it all. Ostensibly a thinly-veiled clone of the game Wasteland, Fallout has since gone 3D and is one of the most popular franchises in the world.

With its iconic fog (that was initially used as a way to hide that the console couldn't handle the textures), one half of the survival horror genre was brought to life.

The first Resident Evil was good, but it was missing the one thing we really wanted: a zombie apocalypse in the city. Resident Evil 2 gives us that in spades.

The start of a new era, while the original Lara Croft was, well, proportionally unhuman, the exploration mechanics were revolutionary, and the start of a true adventure genre.

Castlevania: Symphony of the Night (1997)

Many still to this day consider it the best "Metroidvania" game ever made, and you'd be hard-pressed to think of a game that did it better than this classic.

When the game first came out, families suddenly had something to do instead of watching TV game shows together.

While it didn't create the first person shooter, it's safe to say that Half-Life found a way to perfect it, influencing every shooter game since.

Taking the Zelda series to new heights, it's still considered by many the best game in the series.

Moving Metal Gear from 2D to 3D, its unique brand of stealth action and humor hasn't been replicated anywhere else.

The hack-and-slash genre never had it so good, and its popularity has only grown across three games.