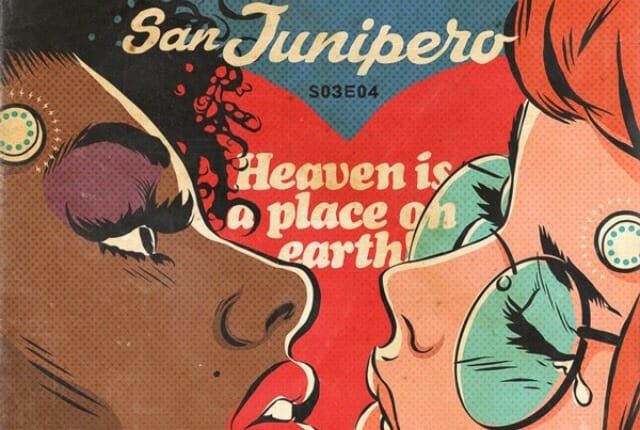 Black Mirror is a Netflix anthology series about the horrors of modern society. It casts a, well, a mirror on our addiction to tech. In other words, it's our generation's Twilight Zone. And the show is an inspiration to Brazilian pop artist Butcher Billy. He illustrated a series of Black Mirror comic covers, positing what the episodes would look like as a series of vintage pulp comic books. So turn on your implanted memory chip. Because it's time to check out some Black Mirror comic covers.

"White Christmas" doesn't quite spread holiday cheer as it does holiday technology-induced-dread-and-malaise. Snowed in their remote outpost, Jon Hamm and Rafe Spall swap stories: an augmented reality dating service resulting in death, an artificial consciousness brought to its brink, and a tragic melodrama involving infidelity. The twist ending ties everything together expertly.

Hated In The Nation

Starring Kelly MacDonald, Faye Marsay, and Benedict Wong, "Hated In The Nation" extrapolates the concept of online trolling to a logical, deadly conclusion. Detectives examine a series of potentially related murders -- all victims were the target of online shaming and harassment. Eventually, the deadly hashtag #DeathTo is discovered, and a series of murderous insect drones makes sure each victim feels the sting.

"Metalhead", filmed in glorious black and white by acclaimed genre director David Slade, takes the robotic research being done by Boston Dynamics and runs with it. In a post-apocalyptic Scotland, our heroes try to survive while being hunted by vicious robotic dogs. The hints at what happened to the human race are haunting.

"The Waldo Moment", an episode that's absolutely not prescient given our current political climate (nope, not even a little, nuh-uh), centers around a popular blue cartoon named Waldo, the weary comedian who performs as him, and the campaign to get him -- the cartoon, not the performer -- elected to Parliament.

Directed by 10 Cloverfield Lane's Dan Trachtenberg, "Playtest" depicts a nightmarish descent into an increasingly visceral hellscape. A traveller is implanted with a chip to test a video game company's new augmented reality horror game, but his sense of reality is warped and skewed, with devastating consequences.

Starring a pre-Star Wars Domhnall Gleeson and a post Peggy Carter Hayley Atwell, "Be Right Back" explores the melancholy themes of love, loss, grief, and acceptance. After her boyfriend is tragically killed in a car accident, a woman tries to spend life with an AI that is programmed to imitate her boyfriend.

Shut Up And Dance

If someone had proof of you performing salacious or incriminating acts, what would you do to keep it a secret? That's the tantalizingly sour hook of "Shut Up And Dance", which features a teenager and middle-aged man bowing to the increasingly deviant demands of a blackmailer. Be warned: the twist at the end might be unfair.

"San Junipero", which won Black Mirror an emmy for Outstanding Television Movie, has incredible central peformances from Mackenzie Davis and Gugu Mbatha-Raw, explores a lesbian relationship for the first time in the series, and has a notably hopeful tone. San Junipero may be a simulated reality, but you'll believe the love between Yorkie and Kelly.

The pilot of Black Mirror pulls no punches. It asks you to be onboard with icky material right out of the gate. It is, in no uncertain terms, the story of the Prime Minister of England being blackmailed into having sex with a pig on television. There's no way anything like that would happen in real life, right? Oink.

A mysterious signal appears on screens, turning whoever sees it into passive voyeurs hellbent on watching (and filming) destruction. A woman wakes up in this nightmarish society with amnesia, and must figure out who she is, how to stop the signal, and how not to get killed. It wouldn't be Black Mirror without a jaw-dropping twist, either.

The Entire History Of You

In a world where people record every part of their lives via first-person technological implants, how do you deal with love? With jealousy? With the inherent ambiguity of memories? With accusations of infidelity? According to "The Entire History Of You", you deal with it in emotionally -- and eventually physically -- unhealthy ways.

Directed by Jodie Foster and starring Rosemarie DeWitt, "Arkangel" begins with a societally beneficial enough concept: What if there were chips allowing a parent to track their children and block upsetting imagery from them? The concept, of course, results in horrific consequences, with children becoming emotionally stunted and volatile.

"Nosedive" is, in many ways, a departure for Black Mirror. It was written by comedy writers Rashida Jones and Michael Schur, directed by Darkest Hour's Joe Wright, and features a satirically bright pastel palette. Bryce Dallas Howard and Alice Eve are our anchors in a world where folks rate each other on every possible interaction. What could possibly go wrong?

From acclaimed, gritty-and-grimy director John Hillcoat comes "Crocodile", an episode about the paradoxical malleability and rigidity of memory. A woman and her companion strike and kill a cyclist, covering up the crime for years. When the companion wants to come clean, she kills him, too, and must undergo a series of police-aided memory recalls to avoid being caught.

If you're having dating woes, "Hang The DJ" will have particular resonance for you. An omnipresent dating service, facilitated by a voice known as Coach, collects data of all participants and matches folks to a thorough degree, even stating how long they can stay together. But what happens when a couple wants to stay together longer than the system says they can?