The Greatest TV and Movie Nerds of All Time

Jen Arbues
The Greatest TV and Movie Nerds of All Time January 15, 2018 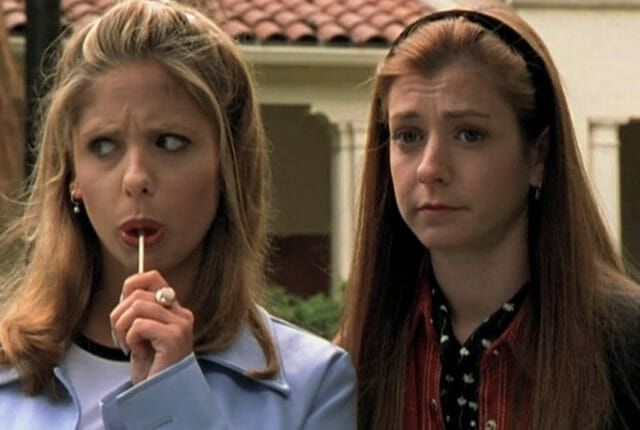 We’ve all seen “nerds” in movies and TV show. You know the ones. The stereotypical geniuses. The "Dungeons and Dragons" fans. And, of course the awkward loners. And you can always tell a movie or TV nerd. Because they usually dressed in outdated clothing. Or, worse yet, glasses. But aside from a slight astigmatism, 90 percent of the people playing nerds on screen are actually wicked hot in real life. And while a few hair and makeup departments do a decent job of camouflaging it, some of these TV and movie nerds are just too beautiful to hide.

As the goofy exchange student Fez, Wilmer managed to be the butt of 90% of the jokes on “That ‘70s Show.” Who knew that underneath all of that ridiculous polyester was a seriously attractive Venezuelan fella? Apparently, Mandy Moore and Demi Lovato did. It had to be the accent.

Sorry, Linda. Velma may be the Scooby gang’s resident geek, but that lame bowl cut and glasses just can’t hide how hot you really are. We’ve seen “ER.” We’ve watched “Bloodline.” We know. We are kind of into that monochromatic sweater-skirt combo, though. Red is definitely your color.

Emile Hirsch (“The Girl Next Door”)

Melissa’s character, Bernadette, didn’t show up on “The Big Bang Theory” until its third season, presumably because its producers requested a female character who could be both obnoxiously attractive (like Kaley Cuoco’s Penny) while simultaneously being obnoxiously intelligent (like all of the guys). It’s like the writers went by some sort of nerd fantasy checklist. She appeals to everyone, guys!

Louise Miller is every unpopular girl in school who wishes they could get back at the popular girls and make the hottest guy in school fall madly in love with her. The difference between Louise and every other unpopular girl is that 1. Louise is actually a witch with magical powers who can make shit like this happen, and 2. Louise is actually the hottest girl in school, in spite of her unfortunate wardrobe. Lesson here, obviously, is be a reincarnated Salem witch.

Oh look, a child genius with three separate B.A.s and three more Ph.Ds. Spencer Reid is like Doogie Howser on crack, only he has a much better sense of style and the looks to land multiple women over the course of his tenure on “Criminal Minds.” Girls really go for a man with a photographic memory, clearly.

Ah, the unpopular overachiever… No one wants to hang out with a know-it-all who has anxiety issues, unless of course that know-it-all happens to look anything like Alison Brie. Then there isn’t a single red-blooded human being out there who would turn down the opportunity.

There’s just something about Zachary Levi’s Chuck that makes him immediately attractive. Maybe it’s that hot Buy More uniform? Or the CIA secrets embedded in his brain? Or maybe it’s that goofy grin and those sweet, soulful eyes of his? We’ll never know for sure.

Kristen Bell is a little different than others on this list because Veronica Mars was pretty much the coolest nerd to ever hit the small screen. She was a geek, definitely, but also the kind of geek you just wanted to hang out and solve crimes with. It’s no wonder she was pursued by so many suitors over the years.

Felicity Smoak is the “smoak”-ing hot (we are so sorry) IT tech who helps Arrow do all of his Arrow things in Starling City by keeping an electronic eye on him. She’s the brains behind his brawn and the one who pretty much holds the team together. And on top of fighting crime in her own city, she also gets to do it in Central City every now and then — because she’s just that good.

Amanda Seyfried has said that she was happy to play the nerdy friend to Megan Fox’s popular Jennifer because she didn’t want the pressure of being the attractive one. Too bad for her that in spite of her lackluster portrayal of Needy, she still wound up way hotter than Fox. Probably because homicidal succubus isn’t a good look on anyone.

ABC Family’s “The Middleman” didn’t last very long (only a single season), so you may not remember much of it as a series. We can guarantee, though, that you’ll remember Wendy Watson, the artist turned secret agent sidekick. Or at the very least, you’ll remember her leather catsuit.

Ned the pie-maker was a sweet, thoughtful, and shy small business owner with the added talent of being able to bring dead things back to life with a single touch. Of course, if he were to ever touch them again — like his crush Chuck — they would die in a much more permanent manner. We think we’d take the risk.

Fred isn’t just ridiculously smart… she’s also a little crazy. Spending years in a hell dimension can do that to a girl. But here’s the thing: a lot of smarts and a little crazy make for one hot combination, and we would 100% follow Fred to any hell dimension she took us to.

You know, we didn’t think much of Willow Rosenberg outside of her being the sweet, bookish best friend of Buffy and Xander for the first couple of seasons of “Buffy.” Then, “The Wish” happened, and the Willow we had grown to love and depend on was replaced with leather and attitude. And we would never think of her the same way again.

There’s just something irresistible about a comic nerd who has a way with words. Seth Cohen was awkward in nearly every way imaginable, and yet, he managed to steal every scene he was in. He also stole the hearts of every teenage girl in the mid-2000s, and we’re all still trying to recover.

Elizabeth Berkley (“Saved by the Bell”)

Sure, most guys who grew up with “Saved by the Bell” still carry a torch for Kelly Kapowski. But we have to say, Jessie Spano was kind of a dream girl, too. We can definitely look past a little diet pill addiction. Like, everyone’s got their own problems, right?

Way before Ramsay Bolton happened, Iwan Rheon played an invisible boy named Simon on the British TV show “Misfits.” While his character was absolutely weird and awkward, at some point we were introduced to “Future Simon,” who had shed his social anxiety for full-on confident hero-dom. And Future Simon without a shirt? All the yes.

Rachel Leigh Cook (“She’s All That”)

Laney Boggs was the epitome of the hot nerd cliché, and if there were one film that could be pointed to for the trope, “She’s All That” would be it. We all knew those glasses were a poor disguise. Baggy t-shirts and overalls can’t hide shit. And if you think for one second every girl didn’t fantasize about their own Sixpence None the Richer staircase reveal, you’d be dead wrong.