Board Games That Deserve To Be Turned Into Blockbuster Movies

Chima Simone
Board Games That Deserve To Be Turned Into Blockbuster Movies February 19, 2018 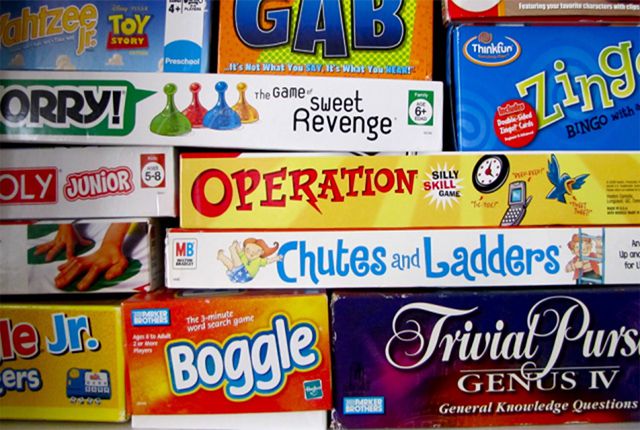 Between Jumanji: Welcome to the Jungle and a Clue remake in the works, it's clear that Hollywood producers think  board games deserve movie adaptions. Even despite the atrocity that was the Battleship movie, they keep going back to the well for more board-game movies. So why not choose the best ones? Because it's also clear they need some better material.  Here are our suggestions of the best board games that deserve to be turned into blockbuster movies.

"Life: The Movie" would follow a delightfully average all-American family on their #Blessed journey through life’s most ordinary accomplishments. Until one day when they take a wrong turn in their perfectly normal car and stumble upon THE SPINNER. Realizing that their lives are not the self determined wonderfest they always assumed them to be, the family embarks on an adventure (sans car) to escape from the world crafted for them by omniscient gods who think of them only as playthings. Oscar bait, no question.

When an acclaimed astrologist moves into a manor in the hills of Scotland he quickly realizes that it’s haunted by a ghost with terrible communication skills. The ghost can’t talk but he can ghost up some cryptic visions and he’s desperate to tell Astrologist McGee the details of his death. Professor Trelawney assembles a team of world famous mediums to help him uncover the truth behind who murdered his new ghost friend. Spoiler alert, it’s one of the mediums. Didn’t see that coming, did you?

If Sorry! were a movie it would just be a bunch of friends going through life, f**king eachother over at every turn. It wouldn’t really resemble the board game all that much except for that every time one of the friends did something awful they would scream SORRY and laugh for an irritatingly long time.

A bunch of people lose their minds and try to kill eachother using elaborate booby traps after crazy Aunt Agatha dies and leaves a f**k ton of money to fight over. Last person to not get crushed by a falling bookshelf gets the money! My money is on Poopsie the cat, she’s vicious.

A family friendly animated romp through the jungle follows a bunch of hippos as they search for a new home with enough food for them all. Tension will brew among these friends who are used to just sitting around all day but they’ll learn to work together and then they will feast! What do hippos even eat? I don’t know. Apples? Fish? Other hippos? Hopefully one day we’ll find out.

Resilient pioneers settle a new land in this probably boring but definitely nice to look at big budget drama full of sweeping landscape shots and lots of montages of people cutting down trees and shearing sheep. The two most attractive people in the movie will fall in love, an old guy will die, some sheep will get stolen or a barn full of grain will burn down. It’ll win a bunch of Oscars and your friends will never shut up about it.

T.I.M.E. Agents travel through time and across worlds to inhabit the bodies of people from other realities and stop temporal paradoxes from destroying the universe as we know it. HOW COOL IS THAT?! This would be an awesome movie but I’m even more excited for the inevitable video game that would follow it. Get on it J.J. Abrams.

Just trust me on this one. At The International Grand Championship Scrabble Tournament Extraordinaire two secret agents have to communicate top secret, WORLD SAVING, information to each other without letting the enemy (dirty commies or something probably) know what they’re up to. How do they do it? The only way they know how, with accurate spelling and an impressive vocabulary. It’s SCRABBLE: THE MOVIE. I’d watch it.

This game is aggressively heteronormative so Hollywood will love it! Essentially it’s all about men making as much money as they can so they can keep funding their lady friends’ extravagant shopping habits. Those rascally ladies, always squandering Daddy’s riches on baubles and frills. In a perfect world a Ladies & Gentlemen movie would divert from this format a little bit, maybe one of the ladies would get a job and use her own money to buy fancy clothes! Take that gender roles.

A world renowned surgeon gets called into the operating room for the challenge of her life. Some evil sadistic genius kidnapped the President’s daughter and has now returned her FULL OF OBJECTS. All of the objects are actually tiny bombs and if the surgeon can’t remove them in time the President’s daughter (who is definitely also the surgeon’s lover, small world.) is gonna blow!

A fantasy fan’s dream. A face off between a bunch of elves, orcs, human sized rats and other weird Tolkien-esque dudes who just can’t seem to get along with eachother. Apparently the world is too small for all these weirdos and instead of working on making birth control more accessible they’ve all just decided to wage war on eachother until only one race remains. The movie will end with everyone realizing that boats are a thing and maybe they don’t have to kill eachother after all. I smell a sequel.

Chutes and Ladders was originally a traditional Indian game by the name Snakes and Ladders which sounds like a way more high stakes adventure than just dealing with the occasional slide. Imagine a movie set in a maze unlike any other, a maze you have to climb through on ladders to escape from. Exhausting! All the while there are snakes (yes, ladder climbing snakes) only moments behind the brave climbers eager to devour them. If that’s not a blockbuster in the making I don’t know what is.

Pandemic isn’t your ordinary old seemingly unstoppable plague destroying humanity movie. That’s right, in Pandemic there are four different seemingly unstoppable plagues destroying humanity. The movie would follow a team of genius doctors (or one doctor, a soldier, some guy from an office, and a construction worker, according to the box) racing to find a cure, no wait, FOUR cures, before every human on earth is dead. How will they do it?!?! With science and handwashing, that’s how.

Betrayal At House On The Hill

Betrayal at House on the Hill is a friggin great game and it would make an amazing scary movie. A ragtag group of paranormal investigating weirdos with questionable backgrounds and lots of secrets gather together at a creepy mansion to hunt down a legendary evil ghost. PLOT TWIST, one of the spooky weirdos betrays the other spooky weirdos by letting the ghost possess his body, an act that unleashes chaos and terror like we’ve never seen before. Who will survive?!?!?! Nobody, that’s who.

A new dating app allows users to search for potential soul mates based on facial features. Do you like blue eyes and rosy cheeks, Anita is the girl for you. Do bald guys with beards really do it for you? Meet Richard! Things get crazy when the lead character just meets someone in real life and falls for them despite them not having the green eyes and perfectly straight teeth they’d always dreamed of in a partner. This RomCom has a moral to teach you.

An ideal Monopoly movie would be a lot like if Boardwalk Empire and Newsies had a baby (singing NOT optional). Set in 1930s Atlantic City, Monopoly is a heartfelt tale of the battle between hard working tenants and the evil real estate mogul who wants to evict them so he can build a hotel in Marven Gardens. Spoiler alert, they’re gonna raise a bajillion dollars and buy Marven Garden themselves, you will cry.

How did we get an Emoji movie before a Candy Land movie? Come on Hollywood, this is a seriously missed opportunity. Candy Land has a plethora of colorful characters and delicious scenery ripe for the big screen picking. I mean come on, Molasses Swamp, Gumdrop Mountains, Queen Frostine! It’s a trippy Tim Burton clusterf**k waiting to happen.

This feels like a no brainer. Who wouldn’t want to go see a movie about CONQUERING THE WORLD? Risk would be epic, it would be the Dunkirk of board game movies. Ok it would actually be the entire Lord of the Rings trilogy (extended edition) of board game movies cause to truly capture Risk’s essence it would need to be 9-15 hours long and take place over many films. You’ll also have to leave the movie refusing to talk to your siblings for two weeks. Fun for the whole family!

Girl Talk was pretty much Truth or Dare for people who didn't want to come up with their own questions. Oh and there were zit stickers that you had to put on your face if you didn’t want to complete your challenge. Remember when zits were the worst thing you could imagine? Siiiigh. As a movie Girl Talk would take place at a slumber party that gets super out of hand when pajama clad girlfriends decide they would rather disfigure eachother than tell their deepest most tragic secrets. Shits gonna get dark.

Don’t Break The Ice is a gripping thriller waiting to happen. If you have any sense whatsoever falling through ice should be something that fills you with soul chilling dread. Now just imagine a film that starts kind of slow and dry, a family on an annual ice fishing excursion (lame!). Everything’s going along as usual (lamely!) until a psychopath in a purple bear costume shows up and starts whacking the ice with a hammer. THEN THEY ALL DIE. You’ll never go ice fishing again.

A group of adventurers explore an island, searching for legendary hidden treasure. There’s just one tiny problem, the island is sinking and they’re all gonna die if they don’t abandon their quest asap. Will they let their thirst for riches destroy them? No! About 95 minutes in they’re gonna realize that they already have the greatest treasure of all, friendship.

Trains are the slowest moving thrill ride you’ll ever be on! To make Ticket to Ride an exciting movie it would obviously have to involve some kind of cross country race that uncovers the hidden secrets of North America’s most train station worthy cities. But what’s the best route to take? Who will go through Canada? Who will get the one ticket from Atlanta to Nashville??? I’m on the edge of my seat just thinking about it.