Jen Arbues
Here’s Everyone Who They Should Cast In The “Rick and Morty” Live-Action Film February 21, 2018 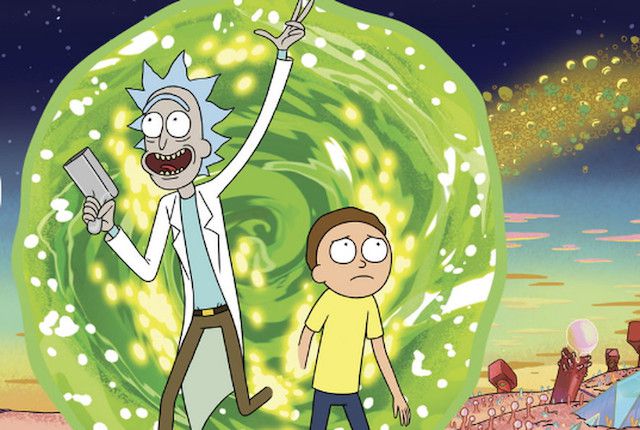 Wubba lubba dub-dub! Rick and Morty, Justin Roiland and Dan Harmon’s twisted take on the Back to the Future films, has become a cultural phenomenon in only three seasons. Fans of the series are outspoken, to say the least. And those who aren’t fans of Rick and Morty? Well, they clearly just don’t f---ing get it. But as great as the show is (and it is), there is one thing that would make it better: live action. If we had our way, here’s who would be cast in a Rick and Morty live action movie.

We all know Rick and the President were secret besties back before their big blowout at the end of “The Rickchurian Mortydate.” And who wouldn’t want to be besties with him? It was his idea to put the entire fate of humanity in Rick and Morty’s musical hands. Just don’t ask for a selfie. The President doesn’t do selfies.

Keegan-Michael Key has serious comedic range, and he knows how to play a character that yells a lot. Honestly, that’s all you really need with the President. Well, that and a little musical talent, and Key did make an appearance in a Weird Al Yankovic music video once, so there’s that.

A once-hero who succumbed to anger and darkness, Supernova is the “Rick and Morty” answer to every female Marvel superhero ever written. Sure, she starts out pretty alright, but she could probably stand to do some work on building her patience. And her fidelity.

There’s no denying Tessa Thompson would make the perfect superhero. She’s already had practice playing one in “Thor: Ragnarok,” and she’s drop dead gorgeous to boot. But she’s also f—ing great at the strong, psychotic type (you really need to be watching “Westworld”), and Supernova is nothing if not strong and psychotic.

No. One. Else. Should. Play. This. Role. Leslie David Baker’s character on “The Office” actually is Mr. Goldenfold, only with a penchant for junk food instead of domineering women. We could be wrong about that, though — we never did see much of Stanley’s home life, after all.

Jessica, the popular girl at Morty’s high school, is the stereotypical popular freshman girl at all of our high schools. She’s every 14-year-old boy’s wet dream and has eluded Morty since the beginning of the series. Except for that time he blew his shot in “Rest and Ricklaxation,” proving that even with all the confidence in the world, Morty is forever hopeless with women.

Mackenzie Foy is best known for playing the older version of the creepy baby in “The Twilight Saga” and Matthew McConaughey’s daughter in “Interstellar.” She’s been on both ends of the movie quality spectrum, which means she clearly has the range to pull off a high school crush. Okay, so we also think she and Noah Schnapp would make the most awkwardly adorable onscreen pairing.

Wise, unassuming, and generally a great friend to have around in a time of need, what kind of idiot wouldn’t want Birdperson by their side? Besides Tammy, of course, but let’s just all try and forget about that crazy, backstabbing bitch. This is about Birdperson. And Birdperson was in a band called “The Flesh Curtains,” for God’s sake.

There’s something kind of dopey about Birdperson, which is why Matt Damon would be the perfect fit. It’s not that he’s unattractive or anything, but he isn’t one of those stand out from the crowd kind of guys, either. Plus, we’ve already seen Matt Damon in every kind of weird space suit there is, so Birdperson’s armor would be a very logical next step in his costuming career.

If there were an actual human version of a wet blanket, Jerry would be it. He’s intellectually on par with a four-year-old, has zero common sense, and 100% belongs in an intergalactic day care for the rest of his sad, pathetic life. He has made himself rather useful as the butt of every Rick joke, though, so we guess he isn’t a complete waste?

Not “Jurassic World”/“Guardians of the Galaxy” Chris Pratt. No, no. We’re thinking he should return to old form for this one and channel his inner Andy Dwyer. Sure, Andy is a thousand times more charismatic than Jerry, but we’ve seen Chris Pratt’s range, and we have faith in his ability to really own the character.

Incredibly high intellect? Check. Terrible taste in romantic partners? Check. Questionable relationship with alcohol? Check, check, and check. Beth is every bit what you’d expect Rick’s offspring to be, and she may not even actually be his real offspring. At least she knows how to throw a fantastic solo party.

One: June Diane Raphael already has experience with an Adult Swim series, “NTSF:SD:SUV::,” so she knows how to navigate the type of humor inherent to a show like “Rick and Morty.” Two: we’re pretty sure she’d be a total blast at any sort of ladies’ night wine party. And that right there is half the battle when it comes to Beth.

Summer is basically a secret badass. Sure, she may come off as a typical teenage girl, preoccupied with boys and social media. But when it comes down to it, she’s the one member of the Smith family you really want on your side when things turn to shit. Remember “Rickmancing the Stone?” Do not f— with Summer.

If there’s any doubt regarding Abigail Breslin’s ability to nail this role, two things should be kept in mind: “Scream Queens” and “Final Girl.” “Scream Queens” because it’s Breslin playing the almost-but-never-quite popular girl who would do pretty much anything to fit in. And “Final Girl” because she literally spends an hour and a half kicking solid ass.

As the younger half of the Rick and Morty duo, Morty is everything that Rick isn’t: awkward, scared, and completely and utterly average. He’s not the sharpest tool in the shed, but for whatever reason, he loves and supports Rick in every inter-dimensional venture. And, for reasons beyond any of us, Rick actually loves and supports Morty, too.

Noah already has experience playing an awkward kid who’s been scarred by inter-dimensional beings, so sliding into the role of Morty would be an easy fit. Plus, just look at him. He looks nervous, all the time. Even when he isn’t being pursued by monsters as Will Byers.

If you were to take Doc Brown, multiply his IQ by 1000, and then drown him in a sea of alcohol, you would have something close to Rick Sanchez. Genius and alcoholism go hand in hand as it is, but Rick has the added bonus of both extreme cynicism and lack of morality. Basically, he’s the very best pretend version of Doc Brown ever.

He has the look and the build, for sure. But Jim Carrey also has the right crazy to intellect ratio to play Rick. Like, sure the shit that comes out of his mouth sometimes makes it sound like he’s from another planet. But maybe he’s just reached that level of enlightenment, and we’re all nothing but a bunch of earth-bound peasants.