Where Are They Now? The Cast of “Baby Daddy”

Holly Adler
Where Are They Now? The Cast of “Baby Daddy” February 10, 2020Leave a comment 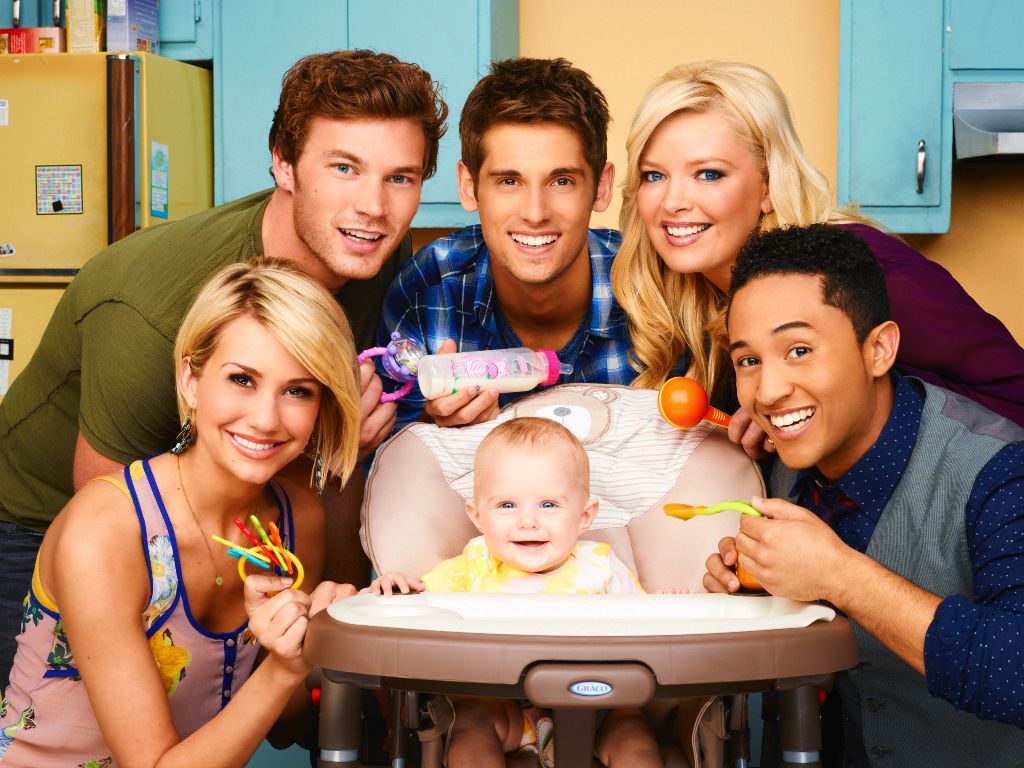 "Baby Daddy" was a sitcom that premiered on ABC Family (now Freeform) in June of 2012. The show took inspiration from the film "Three Men and a Baby." It followed Ben Wheeler, whose life changed overnight when a woman he had a one-night stand with left him to care for their baby. Almost three years have passed since the series ended, so where is the cast now?

Jean-Luc was born in Vancouver, Canada, where he began a career in dance. However, when his acting career took off, he put dance aside. In 2006, he appeared as Josh Trager on the TV series "Kyle XY." He later appeared in the Disney Channel Original Movie "16 Wishes" alongside Debby Ryan before being cast as Ben Wheeler on "Baby Daddy."

After "Baby Daddy" ended in 2017, Jean-Luc had a year long break before he landed the leading role of Dr. Daniel Kutcher on the CBS series "Carol's Second Act." The show is currently on its second season and also stars Patricia Heaton and Ashley Tisdale.

Derek's acting career began with minor roles in TV series such as "Cougar Town," "The Middle," and "90210." He appeared on a short-lived web series called "Project SERA" as the main character. In 2012, Derek got the role of Danny Wheeler, the brother of Ben, on "Baby Daddy."

Derek has been busy since "Baby Daddy" ended. He appeared on "American Gods" as Donar and the Hulu series "Dollface" as Ryan. Currently, he plays Sasquatch on the Paramount Network show "68 Whiskey." Recently, Marvel announced that Derek is going to play Craig Hollis/Mister Immortal on the "New Warriors" TV series.

Melissa Peterman began her career as an actress at a young age. Her first movie was the Coen brothers' film "Fargo." She went on to have cameos on shows like "Just Shoot Me" and "Ned's Declassified School Survival Guide" before her break-out role as Barbra Jean Booker-Hart on "Reba."

Melissa appeared on all six seasons of "Baby Daddy" as Ben and Danny Wheeler's mom Bonnie. She then appeared in the Hallmark film "A Gingerbread Romance" with Tia Mowry-Hardrict. Currently, Melissa plays Brenda Sparks on the CBS series "Young Sheldon." She plays the mother of Billy, who likes to bully Sheldon.

Chelsea's first big film was in 2007, in which she starred as Meredith in "Bratz." She went on to star in the Disney Channel Original Movie "StarStruck" and played Stella Malone on the TV series "Jonas" alongside the Jonas Brothers. In 2012, she appeared on "One Tree Hill" and landed the role of Riley Perrin on "Baby Daddy."

Chelsea continues to act, though she focuses more on doing voice-over work since "Baby Daddy" ended. She lent her voice to the character Jen Sanders on the Adult Swim series, "Hot Streets." She also voices Loy on the Netflix series "Archibald's Next Big Thing."

Tahj Mowry is the younger brother of famous twins, Tia and Tamera. Tahj began acting at a young age, appearing on "Full House" as Teddy, alongside his siblings on "Sister, Sister" and as T.J. Henderson on "Smart Guy." Most popularly, he lent his voice to Wade on the Disney Channel series "Kim Possible."

In 2012, Tahj starred as Tucker Dobbs, the best friend and roommate of Ben Wheeler on "Baby Daddy." In 2015, he released his debut single, "Flirt," and that same year he also released his first EP titled "Future Funk." His film "Welcome Matt" just finished production and should be released within the next year.

Kayleigh and Sura Harris (Then)

Twin sisters, Kayleigh and Sura Harris played Emma on seasons four through six of "Baby Daddy." For the first three seasons of the show, different sets of twins played Ben's daughter. In season one, it was Ali Louise and Susanne Allan Hartman. In season two, sisters Mila and Zoey Beske took over. And in season three, Ember and Harper Husak played Emma.

Kayleigh and Sura Harris spent three years of their life growing up on the show. Since "Baby Daddy" ended back in 2017, we have not seen much of either sister. More than likely, the pair decided to take a break from the spotlight. Hopefully, we will see more of the sisters in the future.

From a young age, Peter Porte knew he wanted to become an actor. He studied theatre at NYU and the Royal Academy of Dramatic Art in London. He had cameos on "Medium," "CSI: Miami," "Cold Case," and "Parks and Recreation." His big break-out role was as Ricky Williams on "The Young and the Restless."

Peter played the character of Brad Walker, who married Bonnie, on "Baby Daddy." When the show ended, Peter continued to find more work. He appeared in countless Hallmark films such as "Rome in Love," "A Gift To Cherish," and "Love at the Shore." In 2018, he married his partner Jacob Villere in New Orleans.

Daniella Monet appeared on TV series such as "American Dreams," "8 Simple Rules," "Zoey 101," and "Listen Up." Though she is most popularly known as playing Trina Vega, Tori's sister on "Victorious." Daniella played Sam Saffe during season five of "Baby Daddy." Sam was Ben's high school crush, who later became the manager of the Bar on B.

After her time on the show, she made a cameo in Ariana Grande's "Thank U, Next" music video. Daniella focuses her time on animal and environmental rights. She also teamed up with Evanna Lynch to create the Kinder Beauty Box. In September of last year, she and her husband had their first child, named Gio James.

Rachna was born in London but raised in Chicago, Illinois. She studied journalism at the University of Southern California, where she received her master's degree. She made her on-screen debut in 2006 in the short-film "Heather." Afterward, she had cameos on shows like "Days of Our Lives" and "Downward Dog."

In 2013, Rachna joined the cast of "Baby Daddy" as Sondra. Sondra was known for her high-pitched voice, and she had a brief romance with Tucker. She later had a cameo on "The Big Bang Theory" as an event planner who helped Amy and Sheldon. Most recently, she played Principal Karen on the Disney Channel series, "Bizaardvark."

Lacey Chabert began her acting career on Broadway, as young Cosette in "Les Misérables" from 1992-1993. She went on to play Claudia Salinger on "Party of Five." She was also the voice of Eliza Thornberry on "The Wild Thornberrys" and Gwen Stacy on "The Spectacular Spider-Man." She is best known for playing Gretchen Wieners in "Mean Girls."

Lacey appeared on several episodes of "Baby Daddy" as Dr. Amy Shaw, Danny's former therapist, and ex-girlfriend. She has since appeared in Hallmark movies such as "Pride, Prejudice and Mistletoe" and "Christmas in Rome." She has done voice-over work on "Shimmer and Shine," lending her voice to the character Zeta.

Jonna Walsh is from Los Angeles, California and started her acting career in 2004 when she made a cameo on the Disney Channel series "Phil of the Future." She went on to make appearances on "Drake & Josh" and "Everybody Hates Chris." In 2009, she played Lacey, the daughter of Jon Favreau, in the film "Couples Retreat."

Jonna starred on season five of "Baby Daddy" as Zoey, who lived in the same building as Ben. She liked Ben, but it never quite worked out for them as a couple. After her time on the show, she appeared on the series "Code Black" and "The Fosters." She also appeared in Hallmark films like "A Feeling of Home" and "The Spruces and the Pines."

Mallory was born and raised in Melbourne, Australia. In 2011, she moved to New York City, where she studied acting. In 2014, she starred in the two-part miniseries "Never Tear Us Apart: The Untold Story of INXS." She also played Caroline Huntington on "Young & Hungry," before she landed the role of Georgie Farlow on "Baby Daddy."

When Mallory finished her time on "Baby Daddy," she quickly moved on to the TV series "Galavant," in which she played Queen Madalena. The following year, she played Aida/Madame Hydra on the Marvel TV series "Agents of S.H.I.E.L.D." Most recently, she appeared on the USA series "Shooter" as Margo.

Christopher O'Shea was born in Kent, England. His first big introduction to acting was as a background actor for "Harry Potter and the Chamber of Secrets." He later starred in two short-films, "Dead Hungry" and "Highway Patrolman," before he landed the role of Phillip on "Baby Daddy."

Christopher got his big break in 2016 when he landed the role of Jareth Glover on the CBS series "Madam Secretary" alongside Téa Leoni and Erich Bergen. He went on to play Noah on the TV series "Gone" with Chris Noth. Last year, he starred as Alex in "A Simple Wedding" and he just finished production on "Modern Persuasion," starring Bebe Neuwirth.