Camila Villafane
This Is What the Characters From ‘Shameless’ Look Like in Real Life September 4, 2018 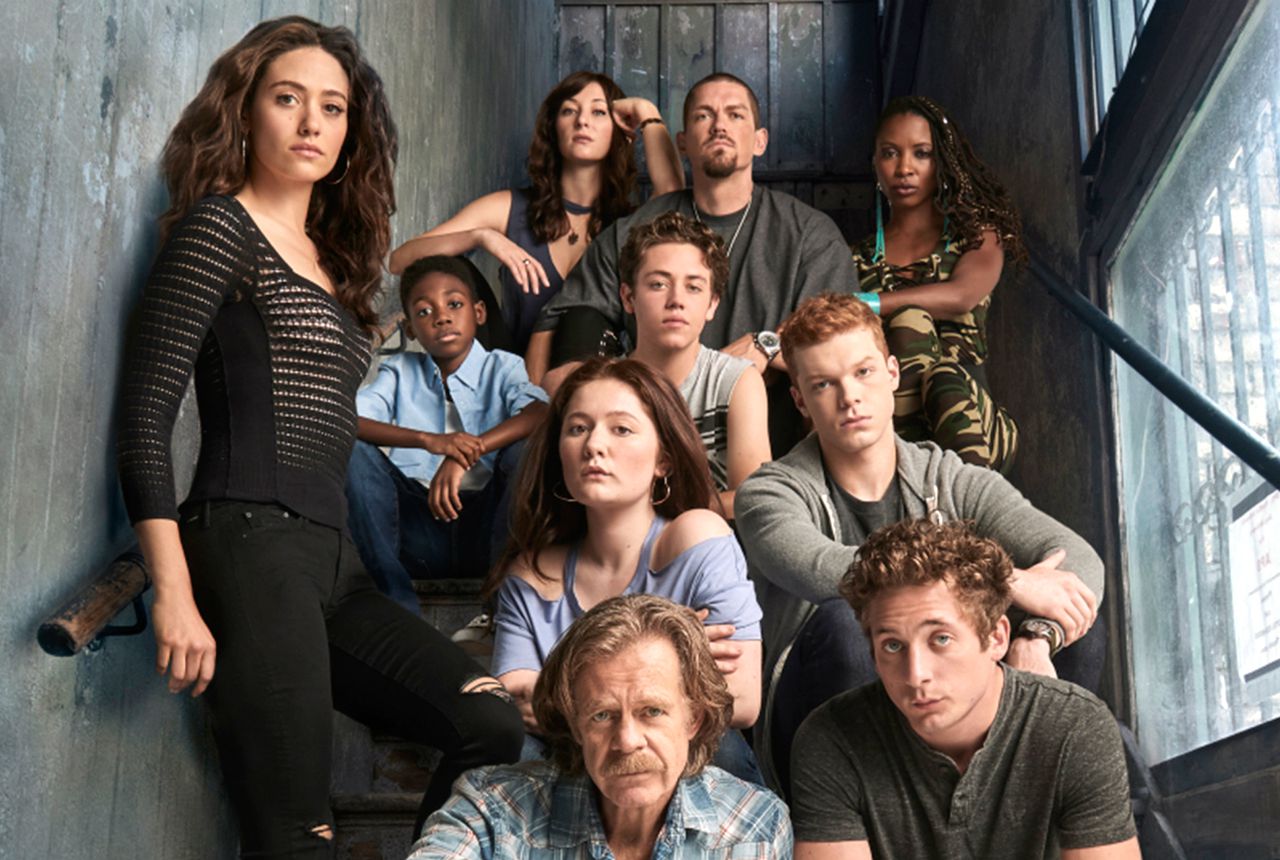 Get to know the cast of Shameless. And also get to know the dysfunctional characters they’ve played as part of America’s most messed-up family.

Of the entire cast of “Shameless,” Frank is the most unlikable. He’s a con artist who drinks heavily, and is high as a kite all the time. Oh, and he’s a horrible dad who doesn’t provide for his kids. He also dumps his parental responsibilities on his eldest daughter, Fiona. Dad of the year? Not really.

Frank may not be the best dad in the world, but Macy is. He’s married to “Desperate Housewives” Felicity Huffman, and he has three beautiful kids, Sofia Grace, Georgia Grace, and William H. Macy Jr.  He also wrote and acted in 1996’s “Fargo,” and he plays the ukulele in his spare time, so to say he’s the total package is a total understatement.

Sheila was a quirky woman with great maternal instincts. She also had a bit of an adventurous side to her, especially when she started dating Frank Gallagher. But she was also a huge neat freak and she suffered from agoraphobia, (the fear of people and open spaces) which left her trapped in the house.

Cusack has appeared in numerous films like “In & Out,” and “The Perks of being a Wallflower”. She’s married to attorney Richard Burke and has 2 kids, Dylan and Miles. She also owns Judy Maxwell Home, a boutique full of home decor and gift ideas. And just in case you didn’t figure it out yet, yes, she’s John Cusack’s sister. And it was her famous actor brother who encouraged her to really go for an acting career and never give up.

Frank had a daughter named Sammi with Queenie Slott. But he couldn’t have cared less until he needed a liver transplant. But the daughter, who’s a single mom living in a trailer, ended up temporarily moving in with the Gallaghers. Eventually, she ends up incarcerated for trying to get back at Mickey.

Bergl played Rachel Lang in the 1999 sequel thriller “The Rage: Carrie 2”. She’s also appeared on “CSI: Miami,” and “Desperate Housewives”. She has one child, and according to her Twitter account, she also performed as a cabaret singer for a show called “Kidding on the Square.”

Lip is Fiona’s oldest brother, and he’s probably the smartest. He aced the SATs, but he doesn’t make smart decisions in life. He’s slept with his one of his college professors, punched another one, and ended up drinking heavily, despite the fact that he hates Frank for doing the same. But what is he like in real life?

Unlike his character, Lip, White has appeared in “Afterschool” alongside “Justice League” actor Ezra Miller. His film credits also include the movie “You Can’t Win,” alongside Michael Pitt.  And in June, 2018, he announced that his girlfriend Addison Timlin was pregnant with their first child. So unlike Lip, White seems to be really happy and focused on starting a family.

Mickey doesn’t know how to live life without breaking the law. His relationship with Ian Gallagher was the only thing that made him human. But after trying to harm Ian’s half-sister, Sammi Slott, Mickey ends up in prison, and eventually escapes to live on the run.

Aside from playing Mickey, Fisher has played Vladimir in “The Twilight Saga: Breaking Dawn Part 2,” and has also starred as Michelangelo in “Teenage Mutant Ninja Turtles: Out of the Shadows”. And unlike his “Shameless” character, Fisher is straight and married to actress Layla Alizada. The two got married in a magical and super intimate wedding, after meeting on the set of the TV show, Godiva’s in 2005.

Svetlana was paid by Terry Milkovich to make a baby with Mickey, after Terry learned that his son was batting for the other team. Svetlana eventually gave birth to Mickey’s baby and the two got married. But they eventually split up, and Svetlana wormed her way into V and Kev’s lives.

Despite playing Svetlana, a Russian woman, Goreshter was born and raised in California. She studied classical ballet and eventually moved on to acting. Still, she doesn’t think too highly of her acting skills, as she once told The Huffpost that her audition for Shameless was, “one of my worst auditions.” She’s also appeared in the thriller “Paranoia,” alongside Harrison Ford and Liam Hemsworth. When she’s not acting, she teaches acting at the Anthony Meindl Studio.

Ian is the third-oldest child and suffers from Bipolar Disorder, just like his mom, Monica. He’s also out and proud, which is one of the reasons his fans love him. But he’s had a complicated relationship with Mickey, a rather shady criminal in the neighborhood. After spending time in a mental institute, he moved on to work as an EMT. Gallagher’s character definitely has many, many layers to him.

Monaghan began his modeling career when he was 3. But he got his first break playing Winthrop Paroo in “The Music Man”. He also starred in the film “Amityville: The Awakening,” and he played the role of Jerome, a Joker-type character on the series, “Gotham”.  But what his fans are really interested to know is if he’s gay in real life, to which he twitted, “This is the only time I will answer this here: No, I'm not gay. Yes, I play a gay character. No, the question should not be relevant.”

Jimmy was Fiona’s love interest. But he didn’t tell her that he had tons of money or that his name was Steve. He also had a wife, who was the daughter of a Brazilian criminal mastermind. But Jimmy was forced to leave Fiona behind. But eventually, he returned, but Fiona wasn’t interested in him whatsoever. Who would be?

Chatwin has gained a lot of recognition for his role in the mini-series, “Traffic”. He’s also appeared on “Lost,” and “Weeds”. He’s even worked on the film adaptation of “Dragonball: Evolution”. And when he’s not acting, he focuses on motorcycles, environmental and social issues. Funnily enough, he only got into acting when one of his buddies dared him to go with him to an audition. A total stroke of luck, if we’ve ever seen one.

Kev is V’s husband, and a friend to the Gallaghers. He also owns a bar, and allows Frank to drink for free. He’s not the brightest star in the sky, but he’s a nice guy. He was in a temporary polyamorous relationship with V and Svetlana, but that went south quickly.

Howey, who plays Kev, grew up on a sailboat cruising across the Pacific coast. He’s appeared in the indie-rom-com “Unleashed” alongside his former “Shameless” co-star Justin Chatwin. He also played Van on the sitcom “Reba”. He almost became a professional basketball player until he was bitten by the acting bug. Plus, he is a major LGBT supporter, as he openly discusses his support for the movement on Twitter and social media platforms.

Debbie starts out as Fiona’s helpful younger sister with a soft spot for her dad, Frank. But she has a setback as she gets older, particularly when she falls for a boy and intentionally gets herself pregnant. Now she’s struggling to provide for her daughter, as you can expect.

Kenney, who plays Debbie, knew she wanted to act since she was 4. She recently took on the role of Harris Conner-Healy on “Roseanne”. But when she’s not acting, she’s directing films like “The New Girl In Town”. She’s also a huge animal lover and would like to open a shelter someday, to which we say, you go, girl!

V is Fiona’s neighbor and best friend. She has a fierce attitude and works with her bartender husband, Kevin, whom she isn’t legally married to. So, when Svetlana, a woman whom she had been romantically involved with, needed to marry for a green card, V pitched in and married her.

Veronica’s marriage might be complicated, but Hampton’s been married to producer Daren Dukes since 2000, and she has two kids and she seems beyond happy. Before her big break on “Shameless,” she landed a recurring role on the series “Related”. And in 2010, she got the role of Nurse Graceffa in “Miami Medical.” Plus, she’s totally into video games, and was even the face of one of the characters on Left 4 Dead 2.

Liam is the youngest among his siblings, and no, Monica didn’t cheat on Frank. It turns out that Frank’s Nana slept with an African-American man, so Liam’s skin color was passed down through Frank’s DNA. But lately, Liam has been acting out and doing shady things just like his brother, Carl.

Isaiah always knew he wanted to act. He’s guest-starred on shows like TVland’s “Teachers”. He also appeared in a couple of comedy skits on “Jimmy Kimmel Live”. But he didn’t join the cast of “Shameless” until season 8. Before that, twins Blake and Brenna Johnson played Liam.

Carl is the second youngest sibling, and he’s as much trouble as his dad, Frank. He steals things for money, and he sells contraband. But despite his reckless behavior, all of his illegal actions are to help his family. So, in the end, he’s flawed, but as loyal as they come, and some might even say his illegal shenanigans are sort of justified.

When he’s not playing Carl, he enjoys riding bikes, motorcycles, and skateboarding. He’s appeared in films like “Fred Claus,” alongside Vince Vaughn, and in horror flicks like “The Unborn”. In 2017, Cutkosky channeled his inner Gallagher and got into some trouble with the law for driving under the influence, but he accepted a plea deal and got 2 years’ probation and a “whopping” $250 fine.

Monica was Frank’s ex-wife and the mother of the Gallagher kids. She suffered from depression, bipolar disorder, and was hooked on substances, just like Frank. She was absent through most of her kids’ lives, but returned in time to remarry Frank, shortly before her demise from a brain hemorrhage.

Webb played Monica in a guest-starring capacity. But she’s also been seen in the series, “House,” and the film “Ghostbusters II”. But before she considered acting, she went to The Boston Conservatory and Berklee College of Music to pursue a music career.
(NOTE: Although IMDB Wrote Berklee College as Berkeley, the correct spelling is Berklee.)

Fiona is a tough older sister, who’s like a mom to the Gallagher kids. She’s gotten her GED, helped her siblings stay out of trouble, and even fell in love a few times, but the last guy she liked, Sean Pierce, was a Frank in disguise. He left her after he relapsed, and that didn’t sit well with poor Fiona.

Rossum has starred in films like “The Day After Tomorrow,” and the big screen adaptation of “The Phantom of the Opera,” where she proved she could sing a high note. She married screenwriter Sam Esmail in 2017, and she recently announced she’s leaving “Shameless” after season 9. Bummer!