Jen Arbues
Characters On Sci-Fi Shows Who Make You Want To Completely Smash Your TV September 27, 2017 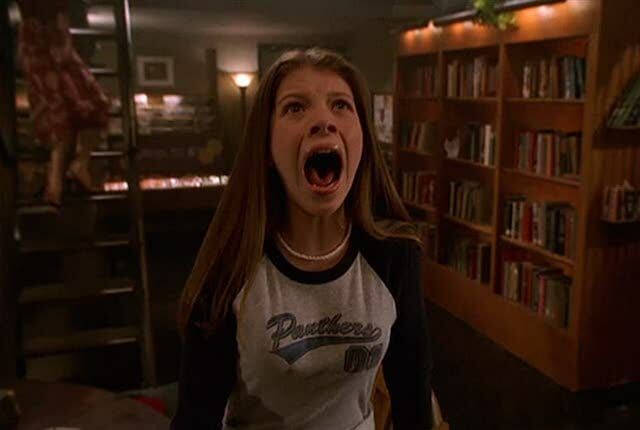 In the grand scheme of science-fiction television, there have been some really phenomenal characters who’ve graced our screens and made us believe in the “other”: Fox Mulder, Mal Reynolds, and Kathryn Janeway are just a few who come to mind. Of course, they’re on one side of the sci-fi character spectrum. On the other, you’ve got people like Valerie Stahl, Kai Winn, and Nikki & Paulo. Not everyone can be a great addition to a sci-fi team. Or even a decent addition. Or likable, in any sense of the word. So we’ve rounded up the most hated characters from sci-fi TV, the characters who’ve genuinely made us want to throw our remotes through our screens. Don’t say we didn’t warn you.

Charlie is the type of character who only survives because of blind, stupid luck. In the post-apocalyptic world of "Revolution," luck is not the kind of trait one looks for in fellow survivors. Alas, Charlie seems to thrive on it (because she’s clearly lacking common sense).

Never taking the sound advice of wiser, more world-worn Miles, continuously outing herself to the enemy, and generally always putting the people she loves in needlessly stupid situations makes Charlie the least capable person on the series; it’s no wonder she couldn’t carry it past season 2.

Bratty, pompous know-it-alls are good for one thing only in television: to die, and to give a series’ audience the validation that his/her death was truly deserved. Adric seemed to serve this purpose on "Dr. Who," being so completely unbearable that he became the first companion ever to bite it.

What did Shannon ever actually do on the island? Does anyone know? Sure, she looked good in a two-piece, but mostly she was just there to whine and provide background for Boone. Translation skills aside, we all clapped a little (OK, a lot) when she died.

Meg started off as a decent foe for the Winchester brothers – who could forget the first time we saw her make a collect call to hell using the blood of human sacrifice? – but by the time Rachel Miner took over the character in the fifth season, enough was enough.

Between her overly snarky attitude, her constant flip-flopping, and that weird whatever-it-was she had going on with Castiel, it was clear by the eighth season that Meg’s character had worn out her welcome. We were glad to see Crowley finally take her out.

It’s bad enough "Sliders" producers thought they could replace the lovable Wade Wilson in the first place, but to have said replacement be the "hot but tough" Captain Maggie Beckett was just insulting to fans.

The badass military girl who just needs a little love from a good guy to soften that icy exterior, Maggie was laughable at the best of times. At the worst, she was phony, one-dimensional, and entirely insulting to female fans (and military personnel) everywhere.

Finn didn’t appear on "Misfits" until the show was already in its decline, but that was no excuse for his character. He was creepy in that would-keep-a-girlfriend-bound-and-gagged-in-his-apartment sort of way. In fact, he literally did just that. And we were supposed to find him endearing?

The first iteration of Niki/Tracy/Jessica (“Tressiki?”) was boring AF to watch, and we were glad to see her go at the end of the second season. What we weren’t glad for was her subsequent resurrection as a different person.

Depending on the season, “Tressiki” either had blackout superhero murder powers or she could… freeze things? Because she was a genetic experiment and a weird conjoined-twin monster, we guess.

If you were to combine the douchiest douche bag with an overinflated sense of self and an overwhelming inadequacy in their field, Lee Sizemore would be the result.

Aside from being a conniving backstabber who nearly ruined Ford’s new narrative for his own ambition, Lee is easily manipulated by the smarter, more powerful people around him, which pretty much just makes him useless – in Westworld or any other world, for that matter.

Where to begin with Tess? As the hidden, fourth alien hybrid on "Roswell," Tess used her knowledge of the aliens’ past life history to manipulate Max and his friends, break up one of the greatest TV couples ever, then kill their best human friend by literally frying his brain.

But when Tess used her powers to seduce Max in a bid to get pregnant and deliver the child to his alien enemy on their home world, it was the last straw for viewers. We couldn’t have been happier when she got on that ship and flew away alone.

Connor may have been raised to be a warrior in a hell dimension, but he was actually worse than the average spoiled teenager who tells his parents he hates them just because they had the nerve to lay a hand on his prized My Chemical Romance CD. Angel clearly didn’t “get” him, and neither could we.

A traitor to his entire race, Gaius used his intellect and political influence to sell out every human in the Twelve Colonies to the Cylons for a hot piece of ass in a short dress. His presidency was even worse, as he signed the death warrant of hundreds of settlers. A douche move, gunpoint or no.

In the entirety of the series, Gaius went back and forth countless times between seeking redemption and trying to cover up his own disastrous mistakes. He was given chance after chance to better himself and make amends, and, by the end, it was just too exhausting to keep us interested.

Neelix is like the ALF of the "Star Trek" universe: He’s a little cocky, a lot annoying, and no one really knows why he’s there in the first place. Honestly, what did he do? Cook terrible meals? Act as Janeway’s (unwanted) personal assistant? Really, he was a black hole in an otherwise great series.

Ugh. Dawn. The human equivalent of writers’ block. What does one do when they’ve run out of storylines? They create a fully fledged character out of thin air to act as a bratty counterpart for the main protagonist.

No, we never were really supposed to like Dawn, the human version of the mystical Key sent to pose as Buffy’s sister for protection. But we really, really didn’t like Dawn, who wound up being the stereotype of every annoying younger sibling ever, only turned up to 1,000.