Movie Scenes That Will Always Give You The Chills

Sheila Watko
Movie Scenes That Will Always Give You The Chills September 25, 2017 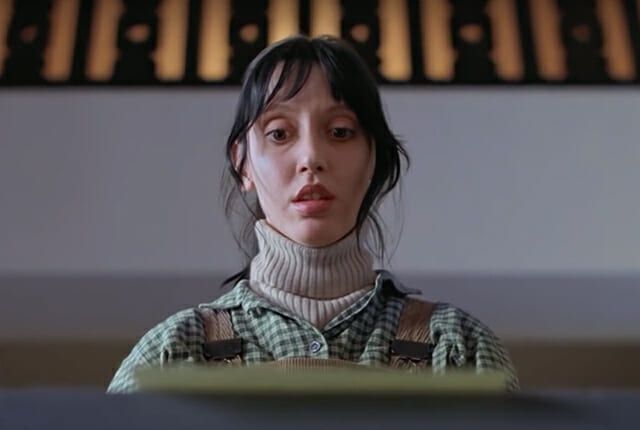 Do you ever gets chills during a movie scene? Maybe the moment is sad, maybe it's scary, maybe it's just really beautiful. These movie scenes are sure to give you chills all over every time you watch them. WARNING: spoilers ahead!

All Work and No Play (The Shining)

Stephen King's classic is full of chilling moments, from the flash of the twins murdered in the hallway to the naked woman in the bathtub to the favorite "Here's Johnny!" scene. Possibly the most terrifying, though, is the one that sets off the full climax of the film. Wendy slowly approaches Jack's typewriter to see what he's been working so hard on, only to find hundreds of pages of the same words written over and over in all different formations: "All work and no play makes Jack a dull boy."

Though it received a lukewarm reception by critics, Shutter Island is a memorable and chilling film. The scene when Teddy finds his children drowned by his wife is horrifying enough to send shivers down anyone's spine. Teddy stares in horror as she tells him, "Let's put them at the table. We'll dry them off, we’ll change their clothes. They'll be our living dolls. Tomorrow we can take them on a picnic.” The closing aerial shot of Teddy crying over Dolores’ body next to the children on the lawn… *goosebumps*.

Everything about this scene is eerie… maybe even more chill-inducing than the shark itself! The way Quint tells his story of being stranded in the water while his friends were picked off by hungry sharks, the way the single light in the frame flickers and sways as the boat rocks back and forth, and the fact that the sinking of the USS Indianapolis was a real event all add up for a truly unforgettable scene.

Let’s throw it back to the good old days. An elderly dog plus his loving boy plus the almost-death of a talking animal… just add uncontrollable tears! This whole scene is an emotional rollercoaster, starting with Chance running over the hill and Sally Field’s adorable Sassy voice. The kicker is when Peter realizes that Shadow probably didn’t make it home because he was too old. But then! The triumphant music! Shadow limps over the hill! This is one of the most heartwarming scenes in movie history and anyone who says otherwise has a heart of stone.

This scene will break your heart no matter how many times you’ve seen it. You can see how terrified Brooks is by the way he clutches the seat on the bus, feel his loneliness when he feeds the pigeons. His only smile is when he’s in his suit with his mind made up, carving his last mark on the world.

“You’ve got to stick to your principles.” (In Bruges)

The entire ending sequence of this movie is brilliant from the moment Harry foreshadows his own fate by claiming he’d kill himself if he ever killed a child. Ken sacrifices himself to save Ray. There is a moment of humor as both Harry and Ray decide not to hold their shootout in the pregnant woman’s hotel. Harry accidentally kills Jimmy and mistakes him for a child, and, holding true to his earlier statement, turns his gun on himself. Ray’s monologue as he is taken away and compares Bruges to hell, hoping to survive, leaves you with something to think about for days and viewings to come.

One of the most beautiful but lesser-known films of recent years, this movie has a touching message. The scene in which Mary says she wants a third baby and Tim realizes that a third child will mean he can never see his father again is very moving, followed by the day Tim breaks the news to his father and they relive a special day from Tim’s childhood.

Narcissa is lowkey one of the most badass characters in Harry Potter because at the end of the day, she DGAF about Lucius. She just wants to make sure her son is safe, and risks her own safety by declaring Harry dead so he can survive the Death Eaters. This scene leaves me shook every time.

The Final Game (Life is Beautiful)

Guido knows his fate, but his son is still hidden and they see each other. This moment is both sad and beautiful. He must keep the ruse of the game alive so Giosuè stays safely in his hiding spot, but he also knows that this is the last time he will ever see Giosuè again and wants to make sure that his final memory of his father is a happy one.

Movie Scenes That Will Always Give You The Chills

The sets, the music, the story that could have been – all of this is lovely, but the most beautiful part is that Mia and Seb are still happy in the paths they chose, because they realized their dreams. The tiny nod and smile, as if to congratulate each other, is what gives me the chills.

The Joker’s final scene and the moments leading up to it (the fake hostages!) are all goosebump-worthy, but the ferry scene is particularly spectacular because of the humanity of it. How desperate do people become when facing the possibility of death? What morals are they willing to sacrifice? Is a dangerous, convicted felon worth any less than an innocent child? Chills. All the chills.

Nothing tugs at the heartstrings quite like this one. As the toys slowly creep towards their doom, they stop fighting fate and realize that this is the end. Instead of panicking and trying any last-ditch attempts, they accept it and hold hands, staying strong for each other. Thank God the movie didn’t end with that scene because I really thought it would.

“My name is Inigo Montoya.” (The Princess Bride)

This movie is hilarious and nostalgic and quotable on so many levels, and Inigo Montoya is a fan favorite character. He says his catchphrase through the entire film: “My name is Inigo Montoya. You killed my father. Prepare to die.” But the realest moment in the entire movie also comes from Inigo during his fight with Rugen. When Rugen offers anything he wants as a deal in exchange for sparing his life, Inigo’s pain is palpable when he says, “I want my father back, you son of a bitch.”

This whole story is pretty deep, from the vast concept of the wormhole to the lasting love between a father and daughter. But the most concrete example of the wormhole is the first time we understand just how time differs on the different planets. Cooper and Brand return to find that Romilly has aged 23 years. He gave up sleeping when he thought they weren’t coming back to him.

As the old people lie together in their bed and the Irish mother in third-class tells to her children a bedtime story before they all die, we are tortured by yet another heart-wrenching scene as the Titanic slowly goes down. The gentlemen in the band decide to continue playing one last song together, and thank each other with the line, “Gentlemen, it has been a privilege playing with you tonight.”

Split was M. Night Shyamalan’s comeback film after a string of flops, and if nothing else, the ending was absolutely epic. If you never saw Unbreakable, you didn’t understand the twist and are sadly missing out. For M. Night fans, though, this was a fantastic, unexpected, perhaps even glee-inducing surprise that makes way for a sequel.

In a scene that gives you chills in the worst possible way, viewers learn that 15-year-old Sanford was forced by his uncle to assist in kidnapping and murdering about twenty boys around his own age. As Sanford, just a kid himself, confesses, he cries that he’s scared: “I don’t wanna go to Hell for killing kids!” The worst part of this is that the Wineville Chicken Coop Murders happened in real life. In a slightly happy ending to this horribly story, though, Sanford Clark ended up turning his life around. He was a WWII veteran, married for 55 years, adopted two children of his own and did work for multiple organizations. He wanted to prove that rehabilitation is possible and that convicted criminals can turn into productive members of society.

The newest film on this list is Dunkirk. The final scene featuring Farrier, the Royal Air Force Spitfire pilot, is stunningly shot and absolutely chilling in a beautiful way. Farrier runs out of fuel, but instead of landing and saving himself, chooses to shoot down the enemy planes and protect the men stranded on the beach at Dunkirk. As he shoots the last enemy down, he loses all fuel and the plane rides silently over the beach and the propellor is still and the soldiers below cheer for their hero.

In a tragically surprising twist, we learn that Robbie and Cecilia’s happy life together never happened. In fact, Robbie died in the war and was drowned when a water main burst and flooded her Tube station during a bombing. Briony wrote this ending for her book, in order to give them the happiness that she robbed them of.

“I’d circle the world for you two.” (Aquamarine)

Don’t hate if you’ve never seen it because this scene gives me chills and makes me cry every time. Before Frozen with its power-of-sisterhood message, there was Aquamarine, dropping knowledge about the true power of friendship. It’s simple and sweet and beautiful and should be required viewing for everyone.

This movie is an underrated gem, and my teenage mind was blown when I watched it on some cable channel one night in high school. Any father-child moment gets me right in the feels, and this entire movie is about a father and son trying to help each other. Time travel is always interesting if done well, and the time overlap in the climax of this movie is extremely well-done. When Frank shows up to save John from the Nightingale Killer, having been spared thanks to his son’s advice about both the fire and smoking… they’re not tears, someone must be chopping onions.

"Drink up me hearties, yo ho." (Pirates of the Caribbean: The Curse of the Black Pearl)

Any true Disney Parks fan got chills all over their body when Jack Sparrow, one of the greatest characters of all time, mumbled a few lyrics from the beloved ride (“and really bad eggs…”) before grinning and singing this classic line. Phenomenal ending to the excellent – but also the only decent – film in the Pirates franchise.

The ending of this movie is the warm, fuzzy kind of chills. It rips your heart out while also making you smile. It’s fantastical and joyful and sad and whimsical all at once, and it shows the power of make-believe and storytelling, as well as the power of love – romantic love, familial love and platonic love.

The final scene of Se7en is possibly the most chilling movie scene in modern film. The entire movie leading up the seventh sin is full of disturbing moments, in particular the absolutely spine-tingling glimpse of the Lust contraption. However, the lighting, the camera work (we never actually see inside the box – thank God), the harrowing music and the performance of all three actors make this especially horrifying and memorable. No one can forget Mills’ wrathful freakout over the contents of the box.