These Are The Coolest Spaceships In All Of Science Fiction

Jen Arbues
These Are The Coolest Spaceships In All Of Science Fiction September 14, 2017 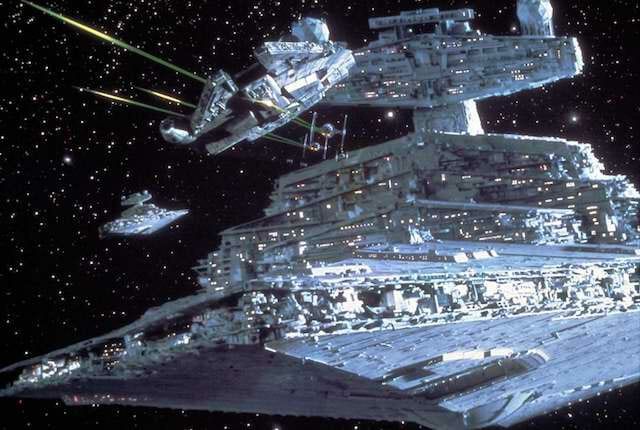 To boldly go… if we could do one thing in our lifetime, it would be to boldly go where any famous star traveler has gone before us. Sure, said travelers may have only gone to a sound stage and a VFX studio, but we can still dream, can’t we? And just because we’ve yet to see the dawn of actual space travel (we’re waiting on you, SpaceX), that doesn’t mean we can’t imagine ourselves aboard the greatest interplanetary — and, on a few occasions, interdimensional — fictional vessels ever imaged. These are the coolest sci-fi spaceships of all time.

This nuclear-powered craft was originally built to carry its crew to Jupiter, but extended its trip after HAL 9000, the AI designed to control its systems, began to malfunction in fun and interesting ways. It does boast a zero-gravity command module, which probably makes for a pretty exciting trip.

Featuring both space- and time-travel capabilities, the Doctor’s TARDIS is an all-in-one sci-fi craft that can blend into its surroundings perfectly. That is, if he could just get its chameleon circuit to work properly.

Designed by one of the most advanced races in the universe, the O’Neill-class ship is the most cutting-edge warship in the Asgard fleet. When the species responsible for humankind’s continued existence builds a warship, chances are it’ll be pretty unbeatable.

The O’Neill isn’t just massive in size, but it’s also aerodynamic, highly maneuverable, and fast, able to travel over 1200 lightyears in seconds.

Heart of Gold (The Hitchhiker's Guide to the Galaxy)

Three words: Infinite. Improbability. Drive. The Heart of Gold will get you anywhere, without all of that mucking about with hyperspace and what not, in a nothingth of a second.

Hey, remember those huge alien warcrafts that took out monuments across the globe with a single trained beam of energy? Yeah, the mothership is the one they all retreat to when they’re done.

At nearly 375 miles in size, it’s almost half of Earth’s moon and houses millions of Harvester aliens, all hell-bent on conquering the planet and stealing her resources.

There’s a reason the Death Star is called what it is, and that reason is its ability to destroy an entire planet with a single blast. But don’t let its moon size fool you; this Star Wars vessel has a class 4 hyperdrive, making it among the fastest starships in the universe.

The Death Star is also designed to house nearly 2 million personnel, on top of that whole creating-a-blast-that-rivals-the-sun’s-weekly-energy-output thing.

The Engineer ship stumbled upon by the crew of the Prometheus is completely unique in its design. An asymmetrical wishbone shape, the ship appears to be more biological than mechanical, an attribute we have H.R. Giger to thank for.

Perhaps the coolest part of the ship, though, is its massive cargo space, which is filled with hundreds of alien eggs. Brings whole new meaning to the idea of biological warfare, no?

Milano (Guardians of the Galaxy)

The Milano, named for Alyssa Milano, may not seem like much at first glance. A typical Ravager M-ship originally used for scouting and hunting, it’s its remarkable maneuverability and resilience in a fight (especially in Starlord’s capable hands) that makes it a standout among other spaceships.

How does the Galactic Empire keep its citizens in check? With a fleet of over 25,000 of these, that’s how. Their distinctive dagger shape is enough to strike fear into the heart of any rebel, but it’s probably their 1,600-meter length and 40,000,000-ton mass that they get their reputable name from.

This is a ship that started out as an exploration vehicle but soon turned into a living conveyor of pure evil. Using artificial black holes to travel between dimensions, it gained telepathic abilities along the way and used them to scare its entire crew to death in the most horrific ways imaginable.

Interstellar’s Endurance is built for a two-fold mission: to travel through a wormhole in search of a hospitable planet for human colonization; and to prolong crew life aboard while it searches for the 12 missing astronauts from a previously failed mission.

Its NASA design makes it self-sufficient for several decades, meaning its own crew would be able to survive beyond the proposed length of their mission, should anything go wrong. It also has a unique, ring-like shape, which enables it to produce artificial gravity. Because science!

The Serenity may not be much to look at, but it was put back together with the help of a fine crew, and it’s that old-fashioned, junkyard appeal that makes it home to Firefly’s small group of space cowboys, with or without extensive weaponry.

From interstellar cruiser to towing vehicle to Xenomorph burial ground, the Nostromo has seen a lot in its day. With two Rolls-Royce N66 Cyclone thrust engines at its disposal, it can haul pretty much anything, anywhere in the known galaxy, including entirely developed, man-eating alien species.

Sometimes, less technology is better technology. Having never been fitted with the latest and greatest computer network following its time in the first Cylon War, the Battlestar Galactica managed to survive the infiltration program designed to disable Colonial vessels during the Cylon attack.

As it transitioned from would-be war monument to civilian safe haven, the Galactica would become not only a formidable military foe against the impending Cylon takeover, but it would also act as the last hope for the continuation of the entire human race.

While we could have gone with the original Star Trek’s NCC 1701 model, it’s The Next Generation’s 1701-D that really deserves recognition here. Not only does it serve as a discovery vehicle and home to countless Starfleet officers, but it has seen more than its fair share of action.

It's survived attacks orchestrated by the Ferengi, Romulans, Borgs, and countless others, has made it through the first high-warp saucer separation, successfully traveled beyond warp 10 speed, and it's given us one of the greatest internet memes of all time. And for that, we are all thankful.

If there were any doubt as to this ship’s position on this list, just remember the Millennium Falcon has seen its way through the galaxy beginning more than 90 years before the First Order-Resistance conflict, through the Galactic Civil War, and on past the events of The Force Awakens.

It’s made the Kessel Run in less than 12 parsecs, avoided capture by a couple of Star Destroyers, and provided cover for Luke Skywalkwer while he successfully destroyed the Death Star. By staying power alone, the Millennium Falcon has every other ship in the sci-fi universe beat, hands down.