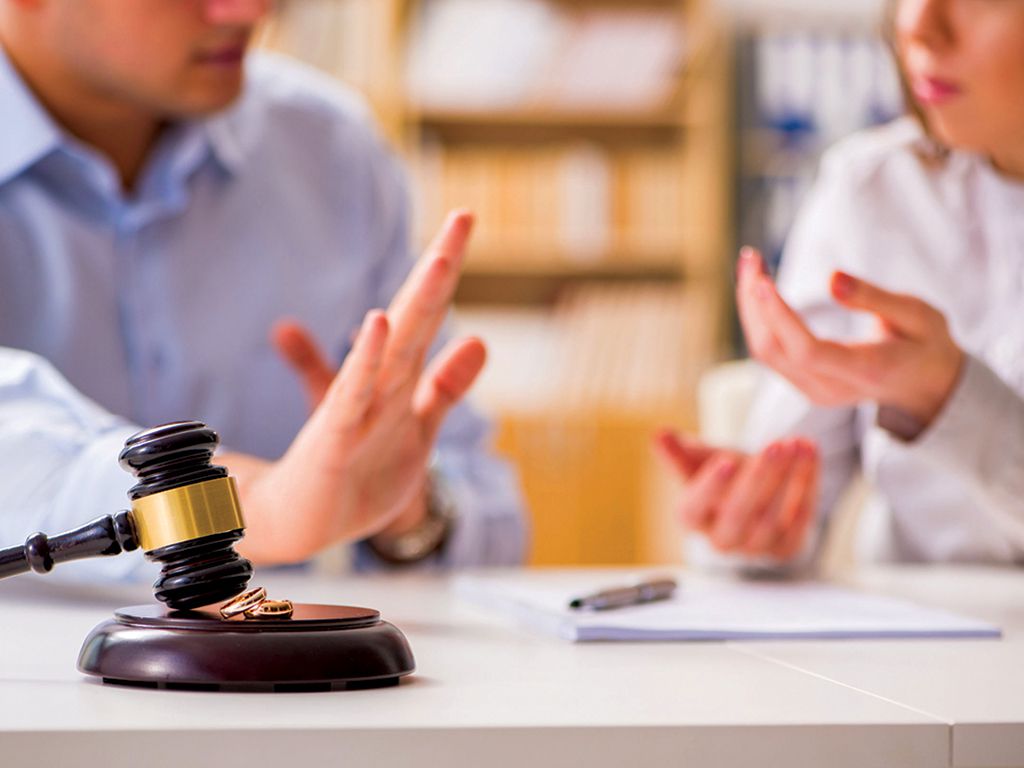 Divorces can get ugly pretty fast. Then again, it is the end of a marriage and not a ticker tape parade. In most cases, there’s a winner and a loser and the winner will let everyone know exactly what went down in the court room.

But the process can be a nightmare, and the drama isn’t always limited to court. Some of the nastiest things people have done during divorces happened in between court hearings...

The Dog Ate the Mistress’ G-String

The Huffington Post shared a story of a seemingly happy couple who got very concerned when their dog stopped eating, going to the bathroom and started dry heaving. So, they took the dog to the vet, and it underwent emergency surgery to remove a bowel obstruction. The vet found a red lacy G-string, which didn’t belong to the dog owner's wife. And the only positive outcome out of this was that the dog was okay.

An anonymous woman submitted her own story of love and heartache to Business Insider with permission by Joseph A. Davis of Fit Divorce Planning. She said, "In our less than seven-month marriage, my then-husband schemed and scammed between $60,000-100,000 from me." But that wasn't the only problem. "I'm about the fifth or sixth person he's scammed, and I got out pretty quickly," she added. And while she got out in time, she was left with a ton of debt. “I'm trying to save my credit and make payments while hoping I'll recoup some or any of my money through the legal system," she added.

She Put Their Dog Down

A former Reddit user shared his story about the time he had separated from his wife before they filed for divorce. She had agreed to look after their dog while he found a new place to live. But in a devious act, she took the dog to the vet and had it put down!

She Filed a Restraining Order Against Him

Another man submitted his story to Business Insider of the time his then-wife filed a restraining order against him. She also had the locks changed, but he didn’t know. So, when he got home, she called the cops who arrested him for violating the order. Turns out her lawyer told her to do that so he would get charged with a felony, which would guarantee she’d get custody of their kids under Tennessee law.

He Slept in a Bed of Broken Glass

A former Reddit user shared a story of a woman in the United Kingdom who was physically mistreated by her drunk husband. So one day, she had gotten so fed up that before she left him, she took all of his money. Then she stripped the mattress sheet off, put a full-length mirror on the bed and put the sheet over it. Then she smashed the mirror with a hammer and fixed the sheet so her drunken husband would lay on a bed of broken glass.

She Went to Court and Cited Abandonment

A woman named Mary Kate told her story to Business Insider about the time she filed for divorce after her husband refused to get treatment for his narcissistic personality disorder. "The turning point came after an episode of physical abuse; he sat down with our seven-year-old daughter afterwards and told her everything she had seen him do to me was my fault," she explained.

After three years of marriage, Denise Richards filed for divorce in 2005, claiming Charlie Sheen had physically assaulted her and cheated on her. Shortly after, Sheen left Richards a nasty voicemail. And while their divorce was finalized in 2006, Richards filed for an emergency court order in 2008 to stop Sheen from seeing their kids. She alleged that Sheen was behaving in a toxic and dangerous way in his home which could have a detrimental effect on them.

He Led a Double Life

According to Karolina Dehnhard, a divorce attorney, one of her clients was a doctor in a long-term marriage. But the husband, who was a resident of the United States and France, had a whole different life overseas. This led to their credit card bills mounting. And during the forensic accountant’s review of his bank and credit card records, it was discovered that the husband had another life and a girlfriend in France. But that didn't stop him from trying to fight his wife over the payment of medical treatment for their teenage daughter. In the end, the wife was awarded a six-figure credit from the husband’s marital estate.

Actors Alec Baldwin and Kim Basinger separated after seven years of marriage in 2000. They divorced two years later. But Basinger accused him of emotional and physical assault. Then came the bitter custody battle over their daughter, Ireland. Basinger had reportedly violated the terms of the visitation rights. But in 2007, things got worse when Baldwin left a nasty message for Ireland, who was only 11 at the time, because she had missed a phone call with him. When the tape was leaked, Baldwin temporarily lost visitation rights and the call went viral.

He Burned Her Wedding Dress

According to the Huffington Post, a husband chose to burn his wife’s wedding dress in the fireplace to let her know he wanted a divorce. Interestingly enough, she hadn’t done anything that would warrant such an overreaction like taking his money or cheating on him.

He Claimed He Had No Money

The Huffington Post shared a story of a highly successful construction worker who claimed he couldn’t pay spousal or child support. His excuse was that he had no money because he was saving for hip replacement surgery. But the Judge learned he had posted a selfie of himself with his girlfriend on top of a mountain he had hiked weeks earlier.

He Burnt the House Down

A former Reddit user shared a story of a couple who had been separated for 10 years, but didn’t legally divorce until a few years later. But to prevent her from getting the house, he burned it down and then faxed her the transfer of ownership forms. Given his actions, he faced arson charges.

He Wanted to Feed His Own Kids Only

Reddit user PM_ME_TINY_DINOSAURS shared a story their lawyer father had told them. It was about a husband who wanted financial compensation because he believed his ex-wife would use the food in the pantry to feed all of her kids, including her son from her first marriage. Only problem was, he wanted her to use the food he had purchased on his biological kids only. Fortunately, the judge gave him a good stare down, and he backed off.

He Hired a Hitman

A former Reddit user shared the story of their father who cheated on his wife, so their mother got custody of them. But the father didn’t like paying $2,000 a month in child support after giving up his rights. So, he hired a hitman for $15,000 to off his ex-wife. But life is stranger than fiction, and the hitman ended up being an undercover cop. Luckily for everyone involved, their dad got arrested in Toronto, Canada.

He Put Bags of Beef Throughout the House

A former Reddit user shared a story of a client who wanted to mess with their soon-to-be ex-wife, so he hid Ziplock bags full of ground beef in the attic, behind the water heater, in the air vents and various other places throughout the house. There were at least 30 bags hidden in the property, which took months to find.

In 2016, Angelina Jolie filed for divorce from Brad Pitt. It didn’t help that Pitt faced allegations of child abuse because of an incident with Maddox aboard a private jet. This led to a long, drawn out custody battle of the couple’s six children, but they finally came to an agreement in 2018.

A former Reddit user shared a story of a co-worker whose wife racked up a credit card debt of over $150,000 before she divorced him. So, he had to work grueling extra hours just to survive. Sadly, the stress got to him and he passed away from a heart attack.

She Suffered Emotionally From the Process

Lydia Vowden, from Exeter, United Kingdom, left her husband in 2016. But it took over two years to finalize the divorce because in England and Wales, divorce proceedings only start immediately if adultery or unreasonable behavior is a factor. So Vowden struggled financially and was emotionally distressed over making the horrendous legal process finally dissolve her marriage.

In 2016, Amber Heard filed for divorce from her husband Johnny Depp. She accused him of allegedly getting physical with her and got a temporary restraining order against him. She also requested spousal support but withdrew the request. Meanwhile, Depp and his lawyer have denied Heard’s accusations and have been working hard at trying to restore Depp's status in Hollywood.

They Spat at Each Other

Reddit user Triptohamburg worked for a judge and shared a story of two local news people who filed mutual restraining orders during their divorce. But it turns out that what they called acts of violence towards each other was nothing more than spitting at one another during a bad argument. The judge denied their requests for restraining orders.

He Spent $2 Million on His Girlfriend

Todd Spodek, a managing partner at Spodek Law Group in New York, shared a story of a husband and wife who were indicted for stealing the identity of licensed doctors to submit invoices to various companies in exchange for reimbursements of supplies that never existed. "The husband used his portion of the profits, nearly $2 million, on his girlfriend. His wife found out," he explained.

He Refused to Return Her Child

Lisa H. Meyer, a founding partner at Meyer, Olson, Lowy & Meyers in Los Angeles, California, represented a longtime friend of hers in a child custody dispute full of bitter feelings. "Worse, the judge seemed set against us at every turn," she explained. Her friend’s ex had refused to return their child to her for the Passover holiday. But fortunately, they had a Jewish judge who ruled against the ex-husband and also threw him in jail for five days.

She Blamed Her Ex for Child’s Bad Grades

Anne Mitchell, a lawyer in Boulder, Colorado, had a client who got divorced, remarried and had a child in middle school. Her client had been divorced for a long time from his ex. But when the report cards came out, his ex-wife showed up at his doorstep and blamed him for their son’s grades. Then she punched him in the face and filed an emergency restraining order, which wasn’t granted to her.

They Prioritized Money Over Their Child’s Future

Reddit user BCECVE shared a story of a couple who refused to sign off on an education check for their child. The reason for that was that they believed whoever signed off first could just cash in the money and use it on themselves instead of on the child. But the check was only for $5,000 and it sat on a desk while the legal battle ensued for two months.

He Named His New Dog After His Ex-Wife

A story shared on Reddit explained the bizarre choices of one man who was surprised when his ex-wife built a house next door to him. "In the divorce, they split everything 50/50, including the land that the house they lived in sat upon," explained the Reddit user. "Well she decides to build a house right behind the other house, so that the back of the houses faced each other." The divorced man then, much to his ex-wife's dismay, got a puppy and named it Susan, so he could yell and scream at his ex-wife all day within earshot of her house and she couldn't legally do anything about it.