The 20 Best Crime Series On Netflix 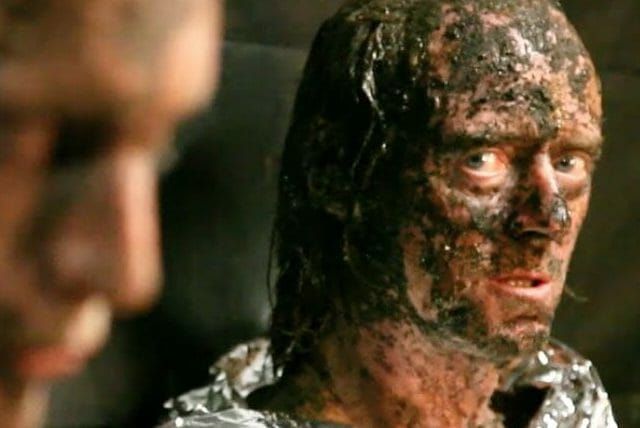 I, for one, am so thankful that American culture has finally embraced its own love of murder. All hail crime shows on Netflix! Television about death and mystery is an unstoppable source of entertainment for all kinds of audiences. Whether it's a basic network procedural or a British miniseries, folks can't get enough of a good murder. A good portion of the content out there happens to be British – I'm not really sure what that says about the Brits – but the rest of the world has stepped up in recent years and put out some pretty decent shit. Perfect for a weekend binge, some familiar comfort, or simply a good scare, these are the best Netflix murder shows to keep your roommate on good behavior. After all, you clearly have experience in matters involving arsenic and knifeplay.

The Gillian Anderson star vehicle The Fall is dark af, y’all. I mean, unless you’re capable of handling some very heavy and sadistic rape-torture-murder shit, steer clear. But if you can handle it, then you’re in for a treat. Anderson’s Stella Gibson is a multifaceted queer icon, and I dare you to show me anyone at all who looks hotter than Stella in a silk blouse.

First off, I don’t want to hear anything at all about the American remake of Broadchurch. I don’t remember what it was called and I certainly don’t care to. It’s simply superfluous when compared to the original, a moving examination of a child’s murder in a small coastal town simply chock full with complex and emotionally evocative characters. David Tennant kills it, obvi, but the rest of the cast is no less talented. Although it’s not on Netflix, the producers created a show called Mayday last year that is equally creepy and great.

A recent addition to Netflix, Collateral drew me in because it stars Carey Mulligan, who I would watch in absolutely anything. But immediately the show drew me in on its own merits. After a Syrian refugee pizza guy is shot to death for seemingly no reason in London, the investigation and the lives of the people involved in it reveal the myriad complex and heartbreaking issues surrounding current British immigration politics. If you’re looking to understand the impact of Brexit and Theresa May on average Brits, Collateral is the (highly engrossing) way to do it.

There isn’t actually too much actual murder in Happy Valley, but there sure is a hell of a lot of other fucked up shit. The scenery is beautiful but the family dynamics are whack. While the badass lady copper is taking care of business, people do get murdered and punched in the face. But hey, it’s Happy Valley!

Midsomer Murders is my favorite show. It’s been running for 20 years and is simply the best. The main character is a detective named Tom Barnaby, and he solves the vast, endless array of countryside murders that take place in the fictional county of Midsomer with a rotating cast of adorable, hapless sergeants who never quite seem to be able to figure out the murders quite like Barnaby can. It’s silly, light, and perfectly British.

Although Netflix doesn’t have the new rebooted Showtime Twin Peaks, who gives a fuck? The original stands the test of time and you all very well know it. David Lynch’s work is so jam-packed with mystery that you can rewatch Laura Palmer’s murder case again and again and find something new to ponder every time.

Kind of a reverse murder mystery, Glitch is a wonderfully weird Australian show about a group of people in a small island town who inexplicably come back from the dead. Not all of them were murdered, but those who were are given a chance to solve their own - even after hundreds of years. And in the meantime, someone is trying to kill the newly risen folk so there’s THAT to figure out.

David Fincher has made a wide range of interesting and important films, but he truly shines when it comes to serial murder. Se7en, Zodiac, and now Mindhunter all delve deep into not just the act of murdering, but what it psychologically means to be a serial killer. In Mindhunter we learn the origin story of the now-instinctual way we talk about these remarkable monsters, and get some sweet ‘70s costuming while we’re at it.

Part dark Swedish comedy, part rural British murder show, Fallet is the type of program that kind of defies explanation. Sometimes it can be hard to go hard on a full-blown foreign language show, but Fallet is about half in Swedish and half in English, and the Swedish bits are often the funniest. If you’re into Stieg Larsson with a fun, chummy twist, this is the show for you.

Featuring a fantastically sexy cast, The Five is about four adults having to deal with the the murder of their childhood friend so many years later. As the mystery thickens and unravels, there are more murders to worry about, more secrets to reveal, and more hard truths the friends have to face. The Five was created by crime novelist Harlan Coben in his first series written for television, which is probably why it manages to have such a satisfying conclusion.

If you haven’t discovered Benedict Cumberbatch’s Sherlock, I’m not sure who you are and what sheltered life you live. But well-loved or not, there’s no denying that this masterful adaptation remains one of the best murder mystery shows on Netflix. The episodes may be more about the man himself than the crimes he solves, but if anything that’s what makes Sherlock stand out from a crowd.

There are plenty of crime procedurals featuring a medical examiner who solves homicides. But iZombie is the first one where the doctor in question eats her patients’ brains to get insight into what happened to them. Campy and creepy, the show has withstood the fading of the zombie fad and given us more greatness from brilliant Veronica Mars and Party Down showrunner Rob Thomas.

Retribution is about (at least) three murders. It begins when a newlywed couple is slashed up for no apparent reason, and then the man who murdered them is also killed. Set in rural Scotland, the show is worth watching for the scenery alone. The cast is absolutely stellar, and Retribution quickly turns into a locked-room mystery set in the vast Scottish mountains and valleys - it’s dramatically and visually stunning.

Yes, okay, so they kill a dog in the first episode. But nothing makes up for the bummer of a dead dog like Idris Elba’s gorgeous tortured face all scruffy and thoughtful-like. He solves murders, he befriends serial killers, he breaks all the rules - he’s Luther, man.

With all the hubbub around Hulu’s adaptation of The Handmaid’s Tale, this other Margaret Atwood adaptation didn’t get as much heat. Based off of Atwood’s fictionalized retelling of the circumstances around two actual gruesome murders in 19th century Toronto, Alias Grace is a sizzling story that grips you spiritually and visually. Helmed by fave Sarah Polley and with plenty of guidance - and a cameo - from Atwood herself, this short series shows us the true, mysterious heart of a celebrated murderess.

Oh, this one is good. Part murder mystery, part haunted mansion ghost story, Requiem is about a girl who finds way more than she bargained for when she begins digging into the reason for her mother’s unnerving and unexplained suicide. Like the name suggests, the music in the show is fantastic, as is the mise-en-scene. If you’re into spooky-type horror, Requiem’s for you.

Is Criminal Minds the best show out there? Nah man, it def can’t hold a candle to, like, OG Law and Order. But I got back into Criminal Minds after watching Mindhunter - Mindhunter is about the founding of the FBI’s Behavioral Analysis Unit, and Jonathan Groff and Mandy Patinkin play essentially the same person. Aside from all the cool serial killer shit, my favorite part is that everyone in the BAU are hardcore BFFs. Friendship is an important part of behavioral analysis, man! You’ve got to know who you can trust.

Any fellow MacFayden heads out there? Oh, I know there gotta be. So this is Ripper Street. Dapper coppers solving murders in Victorian London? Hell yeah. Jerome Flynn - Game of Thrones’s own Ser Bron - spices up the cast. There’s not too much complexity here, but there’s a hell of a lot of murder, hotness, and highfalutin fun.

I’ll admit that I fell off watching Bates Motel after the first few seasons, but that doesn’t mean it’s not a terrific show. Murder runs as an undercurrent throughout everything - Freddie Highmore is absolute perfection playing the monster we know Norman Bates will become. Sexy, twisted, and somehow surprising, Bates Motel is a truly worthwhile reimagining.

Yeah that’s right, it’s so good it’s on here twice. So after season 13, Tom Barnaby retires and is replaced by his crime psychologist cousin, John Barnaby. My favorite Detective Sergeant Jones sticks around for a while, and there’s a superbly adorable dog named Sykes. Also around this time the producer, facing charges of racism, got switched up and so in the more recent seasons you’ll see way more people of color and a more accurate representation of rural England.