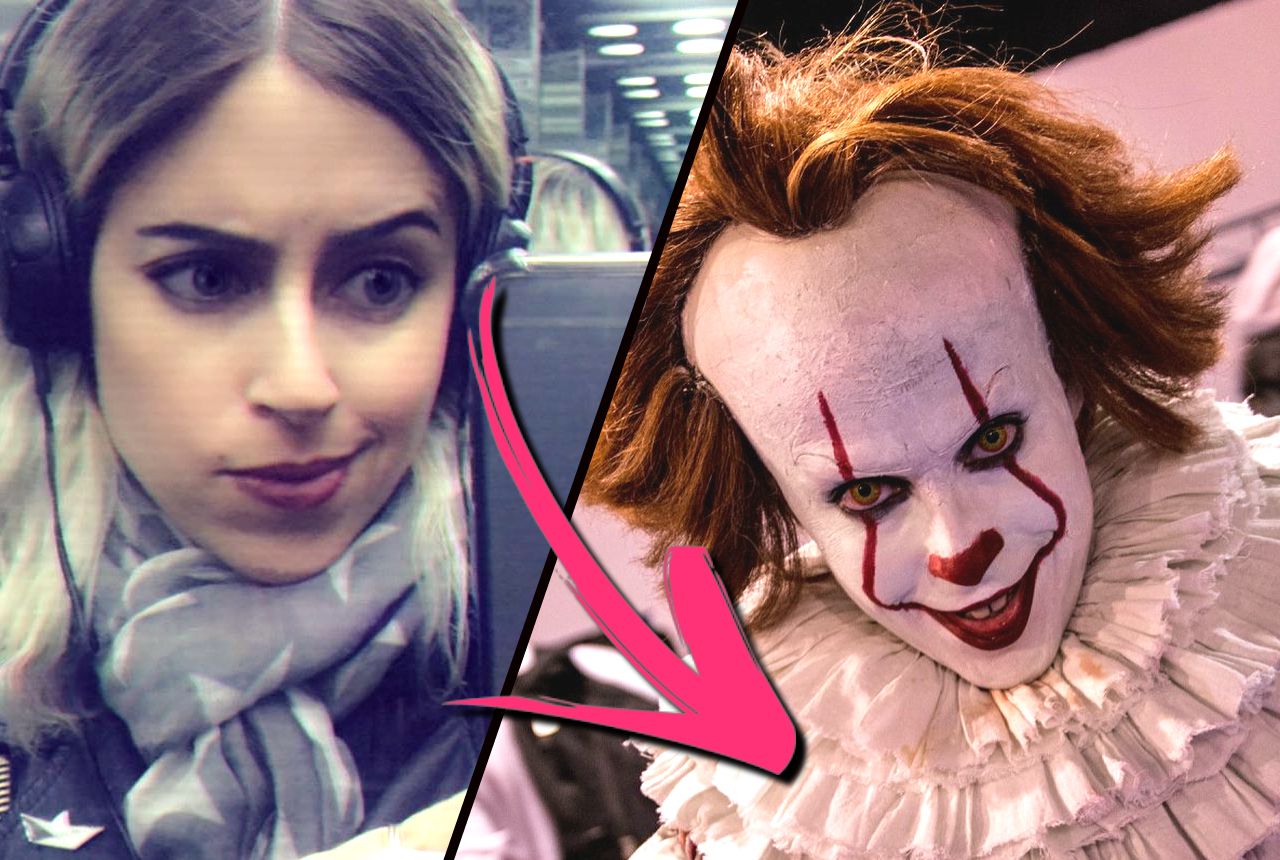 Playing dress-up isn’t just reserved for Halloween or a kinky night with your S.O. anymore. If you’re looking to truly embody your favorite fictional character, the world of cosplay is where it’s at. It’s an open door to the imagination. Whatever you want to be — from video games to movies to manga — it's all possible. All you need is a little time and some creativity. But even though you might think you can get away with a store-bought, official-license getup, I'm sorry to say you’re dead wrong. Because exact replica cosplay costumes are serious business. We’re talking scratch patterning. And high-tech fabrication. And while we certainly can't do it, these are some of the best cosplay pros traveling the con circuit today who absolutely can.

But wouldn’t you know it, Tabbitha can also do a number of female characters. She’s maybe best known for her Attack on Titan cosplay, but most recently, she’s transformed herself into Wonder Woman, and goddammit if it isn’t absolute perfection. She could 100% be mistaken for Gal Gadot’s twin.

[dx_custom_adunit desktop_id="RTK_K67O" mobile_id="RTK_5yk0"] With an Instagram following of nearly 700k, Alyson Tabbitha has proven to be quite a heavy-hitter in the cosplay world. It’s no wonder why. She can literally make herself into any character, but she seems to have a soft spot for those played by Johnny Depp, especially Edward Scissorhands or this ridiculous Jack Sparrow.

Mark Robards is clearly a comic fan. If you’ve been around the convention circuit, you may have run into him dressed as Deadpool or Red Hood or Gambit. But his Dark Knight cosplay is one of the best we’ve ever seen, which is probably why he’s so well known for it.

Jessica Herrlein is an FX makeup artist from Argentina who’s been cosplaying with her husband for over five years. The two of them have done a number of really rad looks, including a spot-on Suicide Squad Harley and Dark Knight Joker. But Herrlein’s Pennywise is so good that it actually gives us nightmares.

[dx_custom_adunit desktop_id="RTK_K67O" mobile_id="RTK_5yk0"] One of the coolest aspects of cosplay is the ability to make up original characters that live in an established geek world, or to create mashups of your favorites. Instagram’s Boobiefett did just that with her Gwenom cosplay, a mix of comic characters Spider-Gwen and Venom. Because not everything has to be about Peter Parker.

A lot of shit gets thrown at the cosplay community for its sexualization of female cosplayers. And sure, the criticism isn’t without some merit. But f— all of that nonsense, and check out Michael Huffman, who spends most of his time on the convention floor shirtless. There isn’t a better Gambit cosplayer out there, and our 10-year-old selves can’t handle it.

Wolverine (and all his mashups) — Lonstermash

Lonstermash is a cosplayer and personal trainer who also happens to be a dead ringer for Wolverine. Which is probably why he’s so good at playing him, in whatever form he feels like doing. Easter season? Enter Logan Cottontail, with carrots for claws. Or maybe you’re more of a Star Wars fan… check out his Jedi Master Logan, complete with lightsaber claws.

[dx_custom_adunit desktop_id="RTK_K67O" mobile_id="RTK_5yk0"] If you’re going to have anyone put together something like a Cable cosplay, a legit Army veteran is probably going to be your best bet for authenticity. Thom Cruz (“pronounced like the actor”) has put real work into his props. Like his flash bang grenades that can be detached like real grenades. They’re also probably not something he’d want to wear to the airport.

Not only is Paul Star Hero’s Deadpool cosplay ridiculously well-done, but the guy is also a volunteer for the goddam U.K. Make A Wish Foundation. He makes comic fans and children happy on a regular basis. We may have actually found the greatest cosplayer on the planet.

We love us a good gender swap, particularly when it comes to characters that are generally portrayed as ultra-masculine. Sometimes, the comic world delivers it for us (She-Hulk, Lady Thor). Other times, we have to rely on the ingenuity of people like Momokun to create phenomenal female versions of male comic characters. Who needs Ron Perlman anyway?

[dx_custom_adunit desktop_id="RTK_K67O" mobile_id="RTK_5yk0"] Prizmatec is a family of cosplayers that specialize in giant, lightweight mech designs. They’ve created a bunch of different Iron Man suits, along with stuff from plenty of other fandoms (like Reinhardt from Blizzard’s Overwatch). But their Thanos cosplay is completely out of this world, and way better looking than his first big screen appearance.

Retroresource is another family-run mech cosplay group. Mike Carambat created the D.Va mech suit for his daughter to wear for 2017’s Mechacon. It’s almost entirely built from household products, too, so the next time you see a giant mech on the convention floor and think about how impossible it would be to build yourself, just remember you’ve got plenty of toilet paper rolls at home. That’s how it’s done, right?

Extreme Costumes is the mech cosplay company all other mech cosplay companies strive to be. Guaranteed, you’ve seen their giant Bumblebee robot costume at some convention over the last year. But we’re a fan of this Hulkbuster even more, maybe on account of how chill it looks just sitting there, waiting to strike up a friendly conversation over coffee. Or oil, or whatever.

[dx_custom_adunit desktop_id="RTK_K67O" mobile_id="RTK_5yk0"] Cosplay isn’t just about costume creation. There’s an entire world of makeup gurus devoted to the geek life, too. Queen of Luna is one of the best makeup cosplayers, and she’s got a 415k Instagram following to prove it. You name it, she can transform herself into it, but she’s especially fond of taking on classic Disney characters.

Speaking of Disney, can we just take a moment to appreciate the level of craftsmanship that Joo Skellington puts into his cosplay? An FX makeup artist, Joo specializes in plastic and prosthetics, having convincingly turned himself into nearly every Disney villain from our childhood. But his Ursula definitely takes the over-the-top, based-on-a-real-drag-queen cake.

Libbey June is a 19-year-old cosplayer from Ohio who specializes in anime and gaming. Actually, she’s covered at least one thing from pretty much every entertainment avenue out there, but we’re kind of partial to her video game work. Especially this version of Ellie from The Last of Us, which may or may not be the greatest game ever created (it absolutely is).

[dx_custom_adunit desktop_id="RTK_K67O" mobile_id="RTK_5yk0"] If you were to combine all the elements of cosplay — makeup, prosthetics, original costuming design — and roll them up into a single package, you’d get J Stryker. The guy has done Disney princes, video game characters, and comic idols. And if you’re a fan of cartoons (especially those on FXX), he’s got the art of cel-shading down to a goddam science.

Link is one of those characters that has been cosplayed to death. To be honest, we could probably go the rest of our lives without seeing another Link on the con floor. Unless it’s done by J Stryker. Then we might actually wind up following him around for hours. Like Navi, only more annoying.

A lot of the cosplayers on our list may be fairly unknown. Jessica Nigri is not one of those cosplayers. At nearly three million Instagram followers, Nigri is by far one of the most famous in the world. Her cosplay of Elder Scrolls’ Aela the Huntress is certainly one of her best, and she’s got the wolf (a real f—ing wolf) to prove it.

[dx_custom_adunit desktop_id="RTK_K67O" mobile_id="RTK_5yk0"] So this isn’t exactly cosplay, but goddammit, it deserves to be seen by the world. For those that aren’t aware, Josh Brolin (today’s Thanos and Cable) played a little part in a little movie in 1985 called The Goonies. Maybe you’re too young to know the joy of said film. Maybe it’s time for a rewatch. Because Josh Brolin has since taken his famous Goonies character out of retirement. So it was for one night only; that doesn’t mean we can’t carry hope for a future appearance.