When Jumbo-Sized Athletes Break The Mold And Do The Unexpected 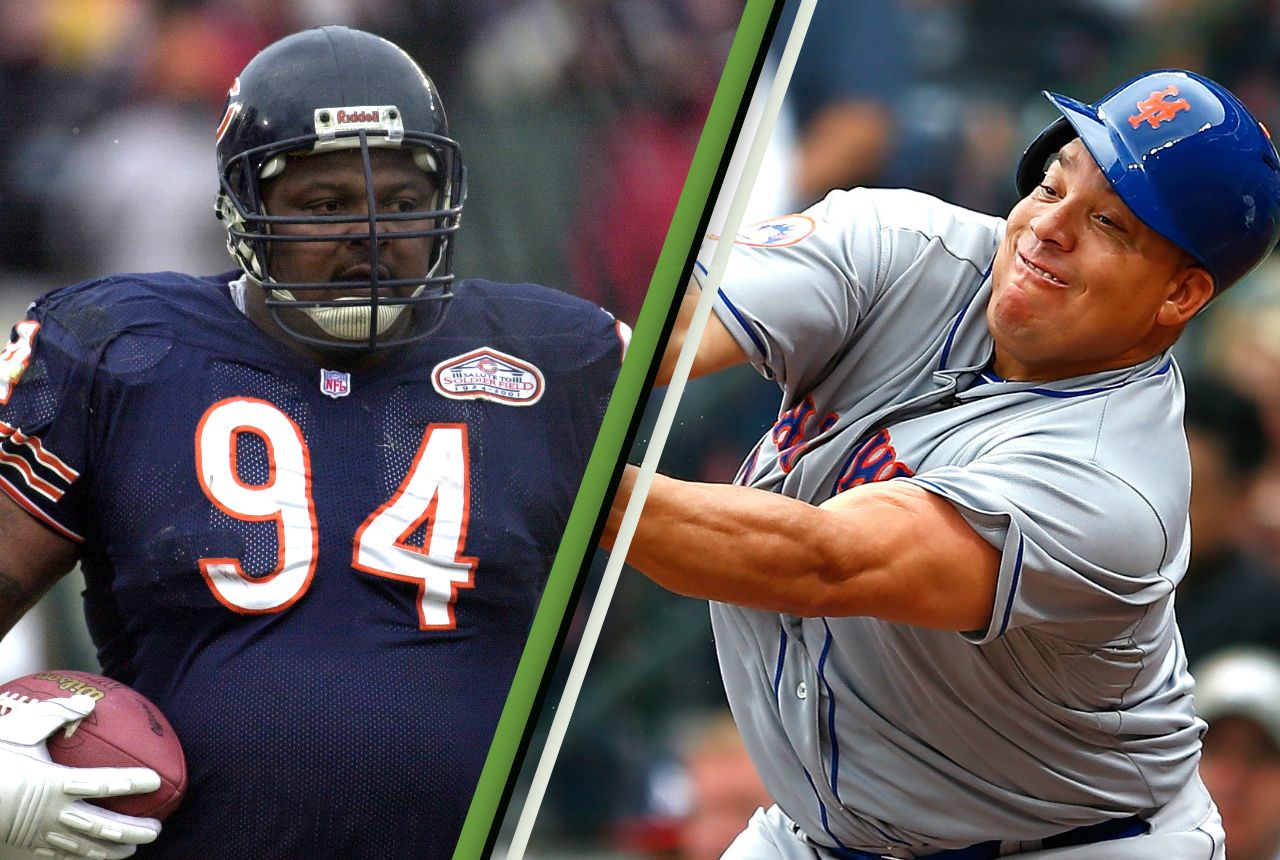 Larger-than-life athletes revel in showing there's more to their games than sheer size. And sports fans might enjoy such flashes even more than those outsize athletes do. So check out our collection of the most unexpected plays from sports' biggest (literally) competitors.

The Fridge plays running back

Beastly defensive tackle William "Refrigerator" Perry recorded 506 tackles and 29.5 sacks in his 10-year NFL career, but the Fridge is best remembered for his stints at running back in short-yardage situations. The most memorable of these came in Super Bowl XX, when he punched in a one-yard touchdown to make the score 44-3.

[dx_custom_adunit desktop_id="RTK_K67O" mobile_id="RTK_5yk0"] Even before he ballooned from a lean, Cy Young-winning machine into a lovable round innings eater, Colon was hopeless as a hitter. But he finally poked one out of the park on May 7, 2016, on the road against the Padres at the age of 43, sending his teammates into hysterics. Before 2016, he owned a slash line of .093/.100/.102.

The 6'7", 308-pound left tackle was in the midst of his 13th NFL season when he was finally targeted in the passing game for the first time. His three-yard score in the final minute capped off a 23-point Jets comeback in the final period against the Dolphins on October 23, 2000. New York would win in overtime in what's now known as the Monday Night Miracle.

Shaq flashed his handles at the 2007 NBA All-Star Game, at one point bringing the ball up the floor, putting the ball between his legs, and trying to take Mehmet Okur off the bounce. The handle looked pretty tight, but he clanked his midrange pull-up, sending Carmelo Anthony rolling onto the floor in laughter.

[dx_custom_adunit desktop_id="RTK_K67O" mobile_id="RTK_5yk0"] The 346-pound nose tackle rushed for a one-yard touchdown in 2015, then ran for another score in Week 5 of 2016. So when he lined up to receive the ball in wildcat formation in a Week 16 blowout, the Broncos were expecting the run. Instead, Poe stopped short of the line, leaped, and found Demetrius Harris for a touchdown pass.

The tallest player in NHL history became the tallest to record a hat trick. The 6'9" defenseman's three-goal game came in a 7-0 blowout of the Hurricanes on January 17, 2011. His second and third goals came on the power play, where his hard slapshot has always been an asset, but the first goal was the result of the rare Chara-led break down the ice.

With seconds remaining in the first half of Super Bowl XLIII on February 1, 2009, Harrison intercepted Cardinals quarterback Kurt Warner on the Steelers' goal line and carried the ball 100 yards to the house as time expired. "To be honest, I really didn’t think I’d make it all the way back," the enormous linebacker said after the win. "My teammates threw some vicious blocks."

[dx_custom_adunit desktop_id="RTK_K67O" mobile_id="RTK_5yk0"] More than two years after Kobe Bryant set the record for threes in a game at 12, the mark was tied by an unlikely source: Marshall, by then a beefy Raptors power forward, on May 13, 2005, just days shy of his 32nd birthday. Stephen Curry would tie the record in 2015-16, then break it by hitting 13 in a game a season later.

LaQuan McGowan in the Cotton Bowl

The 6'7", 410-pound behemoth played all over the offensive line during his career at Baylor, including some time at tight end. The most memorable of his three career touchdowns came in the Cotton Bowl on New Year's Day, 2015, when he was just a mere 390 pounds and rumbled for an 18-yard score against Michigan State.

Bengie Molina hits for the cycle

The veteran catcher had an improbable day on July 16, 2010. His grand slam in the fifth was just his second homer of the season, and he found himself a triple shy of the cycle — an unlikely feat considering his dimensions. Thanks to a misplay in center field and a generous scorekeeper, a breathless Molina completed the cycle in the eighth to the delight of his teammates.

A day of firsts for Kyle Williams

[dx_custom_adunit desktop_id="RTK_K67O" mobile_id="RTK_5yk0"] The defensive tackle was drafted in 2005, but would go over a decade before finding the end zone or a playoff berth — then he got both on the same day, in Week 17 of the 2017 season. He rushed a touchdown in from the one-yard line against the Dolphins, sealing a victory that propelled the Bills to their first postseason trip since 1999.

Trailing by three with seconds remaining in overtime of Game 1 of the Spurs' meeting with the Suns in the first round of the 2008 playoffs, Gregg Popovich drew up a play that resulted in his big man's spotting up wide open for a game-tying three. The seven-footer nailed it, and the Spurs went on to win in the second overtime period. Duncan only took 168 regular season three-pointers in his career, hitting just 17.9 percent of them.

The hefty defensive tackle picked off Jaguars quarterback Mark Brunell in Week 17 of the 2007 season. The Bears big man somehow managed to break away from the pack, and darted 67 yards down the sideline, visibly considering a lateral before finally getting dragged down yards shy of the end zone. He also had a 62-yard pick return for a touchdown in 1997.

Manute Bol goes off from deep

[dx_custom_adunit desktop_id="RTK_K67O" mobile_id="RTK_5yk0"] The 7'7" shot-blocking specialist hoisted the occasional three-pointer, though his coaches probably wished he was a bit shyer about launching from deep. Bol connected on just 22 percent of the 205 threes he attempted in his career, but he was on fire from long range on March 3, 1993, hitting six three-pointers in the second half of a loss.

J.J. Watt shows off his hands

Watt claimed one of his three Defensive Player of the Year awards (as of this writing in 2018) in 2014, but the defensive end also found the time to score four touchdowns that season, three of them on offense. None were more impressive than this grab with Browns linebacker Christian Kirksey draped all over him in the first quarter of a 23-7 Texans victory.

Darion Conner thought he had a pick-six in the second quarter of his Saints' Week 16 game against the Cowboys in 1994. But he didn't take into account 325-pound offensive lineman and future Hall of Famer Larry Allen, who stunned the broadcast booth by chasing down the linebacker 56 yards from the spot of the interception.

[dx_custom_adunit desktop_id="RTK_K67O" mobile_id="RTK_5yk0"] With his Patriots trailing by 10 just shy of the first half's two-minute warning in Week 15 of the 2010 season, the versatile offensive lineman fielded a squibbed kickoff and broke through a pack of Packers. He made it 71 yards before being dragged down just shy of the end zone. His team would score a minute later and go on to win 31-27.