The Best NBA Finals Teammates LeBron James Has Ever Had 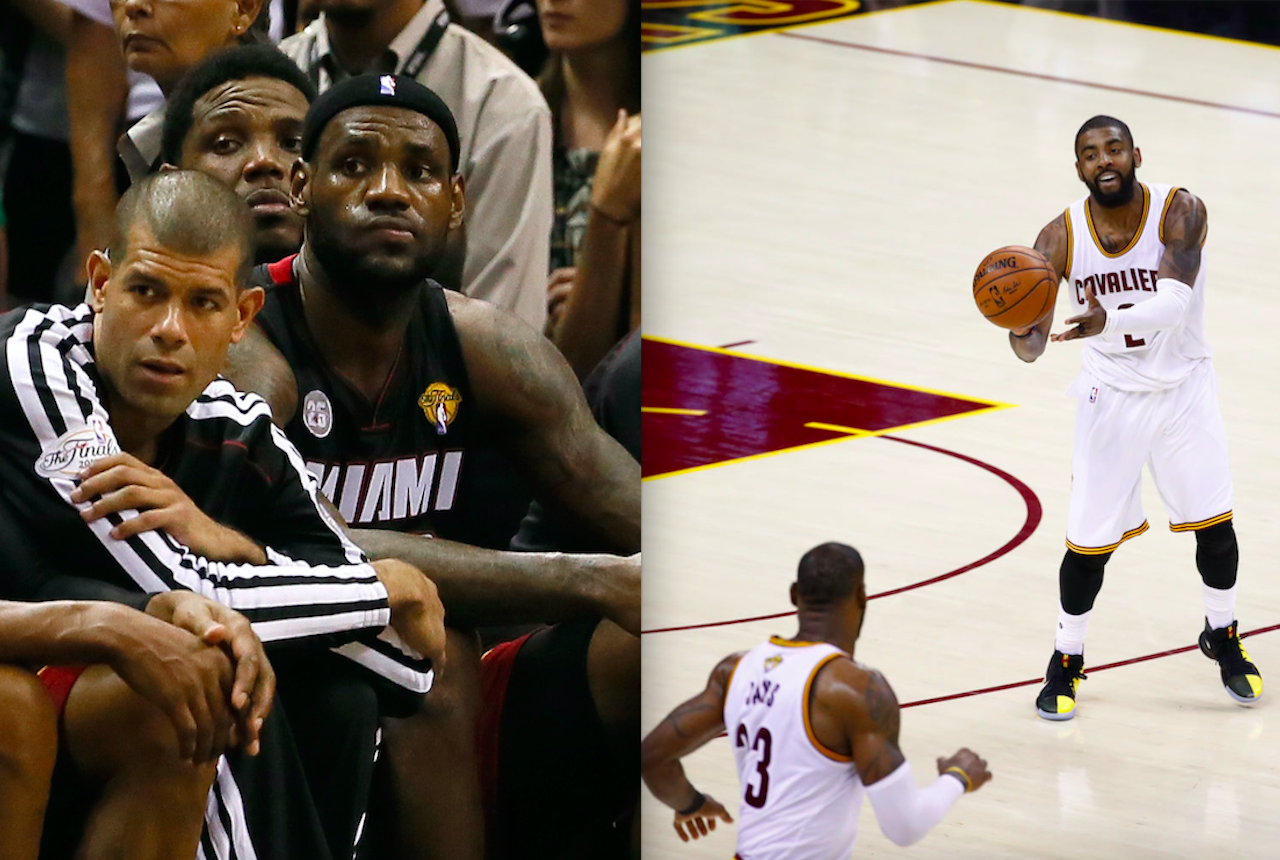 Following the Warriors' waltz past the Cavaliers in the 2018 NBA Finals, LeBron James has been to nine championship rounds in his career. And eight in a row. And he dragged a lot of dead weight with him. Like Kendrick Perkins, Iman Shumpert, and just about everyone to suit up for Cleveland in 2006-07. But, fortunately for him, he had his share of stars to pass the rock to. And pretty soon, he may have a whole new set of elite players to share a locker room with. Here's our rankings of LeBron's best NBA Finals teammates as of the 2018 offseason.

The sharpshooter spent three seasons at LeBron's side, falling to the Mavericks in the 2011 Finals and winning titles in 2012 and 2013 over the Thunder and Spurs. In 58 games over those three postseasons, Miller shot 39.2 percent from deep and wasn't shy about hoisting them, taking 6.5 three-pointers per 36 minutes.

[dx_custom_adunit desktop_id="RTK_K67O" mobile_id="RTK_5yk0"] LeBron loves his vets, and when he joined the Heat he got one in Udonis Haslem, who'd won a ring with Dwyane Wade in 2006. Haslem was there for all four of LeBron's Finals runs in Miami from 2011 to 2014, saving his best postseasons for the championship years, 2012 and 2013, when he averaged 4.9 points and 5 rebounds across 44 playoff games, playing 18.4 minutes per contest.

Andersen spent the second half of LeBron's Miami stint providing the team with valuable rim protection and finishing off the bench. He led the 2013 postseason in field-goal percentage, converting 80.7 percent of his field goals while averaging 6.5 points, 3.8 rebounds, and 1.1 blocks per game during the championship run.

The midseason acquisition of Hill wasn't enough to push the Cavaliers over the top in 2017-18, but he took care of the ball, spaced the floor, and provided competent defense on a team starved for anything resembling it. Fortunately for him, his missed free throw late in Game 1 of the Finals was overshadowed by J.R. Smith's infamous blunder.

[dx_custom_adunit desktop_id="RTK_K67O" mobile_id="RTK_5yk0"] Pavlovic had a career year in 2006-07, when the Cavs ended up getting swept by the Spurs in the Finals. During the regular season he averaged nine points per game, the fifth-highest mark on the team, and knocked down 40.5 percent of his three-pointers, all while turning himself into a decent perimeter defender.

Early in his journeyman career, during which the Kansas alum played for 11 NBA franchises, a 25-year-old Gooden found himself the starting power forward of LeBron's doomed 2007 Cavs. The fourth overall pick of the 2002 draft pulled down an impressive 8.5 rebounds in 28 minutes per game, averaging 11.1 points.

Hughes was infamously the highest-paid player on the 2007 Cavs, who got swept by the Spurs in the Finals. Unfortunately for LeBron, Hughes was that squad's second-best scorer and playmaker. That season, he averaged 14.9 inefficient points, 3.8 rebounds, 3.7 assists, and 1.3 steals per game. He got traded midway through the following season.

[dx_custom_adunit desktop_id="RTK_K67O" mobile_id="RTK_5yk0"] Though he might forever be associated with his infamous screwup, J.R. was once a valuable piece for the Cavs. In his first two postseasons with the Cavs, which resulted in a loss to the Warriors in the 2015 Finals and a seven-game win over them a year later, Smith averaged 12.1 points, shooting 39.6 percent on a healthy 7.5 attempts from deep per game.

Despite such a reputation for being yelled at that Barack Obama even joked about it, Chalmers was a great fit at point guard for LeBron's four seasons in Miami — an effective defender who took care of the ball and knocked down threes, shooting 38.7 percent from deep in that span.

Though he spent more than a decade as LeBron's teammate, Varejao played in just one Finals with him, in 2007, due to injury in 2014-15 and a trade midway through the following season. At 24, he was still a valuable defender back then, and averaged 6.8 points and 6.7 rebounds in 23.9 minutes per game.

Before he became one of the league's most comically overpaid players, Mozgov was an important piece of the Cavs. Following a midseason trade in 2014-15, the center was instrumental in the Cavs' run to the Finals, averaging 10.6 points, 7.3 rebounds, and 1.8 blocks in 26.5 minutes in the postseason, where they fell to the Warriors. He saw his role diminshed a year later when Cleveland avenged that loss.

The Hall of Famer may have been in the twilight of his career, but that was still a wildly valuable player. He hit the biggest shot in the 2012-13 Heat's Finals victory over the Spurs, and continued to be a reliable deep threat the following year. He averaged 10.3 points on 39.8 percent shooting over two seasons in Miami.

[dx_custom_adunit desktop_id="RTK_K67O" mobile_id="RTK_5yk0"] Though his game and minutes took steps back in 2017-18, Thompson was big for the Cavs' Finals runs the previous three years, playing arguably the best basketball of his career in their 2016 Finals win over the Warriors, when he averaged 10.3 points on 63.6 percent shooting, 10.1 rebounds, and 0.9 blocks in the seven-game series.

In Battier's first two seasons in Miami, LeBron won his first two championships. Though his contributions didn't always show up in the box score, the veteran forward's defense, intelligence, and solid outside shooting made him a key cog over three years. He shot 38.2 percent from deep in his Heat tenure.

[dx_custom_adunit desktop_id="RTK_K67O" mobile_id="RTK_5yk0"] Love missed the Finals following his first season in Cleveland, suffering an injury at the hands of Kelly Olynyk in the first round of the postseason. But he was huge in the Cavs' 2016 run to the championship, coming up with a key defensive stop down the stretch of Game 7 of the NBA Finals. He's averaged 17.1 points and 10 rebounds per game in his Cavs career, hitting 37.7 percent of his threes.

Kyrie dropped 23 points and six dimes in Game 1 of the 2015 NBA Finals but left the game in overtime with a fractured kneecap, knocking him out of the series. He was huge in Cleveland's victorious Finals a year later, averaging 27.1 points, 3.9 assists, and 2.1 steals per game and hitting the series' defining shot.

The big man sacrificed more than LeBron and Dwyane Wade when the trio joined forces in Miami, and he transformed himself into a dependable interior defender whom the Heat could rely on as a third scorer. In four seasons as LeBron's teammate, he averaged 17.3 points, 7.4 rebounds, and a block per game.

[dx_custom_adunit desktop_id="RTK_K67O" mobile_id="RTK_5yk0"] Though their skills and desires to have the ball in their hands overlapped, Wade and his good friend coexisted swimmingly for their four years, four Finals trips, and two championships together on the Heat. As LeBron's running mate, Wade averaged 22.2 points, 4.7 assists, 1.6 steals, and 0.9 blocks per game.