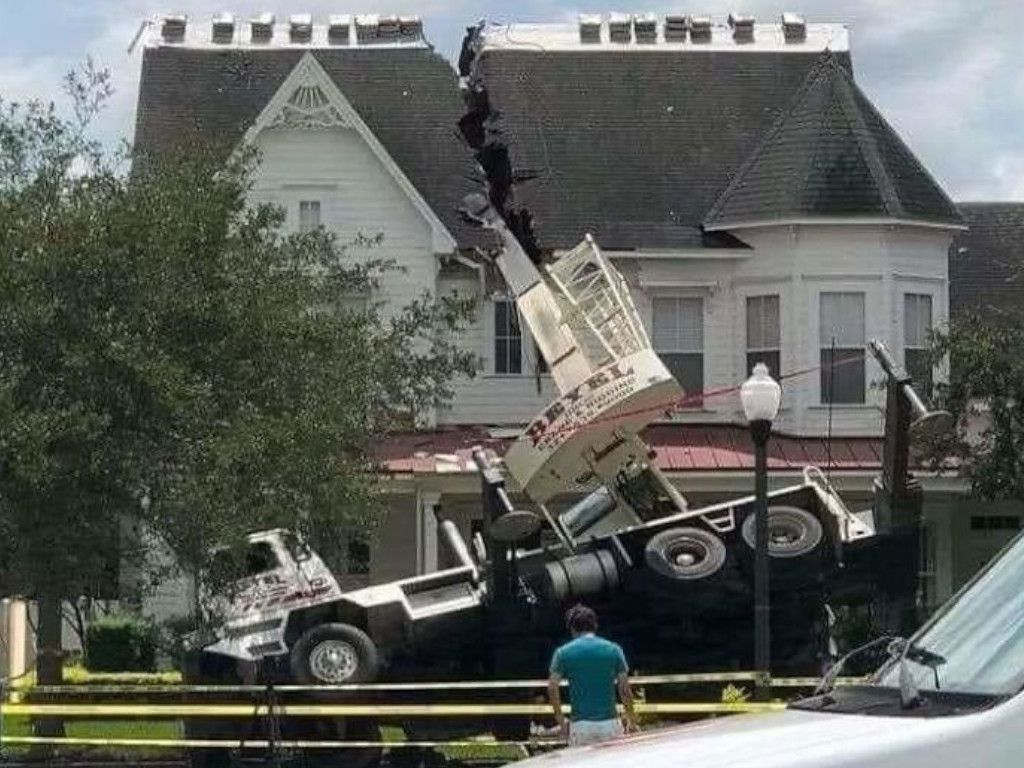 We’ve all had moments we’re not proud of like the time we dropped a bottle of wine on the floor or when we accidentally flung the remote control at the TV and destroyed the screen. Mistakes happen all the time, but these people’s accidents weren’t just really bad but they were also really, really, REALLY expensive!

The thought of someone sticking 5,000 Canadian dollars in a microwave sounds utterly nuts, but someone thought it was the best way to sterilize the bills. Unfortunately, it burned the bills and made them unusable. On the bright side, they’re disinfected, alright!

This Sportscar Shouldn’t Have Tailgated Bus

There’s a reason people shouldn't tailgate, which is something the owner of this sportscar ended up finding out the wrong way. That school bus must have hit their brakes rather suddenly, but the car was driving too close and wound up under the bus. We’d hate to see the estimate on this repair job!

Guy Gets His Drill Tangled in Cables

This guy was trying to drill a hole in the ground with a massive auger drill bit. But he didn’t realize that there were cables underground, so when the drill went in, the cables got coiled around it and now that poor guy will have to spend the next year untangling his drill.

Anyone who was looking to get to work this day probably had a hard time telling their boss that Mother Nature hurled a massive landslide over this highway that blocked the path in every possible direction. Whoever has to clear this mess up has their work cut out for them.

This is what an F-16 looks like after it’s come under heavy fire. But the aircraft wasn’t in a battle. A technician fired a Vulcan Cannon at it by mistake and destroyed the F-16. Clearly, that cannon could use a safety lock of some kind.

At a glance it might look like the planes are hovering above the clouds, but the sky doesn’t have floating hangars or a shed outside. Of course, this isn’t a cloud. It’s fire suppression foam, which someone released by accident and flooded the entire hangar bay.

They Tipped This 290 Million Dollar Satellite

This work crew is going to have a lot of explaining to do after they accidentally toppled a NOAA-N Prime satellite causing it to crash onto the shop. And given that this satellite is worth about 290 million, it’s safe to say heads will roll.

A Crane Rips a House in Two

This truck lost its balance somehow and tipped over. Unfortunately, it was also equipped with a crane, which crashed right through the roof of this Florida home. Essentially, it ripped the house nearly in half. Can we say lawsuit?

This Self Hiding Garage Wrecked a Truck

This self-hiding garage turned into a total nightmare when the owner forgot that their truck was parked on top of it. So, when they pressed a button to raise it, the truck got sandwiched between the garage and the rooftop.

This Car Got Beached

There’s a reason why people don’t generally park their cars by the beach’s shores and this is it! This truck is sinking as it were standing on quick sand while the vehicle owner and spectators struggle to figure out how to save it.

Cement Truck Poops All Over Car

We’ve heard of birds dropping their business all over a car’s exterior, but this is so much worse. The cement truck accidentally unloaded a bunch of its cement on the hood of the car parked behind it. Clearly, someone’s getting a ticket for this mishap.

These Solar Panels Got Snowballed

The bad thing about solar panels is that while they provide renewable energy, they’re not shatterproof. So, during a freak storm, hail crashed into the solar panels and ripped through them like papier mache.

30 game consoles and more than 2,000 games went up in smoke, literally, after an unexpected house fire. And while losing a home is bad enough, for a gamer it has to be pretty devastating to lose the main things that made them happy.

This Guy Lost His Boat, Jeep and Raptor Truck

Realizing his $300,000 boat was sinking, he tried attaching it to this Jeep and Raptor truck in a desperate attempt to keep it from sinking further. Unfortunately, the vessel proved to be too heavy, and it dragged the vehicles into the water, too.

These types of slides are onboard planes used by flight attendants in the event that passengers need to slide down a landed plane during an emergency. But this slide accidentally opened while it was inside the plane. Fortunately, there were no passengers sitting in that cabin.

Watch Out for the Wave of Wine Bottles

Was it an earthquake or just bad luck? Well, whatever caused this, the wine bottles on the wall came crashing down like a wave. And we can almost feel the pain of this wine enthusiast as he assesses the damage alongside his faithful dog.

Rag Ripped to Shreds Into Engine

Mechanics work with rags all the time to clean engine parts or touch objects that might be too hot or sticky. But this mechanic left their rag inside the engine and when the vehicle was started, it destroyed the rag and undoubtedly caused damage to the engine.

The homeowner had recently installed a series of solar panels, but they weren’t expecting a stray bullet to come crashing down out of the sky. Well, it did, and it caused some serious damage to one of the panels and undoubtedly, his wallet as he had to get the panel replaced.

Tractor Truck Meets Its Match at the Beach

This tractor truck discovered that life is a real “beach” and so did the truck operator who was forced to watch as the truck started sinking further and further into the sand. Then again, anyone with common sense should know that this happens to heavy objects if they stand too long in wet sand.

Oh, the horror! Someone accidentally shattered this bottle of wine in half. And we say accidentally because no one in their right mind would intentionally shatter this Chateau Mouton Rothschild which is worth $16,000.

Who said there’s no such thing as boat crashes? These two cruise ships seemed to have been docked near the shore but something went wrong with the boat on the left and it wound up crashing into one of the middle decks.

In July 2014, a train derailment caused a couple of brand-new Boeing 737 fuselages to fall off a cliff and into the waters of a Montana river. So, basically, the fuselages got turned into instant submarines.

One of a Kind Piano Gets Dropped

We’ve heard of movers dropping things, but this is insane.  A bunch of movers are undoubtedly getting their pay docked for the next 25 years, or they might get fired after they accidentally dropped a one-of-a-kind grand piano worth $194,000 and destroyed it.

There’s a reason why only an experienced professional is allowed to operate an MRI machine. But judging from this photo, someone had the machine’s setting’s too high, turning it into a huge magnet that sucked everything towards it, including the technician’s career.

It looks like these drivers may have been illegally car racing on this highway when the crash happened. We sure don’t envy the work of that insurance investigator, but it’s safe to say that someone’s insurance premium is about to go up.