25 Facts You Didn’t Know About “Frasier” 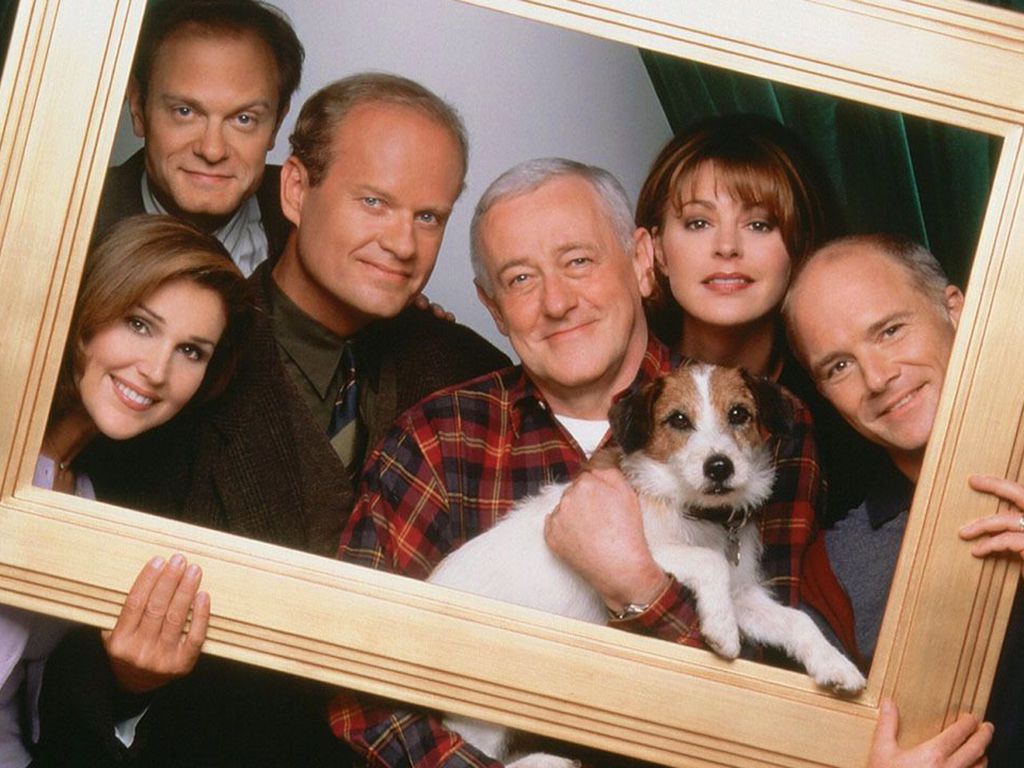 On air for eleven seasons, "Frasier" followed the life of a radio advice show host, played by Kelsey Grammer, as he navigated his career and life with his estranged father and brother.

The show and the numerous awards its cast won over the eleven years the series was on the air contribute to the fact that a reboot is being highly considered. Below are some interesting facts that even some Frasier-fanatics might not know about the critically acclaimed sitcom.

First introduced as a temporary addition to the "Cheers" cast, Dr. Frasier Crane earned himself a spin-off series in 1993. Wanting to avoid "crossover syndrome" and having numerous cameo appearances to deal with, the network behind "Frasier" decided to set the show in Seattle instead of keeping its roots in Boston.

Kristie Alley is the only member of the "Cheers" cast to not make a cameo appearance on "Frasier." The reason for her absence was that her steadfast belief in Scientology contradicted Frasier's psychiatric practice and therefore she "would be unable to appear on the program." According to the Sun Sentinel, the show's co-creator David Lee stated that his response to her statement was "I don't recall asking."

Going in a Different Direction

The original pitch for "Fraiser" was completely different from the end result. Peter Casey, a writer for "Cheers," came up with the idea for Grammer to play a Malcolm Forbes-esque character who owned a magazine empire. The character, a motorcycle enthusiast, would have suffered a tragic accident that left him paralyzed from the waist down and cared for by a "street-smart nurse in a Manhattan penthouse" according to Mental Floss. NBC was taken aback by the idea and President of Paramount TV John Pike regarded it as "one of the worst ideas I've ever heard in my life" and considered the pitch "not funny."

The Finer Things in Life

Furnishing the iconic "Frasier" apartment came with a hefty price-tag. The Coco Chanel replica sofa was covered in 24 yards of Italian suede roughly costing $15,000. The Pastoe sideboard was purchased for $3,200 while the Wassily chair cost $1,395. Overall, the set designers spent $500,000 to complete the layout of the room.

Sing Your Troubles Away

The catchy "Tossed Salads and Scrambled Eggs" theme song, sung by Kelsey Grammer, subtly referenced things one would encounter in the psychiatric field. The two foods are "mixed up" like Crane's patients who dial in to his radio station to vent about their problems, hence the "I hear the blues a-callin" line.

Well-known for his impressive acting career, Grammer's personal life wasn't equally as glamorous. He lost his grandfather to cancer and in 1968, his father was brutally murdered during a home invasion. In 1975, his sister was kidnapped, raped, and murdered, triggering Grammer's substance abuse issues, which were fueled by guilt. In June 1980, he lost both of his half-brothers during a scuba diving incident in which one failed to resurface and the other suffered an embolism. As much as these events have haunted him, Grammer admitted in an interview with iHeartRadio that he considers these tragedies "as part of life."

Kelsey Grammer's substance abuse issues threatened to upset the show and in 1996, the actor was arrested for driving under the influence when he flipped his Dodge Viper. The incident led him to seek treatment at the Betty Ford Clinic and resulted in the episode "Head Games" having to be rewritten to feature Niles taking over Frasier's radio program while the main character was away at a convention.

Fearing Grammer's behavior might jeopardize not only the show but the actor's life, the cast decided to stage an intervention. John Mahoney, who played Frasier's father Marty, remembered the moment in 2004 as "the hardest thing I've ever done in my life." Peri Gilpin, who played Roz Doyle, recalled having to be taught to "keep our emotions back and be honest" when it came to telling Grammer to change his ways. Production for the show was cancelled for a month while the actor got sober and two years later, Grammer won the Emmy Award for Best Actor in a Comedy and gave a heartfelt acceptance speech thanking his costars who "told me there was a way out" of the "very dark time in my life."

Originally, Niles and Martin weren't going to be on the show at all. According to "Cheers," Frasier was an only child whose father had died years ago. The writers decided to change canon by introducing a fiercely competitive younger brother and laid-back, blue-collar father. After seeing a picture of David Hyde Pierce that resembled Grammer in his youth, the network executives were eager to cast him as Niles. They won over John Mahoney, who was their ideal actor for Martin, by FedEx-ing him a hastily-written script for the pilot episode that "was the best by far" in a line of scripts the actor had received before accepting the role.

One of the main backstories of the show is the relationship between Frasier and Martin which turned into the show's "sweetest, most hopeful long-term arc." Martin is first introduced as a disgruntled old man who has lost everything in his life and has to move into his son's apartment. Having been distant for so long, the three men slowly rebuild themselves into a united family and Frasier comes to realize, as Grammer stated in an interview with Vanity Fair, "wow, my dad's a better man than I ever knew."

Gone But Not Forgotten

On February 4th, 2018, John Mahoney died from complications due to throat cancer. During his time on "Frasier," he earned two Golden Globe Nominations and two Emmy nominations. After his passing, Kelsey Grammer posted on his Twitter an image (above) of him embracing Mahoney and referring to him as "my father."

The character of Roz Doyle was inspired by one of the producers of "Wings," another show that Grammer appeared on as Frasier. In 1991, Doyle lost her battle with breast cancer and to honor her memory, the writers of "Frasier" decided to name the feisty radio show producer after her.

One of the executive producers of "Frasier" tragically died during the 9/11 terrorist attacks. David Angell and his wife Lynn were headed back to Los Angeles from Boston when their plane flew into the North Tower of the World Trade Center. As a tribute, characters Niles and Daphne named their son David in the season finale.

Though he eventually won the heart of Daphne, the actor behind the role of Niles was keeping a major secret from his fans. For 11 seasons of the show, Pierce kept his homosexuality a secret despite being in a relationship with Brian Hargrove since 1983. The actor finally came out in 2007 and married his long-time partner in 2008, just days before the adoption of Proposition 8. Dan Butler, known for playing macho man Bob "Bulldog" Briscoe on the series also kept his sexuality a secret until he came out during his one-man cross-country play "The Only Thing Worse You Could Have Told Me..." Since coming out, Butler has become a strong activist for the LGBT community.

A Fish Out of Water

David Hyde Pierce, who played Niles Crane, has an uncredited role attached to his name in the form of providing the voice of Abe Sapien in the 2004 version of "Hellboy." In an interview with Doug Jones, who played the physical embodiment of Abe, the actor stated Pierce "wanted the character to be mine so he declined taking the credit in the film." Pierce remained absent when it came to promotional interviews for the film and even declined an appearance during the film's premiere. He also refused to lend his voice again when it came to animated spin-off films with the intention of having Abe Sapien be "Doug's character" and wanting "to leave it that way" according to Horror.com.

While playing the same character for 20 years was enjoyable for Grammer, another role he was delighted to play was Beast in "X-Men: The Last Stand." Transforming into the lovable blue fur-ball took roughly three hours in the make-up chair and resulted in a character the actor felt was "underused" according to Screenrant. Grammer revealed to CBR that the original director Matthew Vaughn "was insistent that I play the part" and for the first time in 20 years, he auditioned for the role. With the character becoming so close to his heart, he immediately agreed to make a cameo appearance in "X-Men: Days of Future Past" and has made numerous statements that he would be delighted to reprise the role if given the opportunity.

One would assume the main character of the show would receive the most fan mail but it turns out the unexpected fan favorite of the series was Eddie the dog. The Jack Russel Terrier, named Moose, proved to be the "goodest boy" after being rescued by professional trainer Mathilde de Cagney due to his outgoing personality and enthusiasm for constant learning. After the end of Season 7, Moose retired and the role of Eddie was taken over by his son Enzo.

Despite being mentioned throughout the series, Niles' ex-wife Maris never makes an onscreen appearance. Due to her various descriptions, ranging from "very exotic" to "so white, she's almost blue," the producers thought it was best to never cast an actress considering she wouldn't be able to accurately portray such imaginative and outlandish traits.

Even die-hard fans may have missed one special easter-egg about the show. The delivery man who brought in Martin's chair in the pilot episode returns in the finale to take it away. Played by Cleto Augusto, he is the only character (aside from the main cast) to make a reccuring appearance.

Before she landed the role of bubbly blonde Phoebe on "Friends," Lisa Kudrow was actually slated to play Roz Doyle. While the producers loved her humor, they quickly came to realize during rehearsals that she lacked the forcefulness to stand toe-to-toe with Grammer. After failing to win the test audience during the show's pilot episode, Kudrow was fired and replaced with Peri Gilpin.

Casting Martin's live-in nurse Daphne proved difficult. NBC was anxious to cast Jane Leeves and initially Grammer was hesitant because he wanted to avoid references to the British housekeeper from "Nanny and the Professor." To see if she had what it took to be on the show, Grammer escorted Leeves into Angell's office and did an impromtu script read with her. After a few minutes, he left the office and while walking by the producers, announced "she's in."

Despite growing up in North London, Leeves had to work with a voice coach to achieve a convincing accent from Manchester. Concerned with being understood by their American audience, the show received some criticism from their UK viewers when it came Daphne's voice.

Frasier's list of desperate guest callers contains numerous celebrities ranging from Christopher Reeve, Linda Hamilton, and Patti LuPone to Ben Stiller, Elijah Wood and Kevin Bacon. Even top names in the fashion industry like Tommy Hilfiger and Isaac Mizrahi were clogging up the phone lines eager to speak with Dr. Crane. All together, 137 celebrities made voice cameos and each one can be found on IMDB under "Frasier's Guest Callers."

Over its eleven seasons, "Frasier" won 37 Primetime Emmy Awards and earned Grammer and Pierce each four Emmy Awards. The show was voted the "greatest international programme of all time" by the British Film Institute TV 100 in 2000 and in 2004, ranked #34 on TV Guide's "50 Greatest TV Shows of All Time."

The Doctor is In

In this age of reboots and revivals, the likelihood that "Frasier" will return to television isn't too farfetched. In an interview with Esquire, Grammer stated that if it were to happen, "it's not going to be the same Frasier— it's going to be the man in his next iteration." He also revealed to Deadline that "six different ideas" were being tossed around as far as the direction the new series would go in.