25 Classic Movie Lines That Weren’t In The Script 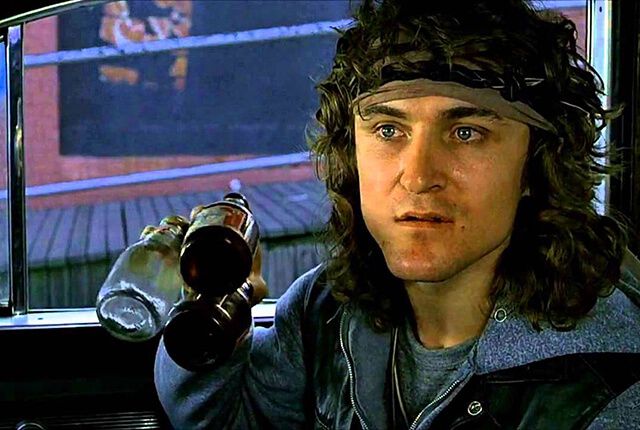 Believe it or not, some of the all-time most memorable lines of movie dialogue were completely unscripted. In fact, they often just randomly came to the actor or actress in question. And producers thought the ad-libs were so good that they ended up keeping it. In all of the cases we present here, keeping the unscripted dialogue was a smart choice. All of these improvised movie lines became iconic, and made their films truly epic.

During "Midnight Cowboy," 1969, the film crew didn't get a permit to close the street while filming. So, when a real cab driver pulled up next to Dustin Hoffman and Jon Voight while filming, Hoffman screams "I'm walking here!" Which producers decided to keep.

"Here's Johnny!" was never in the script for the film "The Shining," 1980. It was actually a genius improv by Jack Nicholson who was inspired by Ed McMahon's introduction of Johnny Carson on the late night talk show.

Singing In The Rape

In "A Clockwork Orange," 1971, Alex, played by Malcolm McDowell, starts singing "Singing in the Rain" during a horrible rape scene, which just popped into McDowell's head, and was eventually kept so that the character Alexander could identify Alex at the end of movie.

Give Arnie A Break

The beat up T-800 protecting John and Sarah Connor in "Terminator 2 Judgment Day," 1991, spat out the all too human line, "I need a vacation." Actually, Arnold Schwarzenegger came up with that line based on the description of how his character looked in the scene.

In the film, "Aliens," 1986, the late Bill Paxton's character, Private Hudson loses his sh*t after the xenomorph takes out some of his space marines. So realizing that defeat was eminent, his character blurts out the improvised line "That's it man, Game over, man! Game over!" on the spot!

Cabbie With An Attitude

In Martin Scorsese's "Taxi Driver," 1976, Robert De Niro has a conversation with his own reflection in the mirror and says "you talking to me?" The line was never in the script, but became one of the most re-used improvised movie lines in movie history.

In "The Warriors," 1979, the script called for actor David Kelly's Luther, the gang leader of the Rogues to antagonize the Warriors, a rival gang. Luther was supposed to cling some bottles, but decided to ad-lib by shouting "Warriors, come out and play!"

In "The Godfather," 1972, Peter Clemenza tells Rocco Lampone to "Leave the gun, take the cannoli." The cannoli part, which is an Italian dessert, was improvised after actor Richard Castellano recalled his wife's character reminding him no to forget to bring home the cannoli.

In "Jaws," 1975, Roy Scheider's Chief Brody says "You're gonna need a bigger boat", after the great white rears its ugly head right in front of him. This became one of Hollywood's most famous improvised movie lines.

The late John Belushi did a lot of improv work during the cafeteria scene where he stuffed his face and then punched his cheeks in "Animal House," 1978. But his "I'm a zit-get it?" Line became so memorable and made the film such a classic hit.

You may have heard of the classic line that Bogart delivers in the film "Casablanca," 1942, after looking into his co-star's eyes, "Here's looking at you kid." This line like many other of his speeches were improvised but forever cemented in Hollywood film history.

In "Ghost", 1999, Whoopi Goldberg's character wasn't the only one rambling when she first met Molly. It was Whoopi herself who put her own unique spin on the line "Molly, you in danger, girl." This undoubtedly helped her land an Oscar for the film.

The Worst Sound Ever

Lloyd, (Jim Carrey’s character on "Dumb & Dumber," 1994) asks if anyone “wanna hear what the most annoying sound in the world is”. Afterwards, Lloyd lets out an unscripted scream that I swear in the name of all things unholy, totally sounded like a cow with its t*ts trapped in a meat grinder.

How To Spot A Nazi

In "Indiana Jones and the Last Crusade," 1989, Indy asked his dad, played by Sean Connery, how he knew Dr. Schneider was a Nazi. But when Connery blurted out, "she talks in her sleep," everyone on the set busted out laughing, and Steven Spielberg decided to keep it in the film.

The Portal To Improv

In "Being John Malkovich," 1999, Malkovich storms off after an argument with the character Schwartz. Then, a drunken extra throws a can at Malkovich and screams "Hey, Malkovich! Think fast!" When the can hits him, he screams out in pain. Guess what? None of which was scripted.

He Stole What From You?

In "Good Will Hunting," 1997, Matt Damon reads a letter to Robin Williams off camera while Williams pretends to read it. Then Williams blurted out "son of a b*tch stole my line!" Damon grabbed Director Gus Van Sant in shock, but the line was immortalized in the film.

During an exchange with David Duchovny's J.P. Prewett, Ben Stiller's Derek Zoolander forgot his line. So he decided to repeat his last line "But why male models?" which threw Duchovny off, but the director found it worth keeping in the hilarious 2001 film, "Zoolander".

He Didn't Do It

Tommy Lee Jones corners Harrison Ford at the reservoir determined to bring him to justice for allegedly killing his own wife in "The Fugitive," 1993. Then Ford declares that he didn't kill his wife, to which Jones improvs with the line, "I don't care."

One of Matthew McConaughey's first roles was in "Dazed and Confused," 1993, where he blurted out "Alright, Alright, Alright," which was inspired by Jim Morrison saying the word four times in the "Doors" live album. So, it went from being his first line to an iconic catchphrase.

When Princess Leia finally tells Han Solo that she loves him in "Star Wars: The Empire Strikes Back," 1980, Solo replies, "I know", which wasn't in the script. Harrison Ford was asked to come up with something he knew his character would say… and he hit it on the mark.

In "A Nightmare on Elm Street 3: Dream Warriors," 1987, Robert Englund delivers the nightmarishly good improv line, "welcome to prime time, b*tch!" After popping out of a TV set and using it to kill one of the Elm Street kids.

Any "Star Trek" fan knows that Dr. McCoy's nickname on the show was "Bones". So, in the 2009 reboot film, Karl Urban improved the line "All I've got left are my bones," which under the circumstances, J.J. Abrams totally approved according to the movie's audio commentary.

In "Silence of the Lambs," 1991, Anthony Hopkins ended his line, "a census taker once tried to test me. I ate his liver with some fava beans and a nice chianti," with a "Hsssssss". This added to Hannibal's creep factor, and stunned co-star Jodie Foster, so the director kept it.

When Billy Crystal said to Meg Ryan "I would be proud to partake of your pecan pie," in "When Harry Met Sally," 1989, Ryan found it laugh out loud funny. Ironically, director Rob Reiner liked the unscripted line, and signaled to her to go with the flow in this amazing rom-com.

In "X-Men: First Class," 2011, Hugh Jackman's Wolverine was supposed to growl "F*ck off". But instead, Jackman decided to add a little flair to the very first F-bomb used in the X-Men movie series by growling "Go f*ck yourself!"