Jen Arbues
The Most Violent Deaths In Comics To Make You Squirm In Your Chair December 8, 2017 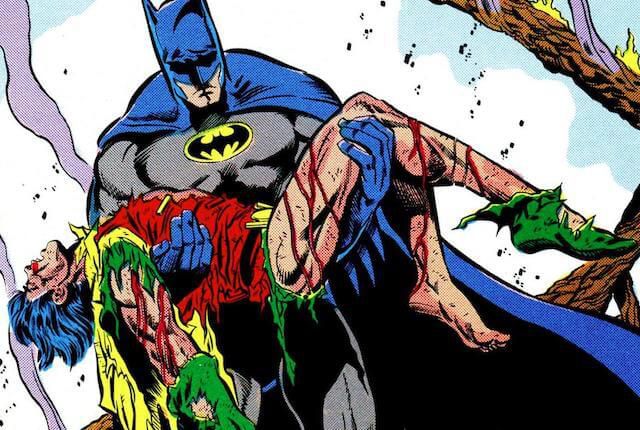 The comics world isn’t exactly famous for its subtlety. Particularly not when it comes to the deaths of its characters. Comics have given us some of the most deranged, twisted and gruesome deaths ever imagined. And we can always count on our favorite comics writers and artists to bring the most violent comics deaths to life on the page. Even if we won’t ever get to see them translated to the big screen. So here are the worst offenders in the comic universe.

Yes, we know Superman didn’t exactly stay dead, but this ‘90s storyline gave us one hell of an epic battle. It nearly destroyed Metropolis altogether, and it’s so important to the Superman legacy that Zack Snyder included his own take on it in last year’s “Batman v Superman.”

The Corinthian is one of Dream’s creations in Neil Gaiman’s “Sandman” series who has mouths for eyes and enjoys spending his free time eating the eyes of numerous victims and attending serial killer conventions. Nightmare fuel, for sure.

Rorschach isn’t really the nicest “hero” in comics, but he definitely didn’t deserve to be completely disintegrated at the hands of Dr. Manhattan. And all just for having good f—ing detective skills.

You know what would be the worst possible way to die? Being sodomized with a jackhammer. Yep. We’re pretty sure that hits No. 1 for us.

Like many other comic characters, Jason Todd (aka Robin) didn’t stay dead for long. But in “A Death in the Family,” readers were subjected to the horrifying crowbar beating of Todd by the Joker, ending with the former being blown (presumably) to pieces.

In an attempt to stop an anti-matter cannon set to destroy the world, Barry Allen runs as fast as he can to create a speed vortex. Problem is, he runs so fast that he literally disintegrates into dust, proving to readers that pacing oneself is of utmost importance.

Monty is a great example of what happens when you cross the Joker. Being skinned alive is anything but funny, but it shows just how demented Joker can be when he puts his mind to it.

For all the shit that Joker has put other DC characters through (see previous), it seems only fair that he get a taste of his own medicine. Enter Superman, who decides to take his frustration out on the Clown Prince of Crime by punching his fist all the way through his chest.

Hershel Greene’s family in the comic series “The Walking Dead” differs slightly from what we saw on AMC. Mainly, TV viewers missed the part where his twin daughters, Rachel and Susie, were slaughtered by prison inmate Thomas, only to then have their decapitated heads shot by Glenn, because walkers.

Even in black and white, seeing someone’s head bashed into pulp is gruesome AF. But this wasn't just violent; by the time Glenn died, he had become like family. His was a totally heartbreaking death.

In “Preacher,” Rev. Jesse Custer becomes possessed by en entity with god-like powers, giving him the ability to make people do anything he says. Before that, though, the whole possession part manages to obliterate Custer’s entire congregation. But hey, you win some, you lose some.

Leave it to Alan Moore and Eddie Campbell to bring one of the world’s greatest unsolved cases to its most macabre pinnacle. “From Hell” tells a tale of Jack the Ripper in black and white, which is somehow even worse than seeing murdered prostitutes in full color.

In the “Old Man Logan” storyline, Hulk may be a cannibalistic monster with a taste for adamantium, but he’s no match for Wolverine’s healing factor and “Alien”-like chest-burster moves. Takes indigestion to a way different place.

A few years ago, Marvel thought it would be fun to have Deadpool kill its entire universe. We’re pretty sure Spider-Man was less pleased with being shot in the face than the comic giant.

Kevin is a little like the Frank Miller version of Ramsay Bolton, so we were all for his dismemberment and subsequent death. One thing’s for damn sure, though: Don’t ever get on Marv’s bad side.

In another “So-and-So Kills the Marvel Universe” storyline, Spider-Man again winds up on the wrong end of a bullet. Punisher is known for being hyper-violent as is, so we certainly feel a little bad for ol’ Spidey when his brain gets plastered all over the sewer walls… but just a little.

Nitro has arguably one of the coolest super villain superpowers in the Marvel universe, in that he can make himself explode and put himself back together. In a fight against Wolverine and S.H.I.E.L.D. agents, this power became especially handy, when he actually blew them all into oblivion.

The problem with being a kick-ass assassin is that it’s hard to recognize when you’re out of your league. Punisher failed to see what he was up against with Daken, which left the door open to him being dismembered, piece by piece, and left in a gutter to rot. Of course, it would be Wolverine’s son.

Sometimes being on the winning side comes at a steep price. In the case of Sentry vs. Ares, it’s at the price of Ares’ body being torn in half. The level of gore depicted in his death is pretty unbeatable, and came as a bit of a shock for Marvel fans, who got to see it in all its full-page glory.

The Blob v. The Wasp

It’s one thing to know that the Wasp was cannibalized by the Blob, a grossly overgrown monster of a man. It’s quite another to actually see it happen, pimpled skin and all. The demented look on Blob’s face is one we’re sure will be permanently etched into our brains for all eternity.

There’s just something a little disconcerting about a young girl decapitating a full-grown woman, villainous intent aside. One thing we do know: Hit-Girl can certainly take a punch or two (or a few dozen) without being down for the count. U.S.A! U.S.A!