Movies With Interspecies Romances To Creep You Out (Or Entice You, Weirdo)

Greg Smith
Movies With Interspecies Romances To Creep You Out (Or Entice You, Weirdo) February 21, 2018 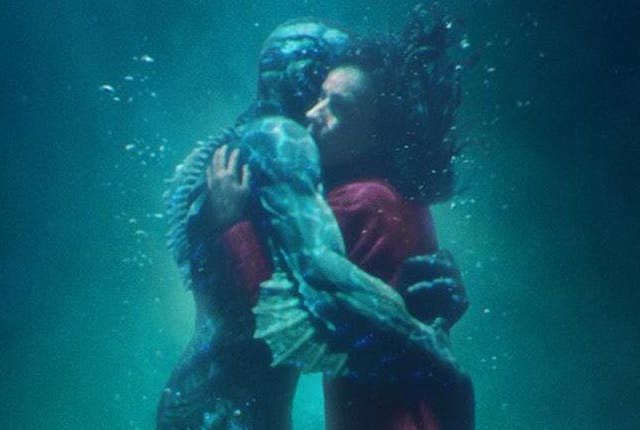 The Shape of Water

Nominated for 13 Academy Awards, including Best Picture, Director, Screenplay, and Actress, Guillermo del Toro's fantastic vision of interspecies romance deserves all its acclaim and thensome. It paints a tender, aching portrait of loneliness and reunion, of two souls who always belonged together. Del Toro directs it like he'll never get a chance to direct a movie again, and if he doesn't (he will), it's a helluva swan song. Maybe his next film can be about falling in love with a swan?

Amanda And The Alien

Was I the only person who watched this film on UPN as a kid? The only person who, intrigued by the suggestive ads leading up the broadcast, sat through a cheap, bizarre film about an alien man and his female lover? The only person who furrowed his brow at chopped and censored sex scenes that included, of all things, cinnamon play? My guess is "probably." But it's forever lodged in my brain, where useful facts could've lived. CPR, for example. Amanda And The Alien lives where knowing CPR could have lived.

Randall wants to get his best friend Dante something special for his going away party. He settles on booking a private "donkey show" -- what a friend, huh? In a twist, "Kinky Kelly And The Sexy Stud" refers to, respectively, the donkey and the human man who publicly "expresses his love." With modern eyes, this entire sequence, particularly the presupposition that a woman having sex with a donkey is "more fun," reads super problematic.

How do a sentient teddy bear and a flesh-and-blood woman sustain a relationship? And what if they want the traditional trappings of American domestic life -- kids, pets, white picket fences? Inexplicably (and rather clumsily), Ted 2, the Seth MacFarlane sequel about a vulgar bear and his silly friend, tries to tackle these issues between Ted and his human wife Tami-Lynn, turning into a pseudo-commentary on civil rights.

If you've ever wanted to see Willy Wonka get it on with a sheep, I've got a movie for you! Based on the best-selling book of the same name, Woody Allen's (sigh, ugh, I know, sorry) silly comedy features a series of sexual vignettes, including Gene Wilder's tryst with a sheep. Wilder imbues his performance with a genuine sense of pathos -- it's downright inspiring to see him genuinely fall in love with this sheep.

Did you see the Wachowskis' big-budget sci-fi fever dream Jupiter Ascending? Of course not, and you should keep it that way -- it's astonishingly awful. Its emotional center is a budding romance between Mila Kunis' human character and Channing Tatum's half-human-half-dog character. The two actors -- what's the most polite way to put this? -- have absolutely zero chemistry together.

As a comedian and filmmaker, Bobcat Goldthwait pulls no punches. So when he decided to tackle an interspecies romance, he did so with frankness and an honestly edgy lack of tact. Sleeping Dogs Lie is about a woman who harbors a secret about, well, a sex act she committed with a dog. When people find out, their reaction is a little "ruff!" Sorry, I'll show myself the doggy door.

Planet Of The Apes

In Tim Burton's misbegotten 2001 remake, Mark Wahlberg's astronaut character falls in love with Helena Bonham Carter's ape character, and the two share a kiss. The movie ends with Wahlberg realizing it was Earth all along, but this kiss is still the more emotionally upsetting scene.

Vase De Noces goes by a more, um, "blunt" title, one that I will leave for you to Google. Suffice it to say, it sums up the plot of the movie accurately -- a disturbed man falls in love with and has sex with a pig. The pig gives birth to piglets who prefer their pig mom, and the man goes insane with rage, to tragic ends. Only the strongest of stomachs will be able to make it through this weird, weird film.

"He makes me laugh." With one line, the sultry Jessica Rabbit explains what he sees in her goofy husband Roger. Maybe the rules in Toon Town are different, but Jessica and Roger qualify as an interspecies romance under normal circumstances, being a woman and a rabbit respectively. Yet with everything else going on in this classic flick, you just kind of buy it and move on.

Director James Cameron made the two highest-grossing films of all time. Number two, Titanic. Number one, Avatar. Both films are centered around a romance that struggles to bloom under intense circumstances. In Avatar, it's that Zoe Saldana is a member of the Na'vi species, whereas Sam Worthington is a human being in a Na'vi "avatar." Does their love transcend the conflicts around them? Let's just say they never let go.

The Sword In The Stone

The Sword In The Stone is ostensibly a fun Disney film about the King Arthur myth. So why in the heck is there a brief sequence teaching children the futility of love and ubiquity of heartbreak? When Merlin turns a young Arthur into a squirrel (?), a female squirrel falls in love with him. However, Arthur cannot reciprocate, as he is just a human visiting. We are then forced to watch this poor, female squirrel become absolutely devastated, her cartoon eyes dripping off her fur. Thanks, Disney!

At least in this Disney film, the interspecies romance is requited. Oh wait, but the gender politics of a woman willing to do absolutely anything to gain the attention of a man, including eliminating what's essential to her identity (particularly her voice!) reads incredibly problematic in this day and age. Again, I say, thanks, Disney!

Normally, if all parties involved are happy and no one is hurting anyone, I do not believe in judging love. But in the case of any version of King Kong, where the romantic elements are largely left subtextual, I do have many logistic questions regarding the love between a giant ape and a normal human woman. For example -- wouldn't it be annoying to always lose a fight by being picked up?

There are many icky things going on in the romance between Lea Thompson and Howard The Duck. Why does she find this cigar-chomping monstrosity so appealing? Why is their romance so quick? And why, when they're about to consummate the relationship, does Howard look toward the camera as if he doesn't want this to happen? What are you making us watch, George Lucas?!

What if The Little Mermaid was told from the perspective of the man? Ron Howard's light and frothy interspecies romcom takes this simple premise, adds in the eternal charms of Tom Hanks and Daryl Hannah, and runs with it. The forthcoming remake pulls another gender-flip, with Channing Tatum playing the merman, and Jillian Bell playing the Hanks-equivalent.

It might be cheating to include this film, since Jeff Goldblum's character begins as a human when he falls in love with Geena Davis. But as the film goes on and their love story deepens, so does Goldblum's grotesque transformation into, you guessed it, a fly. Director David Cronenberg crafts a dream sequence that posits what their kids might look like, and as you might expect, it's pretty grim.

In the original television series, it became something of an absurd joke that Captain Kirk would constantly bed attractive, alien women. Thus, in J. J. Abrams' reboot, they nodded to this character trait in a clever, lightswitch-aided visual gag. It looks like Kirk is trysting with a beautiful, human woman, but when the lights flick on -- surprise, she has green skin!

In the expansive universe of the Muppets, it is completely normal that a pig and a frog would be in love. In The Muppet Christmas Carol, this fact is taken to a logical extreme, as we see the offspring of Kermit and Miss Piggy, which includes the film's version of Tiny Tim. God bless us, everyone!

In her breakout role, Natasha Henstridge plays a vicious alien killer, borne into existence by government gene splicing. Her goal is simple: mate with a human male to produce offspring that can take over the world. Hot take: Species is a campy, bonkers, utterly feminist sci-fi horror masterpiece, the cotton candy to Alien's steak dinner.

The cons of sleeping with an alien who also bears a freaky resemblance to your dead husband: Pretty self-explanatory. The pros? If he looks like mid-80s Jeff Bridges, I mean... You know what, Karen Allen? You do you. You get yourself some of that Starman.

If you're going to simultaneously revere and skewer the cultural frenzy surrounding Star Trek, you need to walk a delicate line among many tropes. When director Dean Parisot tackled the previously mentioned device of Kirk getting with sexy alien ladies, he did so simply and brilliantly. By shifting the human-alien romance to a laconic Tony Shalhoub, who is not the captain, and an eccentric, affection-initiating Missy Pyle, whose tentacles betray typical conventions of human beauty, Parisot's parody shifts into hyperspace.

In cult sci-fi hit Splice, a kind of spiritual gritty reboot of Species, Adrien Brody and Sarah Polley develop a female, humanoid creature based on genetically modified and spliced DNA. Polley feels maternal instincts toward the creature, named Dren. Brody has sex with the creature in a barn. Then, in an audacious final act, Dren transforms into a male and rapes Polley, impregnating her. Is this movie good enough to earn such a moment of transgression? For me: pretty much nope!

Thus far, these films have tended to be flights of fantasy and sci-fi, or at the very least fictional. In Zoo, a documentary, we see the real thing. Kenneth Pinyan had a sexual relationship with his horse, resulting in his death. The doc sensitively explores Pinyan's life, friends, and loved ones in a matter that neither condemns nor condones. If you've got the constitution, it's a fascinating watch.

Beauty And The Beast

Apparently, a member of another species kidnapping a young woman and trapping her in a house full of magical prisoners until she succumbs to Stockholm Syndrome induced infatuation is a "tale as old as time." I would rather not be this film's guest, thank you!